November 24 2014
15
With increasing flight speeds in aviation the transition from the use of the direct wing to the swept one became quite natural. This fact is well known. However, from both the layout and the aerodynamic points of view, the use of CBS, the reverse sweep wing, was seen as a much more attractive solution. Work on aircraft with such a wing was carried out in many countries. For example, in Russia such a project was the Su-47 (S-37) Berkut fighter. In the United States, a similar machine was created by Grumman Aviation Corporation (since 1994 Northrop Grumman). The experimental fighter was designated Grumman X-29.

It is known that on airplanes with a straight sweep wing, the oncoming flow of air flows from the root to the tip and forms two powerful whirlwinds that descend from there. In this case, the resistance that is created by the wake (the air flow in the form of vortices, which breaks off the wing tips of the aircraft in flight) is called inductive. In the case of KOS, the overflow occurs in the opposite direction - from the tip to the fuselage, while the co-current jet has a lower intensity, which leads to a significant decrease in inductive resistance. In this case, the location in the zone of action of the wake-up jet behind the wing of the reverse sweep of the small surfaces of the aerodynamic control leads to an increase in the maneuverability of the aircraft.

The fact that the aircraft with KOS has a significantly smaller margin of static stability also contributes to an increase in the maneuverability of the aircraft. This is achieved due to the fact that the aerodynamic focus of an aircraft with KOS is much easier to combine with its center of mass, rather than in the case of using a straight sweep wing. Another advantage of this scheme is that it is possible to more evenly distribute the lifting force over the span, which in turn leads to a simplified calculation of the wing and contributes to the improvement of controllability and aerodynamic qualities. 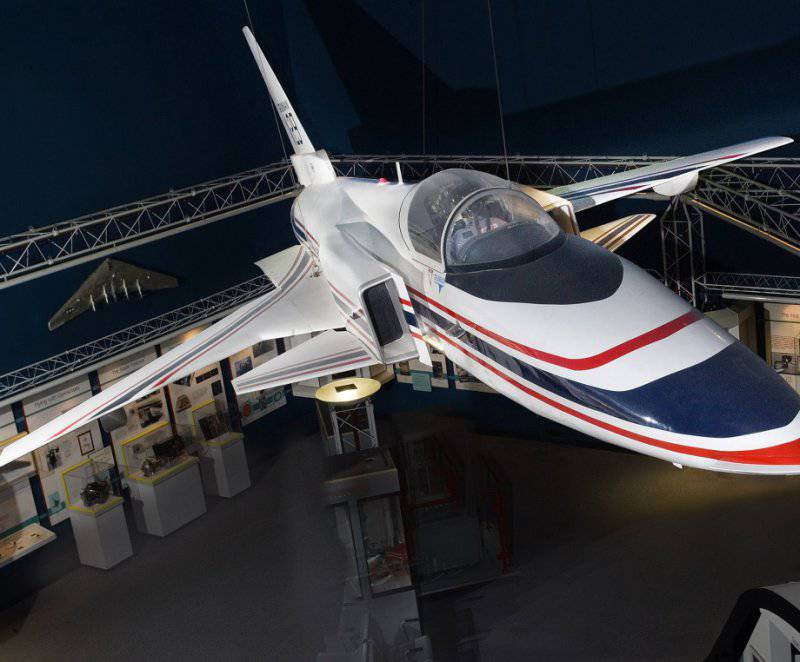 The layout advantage of the WWTP in the development of passenger, military or transport aircraft is that the massive wing spar is located far behind the center of mass of the aircraft, where the passenger compartment or bomb bay is located. All these facts were known to designers and scientists in the years of the Second World War. Back in 1944, an experimental aircraft was designed in Nazi Germany - a heavy bomber Ju-287 with a backward-swept wing. This prototype, due to the low priority of the program and the large number of problems that arose during the work on them, did not go beyond the framework of ordinary, albeit flying, prototypes.

What prevented the realization of knowledge? The backward swept wing was actually implemented on a few samples of aviation equipment. The fact is that the backward-swept wing had one, but very overwhelming drawback: this wing is a very unstable design in terms of reinforcement. Under the action of air flow, the reverse sweep wing tends to bend. This process has received the designation of aerodynamic divergence. You can fight this process by making the design of the reverse-swept wing absolutely rigid. But this decision in turn led to a sharp increase in the mass of the aircraft. Therefore, for many years the idea of ​​an aircraft with KOS could not get a logical development and embodiment in the metal.

Beginning with the 1977 year, the United States began to conduct research that was aimed at studying promising schemes for highly maneuverable combat aircraft. This program was carried out under the guidance of DARPA. In 1980, Grumman, General Dynamic, and Rockwell created projects with backward-swept wing aircraft. To substantiate the configurations presented by them, tests of models of aircraft in wind tunnels were conducted. After reviewing the submitted projects, DARPA chose Grumman. In December, 1981, the company received a contract for 80 million dollars, which provided for the construction of two experimental aircraft, which received the designation Grumman X-29A. 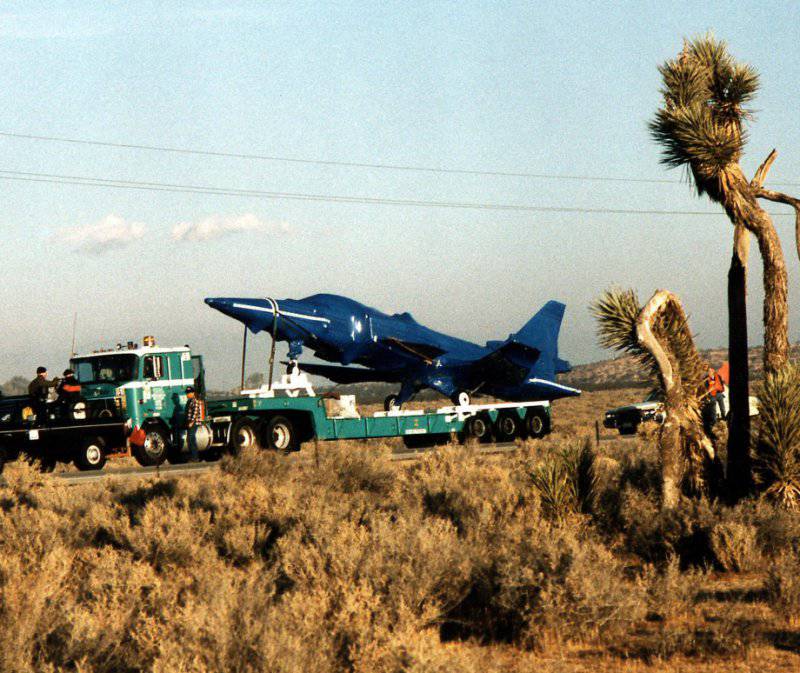 Experimental aircraft Grumman X-29A was built using aerodynamic "duck" and with a wing sweep back. In addition, the aircraft received a full-circle front horizontal tail (GIP), which could aerodynamically interact with the wing of the aircraft. The front wing spar was made of titanium alloy using electric welding. The rear spar, as well as the transverse and longitudinal force sets were made of aluminum alloy. Three wing ailerons were located throughout the wing span.

It was CBS that was the highlight of the X-29A. In the root part, it occupied the length of the 2 / 3 aircraft fuselage. The strength of the wing was achieved through the use of welded caisson from titanium and other light alloys. The upper and lower wing linings were made one-piece from a special material CFRP (carbon-reinforced plastic). At the ends of the wing, the skin was glued together directly from 156 layers of this material. This skin had a very high level of strength with a fairly small mass. The sweep of the wing on the fourth chord was equal to 34 degrees, while the wing was able to withstand even very high loads.

The X-29 semi-monocoque fuselage was made of aluminum alloys. The cockpit canopy opened up and back with the help of special hydraulic cylinders. The cockpit was sealed, it installed the Martin-Baker ejector seat GRQ7A. On the sides of the fuselage of the car, starting from the root of the wing, there were nodules, which ended in deflectable guards to control the eddies, which descended from the wing of the aircraft. In addition to this, the flaps could be used to facilitate the detachment of the aircraft's nose-wheel at take-off, increasing the lifting force when the aircraft approaches the landing, as well as with the PGO and the hanging ailerons to balance the car. The keel and plane of the aircraft were also made of aluminum alloys. 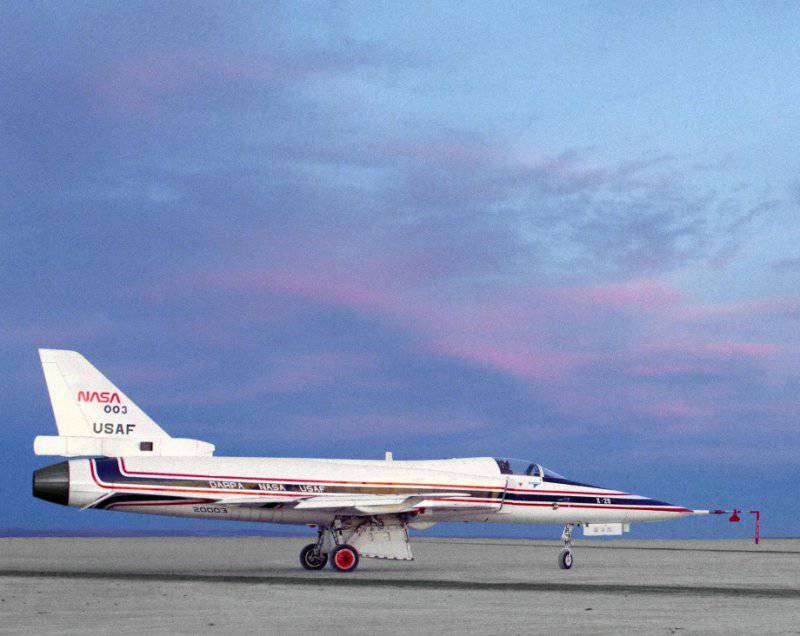 The chassis of the experimental aircraft was made three-point, with one-wheel racks. The chassis was equipped with oil-pneumatic shock absorbers of the Menasco company, as well as pneumatics and wheels of the Goodrich company. All racks of the aircraft landing gear were removed by turning forward. The plane used side flat air intakes. As a power plant, the engine used was General Electric »F404-GE-400, possessing a two-shaft scheme and a degree of bypass 0,34. The stock of fuel was located in two soft tanks in the aircraft fuselage, as well as in compartments-tanks in the root of the wing. Above all, the plane had an auxiliary power unit, which provided the drive for emergency generators and hydraulic pumps.

On board the Grumman X-29, a special digital EDSU was installed - the Honeywell electrical control system of the company, which has threefold redundancy. Initially, the X-29 had a statically unstable layout that allowed it to maneuver very intensively. At the same time, the EDSU provided the aircraft with artificial stability, carrying out a coordinated deflection of the CG, fuselage covers and ailerons. Also on the plane was installed full-fledged radio-electronic equipment, which included the Lytton LR-80 spatial course system and other navigation equipment. In addition, the plane had the Teledyne RT-1063B / APX-101V identification system and the Magnevox AN / ARC-164 communications equipment operating in the decimeter wavelength range. The inertial navigation system appeared on the second experimental sample.

An important task in the development of X-29 was to reduce the cost of the aircraft. For this reason, the company Grumman widely used in the construction of units and components of existing machines: the nose landing gear and cab from the F-5A Freedom Fighter, the main landing gear and fuel tanks from the F-16 Fighting Falcon, the power plant was a "half" version such on the F / A-18 Hornet, hydraulic filters from the Grumman E-2C aircraft. 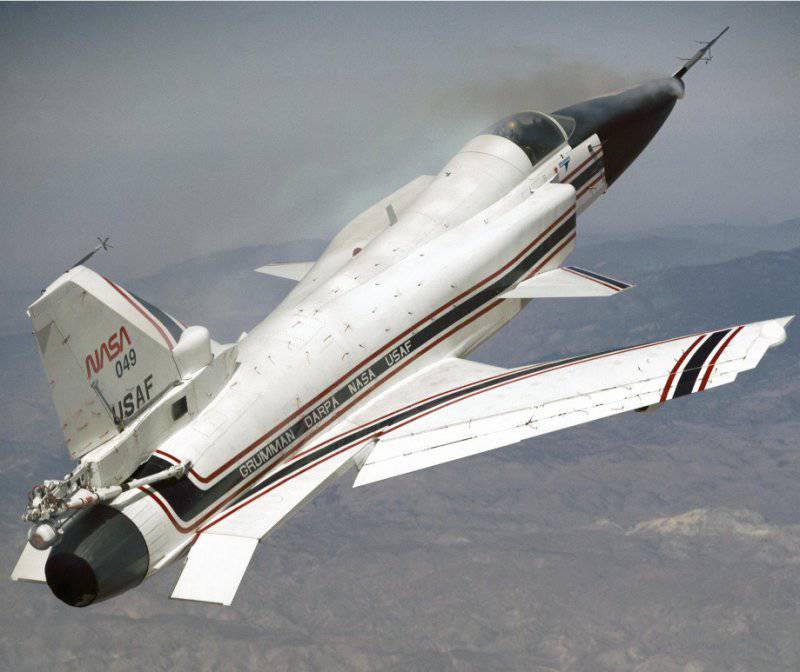 Experimental aircraft Grumman X-29 was designed to fly at a relatively small supersonic speed, the static stability of the machine in flight was provided by artificial means. The first flight of the aircraft made 14 December 1984 of the year. The X-29А aircraft was used to carry out the initial assessment of the piloting and flight characteristics of an aircraft with a forward swept wing. The correspondents who covered his flight were delighted with the new aircraft and its appearance. Journalists who are accustomed to the traditional type of jet aircraft with a straight swept wing, even believed that the aircraft was flying backwards. In this case, the plane flew quite intensively. Sometimes he made up to 4 flights per day, on average, he performed 8 flights each month. During the test flights, the aircraft was able to reach the maximum height of 15 500 meters, speed M = 1,47 and angle of attack 22,5 degrees. It was also possible to achieve an overload in 6,4g (80% of the calculated maximum value) during the execution of forced turns.

Flight tests of the experimental aircraft confirmed the results that were already obtained while performing purges in wind tunnels. The machine did not fall down in flight, even with very large angles of attack, and retained the ability to commit a controlled roll, even at sufficiently low flight speeds. In the autumn of 1988, the first aircraft took part in a series of tests, the main purpose of which was to evaluate the combat maneuverability of the aircraft as part of the United States Air Force's database development program, which would quantitatively compare and determine the maneuverability parameters of aircraft.

The second plane, Grumman X-29, performed the first flight of the 18 in May, 1989. It was used to conduct research on the borderline of maneuverability during flights at high angles of attack. On this plane managed to reach a very high angle of attack - 67 degrees. Also, the potential customer of the American Air Force estimated the suitability of the “duck” scheme with a backward-swept wing and with three surfaces controlled by pitch - wing steering surfaces, PGO and fuselage shields. Also evaluated were the capabilities of the CBS aircraft to achieve a high angular velocity of rotation and roll control when flying at high angles of attack. Experimental machine could maintain good handling at angles of attack to 45 degrees. 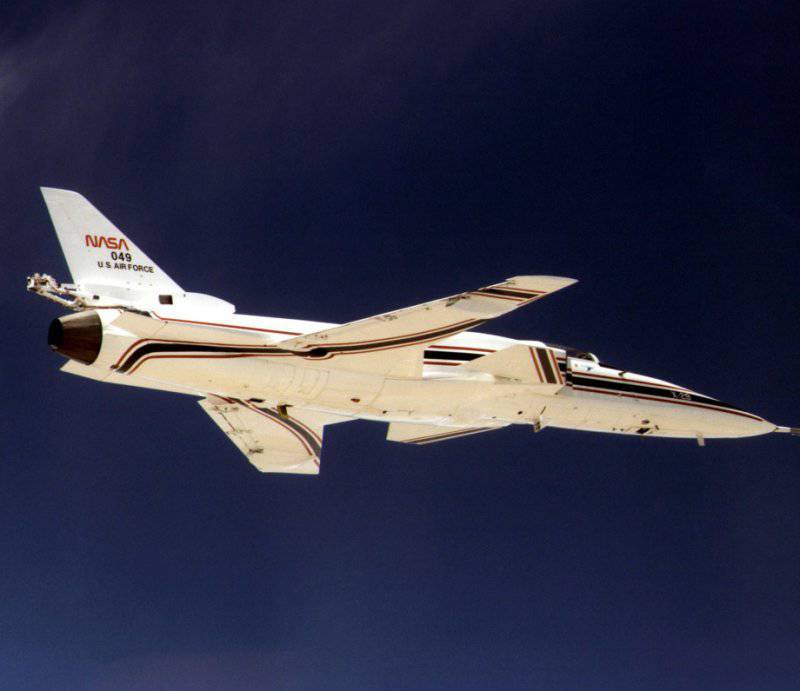 However, in the future, it was decided to abandon the use and continuation of tests of the Grumman X-29 aircraft. The ideas of building a combat aircraft with a forward swept wing were not implemented either. The reasons were that the aerodynamic advantages of the use of KOS, from the point of view of the American military, were not as high as expected. In addition, during the implementation of the program, serious difficulties were identified with the creation of an EDSU for such an aircraft due to the presence of serious difficulties in eliminating cross-connections when operating the machine. On top of that, during the development and testing of Grumman X-29, emphasis was placed on the requirements for new combat aircraft: supersonic cruising flight speed came to the forefront while maintaining a sufficiently large maximum speed and reduced visibility. At the same time, when using CBS, the maximum speed characteristics deteriorate due to an increase in wave drag at supersonic flight speed.

The total cost of the program for the creation and testing of two experimental aircraft was about 250 million dollars. At the same time, the test program of the first X-29 ended December 2 1988 of the year after making 254 flights, the second - September 30 of 1991 years after making 120 flights. The total number of flights thus reached 374. This is more than for all other American aircraft with the letter X in the index. Currently, the aircraft are used as exhibition samples. 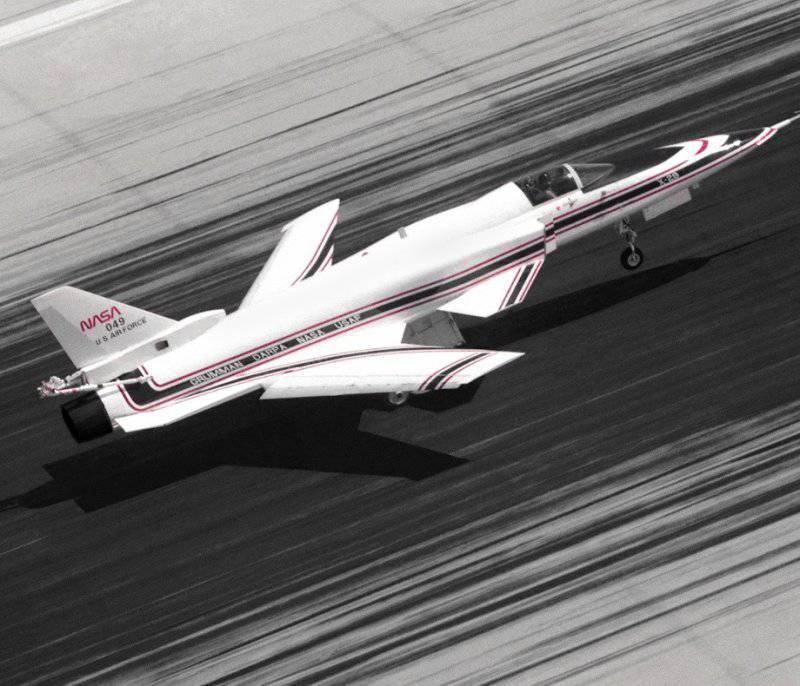 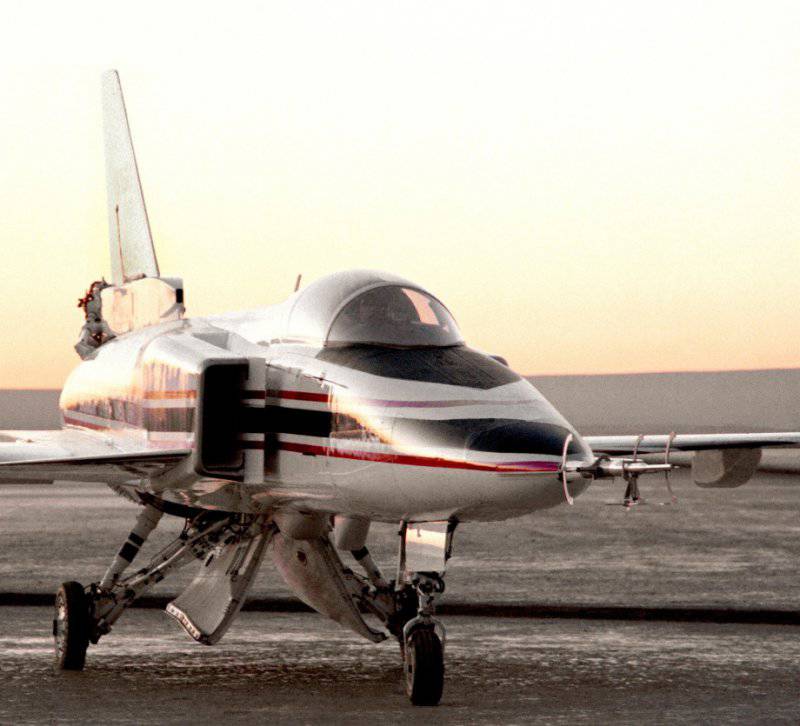 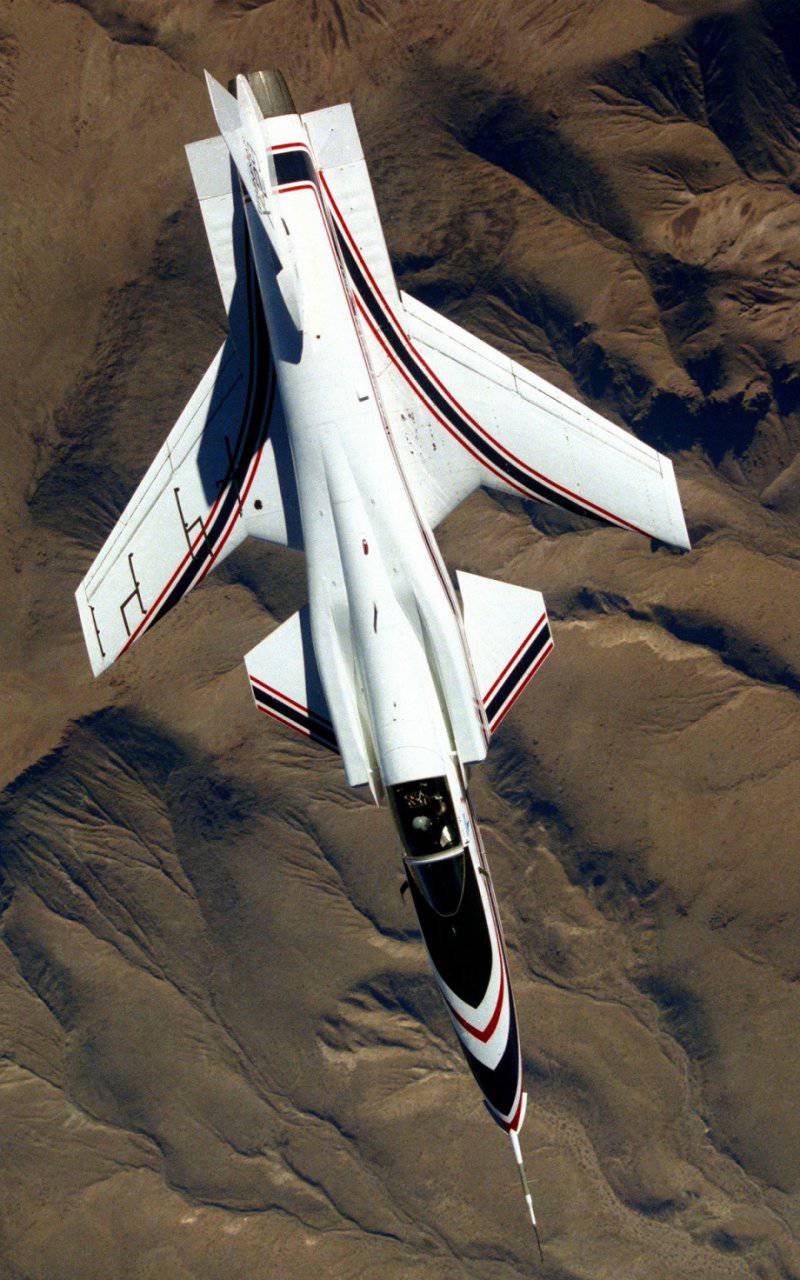