About the possibility of the "London scenario" in Russia 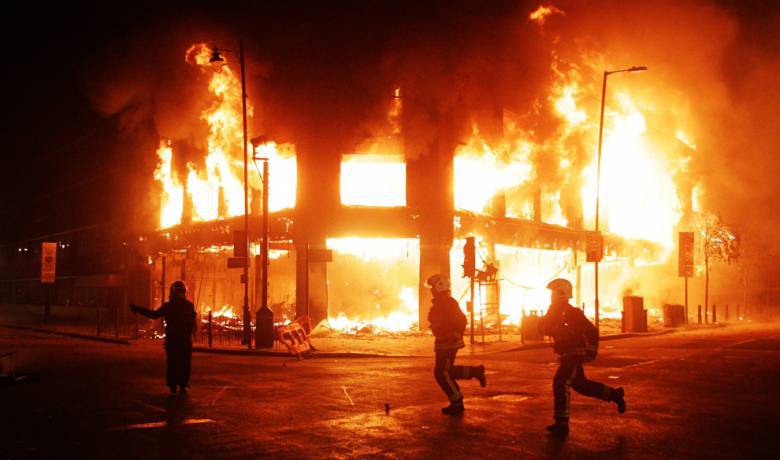 The events in London, in a number of other cities in Europe, and the events in Paris in 2006, make it necessary to assess the presence of millions of migrants in the Russian Federation. There is a thought, and can not such events be organized, provoked by any events, in Moscow or other regions of Russia? Russia is currently the world leader in accepting "hardworking" migrants, second only to the United States in this respect.


They are doomed to low-skilled labor, it is clear that if for those who just came from poor provinces, say Tajikistan, for happiness and such work, but for their children who see different standards of living, such a share will not be enough. Conflict can occur from any smallness - in the same Paris, or London, it occurred because of the actions of the police, in the opinion of the migrants, "overcame." And given their large number, organization, the presence of leaders, tools that can become weapons, the danger for citizens may be serious. And law enforcement agencies will have to exert maximum efforts to restore order.

In addition to migrants, in Russia there is a significant percentage of dissatisfied masses, and also marginal layers. So, excluding the homeless and migrants, in Russia there are approximately 5 million people who are carriers of the poverty subculture. It is clear that if he flares up, he, too, will not remain on the sidelines - in any confusion, a different “scum”, a criminal element, emerges.

It should be borne in mind that migrants in Russia are carriers of an alien culture who, even when they receive a view of citizenship, are not going to be fully integrated into society. The logic of many is clear, for example: why learn Russian, if there is a brigadier who communicates with the authorities in Russian, conveying instructions to employees in their native language. They live closed, the circle of contacts is minimal. It is clear that they can not be completely apart from the surrounding life, this is one of the reasons for the rather high level of a number of specific crimes, such as rape. Healthy young men, far from families, or even without wives (they still need to be earned), and around the society that has adopted Western standards of behavior - including fashion-inducing, behavior more characteristic of prostitutes, rather than self-respecting women.


Although a residence permit implies a long-term life in Russia. But migrants do not need either the Russian language or Russian culture, they only need Russian money. At work, the foreman will tell everything for them, ask them the scope of work, they will count the cost in the store, it is not necessary to talk. TV, newspapers, radio in Russian is not necessary for them. Yes, and children in many respects will remain the same isolation - this is an example of the same European countries, and the United States. If earlier white migrants (Irish, Italians, Poles, Jews, Germans, Swedes, etc.) came to the USA, they eventually became Americans in this “melting pot”, then the current migrants are mainly Latin Americans and Asians , retain the old culture, live closed. The United States is already facing the threat of the complete “Istanization” of the southern states.

At the exit, it turns out young people who do not consider Russian culture their own, but dissatisfied with their social status. The ideal breeding ground for rebellion. Moreover, it is even known where the first riots may occur, these are South, South-East and Northeast of Moscow. The similar situation develops in a number of areas of Moscow area. Where "guests" formed almost almost real enclaves, mono-ethnic quarters. Already at present, it is very difficult to conduct operational-search activities among them, and soon a situation may arise where law enforcement forces will simply be afraid to enter these quarters without additional support. For example, we can recall the battles in Brazilian favelas, when the police, in order to eliminate a group of drug traffickers, recruited armored vehicles, helicopters and marines to help. And we should not think that this is a long way away from us, the processes of stratification of society which have been going on rapidly for two decades, the masses of migrants have already led to a considerable polarization of society. The rich already have their own separate villages, with their guards, private security companies, their schools, kindergartens for children, with the presence of poor, “working” neighborhoods in the cities.

Migrant communities have their own formal and informal leaders, their own mob law, their own rules of conduct. These are actually disputes of “microstates”, on the body of our already-sick state. In addition, these people, for the most part, no longer caught the USSR, at least at a conscious age, did not absorb its culture — on the basis of Russian culture and the Russian language. It is completely alien to them, does not affect their mentality. That is, if those who were born during the time of “stagnation” of Brezhnev can be called “their own”, then those who are younger are already carriers of a different mentality. Although our human rights defenders, the liberals still consider them "fraternal peoples." We should forget about this already - most of them, already some kind of “neo-nomads”, completely alien to the Russian culture, the Russian people, who need only resources from us for the survival of their families. Russia's problems do not bother them. They actually "conquer" Russia - people from the Caucasus, Central Asia, Southeast Asia, but not by force of arms, but by "demography." Such processes can be noted throughout the "white world" - the extinction of indigenous peoples, the gradual replacement of their migrants and their descendants. This process threatens the survival of all of humanity, because with the complete assimilation of the white race, the planet is doomed to complete degeneration. The creative potential of mankind will be lost.

According to the Moscow Department of Education, more than 70 thousand migrant children are already studying in metropolitan schools (most of them are from Central Asia, China, Vietnam). And the communal resettlement of migrants has led to the fact that almost a third of students in a number of schools, so far only in elementary school, have a poor command of Russian.

We are in Yandex Zen
Tajikistan in the shadow of China
List of destroyed the largest and most high-tech enterprises
11 comments
Information
Dear reader, to leave comments on the publication, you must to register.