"Italians" against the Japanese 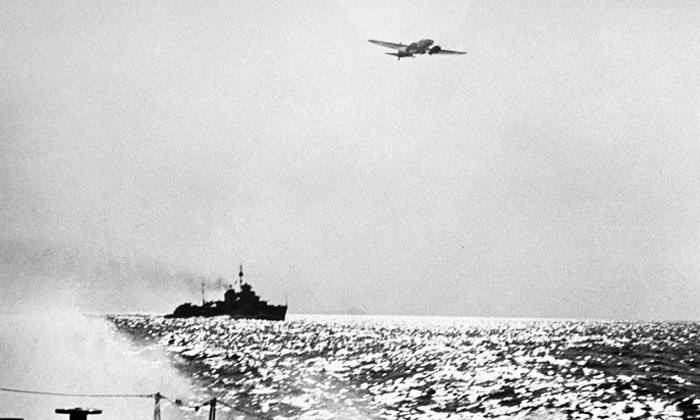 As the "Stalinist falcons" in 1934 dispersed the Japanese squadron

It is believed that the first conflict between the USSR and Japan occurred in 1938, in the area of ​​Lake Hassan. But even 80 years ago, the first provocations began, including at sea. Then the "Stalin's falcons" turned the whole naval squadron of Japan to flight.

History The question began in the years of the Civil War, when the Pacific Fleet, which was already bloodless during the Russo-Japanese War, ceased to exist. Him and Siberian flotilla (or rather, what was left of them) the white emigrants were taken to China and other countries of the Asia-Pacific region. Over the next decade, Japan, on the contrary, has increased the power of its navy to incredible sizes, having four aircraft carriers, 33 cruisers, ten battleships, 100 submarines, more than a hundred destroyers, hundreds of patrol, patrol and other military boats, not to mention the large auxiliary the navy.

Possessing such a truly enormous potential, the Japanese felt themselves in the Pacific Ocean and, in particular, in the Sea of ​​Okhotsk, real masters. This was directly proportional to their more than vigorous economic activity in this region. After all, Vladimir Ilyich Lenin said that politics is a concentrated expression of the economy. So by the end of the 1920-s, Japan actually occupied Kamchatka and its coast, arranging its settlements in the form of bases, trading posts, fish-processing plants, warehouses and other points and areas of economic activity. All their vigorous work very accurately resembled the picture from the 1966 film of the year, “The Head of Chukotka”. Only instead of the Americans (according to the plot of the film) of the locals, the Itelmens, the Japanese were just drinking. Not only that the invaders barbarously caught all that fell into their trawls cleanly, violating all possible conventions and quotas. They also traded the Itelmens for the “fire water” of fur, rare medicinal herbs, and other gifts of nature. They cut down the forest, exterminated the otter, fur seals and other animals. Needless to say that all this vigorous activity was illegal and could not help but attract the attention of the Kremlin. Moreover, the Japanese fishing vessels in the Sea of ​​Okhotsk region were not one or two and not ten or twenty, but thousands! And, to put it bluntly, they simply plundered the USSR, scooping up resources for several million full-value gold rubles every year — which is tens of tons of gold!

There was nothing to resist such an open robbery to the republic, which had just recovered from three wars and revolutions. Several border patrol ships (PSCR) did not solve problems. Moreover, the fishery went under the strict protection ("roof") of the Imperial Navy of the Land of the Rising Sun. It is noteworthy that the Japanese military, while protecting poachers, at the same time actually “squeezed” their own fishing vessels, whose owners honestly bought licenses for legal fishing and crab from Soviet Russia. And forced them to leave the area of ​​fishing, in fact encouraging poaching.

The point of this economic and environmental lawlessness was put by Comrade Stalin, who ordered to transfer to Vladivostok the 66 th separate squadron of twelve airplanes, which was based at that moment on one of the bases of the Black Sea Fleet in Crimea. It was commanded by the komesk Mikhail Parmichev. It is clear that the transfer was carried out in an atmosphere of extreme secrecy. It should also be added that this unit was not quite ordinary and differed favorably from other squadrons in that it "served" flying boats of the Italian Savoy C-62B, which is important for patrolling the sea. Moreover, the range of their flight was a thousand kilometers, and they developed a speed of up to two hundred km / h. "Savoys" could carry bombs, and in case of air combat, they had two twin machine guns.

After acclimatization and the necessary training flights in the fall of 1933, the squadron headed for Kamchatka. All this time, while the pilots were preparing to enter into a confrontation with poachers, the Japanese fishing flotillas continued to fish for seafood in an uncontrolled manner. It cannot be argued that the Soviet border guards absolutely let this process take its course. At any real possibility, our patrol ships carried out the same detention of violators with escorting poaching schooners and drawing up the protocols necessary in such cases.
And in the summer of 1934 of the year, Savoy’s crews finally had the opportunity to prove themselves in the fight against this quiet intervention. During the detention of the next fishing vessel, a Japanese combat squadron appeared on the horizon with clearly not peaceful intentions.

"Savoy" go on the attack

Aware of the seriousness of the current situation, they sent a radiogram to Petropavlovsk-Kamchatsky from the border boat, which carried out the arrest, from where, on an urgent basis, reinforcements of three ships sailed into the sea. The PSCRs that came to the rescue already approached the enemy at a distance of an artillery shot ... And then an incredible thing happened: one of the Japanese destroyers signaled our border guard ships ... to follow him. Neither more nor less. And it is in our territorial waters. Apparently, having been convinced of the fire superiority of their squadron, the samurai believed in their own impunity and finally became impudent, which turned their heads and moved them to capture our ships. Even a person who was not familiar with the law of the sea could not help but understand that this was already a direct violation of all international agreements and laws. And simply speaking - piracy.

And here, at the most tense moment, our Savoy appeared in the sky, which had already been deployed to attack enemy destroyers. A moment later, they had already imitated the bombing of enemy ships. This caused a real panic in the slim ranks of the Japanese squadron. Having forgotten about the potential “prey” - the Soviet border guards, some samurai unanimously rushed where, others described the circles on the waves, fearing that, moving straight ahead, the ship was much more at risk of being bombarded. Moreover, seized by animal fear, Japanese sailors turned on ship sirens at full capacity, appealing for mercy. The fear of the unfortunate warrior was apparently so great that, fleeing towards neutral waters, they went down to the extreme, passing through the signalman: "Happy swimming!".

After this incident, the poaching "raids" on our territorial waters stopped abruptly. 66-I squadron did its important job, discarding violators to be thrust into an alien garden. “Don't open your mouth on someone else’s loaf,” says Russian proverbial wisdom. And in 1934, the "Stalin falcons" explained its meaning to the Japanese military. Then there were the lessons of Hassan and Khalkhin-Gol, which the Red Army taught the militarists. All this taken together, apparently, led to the fact that Japan was wary of entering into a full-fledged war with the USSR in the 1941 year. Well, as they say, having burnt on milk, you blow on the water.