Construction of auxiliary vessels for the Russian Navy

November 21 2014
10
The power of the naval fleet directly depends on the ships carrying a variety of weapons. However, warships cannot operate independently and need a wide range of different support vessels. At present, Russia is implementing a large-scale program for updating the Navy, in which much attention is paid not only to warships, but also to auxiliary ships for various purposes.


In the past few days, a series has been published. News on the construction of new auxiliary vessels for the Russian Navy. So, it became known about the shift in the timing of the transfer of two new auxiliary vessels to the fleet. It was planned to transfer the naval transport of weapons “Akademik Kovalev” of project 20180TV and the ocean rescue ship “Igor Belousov” of project 21300 to the fleet before the end of 2014. Due to some problems, the delivery of new auxiliary vessels was postponed until next year. According to reports, by the end of the year, both ships should go on sea trials. As for the rescue ship Igor Belousov, next year tests of the deep-sea diving complex installed on it are planned. 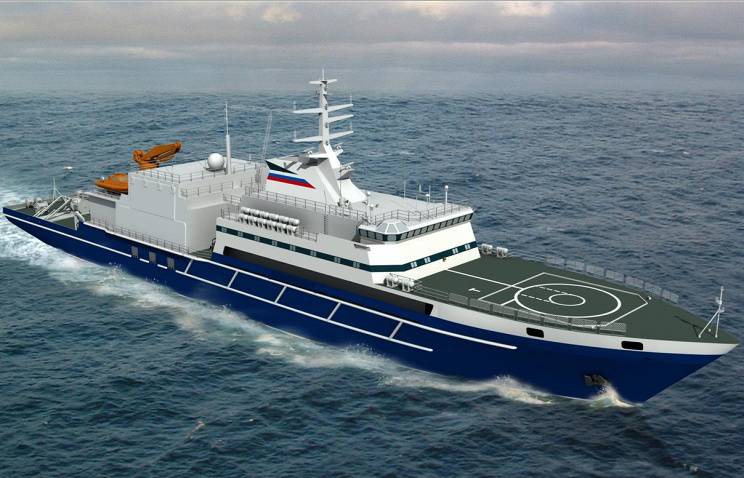 Fortunately, the latest news on auxiliary vessels for the Russian Navy is not just about shifting the deadlines. For the remaining one and a half months until the end of the year, it is planned to transfer to the fleet four boats of integrated emergency and rescue support of the 23040 project and two modular search and rescue boats of the 23370 project. 23040 project boats will be used for various search, rescue, diving and other works. 23370 project boats can also be used to solve various problems, but they have a different design and are built according to the “catamaran” scheme.

At present, there are several dozen auxiliary vessels of various types at different stages of construction. By order of the Navy, transport ships, communications ships and boats, reconnaissance ships, rescue ships and boats, hydrographic ships, etc. are being built. All this technology will be part of the Navy over the next few years.

Delivery of transport "Akademik Kovalev" postponed to the next year. Since the end of 2012, the construction of a second vessel of this type, named Akademik Aleksandrov, has been underway. It should be noted that the 20180TV project, on which weapons transports are built, is a development of the original 20180 project, the purpose of which was to build rescue ships. In 2010, the Northern Fleet received the Zvezdochka ship, built according to this project. The asterisk was the only rescue ship of its project. All other vessels are built on the updated project 20180TV. In total, it is planned to build three such vessels. 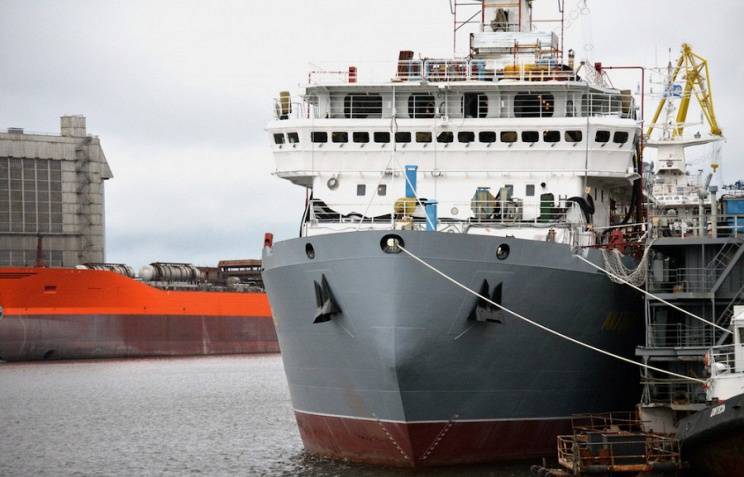 Preparations are underway for testing the communications ship (reconnaissance ship) Yuri Ivanov of the 18280 project. The vessel has already undergone a degaussing procedure and should soon be sailing for the first time. The construction of the second vessel of the 18280 project, “Ivan Khurs”, continues. It is planned to be launched in the 2016 year. In total, the Navy will receive four communications vessels of the new project, which will be distributed between the Northern, Pacific, Baltic and Black Sea fleets. 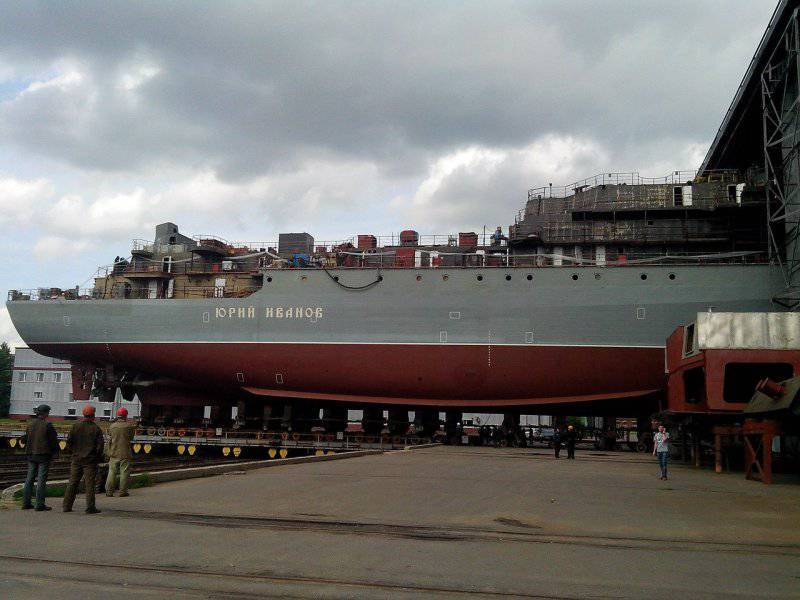 At the end of 2012, the Navy was handed over an experimental vessel "Seliger" of the 11982 project. In December 2013, the second ship of this project, the Ladoga, was laid. Completion of construction and testing is scheduled for 2017 year. The 11982 ships are supposed to be used as platforms for testing various ship systems, weapons, etc. 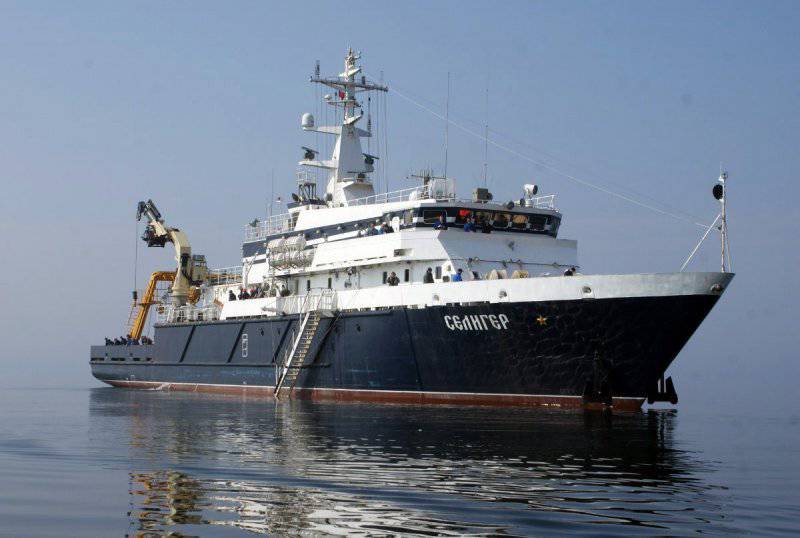 In the middle of June of this year, mooring trials of the oceanographic vessel “Yantar” of the 22010 project started. The ship was built from the middle of 2010 to the end of 2012. The task of the vessel "Yantar" is to survey the seabed and search for various objects. To perform such tasks, the vessel carries a set of special equipment, and also has the ability to use self-contained deep-sea apparatuses. The possibility of carrying a helicopter. 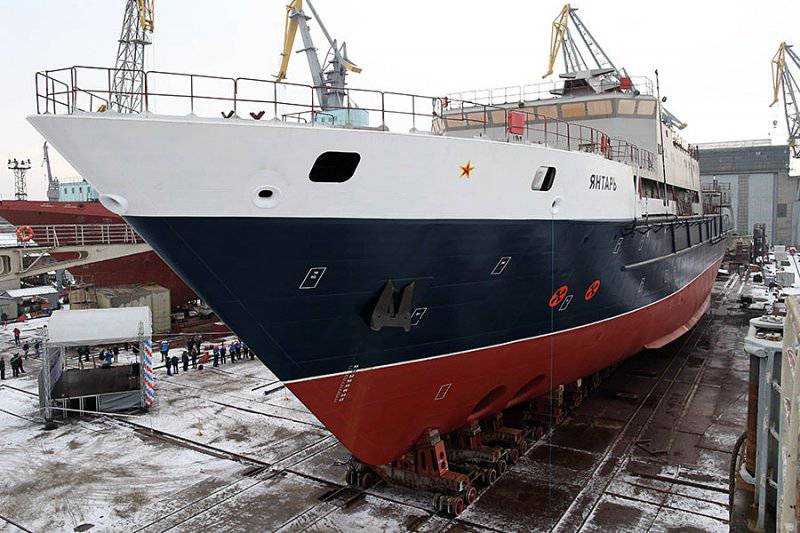 From 2008 to 2013 years, the navy received four large geographic boats of the 19920 project. In the near future it is planned to build and transfer to the fleet four more boats of this type. The first of them is currently being tested and should soon be handed over to the customer. Three other boats are at different stages of construction. Their transfer is scheduled for 2015 year.

The rescue ship "Igor Belousov" of the 21300 project was laid in December 2005 of the year and launched in October 2012. To participate in the rescue operations, the vessel “Igor Belousov” received a deep-sea diving complex GVK-450 with a set of special equipment, in particular with 5 pressure chambers. In addition, the vessel will be able to carry the Bester rescue deep-water craft. According to some reports, the construction of ships of the project 21300 may continue. The need to build four ships of this type was previously mentioned. 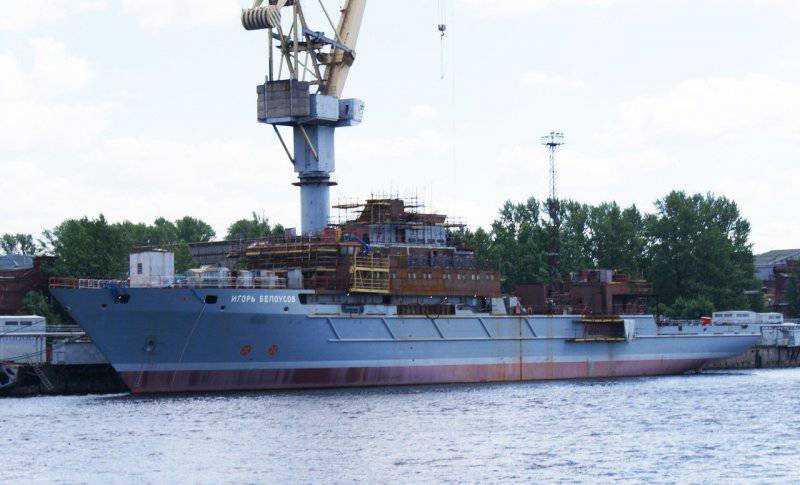 The rescue vessel "Igor Belousov" of the 21300 © project http://forums.airbase.ru

The boats of the integrated rescue support of the 23040 project will become one of the most numerous vessels of the auxiliary fleet of Russia. Four boats of this type are already serving in the Black Sea Fleet, six more have been built for the Baltic and Black Sea Fleet, as well as the Caspian Flotilla. Now five boats are being tested and must be handed over to the fleet by the end of the year. The sixth (RVK-1045) was transferred to the Black Sea Fleet 14 November. In the near future, acceptance certificates for the remaining boats will be signed. A contract has already been signed for the supply of six more boats from the 23040 project, which will serve as part of the Baltic Fleet.

This summer the Baltic and Black Sea fleets received one modular search and rescue boat of the 23370 project. In the very near future, tests of two more such boats, which will serve in the Baltic Fleet and the Caspian Flotilla, should be completed. In the future, eight more boats will be built. The boat of the project 23370 is a catamaran with the ability to install various equipment. Specialized equipment designed to perform various tasks, is mounted in standard 10-or 20-foot containers, mounted on the deck.

Since 2011, tests of the sea tug "Alexander Piskunov" of the 22030 project have been conducted. The vessel is intended for the removal of other vessels from the shoals, as well as for use in extinguishing fires. In addition, the tow can be used to ensure the work of divers. The tug should serve as part of the Pacific Fleet. For several reasons, the testing of the ship "Alexander Piskunov" was delayed, as a result of which it has not yet been transferred to the customer.

Since last year, a series of nine floating cranes of the 02690 project for the needs of the Navy has been built in St. Petersburg. Four cranes have already been launched and are being completed near the wall. Two more are being built in workshops. The first two cranes should be part of the Northern Fleet in 2015. The completion of the entire series will be completed before the end of 2016.

From the autumn of 2012 to the summer of 2014, three vessels of the logistics of the 23120 project were laid, which should be completed and handed over to the navy over the next few years. The task of the ships "Elbrus", MB-75 and "Captain Shevchenko" will be the transportation of various cargoes with the possibility of unloading them to the shore or transferring them to other ships. In addition, 23120 vessels will be able to tow and participate in rescue operations. An important feature of the new logistic support vessels is the ability to sail across the Arctic seas in the summer-autumn period without an icebreaker escort.

The most interesting auxiliary vessel is the floating floating dock “Sviyaga” of the 22570 project. Construction of the dock was conducted from the autumn of the year 2012. Launching took place in November 2014, ahead of schedule. In the near future, the completion of the construction of the dock will be completed, after which its tests will begin. The dock will be able to transport various ships, boats and vessels of suitable sizes. The maximum carrying capacity of the Sviyagi is 3300 t. It is assumed that this floating dock will transport ships, ships and boats on inland waterways.

The difficulties of the past decades have seriously hit the navy of Russia. Due to economic and political problems for a long time there was no possibility of timely repair of existing ships and vessels, as well as the construction of new ones. In recent years, a reverse trend has emerged: it has become possible to build and repair not only warships, but also auxiliary vessels of various types.

Currently, several dozen auxiliary vessels of various classes and types are at different stages of construction and testing. Tugs, rescue ships, multipurpose boats, weapons transports and even floating cranes are built to perform auxiliary tasks. All this equipment is being built in order to upgrade the material part of the four fleets and the Caspian flotilla.

It should be noted that the construction of auxiliary vessels underway is not a fully new undertaking. In previous years, a sufficiently large number of ships were also built, which were transferred to the fleet up to and including 2014. However, in quantitative terms, the current pace of construction is significantly higher than before. This feature of the fleet renewal process can be considered a direct consequence of the implementation of the State Armaments Program, which implies a significant increase in expenditures on the purchase of weapons and equipment.