Grand Prince Svyatoslav and the intrigues of the Byzantines 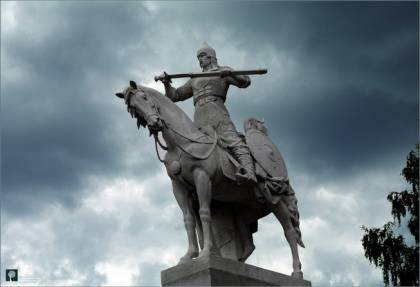 Brilliantly completing the Khazar campaign — setting a new border for Russia along the Volga and the North Caucasus, Svyatoslav did not sit with folded hands and “rest on the laurels of victory”, but took up other no less global tasks. One of them was the need to finally establish itself on the Black Sea, which was already called Russian. He solved this problem quickly, as if in between times. On the way home, his guards marched through the possessions of the Byzantine Empire in Azov and Northern Crimea. With 10 cities and 500 of other settlements, mining was taken. What is interesting, since the population of these places was mixed and a considerable percentage of them were Slavs, they did not resist the prince of Rus. According to one of the Byzantine toparchs (the governor of the province, his name is not история did not save), since most of his subjects "lived according to the customs of the barbarians," when the troops of Svyatoslav were approaching, "cities and peoples voluntarily joined them". Even the local nobility in full force refused to carry out the orders of the toparch and went over to the side of Svyatoslav.


Toparkh had to go to Kiev, where he talked to the prince, he affectionately accepted him, after the Roma expressed obedience, the Russian prince left him the governor of the region, even increased his possessions. Promising his subjects their protection and preservation of former income. This was typical of the Russes of that time - they needed submission, were punished severely for disobedience, and they were not particularly interested in the internal affairs, religion, customs of the local people.

Prehistory of the Bulgarian War

Bulgaria at that time was in great decline. The Great Slavic Power, which took the name of the Bulgarian Turks, and completely assimilated them, covered the land from the Black Sea to the Adriatic Sea, and in the south it reached the Aegean Sea, from the modern lands of Moldova and Albania and Macedonia. The Bulgarian Tsar Simeon the Great (reigned from 893 of the year to 927 of the year) led successful wars with the neighbors - the Hungarians, the Byzantine Empire, the Serbs. The new capital Great Preslav was comparable to the capital of the Eastern Roman Empire, Constantinople. But after his death, three decades of "friendship" and "cultural partnership" with the Romans led to the degradation of a great power. The nobility was greatly influenced by Byzantium, its children studied in Constantinople, the Byzantine fashion was adopted, its progressive social diseases (i.e., due to the old vices). As a result, part of the nobility began to consider themselves "Greeks", the boyars began to betray and change their homeland. Tsar Peter, succumbing to the skillful flattery, behaved like a vassal of the empire.

Soon the illusions of “friendship” with the “fraternal Christian” Constantinople collapsed. Emperor Nikifor II Fok (emperor in 963 — 969 of the year), returning from a victorious campaign in Syria, decided to solve the problem of Bulgaria. Fortunately, she thought that she had already decayed enough and was not ready for a serious war. Peter sent an embassy to him, proposing to marry one of his sons on a Byzantine princess. Nikifor ordered to beat the ambassadors, rudely called them, ridiculed them. He sent an ultimatum, demanding to send his sons hostage. Peter was confused, he tried to solve the matter peacefully, but Nikifor had already started the war - he easily captured the border cities, tried to break through the passes in the Balkan Mountains. But he miscalculated, the simple Bulgarians, unlike the “elite”, did not torture good feelings towards Roma - the Byzantine army met with a tough rebuff at the passes. As a result, instead of an easy victory, the emperor received a new front. And the troops were required in the Middle East to develop success against the Arabs, and in Italy there was a confrontation with the Holy Roman Empire of the German nation. In addition, Svyatoslav captured the Byzantine possessions in the Crimea, this problem also had to be resolved.

Then Nikifor came up with a seemingly brilliant move - you need to push the Bulgarians with the Russians, the perennial policy of "rule and rule." Fortunately, with Svyatoslav he had contacts - the Rus helped him in a brilliant assault on the island of Crete, there is a version that Svyatoslav himself participated in this battle. In addition, the war of Svyatoslav with the Bulgarians would distract him from the Crimea. It will be possible to free the troops for the war with the Arabs and affairs in Italy.

With this mission, the son of Kherson stratigue Kalokira was sent to Kiev, since the Khersonites regularly contacted the Russians, knew their customs and language. He was also given money for a “gift” - 540 kg of gold (15 of gold centaries, 1 centari was equal to 36 kg). Here Nikifor's thoughts coincided with Svyatoslav's interests - he himself was going to strike across Bulgaria, however, with other goals than the Romans suggested, he was not going to leave from there. And he planned to include this land in the power of the Rus. Therefore, the embassy Kalokira accepted graciously.

In 967, the Svyatoslav squads marched, the Bulgarians were warned about it and had time to get ready for battle. The army of the Bulgarian Tsar Peter, as well as units of Kasogs and Yases who fled to Bulgaria, prepared for a battle on the Dniester River, blocking the crossings.

But Svyatoslav was not only a brilliant commander, but also a politician, this time his allies were Hungarians, the old enemies of the Bulgarians. His army, as in the war with the Khazaria, went partly tops, partly in boats. He climbed up the Dniester River, there he joined the Hungarians, after that he forced the river and hit the Bulgarian-Khazar army. The rout was complete. Peter was terrified to call for help to Nicephorus, agreeing to any concessions. But he kept silent, he needed a complete rout of Bulgaria, in order to take it later without a fight.

And the Russian squads continued the triumphant march, Pereyaslavets stormed, the king, not seeing the possibilities of resistance, capitulated. After that, 80 towns of Bulgarians surrendered without a fight. Even at that time, the Romans waged an information war against the Rus - they wrote that the soldiers of Svyatoslav razed the cities of Bulgaria with the land, destroyed the churches, looted all the treasures, carried out mass executions, human sacrifices to their “bloodthirsty” gods. True, according to other sources, the Eastern Slavs (say, unlike the Slavs of Western Europe) did not have such a custom, their gods were sunny, bright, they did not need human sacrifice. And even if we study the Greek sources, it is clear that the Bulgarian cities, the churches remained intact, intact. Yes, the Bulgarians themselves. Somehow strangely they reacted to the "atrocities" of the Rus - most of them supported Svyatoslav, even began to enter his army.

The war did not spread to Western Bulgaria, and Eastern Bulgaria recognized itself as a vassal of Russia. For this, Svyatoslav did not dethrone Peter from the throne, he retained his capital, the Great Preslav, autonomy. He occupied only the seaside Dobrudja, arranging a residence in Maloyam Pereyaslavets, in the mouth of the Danube.

The Byzantine plan seemed to have been fulfilled - the Romans were able to concentrate the main forces against the Arabs; they recaptured Cyprus, Antioch. But the result was a surprise for them - firstly, the Ruses defeating the Bulgarian army did not leave; secondly, the second scenario was not justified, they were not bogged down in this war. Svyatoslav, the great warrior, established himself on the Danube, and besides, many Bulgarians recognized him as their lord. Yes, Christianity has not yet been established among the common people; a return to the faith of the ancestors begins. The threat only increased - now the Rus, together with the Bulgarians, could oppose Constantinople, and at one time alone Simeon brought fear on the Romans. Svyatoslav immediately "reminded" Constantinople that he, under the agreement of "friendship and union," should pay tribute to the Russians.

We didn’t want to fight with this warlord, with an incomprehensible outcome, it was necessary to withdraw troops from the Arab front.

Invasion of the Pechenegs. The idea of ​​a new capital

Romes did not always have to fight, many problems could be solved with gold. In the summer of 968, a detachment of Pechenegs invaded the territory of Russia. A sudden blow coming out to Kiev. From there, the messengers rode to Svyatoslav with bitter reproaches that he was not keeping his land. The capital was surrounded and could fall, because of the famine, was rescued by the forces of voivode Pretich. They were not enough to engage in open battle, but they were able to portray the arrival of the vanguard of Svyatoslav. Only his name caused such horror of the steppe that they fled without a fight. But not far away.

Svyatoslav, having received the news immediately made a personal squad, leaving the main forces on the governor of the Wolf. Along the way, I scored "voev" - then all the Rus, the male Slavs were good fighters (there is news that many of the maidens, women mastered the art of battle - the so-called "Polish"), caught up with the Pecheneg troops and defeated them. After a good bashing, the Pechenegs asked for peace, apologized, peace was made.

At that time, Svyatoslav was thinking of transferring the capital of Russia to the Danube, it was a strategically justified step: first, the rate was moved closer to the front, Svyatoslav was going to create a great power that would include the lands of the Slavs on the Balkan Peninsula, and for this it was necessary to crush the Byzantine Empire; secondly, he would control the Danube trade route; thirdly, he could establish domination over the Black Sea and the Balkan Peninsula; Fourth, apparently, he owned information that the ancient center of the Slavs was on the Danube, and the Tale of Bygone Years mentions it.

In order to strengthen the rear, they sowed their sons over the lands - Yaropolk received Kiev, Oleg lands of restless Drevlyans, Novgorod, through Dobrynya, begged Vladimir. According to the Byzantine author Skylitsa, another son of Svyatoslav, Sfengo (Sven, Zvenko, Ringing, Zvyaga?) Was a prince in the Tmutarakan principality, who ruled vast territories of the former Khazaria, for example, instead of Sarkel, they built the White Tower tower, there was a garrison there. 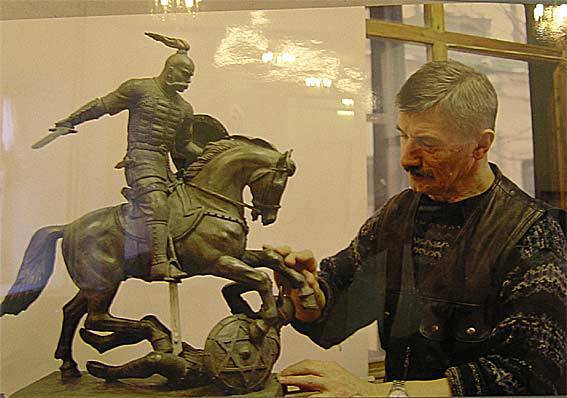 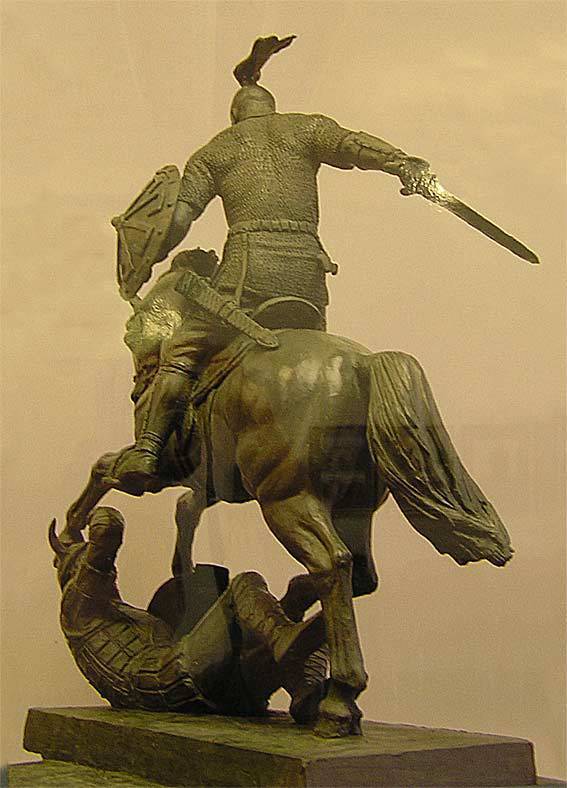 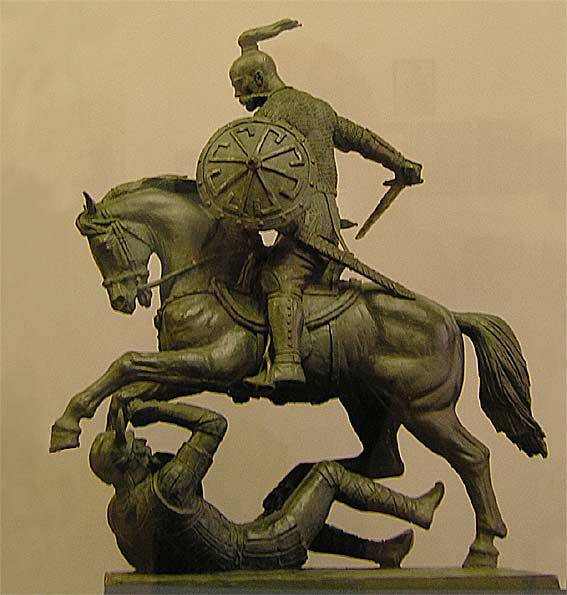 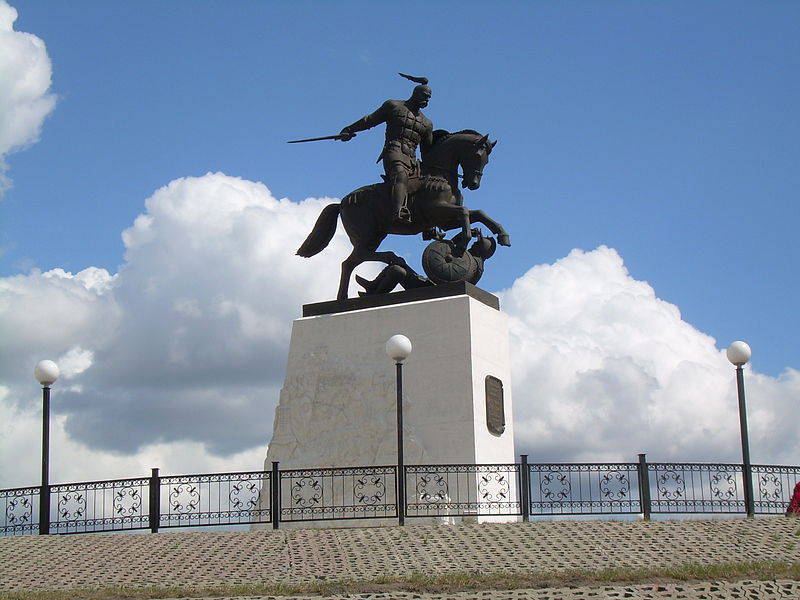 Monument to Svyatoslav Igorevich in with. Withers, Belgorod region.

We are in Yandex Zen
1050 years ago Svyatoslav squads defeated the state of the Khazars
War Svyatoslav with Byzantium. Battle of Arkadiopol
10 comments
Information
Dear reader, to leave comments on the publication, you must to register.