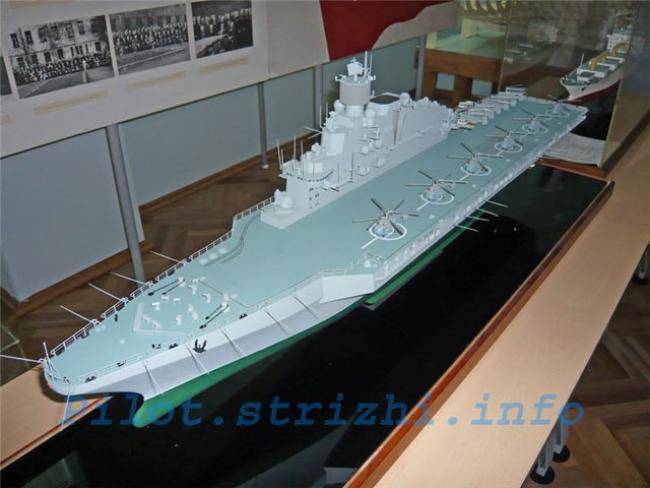 BDK project 1174 type "Ivan Rogov" had many flaws, therefore, at the direction of the Commander-in-Chief of the USSR Navy, Admiral S.G. Gorshkov Nevsky Design Bureau began the development of a full-fledged universal amphibious assault ship of the 11780 project of the Kremenchug type, which was developed throughout the 1980s as a reduced analogue of the American UDC of the Tarava type, for which he received the unofficial nickname “Ivan Tarava”. 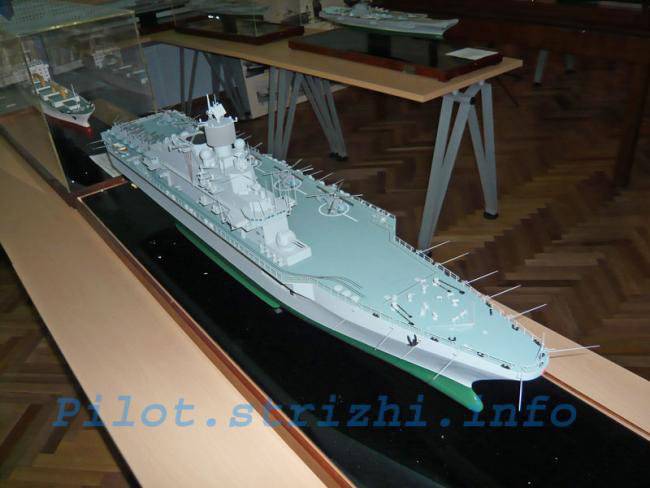 The shape and purpose of the ship changed during the development process. Initially, the purpose of the ship were only amphibious operations. UDC had to have a solid deck, which allowed the use of both helicopters and vertical take-off and landing aircraft Yak-38. The General Staff proposed to turn the ships of the 11780 project into universal aircraft carriers, equipping them with a bow ramp and providing basing and other aircraft. It was assumed the construction of two ships of this project "Kherson" and "Kremenchug". 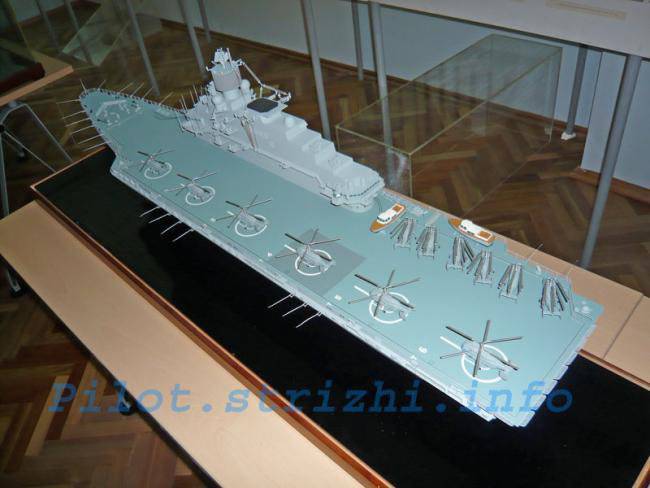 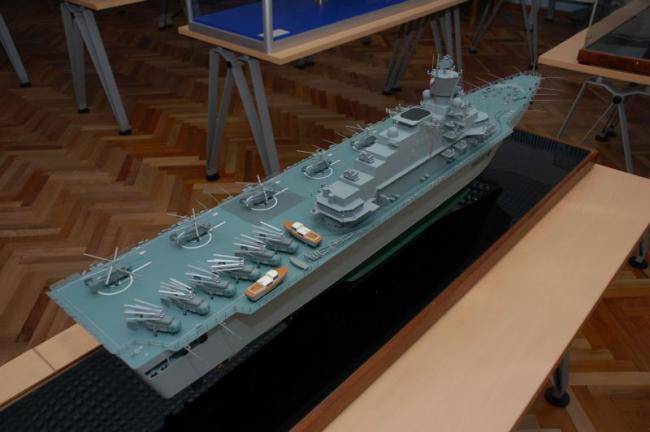 It is known that there were two versions of the ship, which differ in the placement of weapons. Depending on the version of the project, which included from 3 to 6 the TLU of the Dagger anti-aircraft missile system, from 2 to 4 of the combat modules of the Kortik anti-aircraft missile and artillery complex and the AK-130 universal artillery unit. 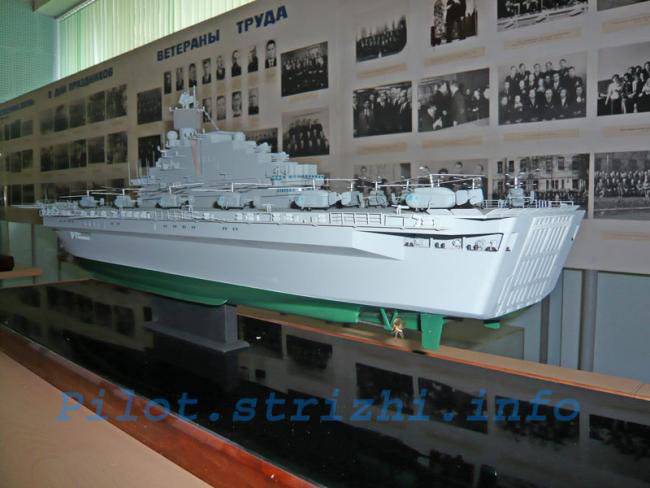 There are no exact data on the number and composition of the landing force for project 11780, the “Aircraft Carriers of Russia” indicate that a similar-sized helicopter carrier, project 10200 “Khalzan” was designed for transportation of 50-60 tanks and a battalion of marines. 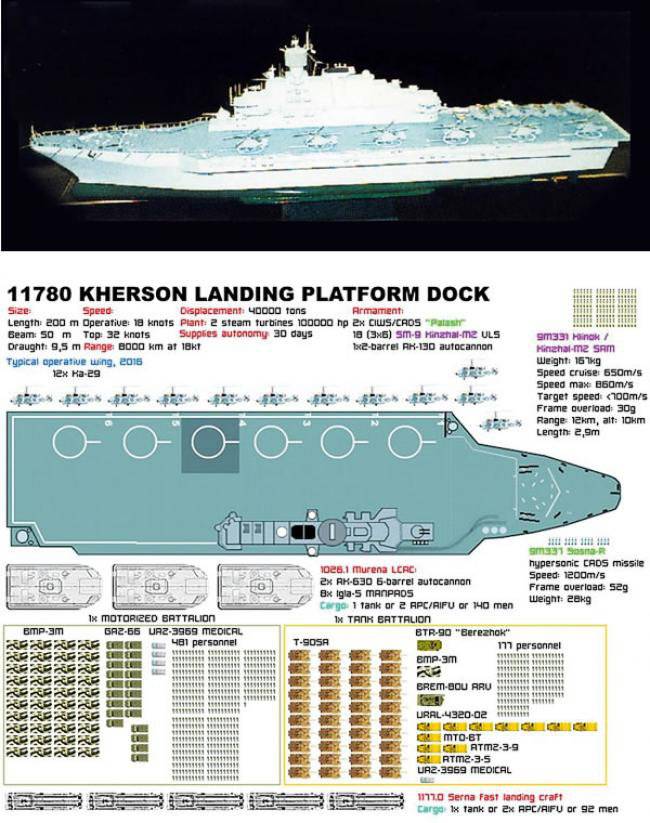 Ships with a standard displacement of 25 000 tons could be built only on the Black Sea GCC, so the “struggle for the stocks” began. At this time, the construction of heavy aircraft-carrying cruisers of the 1143.5 project, the General Staff, should have begun on the stocks of the Black Sea GCC, attaching great importance to the construction of the UDC, and proposed to build them instead of aircraft carriers. This was resisted by the Commander-in-Chief of the Navy. Understanding that the construction of the UDC, due to the lack of the required shipbuilding capacities, will most likely lead to the abandonment of the construction of aircraft-carrying cruisers of the 1143.5 project, they went to the trick. According to the instructions of the Commander-in-Chief, the AU AK-130 was placed in the bow of the ship, right on the flight deck, and the NII NII was assigned the task “scientifically” to substantiate the presence of such weapons and their location. As a result, the General Staff cooled to the project, and construction was postponed. 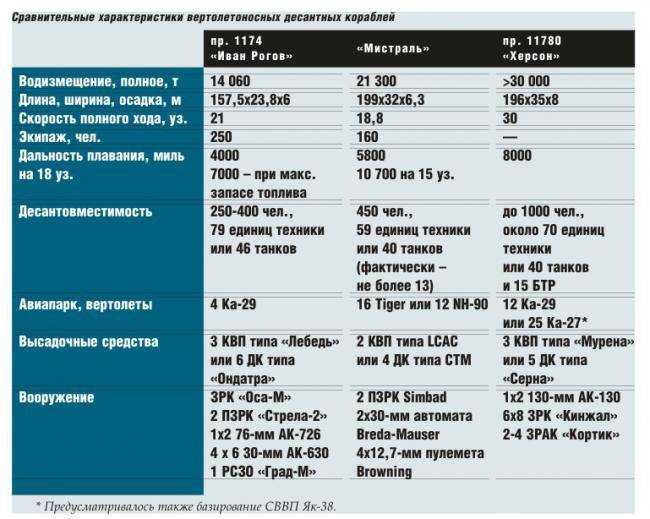 At the request of the USSR Minister of Defense Marshal Ustinov, in peacetime tasks of the 11780 project ships, tracking of enemy submarines in the ocean zone was added in peacetime. Ultimately, all of these changes meant that the 11780 ships were never laid.

PLO helicopter carrier, landing helicopter carrier (draft). The development of the PLO helicopter carrier on the basis of the high-speed civilian container ship Roker 1609 Ave. was initiated by the Deputy Chief of the General Staff of the USSR Armed Forces, Admiral N.N. Amelko in 1978 after conducting the Argus research project (study of an integrated anti-submarine system, including the possibility of building low-cost PLO helicopter carriers based on civilian vessels, the Central Research Institute named after A.Krylova, the head of the research .V.Dmitriev). Ship 1609 av. "Captain Smirnov" (head, 1978 g., All built 4 pcs.) With a gas turbine power unit 2 x GGTA M25 with utilization circuit and power 25000 hp on each of the two shafts, deadweight 20000 t, full displacement 35000 t, length 203 m, width 30 m, depth of the board 21 m, draft 9,9 m and speed of 26 nodes built at the Kherson CVD. TTZ for the creation of a helicopter carrier pr. 10200 prepared in 1977. The Resolution of the USSR Council of Ministers on 21.04.1977 planned construction in 1981-1990. a series of 4 project ships on the stocks No. 1 GCC in Nikolaev as part of a series of rollers of Ave 1609 with parallel construction on the stocks No. 0 of the TAKR series Ave 1143 with a gradual improvement of the project.

The design of the helicopter carrier pr. 10200 was conducted by the Central Design Bureau "Chernomorsudproekt" (Nikolaev) in 1978-1980. Chief Designer Yu.T. Kamenetsky. The sketch project was completed at the end of 1977 in the 4 variants. In the process of designing, the TTZ was changed several times and as a result, a helicopter carrier was designed in two versions - as a ship for a long-range PLO and as a landing ship. Originally it was planned to build project ships at the Kherson CVD, but after the changes due to increasing displacement, the construction of the project became possible only at the Nikolaevsk CVD (which was loaded with construction of the ships of 1143 Ave. and other large orders).

The technical design of the ship pr.10200 was prepared in 1980 by the Decree of the Council of Ministers of the USSR dated 28 in March 1980 in the plan for the construction of ships on 1981-1990. The construction of two ships of the 10200 Ave. on the stocks # 0 CVD in Nikolaev instead of the lead ship of the 1143.5 project with the delivery of the lead ship in 1986 was included. In August 1980, the 1 institute of the Navy made a positive decision on the technical project of 10200 Ave. At the same time, Nevsky PKB, together with the Central Research Institute. A.N.Krylova was proposed an alternative version of pr.10200 in the case of TAKR pr.1143. Analysis of variants of the project 10200 in September 1980 in the Central Research Institute for them. A.N.Krylova showed that the execution of a helicopter carrier in a civilian building does not provide adequate reliability in terms of the GEM (located in one compartment) and does not meet the requirements for military ships in physical fields (GEM had high noise,) low search performance of the PLO system ( 5 times smaller ships pr.1143) .. TsNII them. A.N.Krylova recommended for construction the variant pr. 10200 in the case pr.1143. After that, in September 1980, the 1 institute of the Navy revised the earlier decision on the approval of pr.10200. In November, 1980, on the scientific and technical council of the USSR Ministry of Industry and Technology, the technical design of project 10200 was rejected. At the end of 1980 - the beginning of 1981. Nevsky PKB developed a project of an antisubmarine helicopter carrier with amphibious capabilities of the 10200М, which was also rejected by 31 in March of 1981 by the decision of the 1-th Institute of the Navy, Central Research Institute. Academician AN Krylov, 24-th Institute of the Navy, a branch of the 30-th Institute of the Navy and the Nevsky PKB.

The default data of the original pr.10200 "Halzan" TsKB "Chernomorsudproekt":

Pr.10200М (1980) - an alternative project of anti-submarine-assault helicopter carrier - in the TAKR case, pr.1143 Nevsky PKB. The project is recognized as ineffective in comparison with the TKR Ave. 11434 for combat stability in solving PLO tasks. 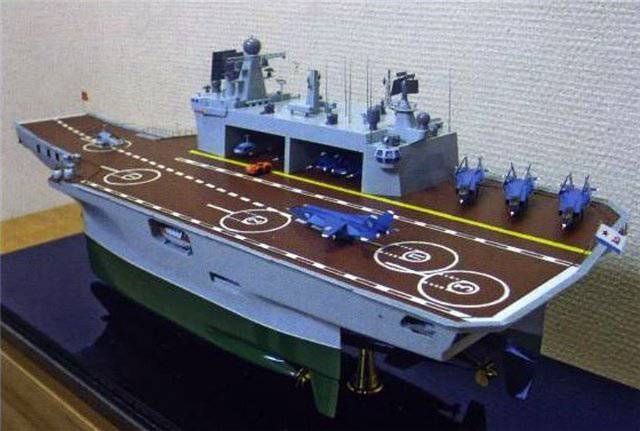 “The photographs of the aircraft carrying KMPV“ Dolphin ”in two-hull and three-hull variant, the ship was designed by the Northern PKB with 1986 for the promising Yak-141 aircraft. it didn’t even go on. The work on the project was curtailed with the completion of the Yak-200.

Unfortunately, this is all the information that is, the ship was designed as a small and inexpensive.

Another interesting fact: under the deck of the hangar is not just because of the multi-hull structure, because of this hangars are visible in the superstructure, it turns out, everything that fits on the deck, and will be the air group. By my calculations, it turned out 14 LA. 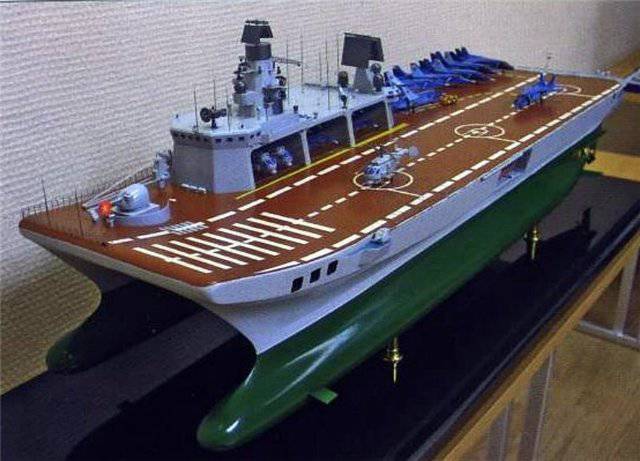 The project was changed several times and in the final version was left without Yak-38 / Yak-141. But the anti-submarine mission of the ship was supposed after the replacement of the Ka-29 helicopters with the Ka-27. The finished project was submitted to the General Staff, where interest in it immediately disappeared. The project was secretly called “Ivan Tarava” because, in its original form, by purpose and purpose, it looked like the American UDC “TARAVA”.

In 1985, the TTZ was issued for the development of the landing ship dock. According to the results of the study, the Nevsky PKB presented the 3 version, which differed in displacement (from 19500 to 24800), length (from 204 to 214) and the dimensions of the dock-camera (from 75 to 80). After discussion, a large-tonnage version was selected for further development, which received the 1609 project number.

According to many experts in the field fleet, ships of the project 1609 would not only not be inferior to the Frenchman, but even would surpass him. It is difficult for me to evaluate this objectively. But if you look at the proposed performance characteristics of the ship project 1609, it seems just obvious. And most importantly, these ships were to be built in Russia, and they were completely tough for Russian industry (at least in the late 90s).