United States and Saudis continue to deceive the UN 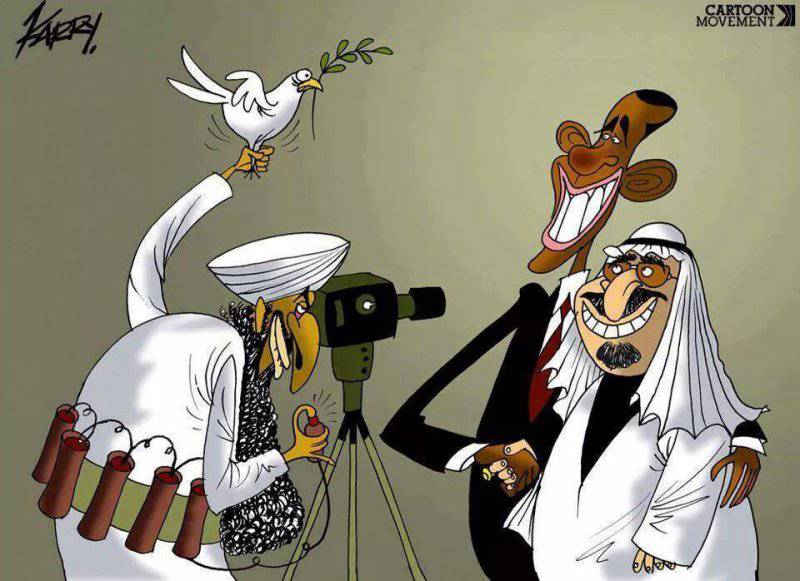 The United States and its allies, especially in the face of the Arab monarchies of the medieval type, continue to deceive the world community regarding the situation in Syria.

The Third Committee of the UN General Assembly (Committee on Social, Humanitarian and Cultural Affairs) 18 in November considered a draft anti-Syrian resolution submitted by the Kingdom of Saudi Arabia. And again, one of the most reactionary regimes in the world, the absolute monarchy, took upon itself the role of teaching freedom and democracy a country in which there is a parliament, and presidential elections, and a completely democratic Constitution.

As Bashar Al-Jafari, the Permanent Representative of Syria to the UN, said at the meeting, this is a real theater of absurdity, since the Saudi terrorist regime does not recognize the right to vote for its own people.

The document submitted by the Saudi kingdom, however, found support primarily from the United States - these “great fighters for democracy”, who for some reason do not pay the slightest attention to the rights of ordinary people in KSA. Yes, and Saudi Arabia itself would hardly have submitted such a draft resolution without agreement with its Washington “elder brother”.

The false document, unfortunately, was supported by 125-th countries. 13 states voted against, 47 abstained.

Among the countries that rejected the resolution was Russia. Anatoly Viktorov, Director of the Department of Humanitarian Cooperation and Human Rights at the Ministry of Foreign Affairs of the Russian Federation, stressed that this document creates an atmosphere of confrontation and mistrust. “And this is at a time when it is so necessary for the international community to consolidate efforts to achieve a peaceful resolution of the crisis in the SAR,” the representative of Russia said. He added that the authors "act in defiance of the logic of a politico-diplomatic settlement, placing the main responsibility in the country on the government, while not it, but the foreign opposition needs to be pushed to start negotiations with the authorities."

The resolution calls on the Syrian authorities to stop the shelling and bombing of the territories controlled by the "opposition." The situation is absurd - at a time when the United States is allegedly fighting terrorism by bombarding the territories of foreign countries - Syria and Iraq - at the same time Syria is trying to ban the fight against terrorism on its own territory! Indeed, otherwise as an absurd theater, such a situation can not be called.

As for the actions of terrorist groups, their terrible crimes, murders, torture of unwanted citizens, indiscriminate mortar shelling - in this Saudi-American resolution, as always, not a word was said. Even the recent killing of the citizens of the United States, Britain and France by the “Islamic state” has not been touched on in this false text!

It is characteristic that the same Third Committee of the UN General Assembly adopted one more equally biased resolution against another state that is not acceptable to the United States - the DPRK. It recommends that the Security Council refer the case of “violations of human rights” in this country to the International Criminal Court. Syria, Russia, China, Belarus and another 15 countries did not support this resolution, but, unfortunately, there are very few independent states left. Characteristically, the strategy of former US President George W. Bush, announced shortly after the 11 events of September 2001, continues to be implemented - there is an “axis of evil”, which includes Iran, Iraq, Libya, North Korea and Syria. Some of these countries have already been brought to their knees and turned into an arena of bloody battles, against others - such fraudulent resolutions are being adopted.

While there is such deception of almost the entire world, terrorist crimes continue in Syria. 16 November in the city of Hama because of the explosion of a car bomb killed two people and two more were injured. In the province of Damascus, a woman and a three-year-old girl were injured due to mortar shelling of the Al-Wafidin refugee camp. In the city of Duma, one of the Islamist groups attacked a residential neighborhood, killing and abducting several citizens. In response, residents of the city organized a protest demonstration against such actions of militants. The terrorists opened fire on this peaceful demonstration, killing eight people.

On November 18, in the province of Deir ez-Zor, “opposition” militants brutally murdered five people who outraged their bodies.

In Damascus, in the Al-Amar quarter, an explosive device set in motion by terrorists was attached to a bicycle left near the entrance. Three local residents suffered.

Such a sad chronicle is replenished almost every day, but for the authors of the anti-Syrian resolutions the blood of the Syrians who were killed and wounded at the hands of “opposition” terrorists does not matter. They continue to support criminals at the highest international level.