Anesthesia will not help a second time. Will have to cut 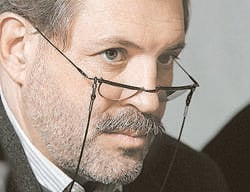 20 years ago. What was it? In itself, the so-called putsch due to nullity in relation to the context is a secondary issue. But 20 years without a superpower, without a great country - this is already sufficient historical term to see much better what was not so clearly visible then.


What Putin called the “greatest geopolitical catastrophe” certainly was and was - this is an obvious fact outside of any relation to the previous and subsequent processes.

This was, of course, a catastrophe not only geopolitical, but also moral, social and economic, including on a global scale - as evidenced by the current crisis.

If we talk about a political catastrophe, more precisely, about a catastrophe of the world order, then this was obviously a catastrophe for socialism, and it is obvious that not only the so-called “socialist camp” with real socialism had died. In the most bizarre way, this turned out to be a catastrophe for liberal socialism, for social democratic, western socialism. Because it turned out that the guarantor, political and economic stimulus for its existence, that is, for a powerful social redistribution, at least within the “golden billion”, was the existence of “real socialism”. And the dismantling of the social institutions that capitalism has built, that mixing mechanism, in fact, of the real, completely predatory nature of capitalism — it is now being dismantled. It is dismantled outside of will and consciousness - the former “golden billion” will not be asked by anyone, since there will be no “golden” for a billion heads.

And most importantly: it turned out to be a catastrophe for "real capitalism".

All the Fukuyamov chimeras about the "end of history" - they very obviously ordered a long life. We now see that history has not only not ended, political development has not stopped, having reached its highest tolerant liberal peaks, we see that history is just beginning. Moreover, this latest history begins with such critically dangerous and unpredictable forms, before which the cataclysms of the beginning of past centuries are known to simply rest.

And now all the same back to local events. What it was in terms of a specific episode of August 1991 of the year. Exactly 20 years ago, Mr. Gorbachev was brought on a plane from Foros, like a bag of shit, tied with a three-color ribbon. Everything about Gorbachev is already known: the documents are published, and the scale of the personality is confirmed. In fact, Gorbachev here is a very revealing figure. Everything that we saw 20 years ago was a manifestation of a systemic crisis and, sorry for the tautology, the crisis of the Soviet system. The essence of the systemic crisis is that the system, facing a challenge, is unable to adequately respond to it. That is, the system with its "answers" exacerbates the situation, it goes peddling. The very figure of Gorbachev is the ideal personification of a systemic crisis. There is a brilliant phrase in one of his interviews. When they asked him: why did you not leave Foros yourself? There was no guard there, and a low fence ... - he replied: “This is not a presidential thing - to climb over the fences!” The man, on the one hand, is unable to complete a syntactic structure, that is, incapable of organically systemically seeing a situation, but on the other hand, the ideal “hardware adequate” system is just a gift for disaster. History, as a rule, deservedly gives such gifts to incapacitated systems.

The main resource that was absent from the system is the ability to legitimate violence. It is clear that the idea of ​​a coup was - to demonstrate a certain will, scaring the ghosts of historical memory. But it was absolutely not designed for any real organized violence. Vitaly Naishul somehow defined the legitimate power from the reverse as "a power that has the right to shoot its own people." This definition is accurate. And it was clearly seen that the coup, with all their good intentions, did not consider their authority legitimate. Therefore, naive ardent young men accidentally suppressed by armored vehicles became the minimally sufficient drop that collapsed the entire structure of the so-called. putsch There could be nothing else.

And here there are two very important lessons, extremely relevant today. First: Unlike that time, today our society is simply pregnant with violence. Then no one, no power structure, was not ready to give the order to fire. Now it is easier to shoot than to send. Easier, cheaper and less trouble.

By the way, the image of security forces cherished by the liberals who refuse to shoot at the people does not at all mean a rejection of violence. This comrades can not understand. It can automatically mean just the intention to shoot. But not according to the order, but according to one’s own understanding, one’s own social and moral (or unfair) choice. That in no way leads to any consequences of a liberal character.

And the second. The colossal catastrophe, geopolitical and economic, social and other, did not lead to any direct outbursts of social violence, to civil war, as could be expected on such a scale of collapse and on such a scale of subsequent transformations. For one simple reason: no matter what we talked about, “the fight against privileges”, we were a class-homogeneous society. And the level of social hatred in him was minimal - there was no one and no one to go to in a civil war. Again - a lesson: today the level of social heterogeneity of our society, to put it mildly, is Latin American. Therefore, in the case of landslides, cliffs, even disproportionately smaller than the transformation of 20 years ago - the potential for a civil collision in a country is enormous.

Practically everything that happened in 20 years (even taking into account the efforts of the last decade to stabilize and mitigate social tensions) - in the deep plan was to increase this potential for civil confrontation. The collapse of the Soviet system gave a new tolerance resource to the new authorities. That same legitimacy that the Soviet predecessors no longer had.

The new system received a mandate for something that the Soviet did not have a mandate for — legitimate violence, economic violence, political and even physical. And all this power is used extremely quickly and irresponsibly. The mandate for economic and social violence is completely, most likely, exhausted by default. It is characteristic that starting from the zero years, from the Putin period, we have sharply increased social spending and, in general, attention to social issues. Our social system is certainly not very effective. But already at the genetic level, the authorities understand that regardless of any medium-term transformations in the short term, it is necessary to flood, if possible, social wounds with budget money.

The mandate on physical abuse was extensively used in October of 93. One can imagine: if the Gkpchists decided on such, the Communists would have hung on all the pillars as in Budapest in 56. Once again: the legitimate power - has the right to shoot at their own. But, taking advantage of this right, the legitimate authority assumes a tremendous responsibility. After 93, the then “transitional regime” assumed colossal irresponsibility. Than really exhausted its legitimacy. Just about the end of 90's.

Today, if we talk about police violence - then the current government, meticulously and severely cutting off all unresolved, allegedly civil actions, which in fact are primarily provocations of violence, acts absolutely precisely: with an understanding of the limited possibilities of large-scale violence. Since, having lost control over such supposedly ridiculous and insignificant shares, it may face the need for much greater and serious violence, which the authorities do not want and cannot. This tactic is absolutely adequate.

In general, one can say: over the years, we have retained the residual potential, but have not solved a single problem. The event itself 20-year-old was not a solution - it was, again, a disaster. The ideological, mental core of this catastrophe was a great illusion, as in the well-known joke - “the old woman, everything that you and I considered an orgasm turned out to be asthma”. Until society realized that asthma is not an orgasm, nothing could be done either with society or with the country. From this point of view, Yeltsin was also a completely adequate political figure. He was the perfect chairman of freefall in the abyss. Until the country hit the bottom of the abyss. It was a great success that the shock of the blow did not lead to death, but to a partial awakening of consciousness.

The main thing that we have achieved is the rout of the intellectual liberal illusion. This is in itself a great happiness. From this point of view, the latest constructions, such as the experiment on Mikhail Prokhorov’s living body, are absolutely meaningless. Nothing but an expensive farce will come of them.

Now about the country that is not 20 years. What is left of it? There remains the "residual" potential of the Soviet system, which turned out to be surprisingly huge. We don’t drag on the remains of the Soviet system: it is the remains that drag on us. Haul there are still years 5 otsilit. This is the first. Second: there is a generation left that still remembers that country, that is, it remembers that it is not necessary to reproduce under any circumstances - and it remembers a different scale of life, tasks, thinking, and self-identification. And not only in Russia - it may be clearer and more painful it is felt where it is most under pressure. In Moldova, Georgia, the Baltic States. This generation also has about five years left in its current position. Then another will come - you can rely on his genetic memory, but God knows that there this memory will draw in the brains of a catastrophic generation. Finally: about five years, we still have to stretch out on expensive energy carriers. And that's all: further - carefully, the doors are closing.

... And about revenge. Why, with obviously favorable social background, with the demand for revenge - revenge did not work? That was a revenge, you need a complete and final disaster. It did not happen. Here we take Tsarist Russia: by the year 20 nothing left of it was left. She was practically destroyed. Germany after World War II was crushed, humiliated and disarmed. The phenomenon of the Soviet Union was that our winners decided that everything was over. By 99, they were convinced that the country that had lost the war to the Chechen gangsters was not capable of anything. That its nuclear and other potentials pose neither a serious threat nor a serious task. They could have soaked us then - but out of greed they did not do that.

However, the quasi-revenge of the zero years was also to some extent anesthesia. Having already realized the catastrophe, the country was physically, financially, geopolitically incapable of being radically treated. And the government had neither a mandate nor a resource for this. There were no other resources except for anesthesia and primary resuscitation.

That's when this anesthesia is over - it turns out that the wound has not healed. And the second time anesthesia does not help, you have to cut it.

We are in Yandex Zen
Interview of V. Putin to Channel One and the Associated Press Agency
What you didn't want to know about England
13 comments
Information
Dear reader, to leave comments on the publication, you must to register.