Is Israel the next victim of the global crisis? 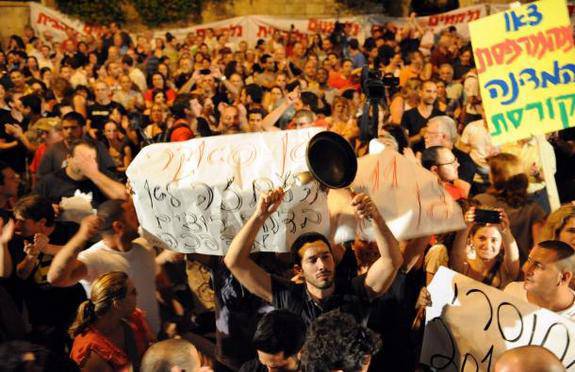 Israel, it seems, cannot avoid the fate of the victims of the global crisis processes. This is evidenced by the recent foreign policy events and the beginning of the new "exodus" of Jews from Israel. So, on August 18, several Egyptian soldiers were killed on the territory of Egypt, bordering Israel. According to a report sounded by the state news agency of Egypt, the Egyptian military were fired from an Israeli helicopter that participated in an operation to eliminate terrorists who staged a three-day terrorist attack near the city of Eilat. In Cairo, the Arabs outside the Israeli embassy staged a protest, the authorities were forced to strengthen the security of the embassy. 20 August Cairo decided to recall the ambassador from Israel.

This event took place against the backdrop of strikes by the Israeli army on the Gaza Strip, in response to the terrorist attack in the Eilat area. Although earlier, Palestinian movements Hamas and Islamic Jihad reported about their non-involvement in the events near Eilat. A Hamas spokesman even suggested that these attacks are an attempt by the Israeli authorities to distract their people from the domestic political crisis (since July, numerous social protest actions have been held in the Israeli state, which they even dubbed “revolution”). A representative of Islamic Jihad called terrorist acts "pay for crimes committed against the Palestinian people and all the peoples of the region."

After Israel’s missile attacks, the leadership of the Palestinian movement Hamas (the Islamic Resistance Movement — the Islamic Palestinian movement and political party that has been ruling since 2007 in the Gaza Strip) announced the end of the de facto ceasefire with Israel, which has been in effect since the beginning of 2009. On the radio of one of the radio stations broadcasting in the Gaza Strip, a message was sounded: "No more truce with the enemy."

And this is happening against the background of the general destabilization of the situation in the Arab world, based on these events, it becomes understandable and the desire of some Jews to find a more stable territory for life, without the constant threat of war, rocket attacks, terrorist acts.

In addition, in September 2011, the world is awaiting the proclamation of the sovereign state of Palestine within the boundaries of 1967. It is clear that this event will not instantly change the balance of power in the Middle East. But we can say that this event will be a serious blow to the image of the state of Israel and will show the world (especially Arabs and Muslims) that its regional leadership is rapidly leaving. This event will be one link in the chain of tectonic political shifts in the Middle East. Indeed, judging by the latest events, the Anglo-Saxons chose the Middle East as a zone of "fire" in an attempt to solve their problems at the expense of others. And in the course of these events, Israel is waiting for death - there are more chances for this than that it will survive and be able to realize the “Great Israel” scenario. A bet on high military technology will not save it, forces are too unequal, for comparison - in Israel no more than 8 million people, in Egypt - more than 80 million. Besides, the current Jews are not the ones in the 60s, these are brought up by the consumer society, they don’t want to die for the “Great Israel”. The death of the USSR automatically led to such a scenario — the only condition for the survival of the Jewish state was the existence of a bipolar system. Moreover, when Israel was founded, its leaders understood that it was necessary to keep neutrality towards the United States, and the transition to the Washington side in the 60s led to an imbalance of forces. And now the winners in the “cold war” are ready to blow up the Middle East (they have already blown up), although with this course of events, Israel is under attack. He is simply sacrificed, Israel is appointed the scapegoat. As a result, it turns out that Jews (especially Russian and Middle Eastern) are actually interested in restoring the bipolar system, in restoring the Eastern European empire. In this scenario, Israel has chances to live.

Reference: Mass emigration of Jews from the USSRstarted from the 70 of the 20 century. In Palestine for permanent residence left before: in the 30, and at the end of 40-s - then quite a lot of military, officers and even generals left the Soviet Union, they were not repaired with obstacles, they encouraged them more quickly, t. K. believed that in this way Moscow strengthened its presence in the Middle East. But then, after the death of Joseph Stalin, the foreign policy paths of Israel and the Red Empire diverged for a long time, and the emigration turned off. The mass departure of Jews from the USSR was allowed only in the 70-s. In all, from 1970 to 2006, almost 2 million Jews left the USSR and the Russian Federation for the Promised Land. True, not all Jews arrived to Israel, some of them found shelter in Germany and the USA, about half a million people.

Are Jews returning to Russia?

Currently, more than 1 million Russian Jews (from the USSR and the Russian Federation) live in Israel. They did not assimilate in Israel: they speak Russian, read Russian literature, newspapers, magazines, watch Russian-language TV channels. They identify themselves more with Russian culture than with Israeli. But until recently, most of them had no idea of ​​returning to Russia. But tentatively in 2010, Russian-speaking Jews actually began a massive "exodus" from Israel - 200 th. Tons. Russian Jews left Israel and moved to permanent residence in Russia, Ukraine and Belarus. Until the end of 2011, about the same number of Jews plan to leave. And many more are going to go to 2012 year, just planning to leave Israel and settle in the Russian Federation and the CIS countries to 700 thousand people. Some of them are planning to retain Israeli citizenship, but about a third are going to get Russian passports.

Two Russian regions have already announced their readiness to accept "returnees" - the Jewish Autonomous Region and the Primorsky Territory, Governors Sergey Darkin and Nikolai Volkov stated. Interestingly, immigrants, at least a significant part of them are ready for these “bear corners”. Does the prospect of living in Birobidzhan or Vladivostok go better than staying in Israel ?!

The main reason for this situation is the current alarming situation in the Middle East. Missiles and shells are falling from Palestine and Lebanon, terrorist attacks regularly occur, and pressure from the Arab world is increasing. Yes, and the influx of Jews from the outside subsided, American Jews are in no hurry to "historical homeland, "Israeli youth leaves for Europe, in the USA, the share of non-Jews is growing rapidly. According to some demographers, the Arabs will become the ethnic majority in Israel by 2020 (up to 53% of the country's population). Russian Jews went to Israel in pursuit of a “better life”, and received life in fear of dying from a terrorist attack, or from shelling, a certain contempt of “native” Jews who do not fully recognize them as “their own”, work in kibbutzim (local collective farms) ), compulsory military service not only for men, but also for women. And the prospect of a war with Iran, or even a large part of the Arab world. Rainbow dreams collided with reality collapsed. People experienced a psychological shock.

Thus, according to the Israeli newspaper Haaretz, which announced the statistics of the Center for the Study of Iran at the University of Tel Aviv, almost a quarter of Israel’s citizens, 23%, are ready to leave the “historic homeland” immediately if they hear that Tehran has received nuclear weapon. The Iranian Studies Center decided to dig deeper and find out who these 23% are. It turned out that most of them were Jews from the former republics of the Soviet Union and from the countries of Eastern Europe belonging to the Warsaw Pact, mainly from Poland and Romania. Among the "indigenous" Jews - Vatikov - there are practically no people willing to leave Israel. Approximately 7,7 million people live in modern Israel, of which 1 million 100 thousand people are our former compatriots and about 1 million people are yesterday's neighbors in the socialist camp. It turns out that they are ready for remigration and are already “proceeding”. Someone is ready to leave forever, the part is ready to return if the danger leaves.

Most of those who are ready to leave are young people at the age of 18-35, that is, of the very reproductive age, and the draft, those who are thrown into battle, if a war happens. According to the public organization "Target-21", most of those who are ready to go to Russia and other Eastern European countries are willing to "retract" from serving in the army. “The children of repatriates from the former republics of the USSR and Eastern Europe didn’t rush into the army at the best of times,” said Natanel Litvinovich, coordinator of Target-21. “And now, when conscripts are shining to participate in a real war, there are even fewer people willing to serve.” There is an opportunity to “hang out” for a bribe, but firstly the sums are large, and not everyone has that kind of money, secondly, it is easier to just leave and don’t pay. And on the alternative service takes only girls and then very meticulously check the "pacifist" beliefs.

According to Natanel Litvinovich: “If a war begins with Iran — and this is somehow inevitable in the near future — young people will have to go to war.” And not all Russian Jews consider Israel to be their real homeland, “they continue to consider Russia rather as such” and are ready to fight for it. Part of the Russian-speaking Jews are ready to move to Ukraine, there is a rumor that there will soon be passed a law on dual citizenship, and they are ready to take Ukrainian citizenship.

True, if everything is clear with the motives of Jews who are going to, or have already traveled from Israel, another question arises - why to Russia, Ukraine and other countries of the former socialist camp, and not to the USA, EU countries? According to the Israeli philosopher and publicist Larisa Naidich, it is difficult for them to give up Russian roots, Russian culture and language has such a powerful field that Israel’s “melting pot” could not dissolve Russian Jews. “The educational and general cultural level of the Russian Jewish émigrés was very high,” reports Larisa Naidich. “About 60% of adult repatriates from Russia of the end of 80's - the beginning of 90's had a higher education”, in order to realize the importance of this figure it is worth knowing about the other, because among Jews-Israelis this level was only 18 – 20%. Many came to Israel from megacities, the largest Soviet scientific and cultural centers - Moscow, Leningrad, Kiev, Minsk, Odessa, Tashkent and other cities. Therefore, Soviet, Russian Jews put and put Russian culture, art, humanities above Israeli culture. And there is almost no mixing of cultures: according to Larisa Naidich, half of the people from the USSR, Russia and the CIS countries spend their free time only with their own kind, Russian-speaking Jews, 40% more - “with Russian and Israeli friends” and only every tenth - “ with Israeli friends. ” “Only 12,5% of repatriates had romantic relations outside the Russian community, and 52,7% of them answered that such relations were impossible for them in principle,” reports Larisa Naidich. They prefer to settle compactly. They communicate exclusively in Russian. Russian was even proposed to be made the third state language of Israel, together with the reconstructed "Hebrew" and Arabic languages, but the proposal did not pass in 1998. That is, they remained in the Russian cultural field.

We are in Yandex Zen
The Iron Dome passed combat tests
The Palestinian problem and the question of the survival of Israel in the future
10 comments
Information
Dear reader, to leave comments on the publication, you must to register.