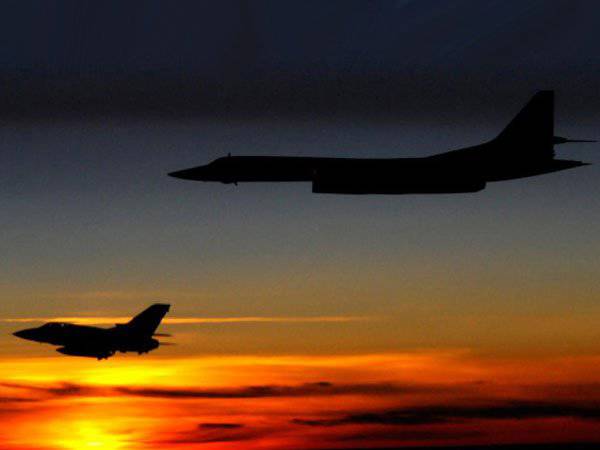 Frequent flights of the Russian strategic aviation near the borders of NATO countries caused a rather sharp reaction. Headlines about this do not slip off the pages of Western newspapers, and on November 17, NATO Secretary General Jens Stoltenberg expressed concern that the flights of Russian bombers are dangerous for civil aviation, as Russian pilots do not communicate with civilian controllers. Russian President Vladimir Putin said that more frequent flights are Russia's response to US activity near the borders of our country. If the reaction of European and American newspapermen is quite understandable - who will deny themselves the opportunity to scare ordinary people with myths about a resurgent "nuclear bear", then the nervousness of Western officials raises some questions.

To begin with, there has never been a single incident affecting civil aviation connected with Soviet or Russian strategic aviation, although during Soviet times the flight intensity was much higher than now. At the same time, at least 2 of a NATO fighter was lost during conditional interceptions of Soviet Tu-95. So the words of Jens Stolenberg are not very wealthy. Nervousness can be explained by two reasons.

1) Many European countries and their inhabitants have lost the habit of thinking that they can be targeted by such formidable cars as the Tu-95 and Tu-160. Even theoretically. Therefore, strategic bombers flying close by, carrying the 8 (Tu-95MS) to 12 (Tu-160) X-55 cruise missiles with nuclear warheads, cause a nervous tick from the authorities of some states.

2) A more practical reason - the interception of bombers flying close to the airspace of the NATO countries is a very expensive resource of gliders and fighter engines.

Here it is worth paying attention to one detail. Resource gliders strategic bombers is very large - they were originally designed for long flights over great distances. With the fact that the “youngest” Tu-95MS is already 22 of the year (the Tu-95 line was made from 1955 to 1992 a year), these planes will fly at least 20 years at the current flight intensity. Although their design is not new - the plane is very noisy, noticeable for radars and subsonic, but it can carry out its tasks for many more years. After all, in fact, the Tu-95 is the carrier for strategic cruise missiles. Now X-55CM missiles are used, with a flight range of up to 3500 km, and soon after upgrading, the Tu-95 and Tu-160 will take on board the X-101 CR (nuclear-powered 102), with a launch range of up to 5500 km and circular the deviation of the entire 10 meters, which will allow also to deliver high-precision non-nuclear strikes. In fact, the aircraft at the time of the launch of the missiles may be very far from the fighter aircraft and air defense of the enemy, therefore, outstanding flight characteristics are not needed. As for the fighters - their resource is noticeably less than that of strategic aviation. For example, the glider resource of the most common NATO fighter F-16 is 8000 hours, for F-18 - 6000 hours. Most of the released fighters of this class, like the F-15, are already close to a complete depletion of the airframe resource.

For example, Canada, often “terrorized” by Tu-95 and Tu-160, has 79 CF-18 fighters, which are far from the first freshness. Each departure of these machines, and even with the use of afterburner engines (to catch the interception time) and in cold conditions, brings the end of these machines closer. A replacement in the form of still “raw” F-35 is very expensive, and it is not yet known when it will actually go into service. The same scheme works with other countries.

Particularly "annoying" may be the Tu-160, which may offer to "play" in the race at supersonic and at high altitudes. So, the response to the activation of the US forces near the borders of Russia is quite adequate - it carries both symmetry and asymmetry - a real blow to the pocket of the countries of the NATO bloc.