November 19, 2014
38
The two-link snow and swamp-going vehicles produced by the Vishyaz Ishimbay plant are widely known. Thanks to the original design, these cars have good throughput and can be used as a convenient off-road vehicle. A few years ago, the all-terrain vehicle had a competitor - the GAZ-3344, developed by Zavolzhsky Tracked Tractor Plant. 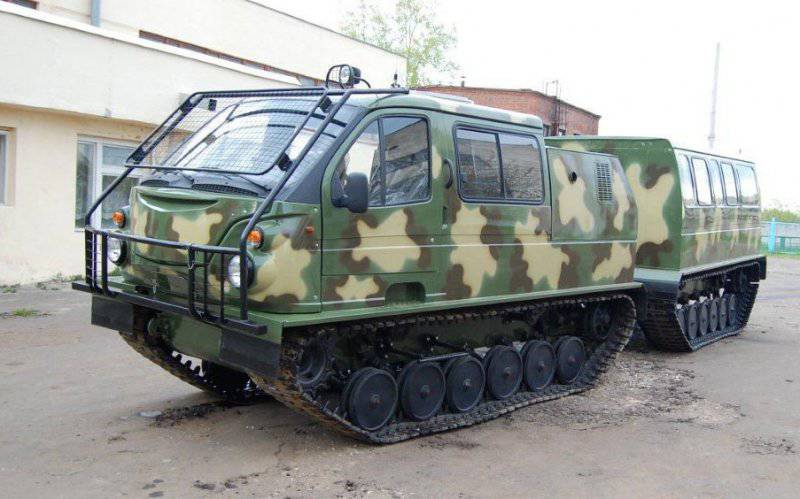 The GAZ-3344 all-terrain vehicle was created by specialists of the Zavolzhsky plant of tracked tractor (Zavolzhye, Nizhny Novgorod region), which is part of the GAZ group of companies, and is intended for transportation of people or goods over rough terrain and off-road. In order to increase the carrying capacity and throughput, the machine is built according to a two-tier scheme: it is structurally divided into two blocks with its own undercarriage.

Blocks-links are interconnected by means of a special hinge with the possibility of blocking. This architecture significantly increases the machine's throughput due to the possibility of changing the mutual position of the links, as well as by blocking the hinge, which allows increasing the width of the crossed trenches. The hinge has four hydraulic cylinders, which ensure the interaction of machine links in two planes.

The bodies of both links of the GAZ-3344 all-terrain vehicle have approximately the same design. Their lower part is made of steel sheet in the form of a “boat” and should provide for all-terrain vehicle buoyancy. On these "boats" are mounted other units, including the power plant and cargo and passenger cabins. Two-tier architecture affected the layout of the units. So, the engine of the car is located in the front link and transmits torque to the drive wheels of both links through the transmission with the transfer case.

The power plant of the all-terrain vehicle is located in the front link. Modifications are available with the Yaroslavl-5402 Yaroslavl diesel engine with 190 horsepower. and the Cummins ISB4 / 5E3 engine with 185 horsepower The engine of the all-terrain vehicle is mated to a five-speed Allison 2500 gearbox. To optimize the load distribution on the tracks, the engine is located at the rear of the front link. The drive wheels of both links are in front of their bodies. Power is transmitted to the driving wheels of the rear link by means of a cardan shaft passing through the hinge.

Chassis two links all-terrain vehicle GAZ-3344 has the same design. On each side there are six road wheels with individual torsion bar suspension. The front and rear rollers of each link are also equipped with shock absorbers and travel stops that prevent damage to the undercarriage when driving in difficult conditions. Rubber asphalt boots can be mounted on the tracks of the all-terrain vehicle. The design of the shoes allows you to install them without dismantling the tracks. If necessary, shoes can be used to move not only on roads, but also on rough terrain. 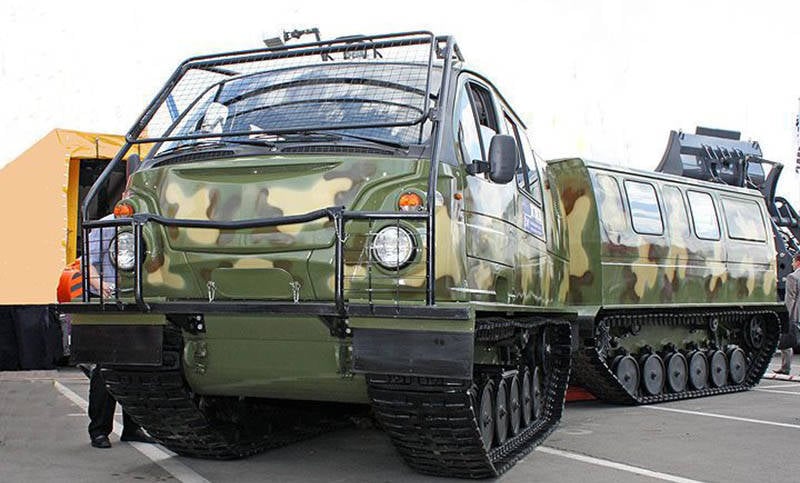 Chassis of various types can be installed on the basic two-link chassis. GAZ-3344 snow and swamp vehicle can be the basis for various equipment, which was taken into account when developing it. The front link in all versions is equipped with a housing that accommodates the cockpit and engine compartment. The passenger part of the hull resembles a minivan-class car with its outlines. It has space for the driver and four passengers. The cabin is equipped with noise and heat insulation, as well as a heater. If necessary, cargo can be transported in the back of this cabin. The load capacity of the front link is limited due to the presence of the engine and transmission units. No more than 500 cargo can be carried in the front cabin. To avoid damage to the front cockpit, a frame with grilles covering the light equipment and the windshield can be mounted on it.

In the basic version of the snow and swamp vehicle, the rear link is equipped with a box body for the carriage of goods or passengers. The van provides 15 seats, several windows and aft door. Like the front cabin, the back is insulated and protected from noise, and can also be equipped with an autonomous heater. In addition to people in the back link, loads of appropriate sizes can be transported. If necessary, the crew of the machine can use the available beds. In the front cabin can relax at the same time two people, in the back - six. Maximum payload link - 2000 kg. Thus, the GAZ-3344 all-terrain vehicle is capable of transporting over rough terrain to 20 people (including the driver) or 2,5 tons of cargo.

The rear link of the GAZ-3344 can carry not only a passenger-and-freight cabin, but also various special equipment. According to the official website of the Zavolzhsky plant of tracked tractor, the all-terrain vehicle can be equipped with a cargo platform (load capacity 2500 kg), emergency rescue or fire module, a tower-lift, a drilling rig and other equipment. Such a modular rear link design should provide an all-terrain vehicle with a great future, since it may be of interest to many potential customers who need equipment for one purpose or another.

The two-link all-terrain vehicle GAZ-3344 turned out to be quite compact. Its length does not exceed 9,8 m, width - 2,02 m and height - 2,65 mm. Ground clearance - 430 mm. An interesting feature of the machine is the track width equal to 1520 mm. It is alleged that thanks to this all-terrain vehicle can move not only by road or rough terrain, but also by rail, leaning tracks on the rails. 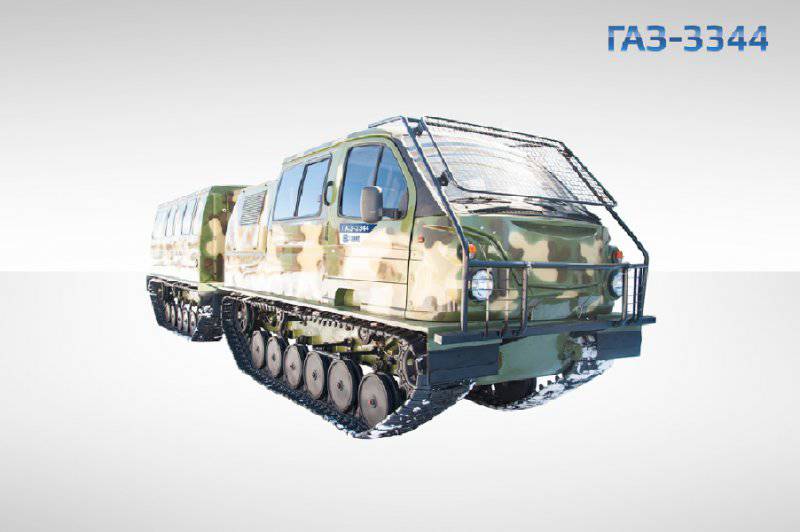 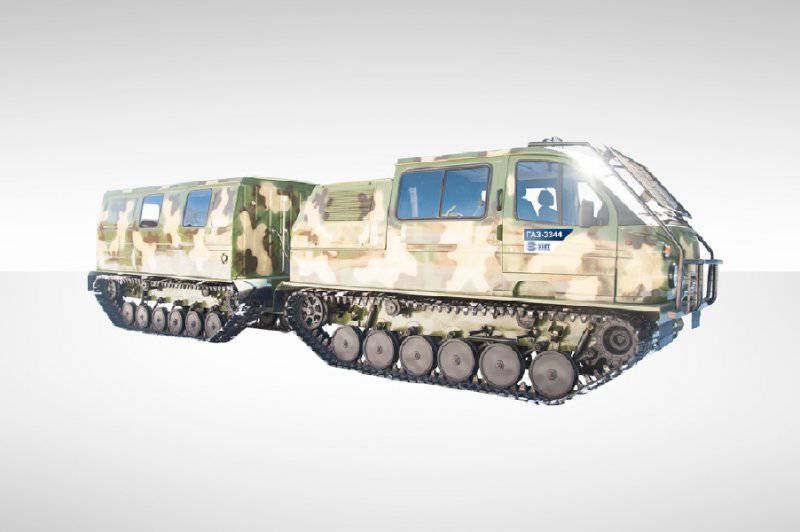 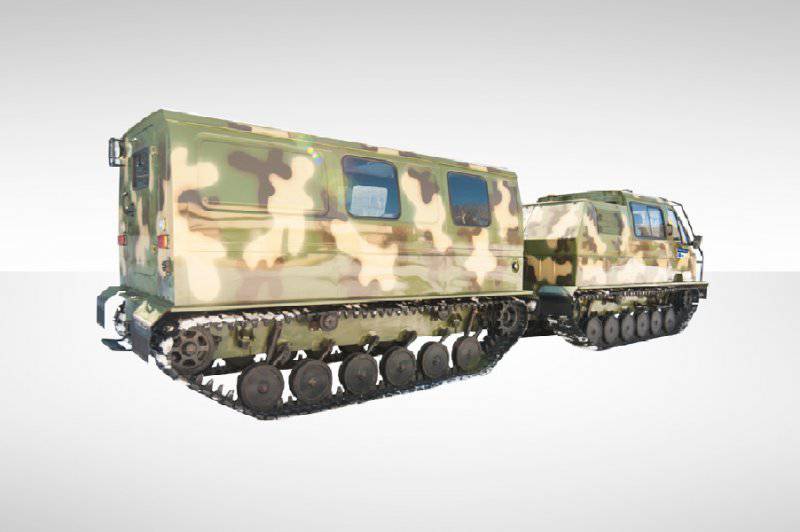 The curb weight of the GAZ-3344 all-terrain vehicle (with 400 liters of fuel) is 8 tons. Considering the maximum permissible load, the total weight of the vehicle can reach 10,5 tons. The average ground pressure is approximately equal to 0,2 kgf per square meter. see The machine is able to climb the 35-degree slope and move with a heel to 25 °. Thanks to the two-link layout, the turning radius of the tracked vehicle is equal to 10 meters.

When driving on a highway, the snow and swamp vehicle is capable of speeding up to 60 km / h. Speed ​​on rough terrain depends on the terrain features. Sealed unit links allow the GAZ-3344 to overcome water obstacles by swimming. Movement is carried out by rewinding tracks. Maximum speed on the water - 6 km / h. When driving on a highway, fuel consumption is 50 liters per km 100. Cruising range - 800 km.

The GAZ-3344 snow and swamp-going vehicle is designed for operation in the Arctic, in Siberia, in the Far East and in other regions with a difficult climate and the absence of an extensive network of roads. The machine can be operated without specialized garages at temperatures from -40 ° to + 40 °. The engine retains sufficient power when operating at altitudes up to 4,6 km above sea level.

In early August of this year, it became known that the Russian Ministry of Defense showed its interest in the GAZ-3344 all-terrain vehicle. As part of the “Day of Innovation of the Ministry of Defense”, the leadership of the military department got acquainted with the GAZ-3344-20 vehicle. In addition, Defense Minister Sergei Shoigu personally tested the all-terrain vehicle in a landfill. The result of this acquaintance was an order concerning the development of new modifications of equipment. The specialists of the Zavolzhsky plant tracked tractors assigned to create five modifications of the all-terrain vehicle, intended for use in the army. 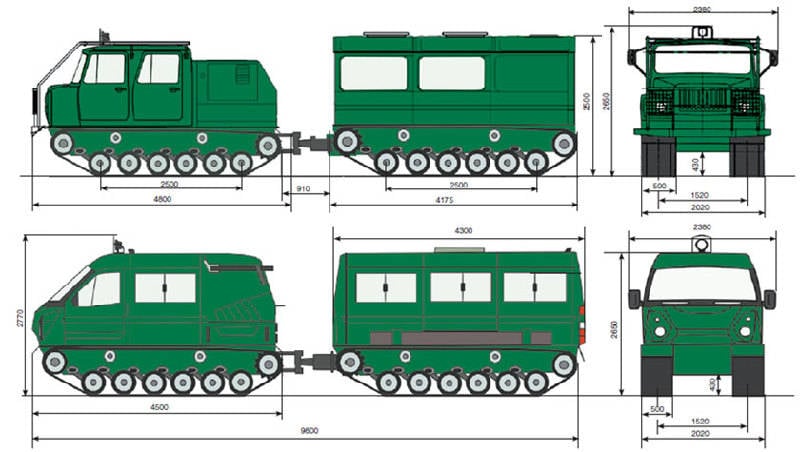 The version of the GAZ-3344-20 all-terrain vehicle, proposed for army supplies, differs from the basic version in protected fuel tanks, the ability to install weapons and the protection system against weapons mass destruction. In this case, all-terrain vehicle for the military does not have a reservation. Commenting on the assignment of the Minister of Defense, the general director of the manufacturer, Valentin Kopalkin, said that the car must pass all tests before the end of the year, and its serial construction will begin in January. Adoption for the supply of the armed forces was planned for February 2015. The capabilities of the Zavolzhsky plant allow building GAZ-600-3344 all-terrain vehicles every year up to 20.

New all-terrain vehicles must replenish the fleet of vehicles of several units of the armed forces. Such equipment should be obtained by parts based in remote regions with poorly developed transport infrastructure and a difficult climate.

In early November, the Ministry of Defense announced the testing of all-terrain vehicles GAZ-3344-20. Employees of the Automotive Technology Test Center and the 3 Central Research Institute of the Ministry of Defense went to the Rybachiy Peninsula (Kola Peninsula), where they have to spend a three-day transition length 500 km. In these tests must pass the test of two dozen types. The results of these tests should affect the future of all tested vehicles, including all-terrain vehicles GAZ-3344-20.