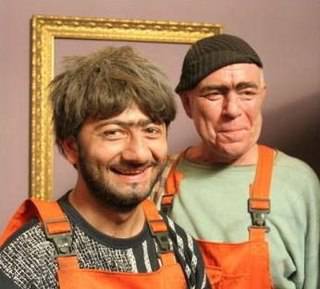 I fully support the initiative of Dmitry Yarosh, who was wanted in Russia for war crimes, to organize our beloved Maidan. The reason is more than suitable: 21 November, an Afghan Tajik wrote on Facebook, it's time to go. And tens of thousands of office hamsters rebelled against the bloody regime of Viktor Yanukovych, as well as Sasha Dentist, who took away the most precious property of every mature Ukrainian - the right to determine their sexual and European orientation. A terrible crime against humanity, Conchita Wust and transvestite beavers, raised the masses on the Maidan.

And now again there is a reason. So it is: 21 November, every year, Ukrainians gather on the Maidan and jump there. There was, however, a period when they missed ten Maidans in a row. But the reason is more than respectful, because Yushchenko, a bitch, with her acne, brought the country to the handle and blew it up, such a nit (this is not a very rude expression), faith in the bright ideals of the dioxin revolution. For ten long years, non-governmental public organizations, network managers, charitable foundations, extremely honest journalists in grant juices, opinion leaders, zadroty, and simply not indifferent citizens registered with psychiatric institutions could not carry out a “gidnosti” revolution. Strange, isn't it? The need was because the regime barbarously kept the hryvnia exchange rate at around eight per dollar, mocked pensioners and state employees, raising social benefits for them for a miserable two to five hundred hryvnias, but somehow failed to gather on the Maidan. Perhaps there was a shortage of an Afghan Tadjik brought up by Levochkin in the spirit of loyalty to the Firtash group, a developed social network, a team from the US Embassy. Hard to say. But, I repeat, everything has finally worked out, and every year people gather in Kiev to overthrow another regime, distorting the bright ideals of the revolution that took place a year ago.

This, I repeat, is a completely logical mini-cycle, to which the country is simply doomed. If not Yarosh, then someone else will definitely gather friends on Independence, set up tents and announce an indefinite protest action. Fortunately, this time all social activists called upon the people of Kiev and the guests of the capital to gather in front of the burnt down House of Trade Unions. What these meetings lead to, we know perfectly well.
The oil tank turned upside down, and the Tajik wrote the same post as last time: “Exit, yes, on the Maidan, you don’t need to take the party flag, you just have to stand and jump sometimes, because five thousand hryvnias work in parliament per month".

All the prerequisites for the “revolution of integrity” (working title) are ripe. First, Putin - x ... lo. Secondly, the hryvnia slipped twice. Thirdly, a bloody regime was established in the country, betraying the interests of the revolution. Fourth, Europe has betrayed Ukraine and does not allow it into its bosom until 2020. Fifth, the agricultural season is over, the piglets are still too early to cut and you can go to work in Kiev, where free feeding and happy pre-Christmas festivities with songs “Palala Shina ..” are planned. I think the unified impulse of the office masses, with the support of the first heroes of Maidan, cannot be stopped. The war has got everyone, so the new Maidan promises to be dynamic and spectacular. The presidential administration was suspicious of something, since they began to focus frantically on yet another favorite holiday of the people - the day of the famine. Large-scale celebrations are planned, and for this purpose a record number of high-quality Ketai candles has been purchased, which will symbolize Putin’s crimes in the thirties of the last century. However, the patriots are serious. Moreover, the compensating show - the Verkhovna Rada of the new convocation with fresh clowns and Europeans - has not begun.

There is a shocking information. Not only did Russian terrorists intend to carry out a terrorist attack against a government delegation of gay Dutchmen who, for reasons that were not clear, wanted to visit the Malyshev plant. This, citizens, is simply nonsense compared to the regime's plan to establish a bloody Christmas tree in the center of Kiev. Everybody understands what is going on. Again, they will disperse children who peacefully thumps in front of a woman on a hefty phallus. No wonder that the Minister of Internal Affairs, Arsen Avakov, said that prostitutes, drug addicts and cattle are gathering on Independence Square. He owns some information.

In the US embassy, ​​the idea of ​​a new Maidan is only being analyzed. The sources of financing have not been determined, since Firtash for some reason decided that the current parliamentary representation is sufficient for him. However, by default, the new hero of the revolution is known, who with an unwavering hand will lead the country to meet the bullets with a cobalt tip, low-power nuclear shells and the Omsk Airborne Division. This time there will be no mistakes with the three leaders.
And no, this is not Yarosh, who, according to analysts from the Psaki office, is discrediting the bright ideal of the European future of the nation. The name of the new hero is Arseniy Yatsenyuk. He, according to the general opinion expressed during the operational redistribution of voting results, is intended to be Adam Smith, Saint-Simon and Kennedy in one person. Perhaps there will even be snipers. Maidan so Maidan. The city has accumulated large reserves of summer rubber and alcohol. If you add a few cash dollars to them (no more than two Hercules airplanes at a time), then you get quite a decent "revolution of integrity." Oh yeah, I forgot to explain why the "integrity". This, of course, is not about the anus of Mr. Lyashko, which, as even schoolchildren know, has remained untouched. In general, sexual parallels in this case are absolutely inappropriate. This is when Yegor Sobolev (the “Self-Satisfaction” organization) is outraged about the disappearance from the prelude to the coalition agreement of the topic of “deputy non-negotiation”, it is possible to laugh. Yegorka knows what he is talking about, since he lost this “non-power generation” during intense discussions with another leader of the second Maidan. Understandably, he insists on the total loss of “non-negotiability”, since such a scenario in the Rada sharply brings Ukraine’s European perspective and increases the number of good and understanding coalition partners.

In this case, we are talking about the territorial integrity of Ukraine, which must be urgently restored. One great power - from Brussels to the Urals. Sounds romantic and impressive. The topic is not a single psychiatric study. But it is in the future. In the meantime, since Putin is x ... lo, one should immediately invade Russia in order to cut off the Kremlin top from gas. Gas is ours. And the Crimea, of course, too. Since Europe frowns in disgust at the sight of patriots in sweat and armor, the time has come to integrate into the EU without any association agreements and other nonsense. What could keep a million people on the Polish border if they came with tires and shields? Never mind! And just then a new page will begin in the era of the Ukrainian state. Everything will end immediately: both the ATO, and the hryvnia, and the dollar. A general lustration and purification of power will be held, during which only the veche of Maidan will remain. And he, in the end, lyustriruyut. The nation will remain in its purest form. No impurities. And start a new Maidan. Ukraine is a distinctive, unique state, which can exist only in the format of revolutions. Amen.