30 2010 June
0
On Wednesday, in Zhukovsky near Moscow, the First International Forum "Technologies in Mechanical Engineering - 2010" opened, which has already been called "tank MAX ”by analogy with the famous air show. This is the first large-scale exhibition of ground and armored vehicles held in Moscow - so far such events have been organized only in Nizhny Tagil and Omsk.

For the public, the organizers of the exhibition have come up with a very spectacular show, demonstrating the dynamic capabilities of Russian combat vehicles. Even a choreographer from the Bolshoi Theater was invited to stage a “tank ballet”. This, of course, is wonderful, but it is still interesting to look at the participants of the performance from a slightly different point of view. 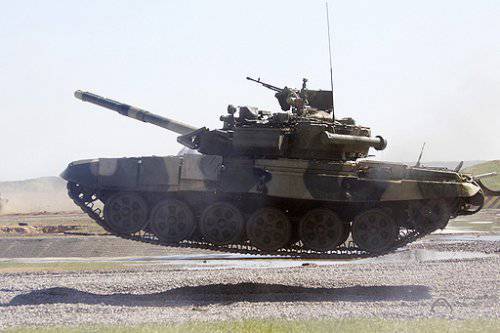 The program of performances declared tanks T-80 and T-90. It would seem, what is this new? The first is not commercially available for several years, the second more than 10 years ago was adopted and stands in the series. Meanwhile, the logic of development of tank building is such that on the basis of some initial sample during serial production (and often after its completion) many modifications are created, sometimes strikingly different from the progenitor. Thus, the T-72B tank in combat effectiveness was one and a half times higher than the original T-72, and its modification, the T-72BU, adopted under the symbol T-90, already doubled. Accordingly, T-90 has undergone changes, first of all, in the direction of increasing the security and dynamic properties of the machine.

So, T-90А, shown at the dress rehearsal of the tank show, is equipped with the “Relict” dynamic protection system instead of the usual “Contact-5” on such machines. It is believed that the armor resistance of the tower with such equipment is equivalent to 1350 mm solid steel armor (with "Contact" - 1200 mm), which is believed to save the tank from damage by modern Western armor-piercing shells such as M829X2 and TOW-2A type anti-tank missiles.

In addition, a modern French-made thermovision complex, manufactured by Thales Catherine FC, is installed on the sample, which is also used to equip many modern Western armored vehicles. Such a device allows armored vehicles to conduct combat operations in low visibility conditions at night, hitting targets at the same distance as during the day. Until now, Russian tanks at night were practically non-capable.

Thermal imager is also useful in the daytime: according to the company, a single “soldier” target with the help of Catherine FC can be detected at a distance of 5 km, and identified with 2 km. Tank-type targets are detected on 10 – 11 km in narrow viewing angle mode and on 4 – 5 km in wide viewing angle mode. Modern optics of the Russian armored personnel carrier allows detecting an enemy tank at a distance of 2 – 2,5 km.

The agreement on the supply of 900 thermal imagers of this type was made by Thales and Rosoboronexport in 2007 year, and 16 of June of this year in Paris signed an agreement on the licensed production of these devices in Russia at the Vologda optical-mechanical plant. At the same time, it can be expected that the cost of the device produced in the country will be reduced compared to imported products: now it, according to some information, is about 4 million dollars. Note that in this case we are not talking about a screwdriver assembly, but about the complete localization of production, including such key instrument components as lenses and IR arrays.

It is believed that after abandoning the production of a promising battle tank "195 object" and, most likely, closing the Burlak theme (creating a single combat compartment with a two-line automatic loader with full automation of the ammunition placed in the tank for new and modernized Russian tanks) the form will be purchased by T-XNUMHA for the Russian army. Alas, the Russian tank industry will be able to create a promising combat vehicle, but it is unlikely to master the mass production of such expensive products in the absence of massive (about 90 units per year) purchases: the tank will turn out to be "platinum". 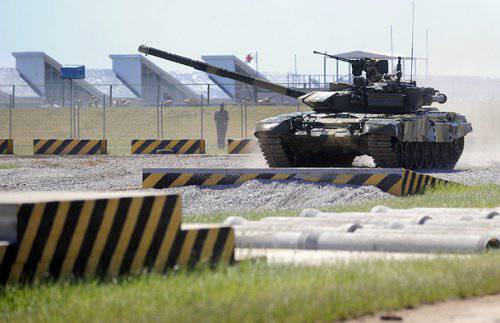 
By the way, the tank also saw the tank “188M object”, a very deep modification of the T-90 (“188 object” under development). This machine was shown to Prime Minister Vladimir Putin in December 2009 of the year before a meeting on the development of Russian tank construction, which was held in Nizhny Tagil.

The “188M object” is created as an initiative-based development of the Ural transport engineering design bureau, as opposed to the Burlak design and development project, conducted in the Omsk design bureau. Called OCD is a sample illustrating the mess that has formed in the industry, and the reckless spending of public funds. OCD "Burlak" provides for the creation of a unified fighting compartment for the modernization of primarily tanks T-90 and T-72. At the same time, UKBTM OJSC - the developer of these machines - is constantly working to improve the design of the T-90 MBT and the modernization of the T-72. It would seem that it should be engaged in this work, but no ... ROC Burlak was transferred to Omsk KBTM, which is a very good technological KB, but having weak capabilities in new and even more promising design. Moreover, the KBTM has not and had nothing to do with the T-90 tank. And such an organization is entrusted with such difficult work! As a result, the advance work was successfully eaten, “inventions” were protected by patents, and Burlak itself was not and is not. According to some reports, KBTM cannot adapt its BO to the T-90 "cart" and has already requested technical assistance from UKBTM. In addition, the mass of the developed structure is such that even such a powerful undercarriage as Tagil's T-90 does not withstand it. The excess of any allowable load norms is so great that it affects the resource in the most disastrous way. Of course, a negative result is the same result, but let me ask, why would GABTU then arrange a tender for the development and supply of simulators for this most failed Burlak? Why not allocate funds UKBTM to complete work on the "Object 188M" - the next milestone improvement T-90?

“The 188M object” is distinguished, first of all, by a completely new tower design, the protection of which is almost devoid of weakened vulnerable zones and is all-round. Not only frontal, but also side projection and feed are significantly better protected. The most relevant in terms of protection is improved roof protection. The machine has a significantly improved fire control system (LMS). A distinctive feature is the inclusion in it of a three-channel thermal imaging panoramic sight of the commander. During the development of the LMS, the developments obtained during the highly successful OCR “Frame-99” (development of a tank support vehicle - BMPT) and “Slingshot-1” (including installation on guns of increased accuracy (up to 20%) 2А46М-5 or the latest 2A82). The smaller dimensions of the scopes and their very serious protection against small-caliber artillery fire, bullets and fragments of large caliber shells attract attention. This is especially noticeable against the background of the Ukrainian Oplot-M tank presented in March 2009. Currently, the “188M object” exists in one copy, and the decision on its production has not been made, although this may be the near future of Russian tank construction. 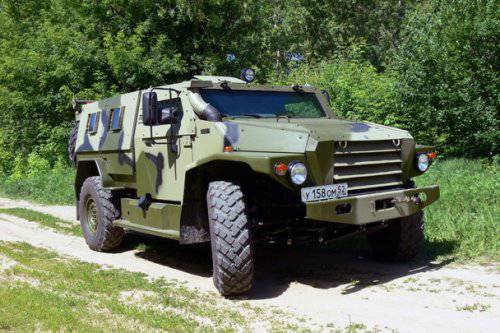 The International Forum "Technology in mechanical engineering-2010" presents a series of protected cars "Wolf" produced by Arzamas plant. The car has a new concept of body armor and terrain.


Among other new products, the Volk armored car developed by the Military Industrial Company, a division of the Russian Machines holding, the main shareholder of GAZ OJSC, will be demonstrated for the first time at the exhibition. "Wolf" - a direct competitor of the Italian armored car IVECO LMV. The newspaper VIEW has already told readers about the Italian armored car in connection with the possible decision of the Ministry of Defense to purchase these machines for the needs of the Russian army. If such a decision is made, the manufacturer of “Italians” will become KAMAZ, openly seeking to become the monopoly supplier of all sorts of special chassis and military trucks.

Both cars belong to the class of “patrol armored vehicles”, or MRAP (Mine Resistant Ambush Protected - “protected from undermining and ambush attacks”). These are wheeled armored vehicles with enhanced mine protection. Most of the cars of this type have a large ground clearance, a V-shaped bottom, well opposed to fragments and allowing to effectively dissipate the energy of the explosion (one of the exceptions is the German Dingo-2 armored car, where the flat bottom is protected by composite armor). For the first time such armored cars began to be used by African countries (Rhodesia, South Africa), later other countries adopted their experience (the US began mass production of MRAP machines after the invasion of Iraq). The only Russian armored car of this type is the SPM-3 "Bear" also produced by "MIC", as, by the way, and the SPM-1 "Tiger", which is also present at the exhibition. The “wolf” is somewhat smaller than the “Medved” (created on the basis of the units of the military truck “Ural”), but larger than the “Tiger”. At the same time, for the first time in our country, this armored car carried out armor protection in the 6 class, providing all-round protection against shelling from the main types of small arms weapons. 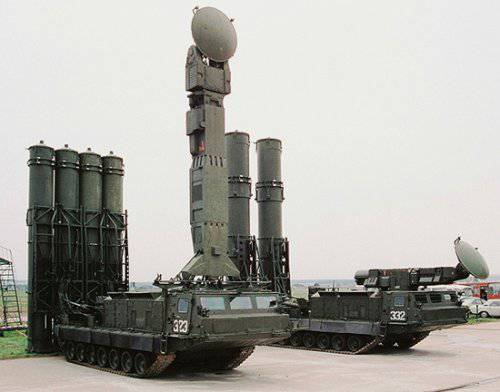 According to a press release of the company, “a feature of the Wolf family of cars is that it was originally developed both in an armored version due to the installation of hinged frame-panel armor and mine protection with the expectation of a further increase in its level, and in an unarmored version . Installation and disassembly of armor protection can be carried out by personnel without the use of special tools and devices. " By the way, this “modularity” of body armor favorably distinguishes the domestic model from the Italian one. The car is equipped with a 240-strong engine of the YaMZ-534 family. In the case of a decision on the adoption of weapons, the Volza will be produced by the Arzamas engineering plant. 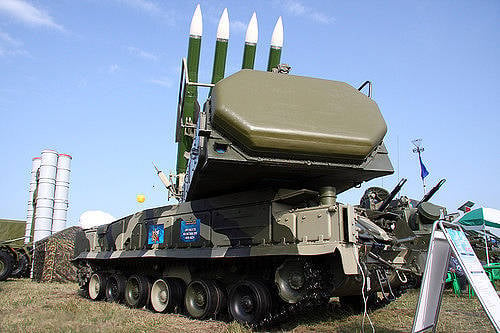 In addition to the new products described, the exhibition will feature many interesting samples, including the Buk-M2E and Antey-2500 anti-aircraft missiles (C-300В), special chassis and military trucks KAMAZ and URAL, BTR, BMP and BMD, in total more 90 samples of military equipment - both in static exposure and in
movement.