Orban and Zeman against 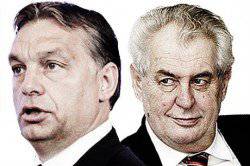 The two former socialist countries are turning into the most convenient partners for Russia. Hungarian Prime Minister Viktor Orban (pictured on the left) and Czech President Milos Zeman openly challenged the anti-Russian course prevailing in the West. They are already trying to pull up, but both politicians are adamant. For them, the interests of their own countries are above the aspirations of the US and the EU to punish Russia in connection with Ukraine.

Orban put on the "South Stream"

Developing the theme, Orban made some lunge against the Germans. “Germany has already built the Nord Stream gas pipeline, with the help of which it is able to bypass Ukraine as a potential source of danger. And we want nothing more than Germany wants. It is necessary that Hungary be provided with gas even in the event that any problems arise in Ukraine, ”the prime minister stressed.

The actions of Orban and his associates in the FIDES party, who have a constitutional majority, fit in perfectly with the course of Hungary in recent months. It is enough to cite one statement by the head of government on this topic. “The Western policy of sanctions, which are the result of Russia's actions, has harmed us more than Russia ... In politics, this is called“ cutting the branch on which you sit ”.”

A party ally of Orban, the chairman of the parliament, Laszlo Köver, was not at all shy about expressions. “Attempts by the EU to dictate to Hungary what to do will cause the authorities to think about slowly and carefully withdrawing from the union,” he said recently.
Such harsh statements allowed themselves except in the UK. Even the famous Euroskeptic ex-Czech President Vaclav Klaus expressed himself more cautiously.

This approach of the Hungarians does not like not only the EU. It annoys Americans even more. The US Chargé d'Affaires in Budapest, Andre Goodwood, has openly called on Hungary to support sanctions against Russia, rather than worry about the situation of the Hungarians in Ukraine. Earlier, the Americans had banned the entry of several officials from Orban’s entourage into their territory. For an ally of NATO case unheard of.

In Hungary itself, the opposition intensified. Its representatives took to the streets of Budapest in protest against the introduction of a tax on the Internet. It is noteworthy that representatives of the EU incited people to open discontent. The tax was eventually abolished, but the question hung in the air as to whether they were going to arrange their Maidan in Hungary in order to eliminate Orban, who had become so independent. In any case, its demonization both in the Hungarian and in the Western press is in full swing.

Now they are attacking Czech President Milos Zeman. Belonging to foreigners (mostly Germans), the Czech media simply refers to him as “Putin’s lawyer.” During the trip of the head of state to the city of Opava, one of the local activists called him a “Russian cockroach”. Every now and then there are calls for the resignation of Zeman, because he allows himself to use foul language in a public place.

The sin in the form of addiction to a strong wit is found by the Czech president for a long time - even when he served as head of the government. However, such a strong attack on him in this regard has not yet been. Obviously, the point is again in his vision of relations with Russia and what is happening in Ukraine. Zeman on the air of the Czech Radio expressed something that no Western politician had yet decided on.

“I have no reason to consider Khodorkovsky a political prisoner, although this is an excellent excuse to clear myself. I rather believe that it was a schemer, ”said Zeman. And that was just the beginning. Then he walked around Pussy Riot, translating the name of the group into Czech and using profanity here. “In my opinion, this is a pornographic group that at least has criminal responsibility for the ugliness in the Orthodox church,” the Czech leader noted.

And in a conversation with the Chinese media Zeman called what is happening in Ukraine "civil war" and spoke out against sanctions against Russia. “I think that sanctions are leading to a new cold war. They inhibit the economic development of all countries. And not only those against whom they are directed, ”Zeman explained his approach. Earlier, in the spring, the Czech president openly called the current leadership of Ukraine "bandits." So sharpness is not new to him.

But the Czech Republic is a parliamentary republic, and it is much more dependent on the government. Premier Bohuslav Sobotka expressed much more cautious, but he does not like the sanctions. “We have a relatively large share of exports of engineering products going to Russia. So it is obvious that a new “iron curtain” on the border between Ukraine and Russia will harm our country in the long run, ”he said in an interview with the Parlamentní listy.

“It is impossible to imagine a stable existence of Europe without any form of cooperation with Russia. This concerns not only economic interests, but also issues of political stability, security, and human rights. On all these points we must keep in touch with Russia. Isolation and attempts to drive Russia into a corner in the future can be a source of long-lasting problems, ”Sobotka stressed.

Money and national dignity of the Hungarians and the Czechs

There is a clear disagreement of the two Central European countries with the policies pursued by the EU and the USA. Imagine this 15 years ago it was difficult. Then both Hungary and the Czech Republic rushed to the European Union at full speed and already entered NATO, while Orban considered relations with Russia to be a “remnant of the past” at that time.

However, the insult to the USSR began to pass slowly, and then it turned out that European bureaucrats and Americans put pressure on the Hungarians and the Czechs no less than the Soviet leadership.
In the new conditions, the former socialist countries had to re-realize their interests. And here it turned out that they depend on Russia quite strongly. Take at least energy issues. Both the Czech Republic and Hungary receive most of the gas from us. In addition, for less dependence on Ukraine, they need to develop nuclear power plants. And the Hungarian nuclear power plant in Paks and the Czech stations in Temelin and Dukovany are of the Soviet type. And their expansion is possible only with the participation of Russia.

Products of Hungarian agriculture are not needed by Europe, but in Soviet times they were in demand. There is almost nothing left for “European-integrated” Hungary. The Czech Republic is doing better, but here without Russia it is nowhere. Their trams, locomotives for railways, and the Skoda cars are obviously more necessary in the East, and not in the West. At least, until Russia has not fully restored and developed the relevant industries.

And how do you forget that 150 thousands of Hungarians live in Transcarpathia? They should be thrown at the massacre of the "Right Sector" for the sake of some anti-Russian unity? And where is the human rights? It is clear that Hungary can not deny the interests of fellow tribesmen. As for the Czech Republic, it accepts the Volynian Czechs fleeing the war-torn country. They are ten times smaller than Magyars, but they are. About them, too, need to forget?

The feeling that decisions are made not in Budapest or in Prague annoys so many Hungarians and Czechs. The Magyars were initially accustomed to some of their specialness and exclusivity - their language is not like anything, the kitchen is also very peculiar. Their ancestors were nomads, while the rest of the Europeans did not. The Hungarians openly spoke against Austria and against the USSR, so with a sense of national dignity, they are fine.

In the Czechs, all European cataclysms were severely beaten - from the Hussite Wars of the XV century and the Thirty Years War of the XVII century, and ending with the Munich Agreement of 1938. The Czechs remember very well that they were led from Vienna, Berlin, and Moscow. Now they are trying to dictate from Brussels and Washington - and as a result of following the “pointing finger”, the Czech Republic will lose not only national dignity, but also big money.

Orban and Zeman are the spokesmen of the moods of that part of Europe for which national dignity remains a non-empty phrase.
They are not allies of Russia, and often scolded us. But they try to conduct an independent course, based on the interests of their own states. They brightly put Hungary and the Czech Republic on the world map, showing that not always everything should be decided by the “main” centers of power.

Americans are not used to this. And the euro bureaucrats too. Obedience and following the course they worked out remains a dogma for them. Not allies, but vassals, not independent EU member states, but cogs in a pan-European machine. So they see the same Hungary and the Czech Republic. However, two countries in Central Europe are trying to resist, completely rejecting the thesis that the former socialist countries fully approve of the US course. This is not the case, and the current behavior of Orban and Zeman on the issues of Russia and Ukraine clearly shows this.