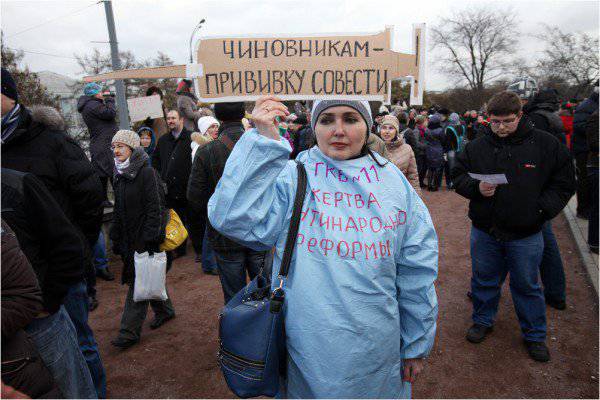 After mass protests of metropolitan physicians, city and federal authorities for the first time in many years were forced to start at least a semblance of dialogue with the professional community. Doctors are trying to explain that the situation is not as bad as they think.
Doctors are absolutely not satisfied with the answers, a new rally is scheduled for November 22, which may outweigh previous performances.

However, health officials are at least trying to talk to the doctors. And the federal ministry stresses that it is not at all in agreement with the measures taken on the ground. These differences have already helped to prevent the closure of hospitals several times and led to compromises during the conflicts in Izhevsk, Ufa, and Rzhev. So metropolitan medicine still has a chance.

Meanwhile, the same processes are unfolding in the field of education as in health care.

Across the country, there is a reduction in the number of teachers, schools are being closed, curricula are being redrawn, and rules for teachers and students are constantly changing.
At the same time, when the metropolitan health department tries to explain to the public exactly how the mass closure of hospitals, the dismissal of doctors and the reduction of medical staff will help increase the chances of citizens to receive medical care, the leaders of the Moscow education set about destroying special schools.

The famous school "Intellectual", intended for the education of especially gifted children, is merged with the district school - in fact against the will of the teachers and parents of both institutions. At the same time, the liquidation of correctional schools for children with disabilities began in Moscow. The directors of these schools protest, argue with officials from the education department of the government of the capital, but they cannot achieve anything. In protest against the policy being pursued, the directors refused to meet with the head of the department, Isaac Kalina ...

Problems in education and health are remarkably similar. In both cases, market reforms led to a rapid disorganization of the entire system, which was built on completely different principles. The idea of ​​“per capita funding”, promoted by officials in both cases, suggests that the more patients are filled into the ward or students in the class, the better.

Wins the one who neglects the individual characteristics of the student or patient, reduces the quality of their work, replacing the care of a particular person with a formal "conveyor". The fact that due to the reduction in the number of schools, hospitals, clinics and kindergartens, people just have to spend more time on the road, no one thinks at all. About the fact that in the case of emergency medical care, the loss of time may result in the death of the patient, you can not say.

Officials from education and health, of course, far from being idiots. And all the problems that arise are well known to doctors and teachers.
And if they didn’t know, they would have had the opportunity to deal with all this long ago, the benefit of publications and public speeches of outraged professionals was more than enough. But the fact of the matter is that the problems and hardships of some turn into benefits and advantages for others. The worse things are with state medicine and public education, the less budget places for students open in higher education institutions, the more difficult it is for citizens to enjoy their rights guaranteed by the constitution, the more chances they will turn to the private sector and simply buy the “necessary services”. Of course, far from everyone is willing and able to pay, but our reformers do not consider people who do not have free cash to pay.

The fundamental difference between the situation in medicine and education, however, is that if at the federal level, health care managers still show some restraint and try to avoid extremes, the Ministry of Education and Science, headed by Dmitry Livanov, has long acquired the reputation of the “ministry of ignorance ". Even quite moderate and cautious in the estimates of the deputies from the "United Russia" at a meeting of the State Duma 12 November, after hearing the report of the Minister of Education, attacked him with criticism. Representatives of Fair Russia demanded the resignation of D. Livanov at all. The first deputy chairman of the education committee, Vladimir Burmatov, speaking on behalf of United Russia, complained that this was, at best, an “accountant’s report”. The minister talked about where and how much the budget billions were spent, but he categorically avoided talking about the development strategy of the industry and the principles of the reforms.

Alas, if Minister D. Livanov had no strategy, this would not be the worst.

There is a strategy. It is just that it is so inhuman, so clearly directed against the interests of Russia's development and so consistently focused on the destruction of national education traditions that it is simply impossible to publicly voice it from the rostrum of parliament.
If the minister openly declared the goals and objectives of his policy, he would have to not only be driven from the rostrum and removed from office ...

However, despite the constant omissions, silence and propaganda by the ministry, citizens are already well versed in the content of its activities. It is no coincidence that according to public opinion polls D. Livanov regularly turns out to be the most unpopular of all the ministers of the Russian government. Even devoid of any content "accounting" report does not hide the real picture of affairs in his department. They see everything perfectly: the huge funds spent by the ministry are not only spent inefficiently, but also simply go to finance various projects that disorganize and destroy the educational system. Starting from the introduction and continuous reformatting of the Unified State Exam and ending with the introduction of more and more new forms of bureaucratic reporting and conducting a rating of “university efficiency”. Its result was the general confidence in the inefficiency of the ministry itself and the illiteracy of its experts: it is enough to recall that one of the criteria for "effectiveness" in this rating was the number of square meters that a particular university had.

Last year's war of D. Livanov against the Russian Academy of Sciences also did not add popularity to the minister.

However, due to public protests and the scientists themselves, the initial plan for the liquidation of the academy had to be postponed. And the whole история ended with a compromise, which at least delayed for several years the final destruction of national science.
But it is easy to guess that the head of the ministry, being a persistent and not sentimental man, did not leave his plans and was only waiting for an occasion to resume the offensive.

So far, the “accountants” from the ministry come up with new, sophisticated financing schemes that block practical work on the ground, and the “ideologues” remain idle. Year after year, with a direct filing of officials, a campaign is unfolding, aimed at making all teachers, university professors and doctors corrupt, illiterate, incompetent. We are told that it is teachers and doctors who are the two most corrupt groups in our society. What a service to them bureaucracy of all levels!

At one time, it was the creation of a large-scale nationwide system of health, education and science that helped turn our country into a leading world power no less than the creation of a modern industry and a powerful, well-armed army. We can recall the famous phrase of the professor of geography from Leipzig Oscar Peschel, who in July 1866, after the victory over Sade, won by the Prussian army during the Austro-Prussian war, summed up: “Public education plays a crucial role in the war when the Prussians beat the Austrians, was the victory of the Prussian teacher over the Austrian school teacher. "

It is the system of education and training - including, by the way, vocational education in our pen - provides the country with a chance to occupy a worthy place in the world, creates development potential and gives citizens a sense of confidence, self-esteem, civic dignity, and a reasonable pride in their country. During the years that have passed since the collapse of the Soviet Union, we have lost a significant part of the industry, but as long as there are educated people in Russia, we can recover a great deal, and even more - create it anew.

A blow to domestic education is a blow to the very heart of the country, an attempt on its future. Especially when the blow falls simultaneously on medicine. Therefore, the struggle now unfolding does not boil down to the question of the future of individual schools, universities, or hospitals.

The question is about the future of the country. And about freeing the most important sectors that provide strategic prospects for the country's development from the dictates of liberal reformers, who see them as just an additional segment of the “services sector”.
The defeat of health, education and science should be stopped, and its organizers punished. The question is who will do it, how and when.