November 18, 2014
62
Airborne troops and various units of other types and types of troops need highly mobile equipment needed to perform various tasks. For example, earlier in many armies of the world used motorcycles equipped with machine-gun armament. In recent years, ATVs have become increasingly common in foreign countries. Such a technique, despite some specific features, can be used with high efficiency for solving various problems. 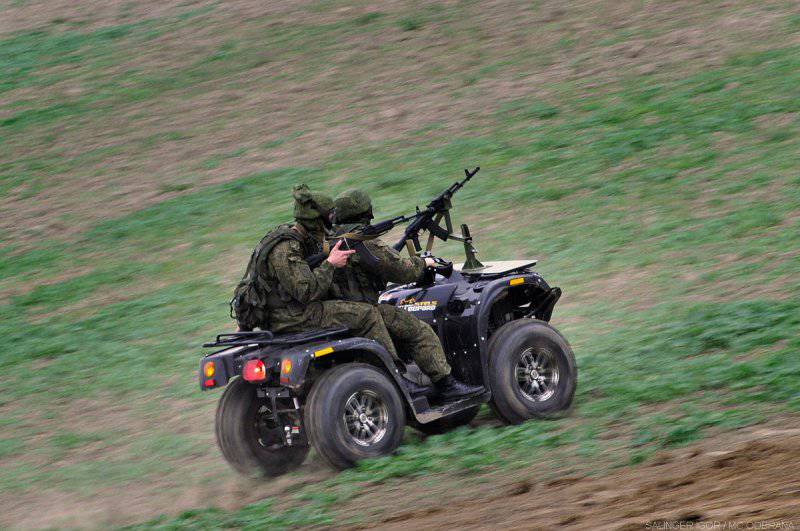 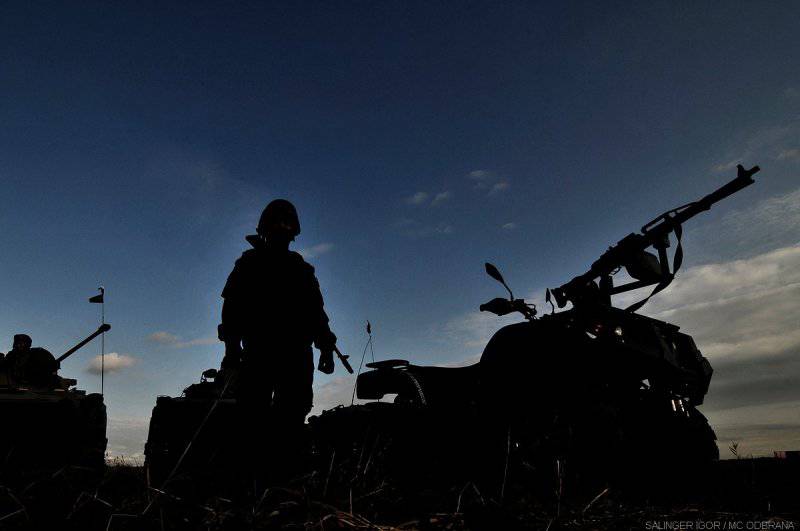 Not so long ago, the Russian military paid attention to quad bikes. Similar equipment has recently appeared at various exhibitions several times. In addition, several ATVs were used during recent joint exercises held in Serbia and other similar events. According to the “Red Star”, during the recent exercises of the 98 Airborne Division, the reconnaissance of one of the parties, using quad bikes, launched a quick attack and found the conditional opponent off guard. At the same time, the actions of the patrol were so swift that the observers needed an explanation from the training leaders.

Indeed, ATVs are of particular interest to the armed forces, since they can be used to solve a number of tasks. For example, they can be used to support the work of reconnaissance groups in the near rear of the enemy. In some cases, ATVs have significant advantages over the equipment of other classes. They can move freely in the sand, through dense landings, in wetlands, etc. It is noted that due to low pressure on the ground, ATVs can move even along anti-tank minefields. In particular, such an opportunity in the course of recent exercises allowed the reconnaissance patrol to complete the task, since the conditional enemy was limited in its capabilities due to the presence of minefields.

For use in the Russian armed forces are now offered two quad bikes, equipped with weapons and special equipment. Both new developments are being tested and are also being tested as part of an exercise. It should be noted that domestic companies created two military quad bikes at once, which can have positive consequences associated with competition.

The first of the ATVs offered is the Tulchanka. It was this technique that was sent to Serbia to participate in the exercises. The project of conversion of a civilian ATV into a combat version was developed in the Tula TsKIB SOO. As the basis for the “Tulchanka”, the serial civil ATV Stels ATV 600 Leopard ATV, developed by the Velomotors company and manufactured by the Zhukovsky Motor-Building Plant, was chosen. In accordance with the “Tulchanka” project, the base machine receives navigation equipment and weapon installation systems. 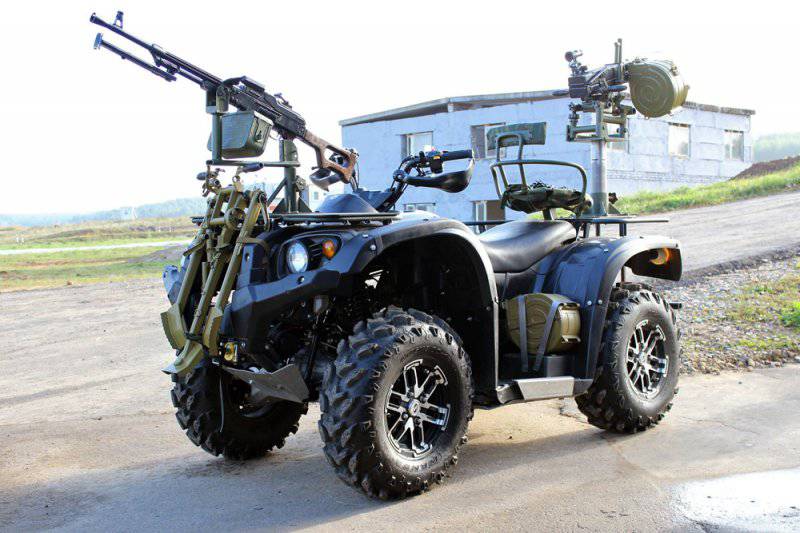 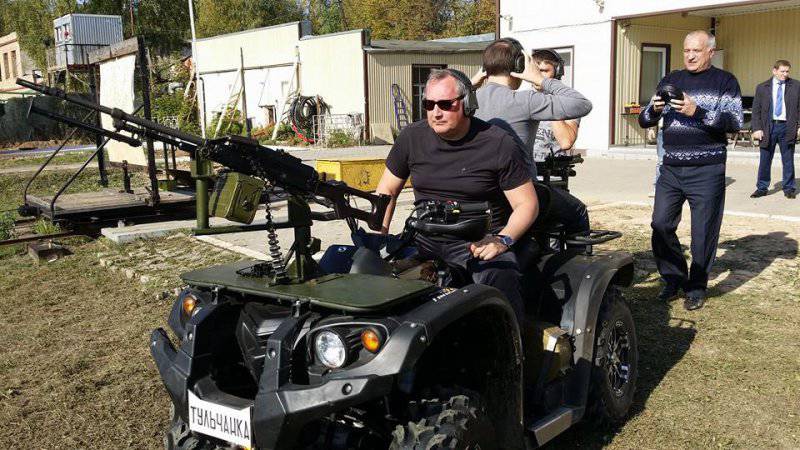 The ATV 600 Leopard ATV has a welded tubular frame on which all units are mounted. The car is equipped with a four-stroke single-cylinder petrol engine of cube 594. cm and power xnumx hp The engine consumes petrol with an octane rating of at least 39. Engine torque is transmitted to all four wheels via transmission shafts. The transmission includes a centrifugal clutch and a V-belt variator. To start the engine is equipped with a manual and electric starter.

The wheel running gear of the Leopard ATV is equipped with an independent lever suspension bracket with spring and hydraulic shock-absorbers. The front wheels are 175 mm, the rear wheels are 220 mm. The wheels of both axles have hydraulic disc brakes. Wheelbase - 1365 mm, clearance - not less than 320 mm.

The ATV 600 ATV ATV can be equipped with a satellite navigation system and communication equipment. The front trunk of the base car allows you to carry up to 25 kg of cargo. In the case of the ATV “Tulchanka”, a supporting platform is installed on the front trunk, on which, in turn, the necessary weapon. It is alleged that the "Tulchanka" can carry machine guns, including large-caliber, or an automatic grenade launcher. On the rear cargo platform there is a second mount for weapons.

The crew of the quad may consist of two people. One of them drives the car and controls the front weapon, the second is located behind him and is responsible for the shelling of targets in the rear hemisphere. According to some reports, to protect the crew, the quad is equipped with a special Kevlar tent, which should reduce the risk of people being hit by bullets or shrapnel.

According to reports, the machine "Tulchanka" was created by order of the Airborne Forces. The paratroopers and the commanders of the troops came to the conclusion that such equipment was necessary, which should be used for the rapid transfer of units in cases where the use of armored personnel carriers or vehicles is not justified. Such a purpose allows to put up with the inherent deficiencies of ATVs.

In September, the Tulchanka quadrocycle was shown to Deputy Prime Minister Dmitry Rogozin. The officer and representatives of the army special forces tested the car in the conditions of the landfill and highly appreciated it. Nevertheless, certain wishes were expressed. According to D. Rogozin, the car is too noisy, does not have sufficient protection, and also does not provide the required convenience of the "stern" arrow.

ATVs "Tulchanka" already assembled in series and transferred to the troops. So, in the recent Russian-Serbian exercises, a dozen new machines were used. In total, it is planned to purchase 400 ATVs for the Airborne Forces. In the future, it is possible to purchase a certain number of snowmobiles equipped with special equipment and weapons. They will be used to perform combat missions in the Arctic.

"Tulchanka" based on "Leopard" is not the only option for ATV combat offered to the troops. Of particular interest is similar equipment based on the machines of the Russian Mechanics company (Rybinsk). Rybinsk enterprise presented two so-called trials at once. ATV: PM 500 4x4 and PM 500 6x4. It is known that these machines have already been tested at several ranges of the Ministry of Defense, the results of which resulted in the formation of a list of necessary improvements.

The four-wheeled all-terrain vehicle PM 500 4 x4 is somewhat similar to the ATV 600 Leopard, although it has several noticeable differences. So, the Rybinsk machine has a single-cylinder engine with a volume of 503 cube. cm power xnumx hp The ATV is equipped with two platforms for cargo placement, which can be used both for its intended purpose and for the installation of weapons.

The all-terrain vehicle PM 500 6х4 has a three-axle wheeled part with two driving axles. Changing the chassis design allowed the machine to be equipped with a relatively large cargo area in the rear. In terms of its design, characteristics and capabilities, the PM 500 6x4 is a modified version of the RB 500 4x4 with two additional wheels and a body for cargo. Declared the possibility of transportation to 400 kg of various goods.

Motor-all-terrain vehicles of the "Russian Mechanics" have already been tested at the sites of the Ministry of Defense. The tests were conducted in different climatic conditions, which allowed to determine the strengths and weaknesses of the equipment. According to the test results, a list of necessary improvements was prepared, approved by the General Staff. After correcting the identified deficiencies, all-terrain vehicles can be put into service in order to equip the various units that need such equipment.

Recent ones news about the procurement by the Ministry of Defense of quadrocycles with weapons suggests that the Russian military began to learn from foreign experience. In a number of countries around the world, such equipment is already being used as a vehicle for transporting fighters and weapons in certain conditions. Now it is up to the Russian military to master the new equipment.

However, the use of new technology, as international experience shows, will be quite limited. With all its advantages in the form of good speed and maneuverability, ATVs and all-terrain vehicles have a significant disadvantage - the inability to provide acceptable crew protection. The architecture itself of this technique does not allow the use of sufficient reservations, since it will negatively affect a number of characteristics. Thus, combat ATVs can be used only in situations where high mobility is required from a vehicle first, and not firepower or a high level of protection.

According to reports, the Airborne Forces plan to acquire four hundred ATVs "Tulchanka." Such a number of new equipment will allow equipping all units that need it. At the same time, however, new ATVs cannot and should not displace other vehicles. Thus, various vehicles will remain the main means of transporting people and goods, and the role of the main vehicle on the battlefield will remain with specialized armored vehicles.