Kiev is in panic

November 18, 2014
101
“There is no reason to panic, we have taken serious steps in the preparation of our armed forces over the past two months ...” Poroshenko told his confidants for television cameras. What was it? The president of United Krajina has already turned into a brainless dill, once he makes such life-affirming statements, and this is what provokes panic. After all, he himself confirms, even if indirectly, that there is a reason for panic, that it already exists, since he himself mentioned it. 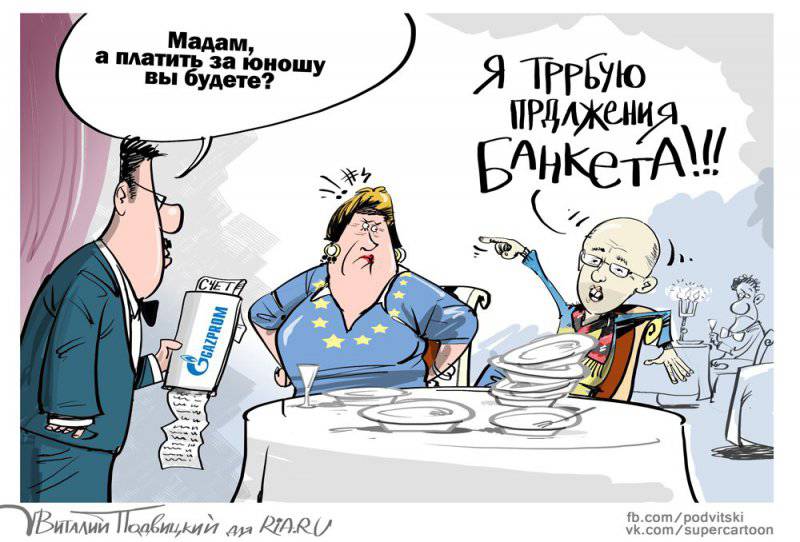 The war rabbit immediately added salt to the compote, saying that the main task of Ukraine is “building an army that can stop Russian aggression.” In other words, Krajina does not have such an army now. The same, what is, causes a panic?

The impending energy catastrophe, the threat of freezing of the country, which, in addition, risks remaining without electricity, without electricity, and the countdown has already gone for weeks - it's all not a threat? They could be solved by establishing a dialogue with Donetsk and Lugansk, but instead Poroshenko and Yatsenyuk, under the leadership of the American embassy, ​​will build an army ...

Although, in general, this may become a well-known way out: if you mobilize everyone (they are already considering conscription to the army of women) and drive them to the barracks for a soldier's ration, then the heat and light remaining in the country to these barracks may be enough.

Everything says that Kiev was gripped by a serious panic, and the president is completely dismissive about Freud. After the “fair elections”, the Verkhovna Rada is mired in scandals and squabbles: the composition of the coalition government cannot be agreed, the supporters of the European choice, only for building the army and find a consensus, or do everyone have spare airfields on their minds?

The results of the elections to the Rada are deplorable: the oligarchs Poroshenko and Kolomoisky cannot divide power and "United Krajina", and their actual dual power was established in the country. Yatsenyuk, after all, is kept by Kolomoisky, and both of them are on a short leash at the American embassy in Kiev on Tank the street. It seems that from Ukraine they want to build a tank, with one-time use.

In these “transparent” elections, Kolomoisky still managed to buy at least 100 deputy mandates, ukropolitologi say, therefore the bodyagod in power in Krajina forever, until this Parliament collapses. The only thing that unites Kolomoisky and Poroshenko is the common enemy in the face of Russia, and the common customer of their policies is Washington, therefore they find a consensus only in matters of army building and war.

In general, the situation in Krajina is really awful, so that panic can be understood. A simple way out is the continuation of the military adventure in the Donbass, everything can be written off to it. According to the tradition of blaming Russia for everything, it was she who quickly wrote off all the results of two-month strenuous efforts and all the reserves. But there is no chance even for short-term success, and the risk is high right on the teeth, and roll back to Kharkov: Poroshenko has already ordered to prepare him for defense.

The economic and political catastrophe is becoming more and more real, therefore there is a panic, because coal reserves at the CHP are only enough for weeks of work. Stalemate, even if you start a war - and surrender to captivity.

In this situation, the excerpt of Russia, its president, is striking. Now we are going to supply coal to the dill president and the fighting Rabbit. What for? Perhaps it would be better to help with sanctions, as Washington does in such cases? Moreover, Kiev is “in meaningless malice,” according to one of the leaders of the DPR, Purgin, who has just established an economic blockade of Donbass. This is not even sanctions, but genocide.

Speaking of sanctions. At the G-20 summit in Australia, Obama again distinguished himself for his ebolic rudeness. Washington continues to demand that Russia abandon the defense of the Russian-speaking population in Ukraine, and supported the American anti-Russian policy of creating a Bandera fascist state on its borders. Putin, in response, hinted that the Americans are not okay with their heads: the connection between the eyes and the brain has been lost. And he left the summit somewhat earlier: he ignored the dinner party. This, of course, is a demarche and response slap in the face of the Australian summit, and the answer to the American sanctions blackmail.

Washington’s clouding of reason makes us look at the appearance of our fleet off the coast of Australia: he took a position along the route No. 1 of Russia with President Putin, that is, he actually blocked the sea and air space on the way of the presidential plane returning to its homeland. Perhaps our intelligence agencies have reason to suspect Washington of an impending assassination attempt on Putin. The US has a very bad credit история"In this regard: they killed a lot of foreign presidents, and they attempted in general without countless. One CIA fighter against Fidel Castro is worth something! The Malaysian Boeing, shot down by Banderovites, also, there is a version, was mistaken for the Russian board No. 1 ...

The US satellites at the summit were very cautious about Russia, Washington didn’t like their behavior for a long time, and he bought two overseas Anglo-Saxon shepherd dogs at a similar price — Canada and Australia — and set them the task of poisoning Russia. They are beyond the oceans, with Russia are almost not connected, and go in barking to a frenzy. Prove loyalty to his black master, in the literal and figurative sense. But Russia is far away from them, barking in vain, as was shown by the early departure of the Russian president from the Australian summit.

... Its main result somehow did not find reflection in the world media: the BRICS countries agreed to create an International Bank, similar to the IMF. Next July, at the BRICS summit in Ufa, it is possible that it will be presented. And the IMF, we say: "Come on, bye!"

Welcome to the world without the West!