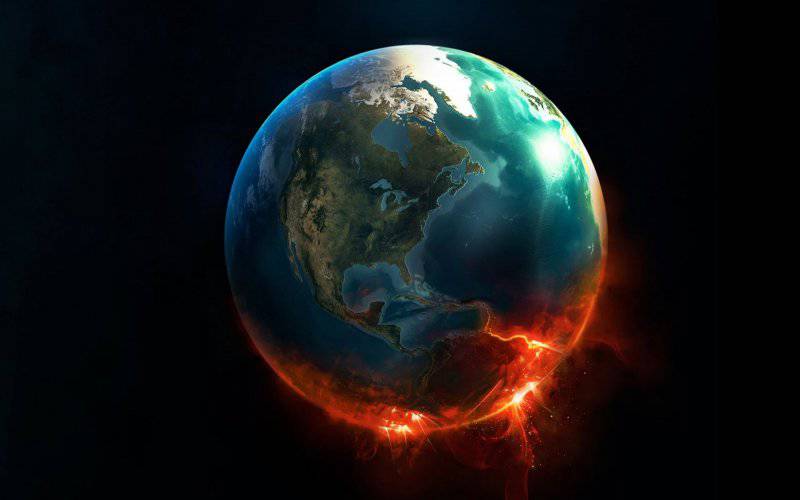 The extremely tough position of the West on Russia, of course, has several dimensions. Reducing it to any one factor is completely unpromising. The position on the new course, declared in 2007 in Putin's Munich speech, posed the problem of confrontation in all possible directions, but it seems that it was precisely the tough response of the West, if it was envisaged, then in an extremely herbivorous scenario. In 2007, at the peak of oil prices with an ever-increasing trend, this could possibly be somehow explained, but already in 2008 a crisis began, which immediately led to completely different scenarios of confrontation.

For the United States, with its abandonment of the strategy of world domination and its replacement with a strategy of world leadership, the question of survival has become the fragmentation of as many countries as possible. If you cannot be strong, you must make everyone else weaker. This is the rationale behind this strategy. The fragmentation of the existing boundaries had to be put on stream.

In fact, the Arab Spring became a creative rethinking of all previous experiments in dismantling different countries - the USSR, Yugoslavia. However, if almost always the fragmentation went along the administrative boundaries and at least somehow, but succumbed to the influence of existing rules and norms of international law, then the precedent of Kosovo, when the collapse of the country went deeper, became very promising from the point of view of US interests. That is why they so fiercely and in spite of everything pushed through the decision to recognize Kosovo - they really needed both a precedent and experience.

Actually, therefore, any processes that, one way or another, but lead to the collapse of existing countries, are in the interests of the United States. The disintegration of Georgia and its formalization through the creation of unrecognized South Ossetia and Abkhazia suited the United States quite well - another country was falling apart, and at the same time an irreparable hotbed of tension arose on the borders of Russia. Most likely, that is why Russia was "released" in 2008 - firstly, the United States did not have the opportunity to somehow obstruct Russia's actions, since its capable army was busy with the war in Iraq and Afghanistan. Second, the disintegration of Georgia was fully in line with the new US strategy. If there is no difference - why pay more?

The Arab Spring, which is still continuing as aftershocks on the surface of the region, has already produced more than satisfactory results for the United States. Libya has already de facto disintegrated, Yemen is in a state microscopically little different from disintegration. Syria will most likely never be able to reclaim its eastern and possibly northern provinces. Iraq, already degraded after the occupation, has already split into three territories, each of which, by the way, also has its own tendencies towards further fragmentation. Next in line is Afghanistan, in which, after the withdrawal of the NATO contingent, the war between the Taliban and the Kabul authorities will again flare up, which is very likely to again lead to the isolation of the Uzbek and Tajik enclaves. The spread of this process to the north will metastasize in Kyrgyzstan and Uzbekistan. In Turkmenistan, the power of the new president is much weaker than the previous one, and already now there are unpleasant signals from there from the regions bordering with Afghanistan.

Within the framework of such a strategy, the United States would be completely satisfied with the disintegration of Ukraine, especially since this process after the coup d'etat acquired its own internal logic. Russia's involvement in this process gave it a different dynamic, but in no way changed its vector. If Crimea were to become another unrecognized territory, everything would be all right for the US plans. The fragmentation of the world space continues. But then something happened that completely got out of the existing trend. The annexation of Crimea to Russia.

Instead of the process of disintegration, the opposite went - the process of collecting territories. A precedent quite comparable to the Kosovo one - only with the opposite sign. And here it was not just the tactical and local defeat of the United States that was at stake - they would have come to terms with this, just as they would have come to terms with the counter-coup in Egypt. Here the question was put bluntly. Or we, or they. The Crimean precedent had immediate consequences in Donbass - and here everything had to be done to prevent him from being cloned. It is difficult to say what arguments were found for the Russian leadership, but the rapid takeoff in Crimea ended in May with all four feet braking.

The United States will be quite satisfied with the existence of another Transnistria on the border with Russia - and here Kiev has nothing to catch. As long as there is a possibility, he will be twisted his arms in the States and Europe, not allowing him to finally finish off the rapidly degrading territories. But no one will allow Russia to repeat the Crimean precedent - in any case, there is so much at stake that the pressure on us will be completely unprecedented. No one is allowed to stand in opposition to American plans.

The Kremlin, it seems, realized late that it was he who managed to break it, but now it cannot win back with Crimea. Which provides the West with a great opportunity to eventually pit us against Ukraine. However, we will simply not be allowed to join Donbass or demonstrate readiness to join. Up to the threat of war. The fact that in May it was possible to knock down Russia's offensive impulse sharply under the breath gives the West quite serious confidence that its threats look quite weighty.

The Kremlin tried to play counterplay - to give back Donetsk and Lugansk under the guise of our desire for a single, indivisible Ukraine. The Minsk agreements were the first step in this direction. They are considered as a betrayal of Novorossiya, but in fact it took place already in May, so the train has already left. However, Poroshenko's decision to completely cut off any economic activity in territories beyond his control closes Moscow's ability to slowly and gradually roll back in Donbas. The surrender and withdrawal of willful commanders, the transfer of power into the hands of completely controlled local politicians, the introduction of vacationers whose main task is to maintain loyal militant groups rather than fighting punishers - all of this suddenly becomes meaningless.

It is necessary to make a decision right now - to take the territories for its maintenance and finally enter into a clinch with the West or hand them over to the mercy of the winner. At the same time, there is no doubt that even if Kiev regains formal control over these territories, they will become the second Ukrainian Zone, in which life will no longer exist. In it, arrests and executions alone will take several years, and relapses of uprisings will be inevitable for a good decade. So the main task of the United States - the creation of a flaming border of Russia - will be carried out this way and that.

In fact, Poroshenko made a decision that is unprofitable for himself. If, of course, he is considered a Ukrainian politician. But he is an ordinary comprador and colony administrator. Therefore, he made a decision that was dictated to him by the US Embassy. Putin's ultra-cold reception at the GXNUMX summit should show him that it is now his turn to listen to instructions and do the right thing. Obama even threw a "carrot", saying that Russia's withdrawal from Novorossiya would lead to an immediate lifting of sanctions.

It is clear that such a lure from Obama is the Russian nomenclature. For her to push through the presidential door, persuading and threatening Putin to obey. It is clear that Obama will not fulfill his promise even in the event of Putin's complete surrender, clinging to something insignificant. Again - solely as pressure on the Russian compradors, explaining to them - it's all Putin's fault, here's him. It would be a sin to miss such an opportunity, here you can understand Obama.

In fact, the question now arose before the Russian authorities - to continue to bend or to rest against the wall, to which we were almost pressed. And no one will give an answer to this question, except for her. It is absolutely pointless to assume, predict or guess here.