Expert: Yanukovych relieves the Ukrainian army from the "Soviet loafers" 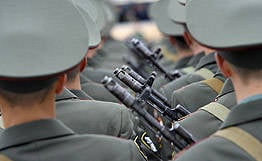 "The reduction of the Ukrainian army, proposed by President Viktor Yanukovych, is deliverance from excess cargo, which, in particular, arose from the fact that hopes for military cooperation with Russia were not fulfilled," Ukrainian political analyst Nikolay said in an interview with REGNUM 17 in August Mikhalchenko.


"The reduction of the Ukrainian army by five to ten thousand troops, in principle, does not solve anything. This is a reduction of those units that are not involved in combat crews or mobile units. These are, in the majority, residual bases that are still not closed, although It’s long time ago - as in Mukachevo, or they are in the process of closing, ”noted Mikhalchenko, in particular. "Thus, these cuts will not affect either the combat capability of the Ukrainian army, nor its logistical support. This is the reduction of inactive military structures. There are a number of military units that are in liquidation. Some of them were created in expectation of cooperation with the army Russia, the CIS countries. But in practice these calculations were not justified, "the political scientist continued his thought. “It is also possible that they will reduce the number of oversliders, since there are quite a few loafers in the Ukrainian army who are not modern military men. They are still remnants of the Soviet army. Thus, this is a purely auxiliary contraction,” the political scientist said.

Ctrl Enter
Noticed oshЫbku Highlight text and press. Ctrl + Enter
We are
Reports from the militia of New Russia for 26 August 2014 of the year
15 comments
Information
Dear reader, to leave comments on the publication, you must to register.