November 17, 2014
36
The Hague Tribunal after 12 years of preliminary detention released the Serbian politician Vojislav Seselj. Exclusively from "philanthropy" - for health reasons. However, Seselj himself says that he is going to Serbia not to be treated at all, but to revenge. And thanks for his release Russia. 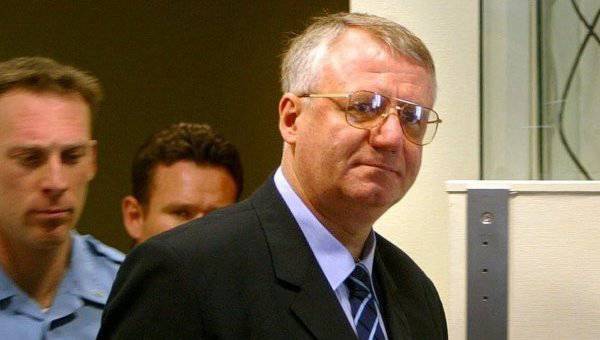 The merciless "humanism" of the West knows no bounds. Not long ago, the European Union lifted the sanctions against the last president of the former Yugoslavia Slobodan Milosevic. After 8 years after his strange death in the dungeons of the Hague Tribunal, he was given the right to move around Europe ... And now 60-year-old Serb Vojislav Seselj has been released from the same prison. Still alive. But also exclusively from "philanthropy" - for health reasons. And not at all, because the court had failed to prove his guilt even for the years of preliminary imprisonment, which even by the standards of this punitive institution 12 had taken.

During this time, however, he was sentenced three times, but each time only in minor matters: all for divulging the personalities of witnesses in books and publications. As for the "gentleman's recruitment" of elite defendants from the former Yugoslavia, the International Tribunal, actually, created for the massacre of the leaders of the Serbian resistance, could not get close to Sheselj. Incitement of ethnic hatred, genocide, torture, murder, deportation and other "bloodthirstiness" towards the Croats and Bosnians in the beginning of 90's - all the 14 points in his legal case remained just words. But they cripple. A few years ago, Šešelj in a cell suffered clinical death. Even then, his supporters in the radical party of Serbia decided that The Hague would return to the homeland of their leader in the same way as Milosevic. After that, oncology was also added to heart problems. But Seselj comes back home still not in the bag, although he feels himself a Count of Monte Cristo. Already made it clear: "Do not rush to bury us. We still have cases."

Seselj, who, in the times of his military youth, was also famous for sharp expressions of his enemies, and now has retained a battle primer. He says that he is going to Serbia not to be treated, but to revenge. Who, did not specify. Vojislav Sheshel from the same row as Slobodan Milosevic, Radovan Karadzic or Ratko Mladic. He also got into the "execution list" of the International Tribunal, as it is called in Serbia, for patriotism. However, in his prison stories everything was unique. Starting with the fact that he opened it voluntarily: the 2003 surrendered to The Hague in February, when the tribunal made the accusations public, one might say, on top of its glory. The worst days for his country were already behind, the best ones for him were just beginning. His radical party was a member of parliament, he himself, having already been vice-president, was thinking about promotion. He was at the peak of popularity and considered cowardice to hide. He went to court, as he said, so that he would not leave a stone unturned.

The process started only in November 2007. And then after the announcement of their hunger strike. The hearing ended in the 2010 year. But Seselj continued to keep locked up, in fact, simply because he is. And only a week ago, the tribunal decided to release him. According to the principle: send it while it is alive. Another death in prison without a sentence would have been overkill. He was condescendingly let go of dying. Although he may assume that all the same, as planned then, in 2003, he returns home as a winner.

After being released from prison of the Hague Tribunal, Vojislav Seselj expressed his gratitude to Russia in an exclusive interview with the correspondent of the Serbian editorial office of the Voice of Russia website.

“I am grateful to the Russian government for saving my life during the hunger strike that lasted 28 days. In The Hague, it seemed they had already agreed that I would die. But then the Russian Foreign Ministry made a rather tough statement, after which the Hague Tribunal immediately made concessions and accepted all six of my conditions for ending the hunger strike, ”said the Chairman of the Serbian Radical Party (PSA) Sheshel.

Russia got to its feet, according to Seselj, precisely with the coming to power of Putin. And Serbia’s efforts to get closer to Russia, which the country began to show even during the Yeltsin period, have intensified many times over. “Our only chance is a rapprochement with Russia. We want integration with Russia, as well as Belarus and Kazakhstan. We can save only integration with Russia. As always in history, Russia saved us in the most difficult situations, ”said the temporarily released.

Despite being in The Hague, Šešelj is well acquainted with the situation in Ukraine. “Now the pro-Nazi junta created by the West is in power in Kiev. PSA supports Donetsk and Lugansk. We want the whole of Ukraine to return its soul, return to the Slavic path, refuse from Euro-Atlantic integration, which will bring only death to both Ukrainians and Russians living in Ukraine, ”Seselj told journalists.

In The Hague, they can probably decide that they still completely cope with the task of punishing the leaders of the former Yugoslavia: Milosevic was taken to the grave, and Seselj was returned disabled.

By the way, the main condition for his release, the tribunal called his return to court for sentencing, the date of which is not determined.
Hoping, apparently, that, as in the case of Milosevic, it is not necessary to define it.

The professor is not going to return voluntarily to The Hague to hear the verdict: “For this, President Tomislav Nikolic and Prime Minister Alexander Vucic will have to detain me and extradite me”.