A weighty argument is the aircraft carrier of discord 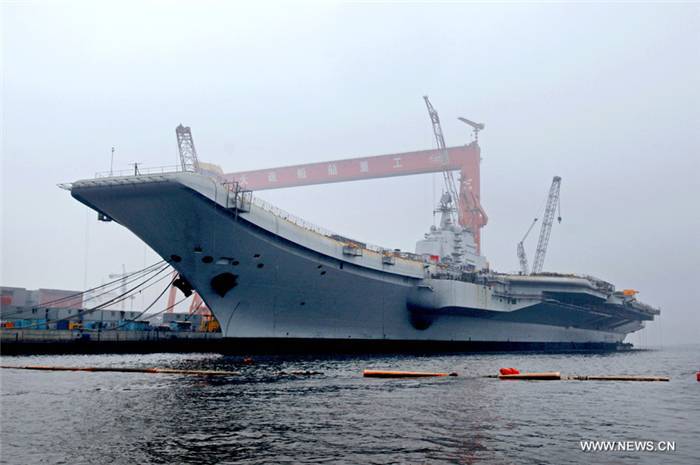 There are states mainly oriented to the sea, say, Norway, Britain, Holland. There are continental, such as, Russia, Germany, France. Exceptional states include, for example, the United States and Canada, which combine both principles. And the point here is not the length of the maritime frontier, the number of military and civilian ships, the potential of shipbuilding in general or the qualifications of seafarers, but in the subtle factor of state psychology. For example, island Japan has never been generally accepted maritime power. What in this case to talk about China, which had no ocean ambitions at all. Now, however, the Celestial Empire draws its own naval vector.

In previous decades, the US Navy was virtually unchallenged in the Pacific, including publicly declaring the South China Sea with its fisheries, rich shelf and trade routes passing through it as the “zone of its own state interests”. Several years ago, the government of China, in turn, declared its sovereignty over the waters of the adjacent Yellow, East China and South China seas. The Association of Southeast Asian Nations (ASEAN) also has interests in this region.

In the 2009 year, speaking at the Aseanovo Territorial Forum in Hanoi, US Secretary of State Hillary Clinton voiced a new policy that actually meant: in that case, you have controversial issues with China, call us. Since then, the differences between China, on the one hand, and the United States and ASEAN countries, on the other, have begun to take on a sharp shape. The military ships of the Celestial Empire repeatedly hampered the work of the Vietnamese and Philippine vessels by conducting their own geological surveys near the disputed islands. There have been extremely serious cases like stories with a US reconnaissance ship collecting information about the Chinese Navy in the South China Sea, which was cordoned off and taken into the ring by Chinese military ships. According to the statements of the Chinese side, “the invasion of the American aircraft and ships into the economic zone of China lasts to the present day”. At the same time, American experts have expressed concern that China may well develop plans to deploy its own 094 (Jin) planes on the Hainan Peninsula, equipped with JL-2 ballistic intercontinental missiles, and begin continuous patrols of its own Navy waters in the South China seas.

But now China has another argument to strengthen its own position in the region. We are talking about the aircraft carrier "Shi Lian", built on the basis of the Soviet cruiser "Varyag" purchased from Ukraine for 20 million dollars. A trial exit to the sea was made 10 August 2011 of the year. The performance tests were carried out for 4 days and already on August 14, the aircraft-carrying cruiser returned to the port of Dalian. In connection with these tests in the period from 10 to 14 in August 2011, navigation in the coastal waters of the PRC was restricted, reports Xinhua news agency referring to the information provided by the Shipping Safety Administration. On the shore, the crew, headed by a graduate of the Naval Academy. Admiral Kuznetsov of the city of St. Petersburg, Captain Li Xiaoyang, was greeted with fireworks. The task of the short sea debut was the detection of admitted deficiencies in the design of the aircraft carrier. Now the port will continue work on the subsequent improvement and equipment.

With the completion of work onboard Shi Lien, J-15 carrier-based fighters, Chinese Z-8 and Z-9 helicopters and Russian Ka-31 will be deployed. And then the Eastern verbal patterns begin again: according to the official version, the first aircraft carrier will be used by the PLA "as a training ground", "for various research, mostly civilian," etc. But a quite reasonable question arises, if this is just a testing ground, then why are computerized fire control and monitoring systems installed on it, a modernized Type 730 artillery system, a shipboard anti-aircraft missile system FL-3000N, which is capable of destroying air targets at a distance of 9 km?

Representatives of the United States, expressed concern about the fact of the emergence in service of the Chinese army so formidable weaponswhich, undoubtedly, is the modern aircraft carrier, but, nevertheless, the statements indicate that the appearance of an aircraft carrier in China will not significantly change the ratio of the naval forces currently present in the South China Sea. The PLA Command stated that the aircraft carrier would be used for training purposes, as well as “running in” of special technologies for the design of the following similar ships. Despite this statement, the nearest neighbors of China with whom he has unresolved territorial disputes in launching an aircraft carrier see an objective threat to their national interests. The United States and India called the fact that a modern combat unit appeared in the Chinese Navy as a declaration of intent. Undoubtedly, Beijing thinks in the near future. He develops naval dominance tactics eastward literally 30 years ahead. According to Japanese military experts, already in 2015, China, with a high degree of probability, will have 3-me aircraft carriers, which will include ships with nuclear power plants.

Another question is where China is going to use these ships. The water area of ​​the nearest South China Sea is very small to accommodate 3-x aircraft carrier connections. China has disagreements with Japan over the uninhabited Diaoyutai or Senkaku islands; in September 2010, the detention of a Chinese trawler in the area by Japanese coast guard boats caused a rather loud diplomatic scandal. This archipelago belongs to a chain of islands in the Pacific Ocean, which is located on the continental shelf, whose richest reserves of raw materials are also the subject of an unresolved dispute.

We are in Yandex Zen
The state and prospects of development of the naval forces of Ukraine (2013)
Preliminary evaluation of the prototype of the unobtrusive Chinese fighter Chengdu J-XX [J-20]
10 comments
Information
Dear reader, to leave comments on the publication, you must to register.