Orders and medals of the Russian Empire. Order of St. Stanislav

November 20, 2014
4
The Imperial and Tsarist Order of St. Stanislav is a state award of the Russian Empire, which existed from 1831 to 1917 years. This order was the youngest in terms of seniority among all state orders, mostly they were awarded to officials. Like the Order of the White Eagle, this award came to the Russian award system from Poland after its part became part of the empire in 1815.

The Order was established 7 in May 1765 of the year, its founder was the King of Poland Stanislav-Augustus Poniatowski. The award was established in honor of St. Stanislaus Bishop of Krakow (11 century), who was the patron saint of Poland. Beginning in 1815, when the Kingdom of Poland was annexed to the Russian Empire, Russian Emperor Alexander I awarded this order to his Polish subjects. At the same time, according to the statute of 1815 of the year, this award was divided into 4 degrees (from the 1839 of the year the order has only 3 degrees left).

In the 1831 year, after the Polish uprising of 1830-1831 was crushed, this order along with other Polish orders entered the Chapter of the Orders of the Russian Empire. It happened during the reign of Emperor Nicholas I. In this case, the appearance of the award has undergone some changes. The image of St. Stanislav was replaced by a monogram of his name. 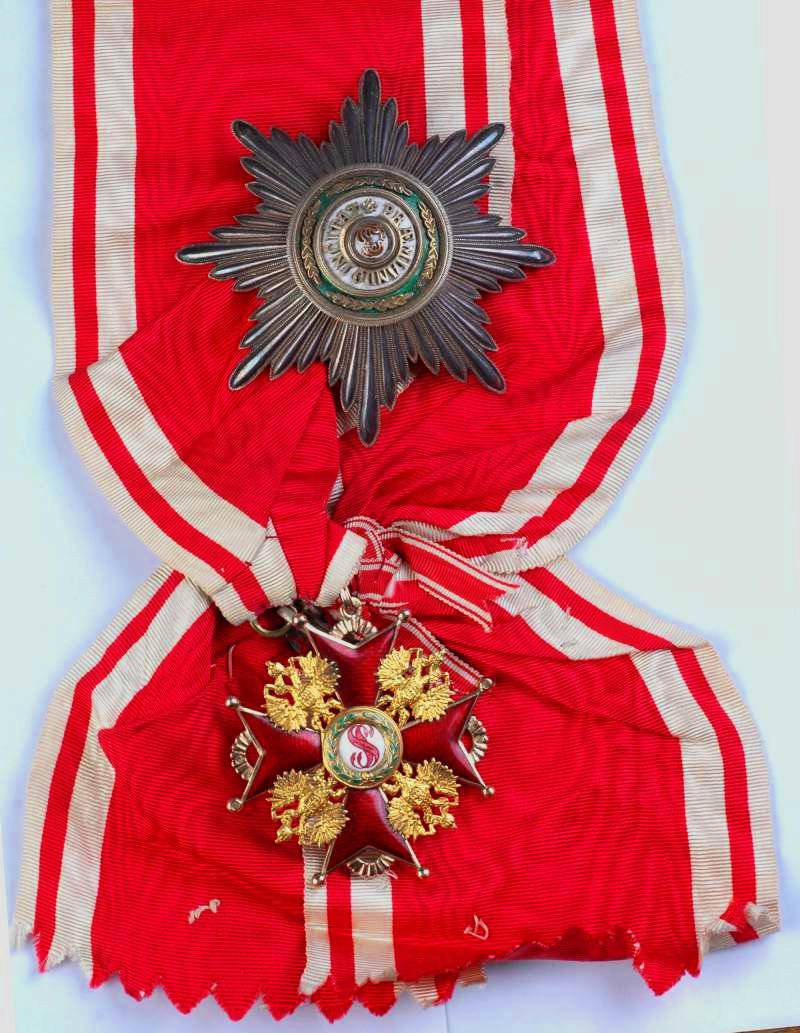 Order of St. Stanislav I degree

At the same time, this order could complain both for the civil service and for military exploits. It was also envisaged that this award may be issued for the implementation of charitable activities. Also, the Order was issued for useful discoveries in the sciences, agriculture, crafts and arts, for the establishment of useful and significant manufactories. Also, he could have been issued as an essay and publication of a work that was recognized as generally useful. Among all Russian orders, this award occupied the last step of the hierarchy, in order of precedence it stood behind the Order of St. Anne.

This order could receive almost all civil servants, who served the prescribed time, as well as having ranks of both military and state. When it was established, an order of any degree was given to its owner by hereditary nobility, but rather quickly there was discontent among the nobility by the fact that their number grew very quickly at the expense of small servants and merchants. For this reason, in 1845, the issuance of orders of the 2 and 3 degrees was temporarily suspended. Awards were renewed only on 28 June 1855 of the year. However, from this point on, the right of hereditary nobility was granted only by the Order of St. Stanislav of the 1 degree. 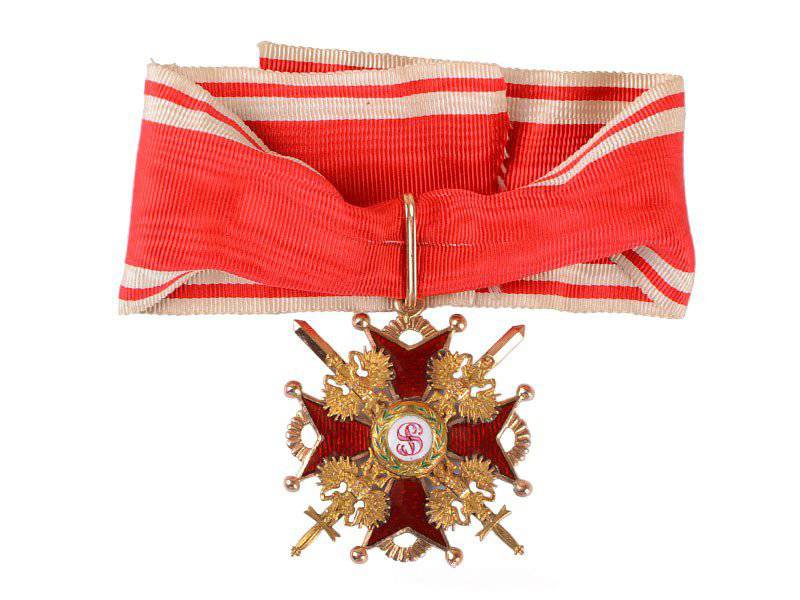 It is curious to note that since 1844, on the signs of the order, which were issued to persons of non-Christian religion, the picture of the monogram of St. Stanislav began to be replaced by the black imperial Russian eagle. In addition, starting from the year 1855, they began to attach two crosswise swords to the order marks issued for military distinctions. In the case of rewarding a person with the same order, but already of a higher degree for non-military services, swords were located in the upper part of the cross, as well as stars of the order.

The motto of the order was the phrase "Awards, encourages." The Order of the holiday was celebrated on April 25 / 8 in May in a new style. The Order consisted of the following signs: a golden cross, an eight-pointed star and a red ribbon with white stripes on the edges. The orders were worn as follows:
Grade I - this is a cross on a ribbon 11 cm wide, the ribbon was worn over the right shoulder, the star of the order was located on the left side of the chest.
II degree of the order - the cross is worn on the neck, on a special tape with a width of 4,5, see
III degree of the Order - the cross is worn on the chest on the tape, the width of which is 2,6 cm.

The Order of Svyatoslav looked like this. I degree of the Order is a gold four-pointed cross with expanding forked ends, as well as golden balls on them. The bifurcated ends of the cross were connected to each other with the help of golden bows. In the corners of the cross were two-headed eagles of gold. The cross on the front side was covered with red enamel. In the center of this cross, in a special medallion, on a white background was located the monogram of St. Stanislav: the letter SS. On the reverse side of the medallion there was exactly the same monogram. A laurel wreath was placed around the medallion on a green field. The Order of the Cross was worn on a red ribbon with a double white border. 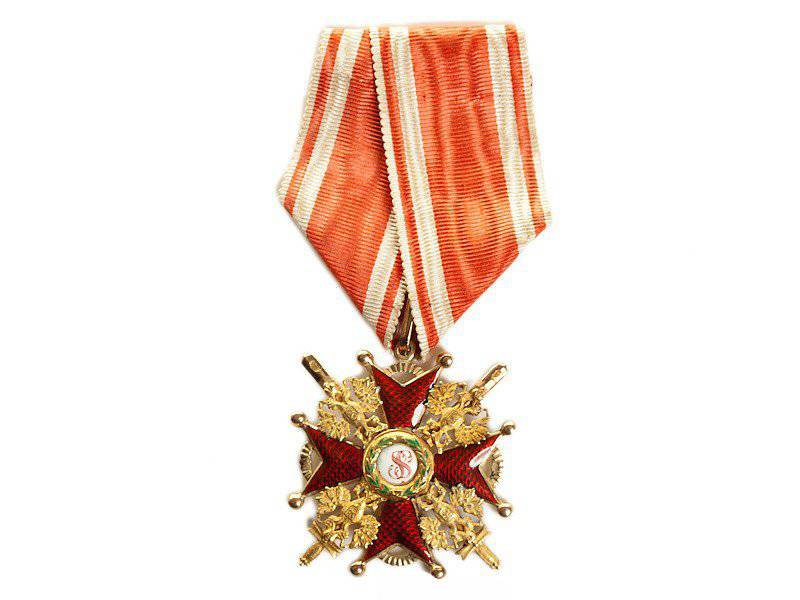 The star of the order was made of silver, was eight-pointed. The star was worn on the left side of the chest. In the central medallion on a green field (in the shields of a star on a field of white color) was placed the monogram of St. Stanislav: SS. At the same time around the medallion, on the white field (in the shields of the star - on the green field) was placed the order's motto in Latin "PRAEMIANDO INCITAT". Around this motto on the green field were located 4 golden laurel branches.