The Korean Peninsula is again "shaken"

August 19 2011
4
The Korean Peninsula is once again “swaying” - on August 10, the DPRK and South Korea launched a series of artillery rounds in the area of ​​the already famous Enphendo island in the Yellow Sea. Although there are no victims and victims among the civilian population and the military, this event again provoked panic among the local population. In addition, in South Korea began the regular joint with the US military maneuvers "Defender of Freedom". They, among other tasks, will work out the operation to destroy the nuclear weapons North Koreans. Pyongyang responded with a characteristic reaction - saying that the Korean Peninsula after 1953 had never been so close to a new war as it is now.


The military maneuvers of South Korea and the United States will last until August 26 and are distinguished by their scale: 56 thousands of South Korean and 30 thousands of American military personnel take part in them. The US forces already in South Korea will be reinforced with units from the US and from the garrisons in the Asia-Pacific region, in addition there will be observers from 7 countries.

According to Washington and Seoul, the exercises are purely defensive in nature: “The maneuvers are defensive in nature and are designed to increase combat readiness and enhance the interaction of the armies of South Korea and the United States,” the American side said. And the South Korean military added that such exercises would help them better prepare for the transfer of the operational command of their troops in wartime to the South Koreans planned for 2015 year. Pyongyang was informed about the nature of the teachings in advance.

But the North Korean authorities do not really trust these statements, as the DPRK's main newspaper Nodon Sinmun reported that: "Joint military maneuvers against Pyongyang will further aggravate the already tense situation on the peninsula." In principle, it is difficult to disagree, it seems that North Korea is provoking new shares. The North Korean News Agency TsTAK reported: “The Korean Peninsula is facing the worst crisis in its stories. Total war can erupt on the most insignificant reason. ” And this is against the background of the fact that before these exercises the representatives of Pyongyang discussed with the American delegation the possibility of resuming negotiations on the fate of the North Korean nuclear program. At the same time, Pyongyang called for the current military exercises to be canceled in order to “demonstrate the intention to achieve denuclearization (that is, the creation of a nuclear-free zone) of the entire Korean Peninsula.” Judging by the military exercises that began, the United States and South Korea ignored this “signal”. 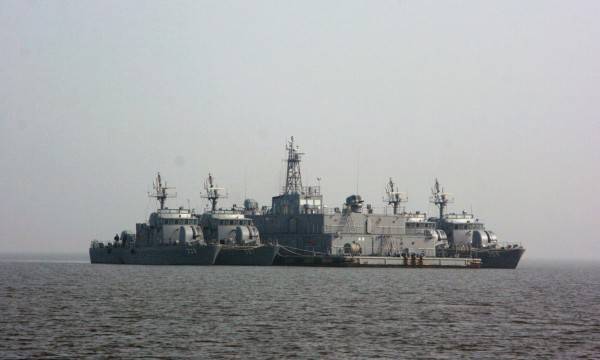 Floating dock with military boats at the exit of their bay Taenphendo Island. These four boats are a reserve, which, if necessary, should provide support to the ships on duty.

This incident occurred at approximately 1:00 pm local time on 1. According to a representative of the South Korean General Staff, the first sounds of artillery shots from North Korea were heard by the crews of military speed boats, they patrol the area so-called. Northern division line (srl). This dividing line is actually the border between South and North Korea to the sea.

Although there was no continuation after this, according to South Korean media reports, a real panic began among the local population. This event reminded them of relatively recent similar events, but more ambitious - in November 2010, the skeleton was also fired by North Korean artillery, as a result, about 20 people were killed or injured. When people heard the shots they thought that North Korea was shelling the island again, several hundred residents began to hide in specially built bomb shelters and stayed there for quite a long time. On another island - Pennendo, which is also located next to North Korea, the troops were put on full alert.

Representatives of the South Korean General Staff after the incident sounded two possible versions of this event: it is either the teachings of the North Korean forces, or "error".

11 August North Korean authorities denied reports of shelling in the SRL area and referred to demolition work for construction purposes. According to representatives of Pyongyang, the South Korean military in vain responded with artillery fire to the "usual subversive work," which the North Koreans carried out for construction purposes. In Seoul, they found these words a lie. In principle, this skirmish would not have much value. If not for the two major conflicts last year: the shelling of 2010 in November and the mysterious death of the South Korean corvette Cheonan in March 2010, they sharply aggravated the situation on the peninsula. According to some experts, the countries were close to a large-scale conflict.

The situation is complicated by the fact that the Korean Peninsula is a supermilitarized region of the planet. After last year’s events, the officers “on the ground” received additional powers, so there is the possibility that a conflict may occur without an order from Seoul or Pyongyang.

In addition, Pyongyang perfectly see what is happening in Libya and Syria. But at one time, Libya itself abandoned its nuclear program. Therefore, Pyongyang received yet another proof that the correct course was chosen - the creation of a security guarantee using nuclear weapons. But not to think that Pyongyang needs war, it will lead to a catastrophe, an inevitable political crisis, a possible change of elite, the current leadership does not need it. Therefore, North Korea wants to develop relations not only with China or Iran, they also need contacts with other states. To get additional opportunities for economic development, access to new resources, including technologies, markets for their natural resources. Consciously go on further aggravation and war North Korea will not, the aggravation is beneficial to the United States. In this regard, recall the story of the death of the South Korean corvette, the Americans are masters of such adventures. And having unleashed a war on the Korean Peninsula, you can still gain time to solve internal problems, distract the world community, put a “pig” to China, Russia. 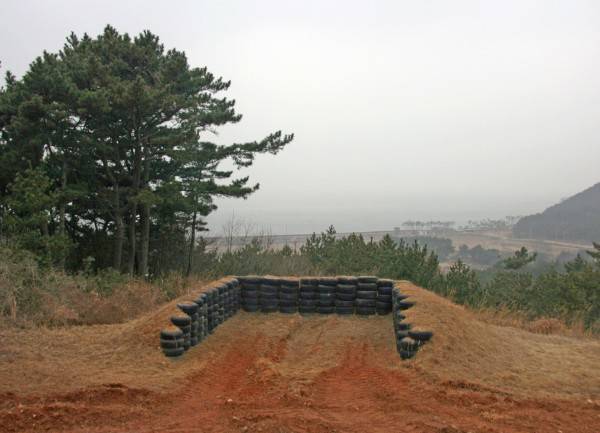 These are platforms where artillery is rolled out, if necessary, and Tanksto fire on enemy naval assault forces. At Enphendo such structures are very common. 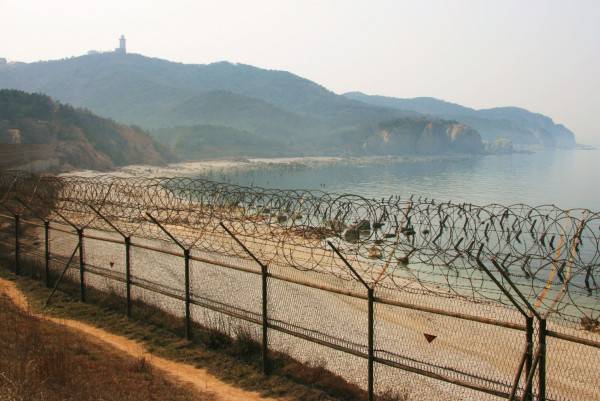 Such barriers block approaches to many beaches of the "five northern islands". First comes the fence with barbed wire. Then in the water along the beach line are installed two rows of stakes. Between them the barbed wire equipped with numerous sensors, hidden by the tide, is stretched. Thus, the Southerners cover the most dangerous in terms of the landing of the North Korean amphibious assault directions. 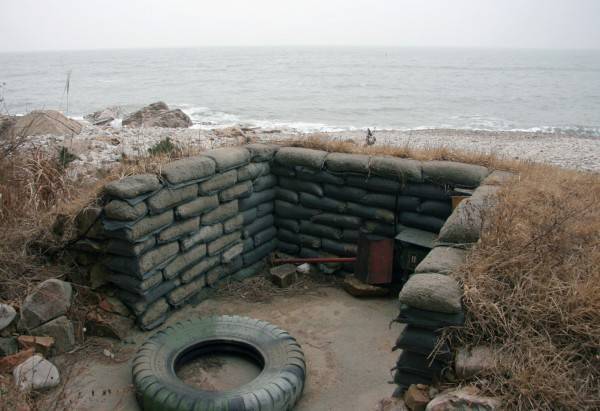 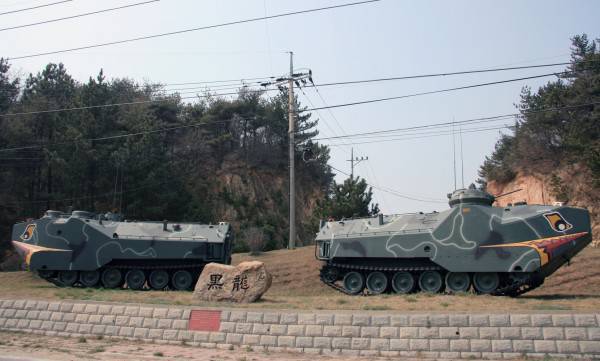 This monument states that the guard of Pannedo Island is carried by the Black Dragons Marine Division of South Korea. 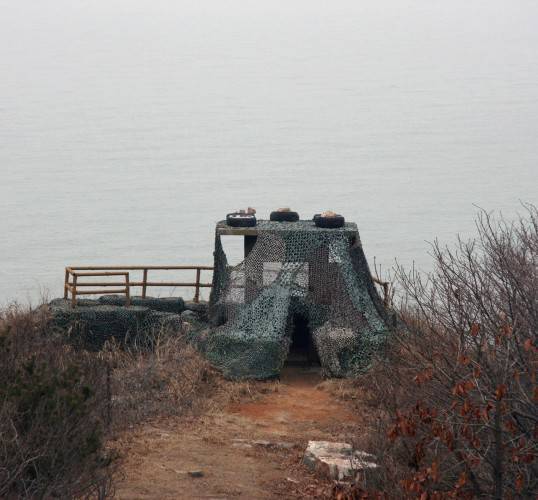 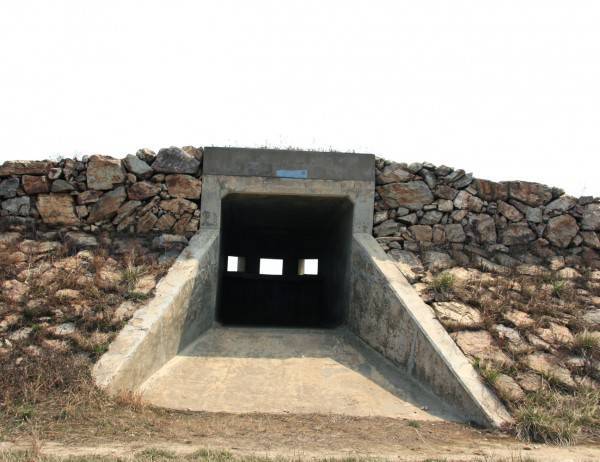 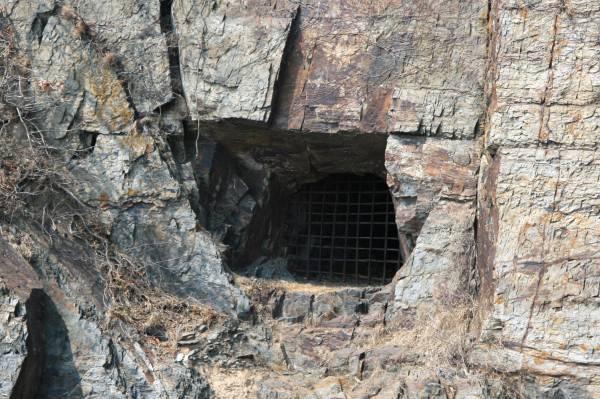 These are the mysterious "windows" and "doors", hacked right into the rocks, found in the mountains of the "five islands" quite often. It is said that many of the island’s cliffs are hollow, as they contain huge stocks of supplies and ammunition, which, in the event of a blockade of the island by the DPRK, will allow the garrison to hold out for at least two months. 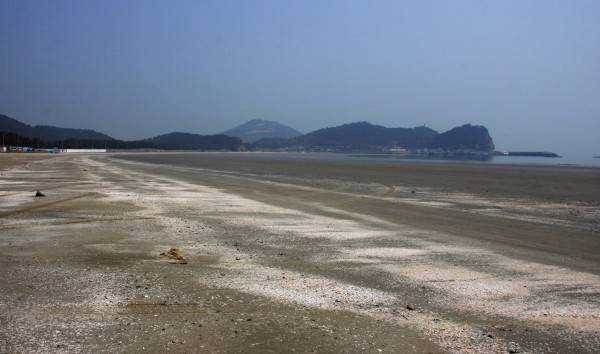 Beach airfield Sakot. The surface of the beach is very durable and smooth, previously used as a runway for aircraft. There are only two such places in the world in South Korea and Italy. 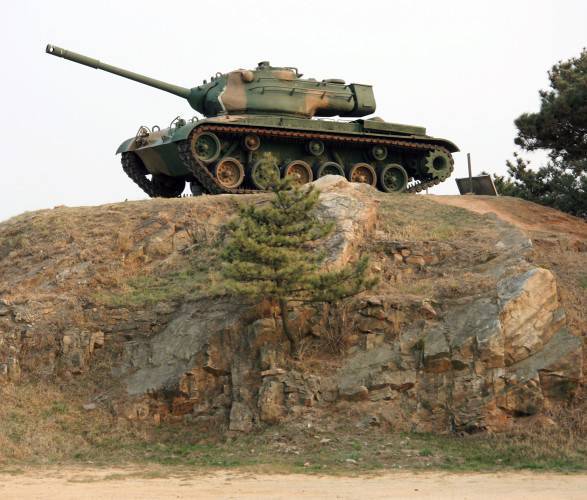 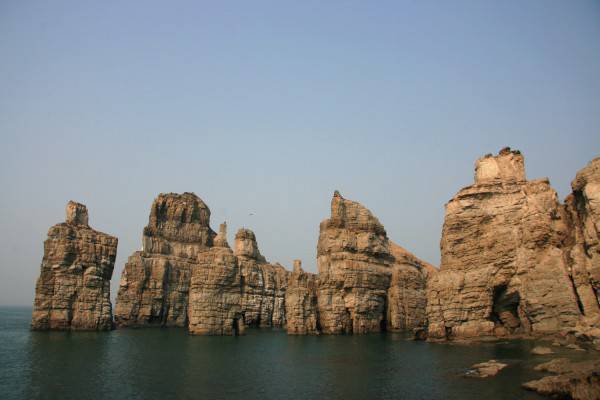 "The last masterpiece of a dying god" - rocks Tumuzhin. 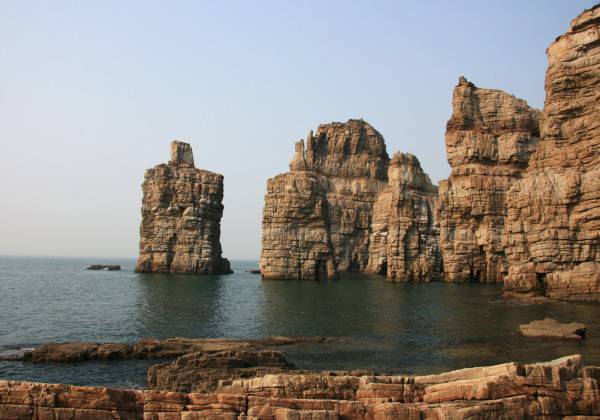 Ctrl Enter
Noticed oshЫbku Highlight text and press. Ctrl + Enter
We are
DPRK defense potential in Google Earth imagesKorean Peninsula: the forces of the parties. Part I
4 comments
Information
Dear reader, to leave comments on the publication, you must to register.