November 15, 2014
57
In the twentieth century, indemnities, which were the tribute received by the winners from the vanquished, were replaced by reparations — compensation for any damages. In recent years, the governments of some states that have appeared on the site of the former USSR have begun to demand from the Russian Federation “compensation” for staying their territories within the Soviet Union, considering that period “Soviet occupation”. So, in September 2014, Riga officially announced its claims to the Russian Federation in the amount of 300 billion euros. “Reparation” demands of this kind, being a political demarche, have, of course, neither economic nor legal grounds, but really a new kind of reparations, the question of which should be more resolutely placed on the international agenda, is compensation for damages from colonialism. 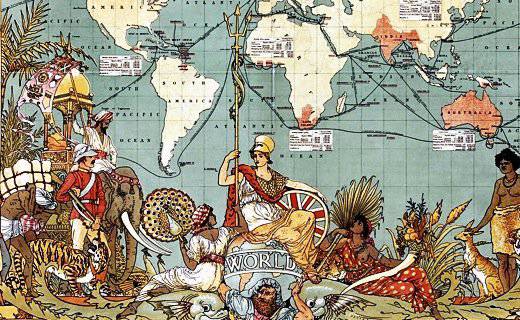 An important step towards recognizing reparations for colonialism in international law was the Declaration on the Establishment of a New International Economic Order, adopted at the UN General Assembly 1 in May 1974.

The document was adopted under pressure from the Soviet Union and the “77 group” (Non-Aligned Movement), despite opposition from Western countries. The declaration states: “All states, territories and peoples under foreign occupation, foreign and colonial domination or under the yoke of apartheid, have the right to compensation and full compensation for exploitation and depletion and for damage caused to the natural and all other resources of these states, territories and peoples. "

After the end of the Cold War, the formation of a new economic order began, but not at all that which the UN Declaration of 1 declared on May 1974 of the year.

The economic order that exists today (it is sometimes called “globalization”) actually reanimated many forms of neo-colonialism and colonialism.

Today the theme of reparations for colonialism comes to life again.

Africa bids the West for the slave trade 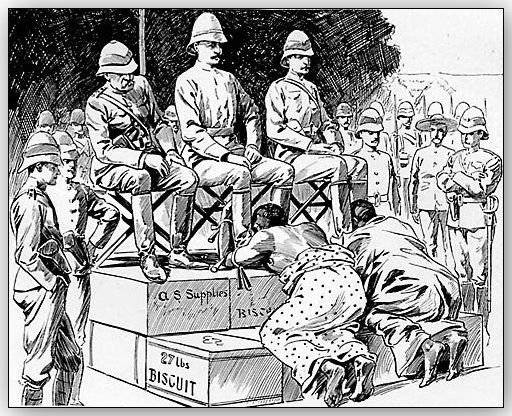 The All-African Conference on Reparations, held in Nigeria in 1993, launched the new round of the struggle of the developing countries for the reparation of damages caused by colonialism. Then the Jamaican lawyer Anthony Gifford proclaimed that the slavery of the peoples of the Black Continent was a crime against humanity. He stated that, under international law, victims of violence are entitled to reparation for those who have encroached on their lives and liberties. Even earlier, in 1991, the Organization of African Unity (OAU) decided to establish an African Reparations Commission (AKP). By 1999, the commission estimated that European countries and the United States caused damage to the Black Continent at 777 trillions of dollars. This took into account only the damage from the slave trade. Historians believe that from the 15th century to the 19th century, about 11-12 million Africans were exported by European slave traders across the Atlantic.

In addition to the slave trade, Africans in the colonies also suffered other losses - from forced labor, from lost profits due to the fact that the development of the national economy was blocked in the colonial territories. All these damages are not included in the amount of 777 trillion. Of course, the amount is unreal (it is approximately 20 times the global GDP at the beginning of 1990's), but the goal of the international commission that called it was to draw public attention to the topic of reparations for colonialism, and if necessary to prepare lawsuits of former colonies and semi-colonies to the International Court of Justice in The Hague and the courts of individual countries.

Private reparations for the consequences of apartheid in South Africa

The defendants in the lawsuits in such cases are not the state, but banks and companies. In the summer of 2002, well-known American lawyer Ed Fagan sued in Manhattan court for damages on behalf of a group of South Africans who were victims of the apartheid regime to the largest banks in Switzerland, UBS and Credit Suisse, in excess of $ 50 billion. Ed Fagan is known for being at the forefront of the preparation of claims of victims of Nazism. That operation ended with billions in damages to victims during the Second World War.

In 2002, human rights organizations in South Africa announced that claims on behalf of victims of apartheid would also be brought against German, French and British banking institutions. The initial lawsuits filed in 2002 and directed against a large number of firms were rejected, but in 2007, the US Court of Appeals decided to re-examine the appeals. In April, 2009, the district court in New York allowed the execution of trials for some lawsuits. The demands of the victims of the former apartheid regime were supported by South African President Jacob Zuma. His predecessor in this post, Thabo Mbeki, took a more restrained position and distanced himself from the plaintiffs, citing the fact that this problem may adversely affect the international relations of South Africa.

9 On April 2009, the federal judge in New York issued the following decision on the suit of the human rights organization “Culumani”: “Culumani” has the right to file claims to the American court for receiving compensation from those international companies that clearly helped the then South African government in repressing the black majority i.e. participated in the violation of human rights in the Black Continent. As a result, lawsuits were filed against which such giants of international business as General Motors, IBC, Ford, Barclays, British Petroleum, and Shell are listed as defendants. According to the lawyer of the plaintiffs Michael Hausfeld, the charges were also brought against the German Rhinemetall and the Swiss Oerlikon manufacturers. weapons, Japanese computer firm "Fujitsu". In all, in South Africa, millions of blacks seek reparations from Western firms for apartheid worth several billion dollars. More than five years have passed since the consent of the US federal court to file claims from the victims of apartheid, but so far none of the South African claimants has received any compensation. 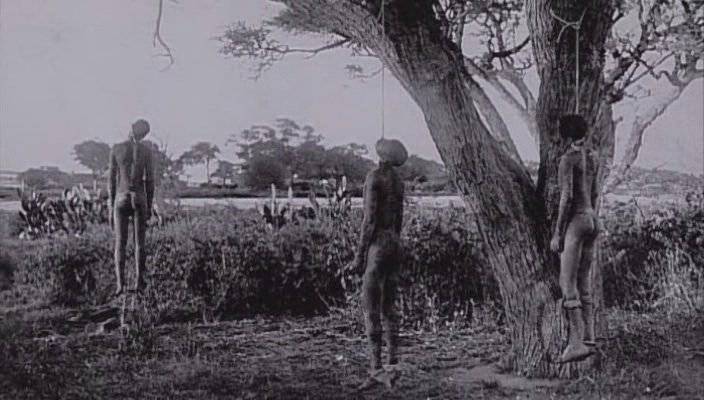 Since 2001, in one of the American courts there has been a claim of the Herero Namibian people against Germany in the amount of 4 billion dollars demanding compensation for damages from the genocide. During the colonial expansion of Germany at the turn of the nineteenth and twentieth centuries, German troops almost completely destroyed the people of Herero, seeking to seize his lands. High Chief Herero Quaima Riruaco stated: “We want reparations for the blood we shed and the land and cattle taken from us. I urge the German people and the church to put pressure on the German government to pay us reparations. ” 13 years have passed since then. Namibian plaintiffs did not receive anything from Germany.

And for comparison: the same Germany for decades regularly pays reparations to victims of the Holocaust, and without any court decisions, voluntarily. Several community organizations are engaged in making claims for compensation for the Holocaust, the most famous of which is the Association of Jewish Material Claims against Germany. Since 1951, the Association has received from the government of Germany 70 billion dollars. In 2014, the amount of payments through this organization’s channels (according to its own data) will be 185 million dollars, in 2015-m - 266 million, in 2016-m - 273 million, in 2017-m - 280 million.

Among the lawsuits for damages from colonialism, we highlight a special case of veterans of the anti-colonial uprising "Mau Mau" 1950-60-s in Kenya. Then the British military and intelligence agents, acting on orders from London, killed, maimed, imprisoned and tortured over 200 thousand people.

The lawsuit was sent to the London court in 2007 year. Kenyans demanded 59,75 compensation in the pound sterling from the British government for the atrocities committed by British forces during the suppression of the uprising. The veterans of the liberation movement were determined, stating that if they were turned down in London, they would appeal to the International Court of Justice in The Hague. The interests of the plaintiffs were defended in a London court by the British law firm Leigh Day. In June 2013 of the year, it managed to make payments to Kenyan 19,9 million pounds sterling (23,04 million euros). Although this is only one-third of the amount claimed, the decision of the London court can be considered as a victory.

This is a precedent that caused panic in the West, and inspired developing countries to continue the struggle for the payment of colonial reparations.