The fate of the heroes of the Winter War 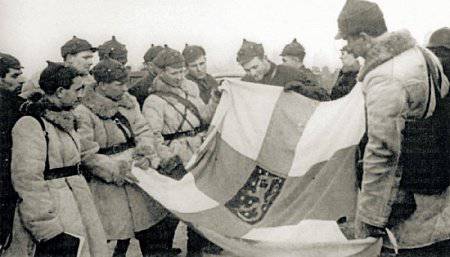 30 November this year marks 75 years since the beginning of the 1939 – 1940 Soviet-Finnish War. In the course of it, the title of Hero of the Soviet Union was awarded to 416 people. The Great Patriotic War, which began a year after the end of the conflict with Finland, did not allow the country to widely recognize the heroes of this short but bloody confrontation. Those of them who did not die the death of the brave on the Karelian Isthmus, very soon entered into a fight with the German fascist invaders. And not everyone survived to Victory.

Fortunately, before 22 June 1941, a small part of the stories about the heroes of the Soviet-Finnish war still managed to see the light. 22 April, two months before the start of the big war, the book “Fights in Finland” was published in the Military Publishing House of the People’s Commissariat of Defense. This edition contains the memories of the Red Army men and commanders, the stories of journalists about the recent battles. Having sustained two editions, the book “Fights in Finland” for a very long time remained practically the only narration about this war.

The book showed intense combat work, almost without exception, of the arms and services of the Red Army. The stories of the fighters and commanders have not yet carried in themselves that fierce hatred that will appear to the German fascist invaders during the years of holy war. Rereading the pages of this book, I often wondered how the life of these heroes was formed, what destinies their “raging” twentieth century rewarded. Today, the work of the military historians community is able to remove the veil of obscurity, making it accessible history the life of the heroes of the already distant war. The website “Heroes of the Country” provides ample opportunities for this, the materials of which were also used in the preparation of this article.

FROM THE ARROW TO THE PILOT

Of the 416 heroes, 97 soldiers were awarded the title Hero of the Soviet Union posthumously. There is a kind of "unknown" soldier among them. The shooter of the 15 Infantry Regiment Fyodor Ivanovich Ivanov was awarded the title of Hero of 7 April 1940. It is not known where he was born and how this hero looked from the most Russian of surnames. It is still not clear when and how he died while carrying out the “combat mission of the command”, and where a simple Russian soldier rested.

One of the most striking narratives of the book about the soldiers of those battles was the story of the tankman Ivan Sivolap. Driver mechanic tank The 155th separate tank battalion Ivan Danilovich Sivolap repeatedly distinguished himself in offensive battles in February 1940. Twice his tank was hit, and both times the brave tanker kept the car, continuing the battle. The young warrior was awarded the title Hero of the Soviet Union on April 7, 1940. Unfortunately, he had only a little more than a year to live. He will die the death of the brave on July 11, 1941.

During the battles in Finland, the chief was awarded the second Gold Star medal. aviation 7th Army Commander Sergei Prokofievich Denisov. He was the last of five twice Heroes of the Soviet Union, awarded this title before the start of World War II.

Commander-in-chief Yevgeny Savvich Ptukhin, commander of the Air Force of the North-Western Front, became one of the most notable military leaders who were noted for their high rank following the war. For the skillful organization of the actions of Soviet aviation, which caused serious damage to the enemy, 21 March 1940, he was awarded the title Hero. His fate was different with the beginning of the Great Patriotic War, which Lieutenant-General Aviation Ptukhin met as commander of the Air Force of the South-Western Front. 24 June 1941, after the most severe defeats of the first days of the war, he was recalled to Moscow and arrested there. 13 February 1942, by resolution of the Special Meeting of the USSR People's Commissar of Internal Affairs, Yevgeny Ptukhin was sentenced to death, and 23 February was shot.

In total, during the years of the Great Patriotic War, 112 Heroes of the Soviet Union - participants of the Soviet-Finnish war were killed on the battlefields. The first of these was Sergei Ivanovich Kosyakin. In the Soviet-Finnish campaign, Captain Kosyakin served as a squadron commander of the 44-th High-Speed ​​Bomber Regiment. After the conclusion of peace 12 March 1940, he continued to serve in the Baltic. Sergey Kosyakin died in an air battle over the Gulf of Finland 23 June 1941.

But there are biographies and destinies, from the touch of which heart is compressed in a special way.

The commander of the reconnaissance company of the 355 Infantry Regiment, Senior Lieutenant Alexei Mikhailovich Vatagin, was awarded the title Hero of the Soviet Union 21 in March 1940 of the year for successful reconnaissance conducted in January 12 in 1940. In 1942, he will finish his studies at the military academy, immediately after which he will take part in the battles of the Great Patriotic War. His last battle, the deputy commander for the combat part of the 238 Guards Rifle Regiment of the Guard, Major Alexei Vatagin, took 30 on April 1945 of the year on the outskirts of Prague.

The first Hero of the Soviet Union - a native of Tatarstan - 21 March, March 1940, was the younger political instructor Gafiyat Yarmukhametovich Nigmatullin. Already a senior political commander, Gafiyat Nigmatullin graduated from the Military-Political Academy in 1942. After going through the war, he will die on the last day of the Great Patriotic War - May 8, 1945, in Berlin.

The squadron commander of the 18 th speed bomber aviation regiment Captain Iosif V. Matrunchik during 105 days of the Soviet-Finnish war made 59 combat missions. 20 May 1940, he was awarded the title Hero of the Soviet Union. An active participant in World War II, Lieutenant Colonel Joseph Matrunchik died 9 on May 1945 of the year, being blown up by a mine.

Four people who were awarded the title Hero of the Soviet Union during the Soviet-Finnish war were subsequently deprived of this title and awards. One officer even before the start of World War II - for hooliganism and immoral behavior. One, having fallen into German captivity, went to serve in the army of Vlasov. In 1945, he was extradited by the Americans to the Soviet command, and convicted and executed in 1946. Another one was deprived of the title of Hero of the Soviet Union after the war.

But there was a unique case, which has already been told in print. The correspondent of the newspaper “Komsomolskaya Pravda” Valentin Petrovich Purgin (Golubenko) was awarded the title Hero of the Soviet Union 21 April 1940. Being a recidivist thief and swindler, Golubenko kidnapped a passport in the name of Purgin in 1937 after escaping from prison. Over time, he got a job in the Komsomol newspaper, Purgin was able to use fake documents to arrange for himself fictional business trips to battle sites in Khalkhin-Gol, in Western Belarus, on the Karelian Isthmus, to assign a number of state awards. Using the stolen forms of the special purpose 39 division, he prepared documents for assigning himself the title of Hero of the Soviet Union through the Naval Commissariat of the Navy in March 1940. This crime was solved because of the reckless arrogance of a swindler who published his portrait in the central press.

Purgin was arrested on May 23 of the year 1940 at the entrance to the Kremlin, where he followed to receive awards. He became the only person in the history of this exceptional award, who managed to fraudulently achieve the official award of the title of Hero of the Soviet Union. The first in the Soviet Union Valentin Purgin was deprived of the title Hero. In August 1940, the Military Collegium of the USSR Supreme Court sentenced him to death.

The 75 years that have passed since the beginning of the Soviet-Finnish war are a huge period of time, containing bright and memorable events, events and facts. Moreover, real witnesses and participants of those events, their feats and memories are important to us.