The story of one surrender

November 20, 2014
13
October 27 1870, one of the most shameful events in the military stories France. Marshal Francois Achilles Bazin, without a single shot, surrendered his 180-thousand army to the enemy, blocked in the fortress of Metz. All the soldiers and officers obediently disarmed and went into German captivity, no one opposed the traitorous order.

This was preceded by the defeat of Bazin’s army in the battles of Gravelotte and Mars-la-Tour, its retreat to Metz and the 70-day siege, during which the French did not even try to escape from the encirclement. This looks very strange, since in the submission of Bazin there were initially 198 thousands of servicemen, and in the Prussian army blocking him there were only 134 thousands. It should also be noted that Bazin commanded not reservists or untrained militia, but personnel divisions and corps, in which almost all officers and many soldiers had good training and combat experience.

The October 7 Bellevue fight, during which the French attacked the Prussians, was more like a demonstration than a real attempt to break the blockade, since from the French side only 23 thousand people took part in it - less than 15% of the city garrison. The Germans believe that this was not a breakthrough, or even reconnaissance by force, but merely a “foodstuff hike” to seize the German food stores and take out their contents. However, the French did not reach the warehouses, the attack was repulsed, after which Bazin did not take any action for 20 days. He was just passively waiting for his soldiers to eat all the supplies, and then capitulated.


There is a version that the marshal would coast his troops, so that after the quick defeat of France, of which he had no doubt, to use them as a weapon of a military coup. However, he underestimated the patriotism and perseverance of compatriots. The besieged garrisons of Paris and Belfort refused to surrender and steadfastly defended, and the formation of a new volunteer army began in the south of the country to replace Napoleon’s armies defeated in border battles.
Contrary to Bazen’s predictions, the war took a protracted nature, and in the meantime in Metz from October 20 began to slaughter combat horses and cook horse meat. Realizing that his hope to come to power on bayonets collapsed, Bazin ordered the troops to lay down weapon and handed his sword to the Prussian general von Kummer.
Approximately 150 of thousands of healthy soldiers and officers from among those who surrendered in Metz, the Germans interned in the camps until the end of the war, and the rest — the wounded, the sick, and the weak — were released immediately. Bazin in 1871, he returned from captivity, where he created a very comfortable environment and kept together with the former Emperor Louis Napoleon. The following year, he was brought to trial on charges of treason and sentenced to death, but President McMahon, taking into account the former merits of the marshal, replaced it with 20-year imprisonment.
Bazin was put in solitary confinement for particularly important state criminals on the island of St. Marguerite. Earlier in two centuries, no one could have escaped from it, but already a year later the 62-year-old obese old Bazin somehow miraculously succeeded! However, they suspect that he was simply secretly released under a secret presidential decree. After fleeing, Bazin settled in Spain, lived 15 for years and died in 1888. And Metz, together with the entire province of Lorraine, was annexed to the German Empire and was in its composition until the defeat of Germany in the First World War. 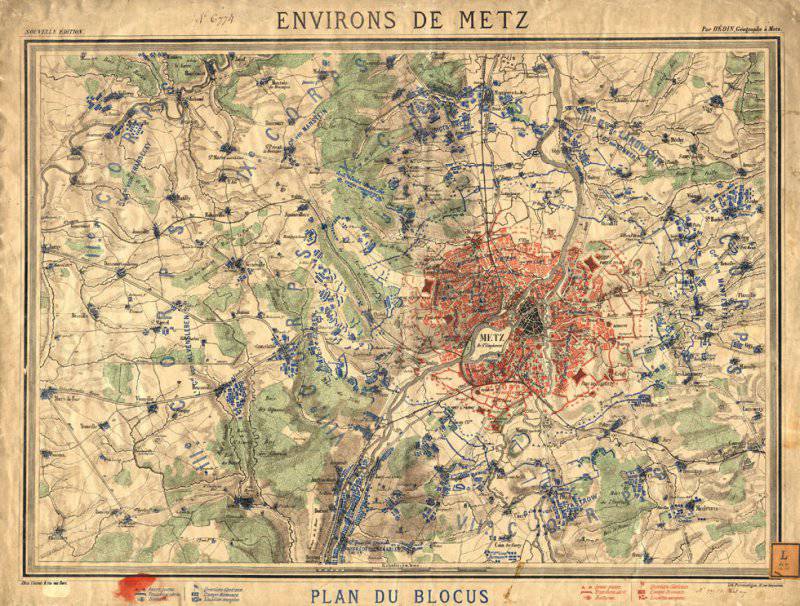 Map scheme of the Siege of Metz. It clearly shows how high the density of French troops inside the ring and how "thin" were the battle formations of the Prussian siege army.

Panorama of Metz. In the foreground is the Moselle River, behind it is a wall with loopholes surrounding the city. 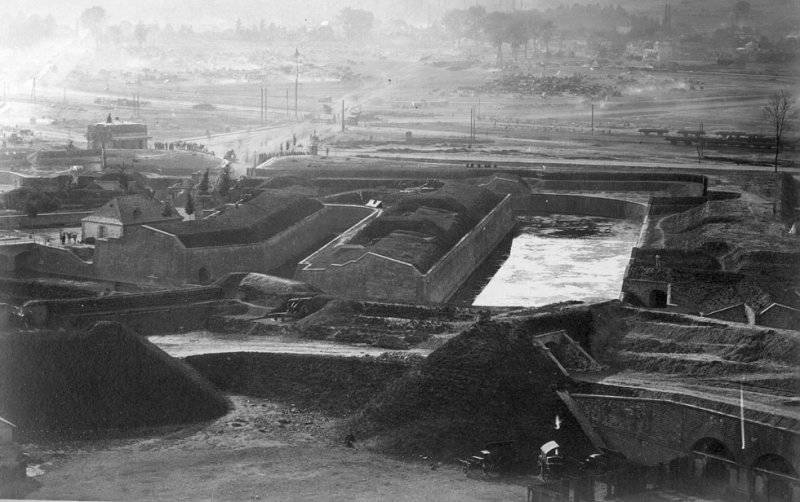 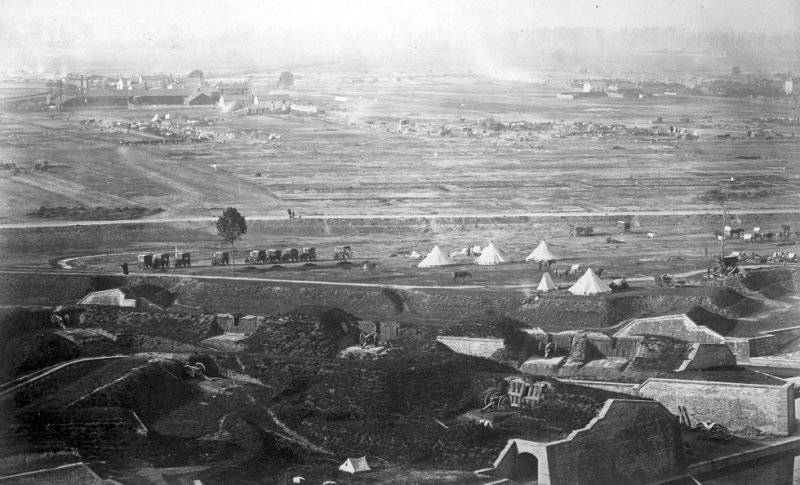 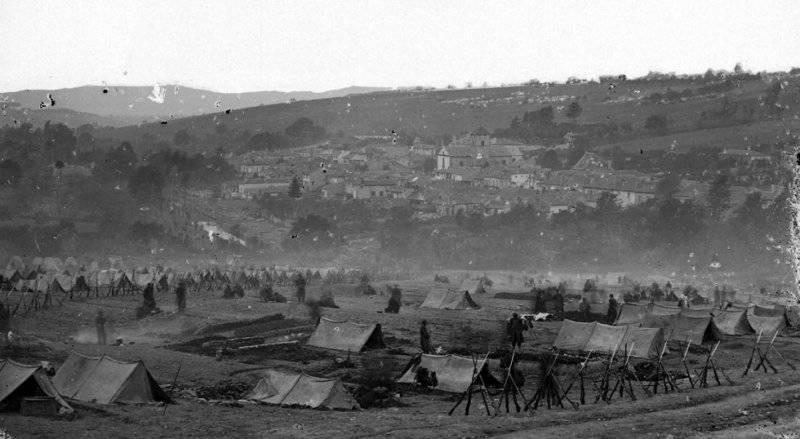 The camp of the German siege troops around the city. 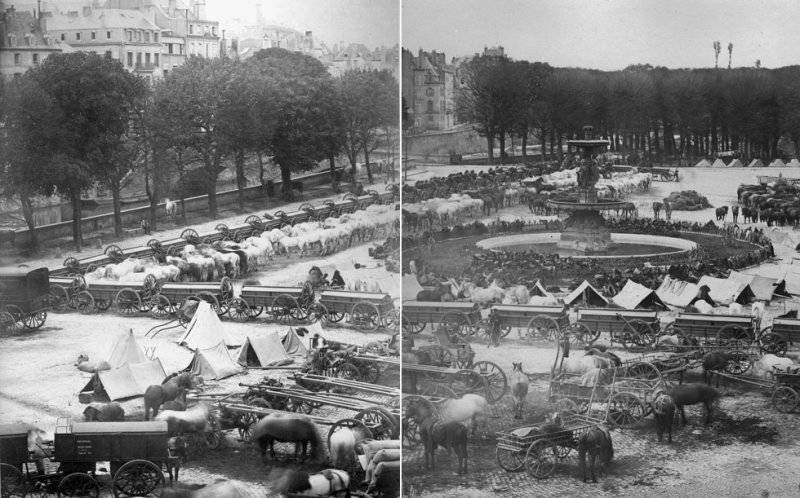 French wagon train and pontoon park in one of the city squares. 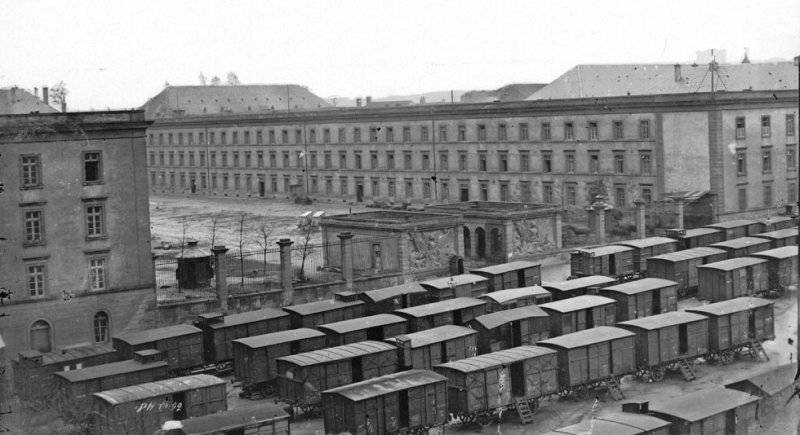 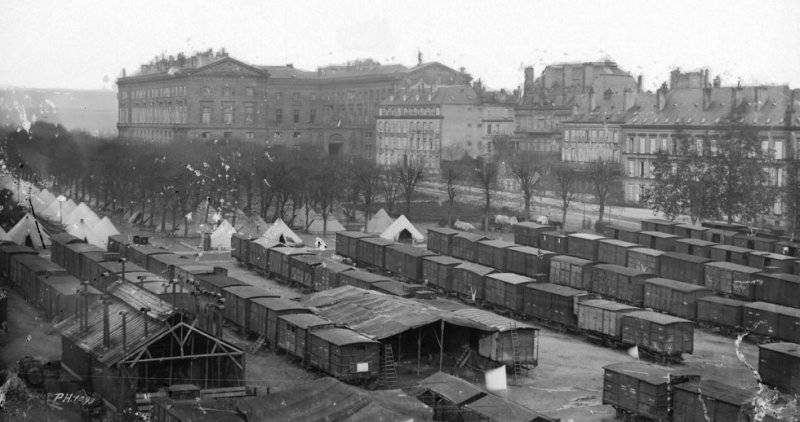 In 1870, Metz was a major railway junction. During the siege there were many trains, both empty and with various cargoes. After the capitulation of Bazin, they all went to the Prussians. 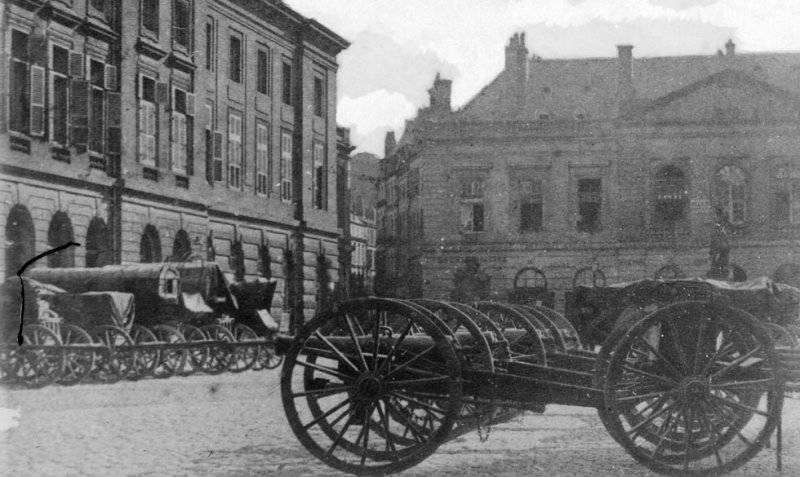 French field battery, which also became the trophy of the Prussian army. 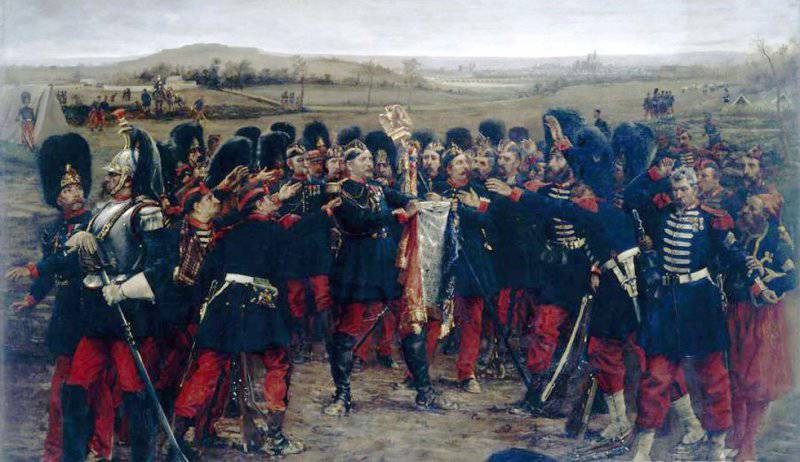 Simultaneously with the order of surrender, the French units were ordered to destroy their banners, which was done. In the picture, the soldiers say goodbye to the regimental banner before it is burned. 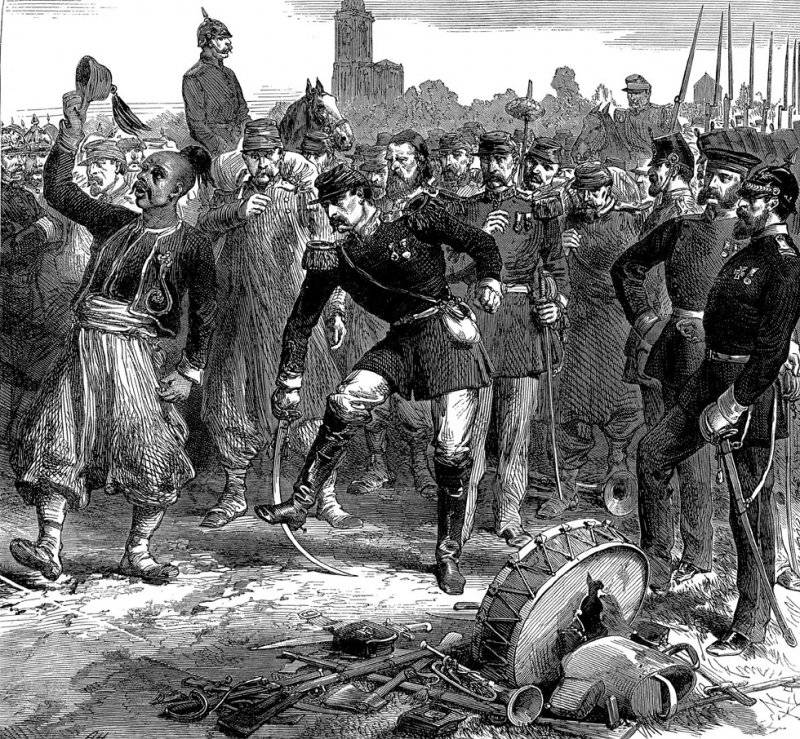 Surrender weapons to the Metz garrison. The officer picturesquely breaks his sword in front of the Germans, quietly watching this senseless posturing.

Marshal Bazin removes his cap in front of General von Kummer, who takes the visor in satisfaction. Behind - a column of French troops marching into captivity. 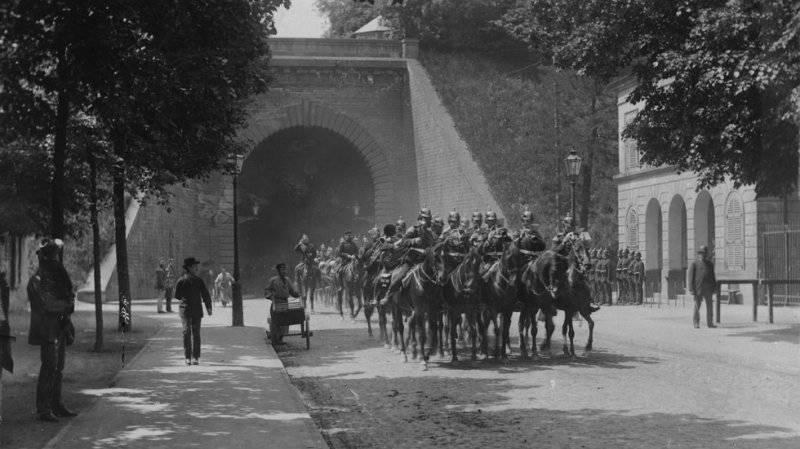 During the siege in Metz, there was a photo studio that took many single and group shots of French soldiers and officers. Probably, the customers of these images wanted to perpetuate their military merits, but the result was an extensive “gallery of dishonor”. Below - a few of its fragments. 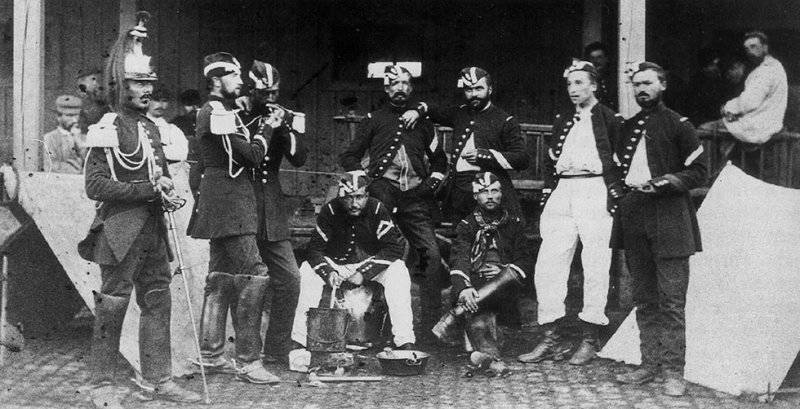 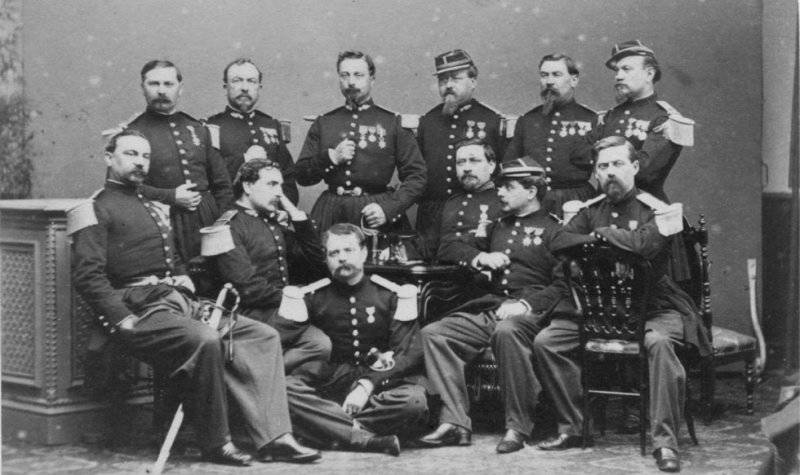 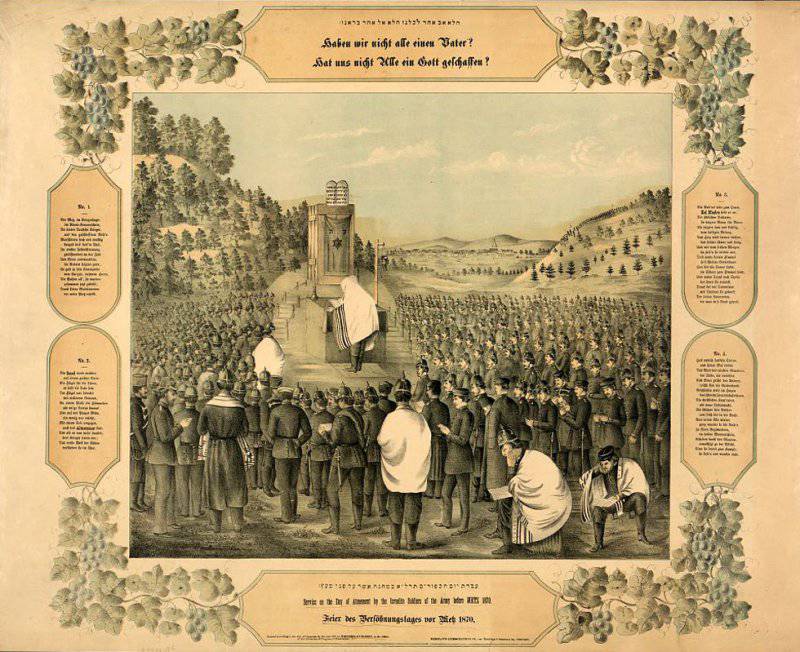 And another interesting picture "for a snack." German soldiers participating in the siege of Metz celebrate Yom Kippur. At that time, quite a lot of Jews served in the Prussian army, however, the artist, obviously, from pious motives, still greatly exaggerated the number of worshipers. According to the memoirs of Rabbi Gunter Plot, there were about 60 people.