November 14, 2014
23
The Russian Ministry of Defense conducted exercises in which an airmobile group of robots was used. New robot-sapper "Uran-6" and robot-fire "Uran-14" were engaged in demining a conventional ammunition depot, and also eliminated a fire there. The teachings were exploratory in nature. According to representatives of the Ministry of Defense of the Russian Federation, the purpose of the exercise was to find out how much money, effort and time it would take to alert this airmobile group and whether it was possible to put this group on combat duty as part of the calculations of the National Defense Control Center of Russia.

The first stage of research exercises using the air-mobile group of robotic complexes began on October 24 2014. According to the organizers of the exercise, the robotic group consisting of the Uran-6 demining complex and the Uran-14 fire extinguishing complex operated in an area with a high risk of undermining various artillery ammunition in raging fire sites. Two robots operated in parallel with each other. The exercises were held in the Moscow region under the guidance of specialists from the Main Directorate for Research and Development Activities and Technological Support of the Advanced Technologies of the Ministry of Defense of the Russian Federation. 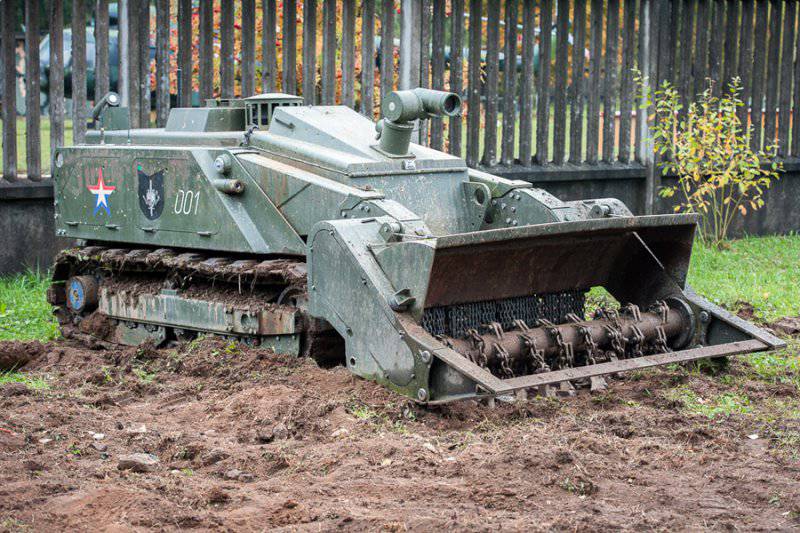 It is important to understand that anti-tank and anti-personnel mines are of the type weapons, which can declare itself in a dozen years, after the artillery volleys fell silent and ink dried on peace treaties. Given this fact, for sappers who are focused on demining, there is practically no peacetime. The land today is flavored not only with the huge number of mines that recent conflicts have left behind, but also with a large number of deadly "gifts" since the Second World War. At the same time, one of the trends of modern military science is the creation of unmanned equipment and systems, the engineering troops need such equipment in the first place. And for Russian sappers who work in the Caucasus, such equipment is doubly needed.

The newest Russian robotic demining complex is Uran-6, which was established by OJSC 766 UPTK (Production and Technological Equipment Department, Moscow Region). This sapper complex has already passed the acceptance tests in Chechnya - in the Sunzhensky district. Here, the Uranus-6 robotic complex was engaged in the continuous cleaning of forests and agricultural lands from a variety of explosive objects. 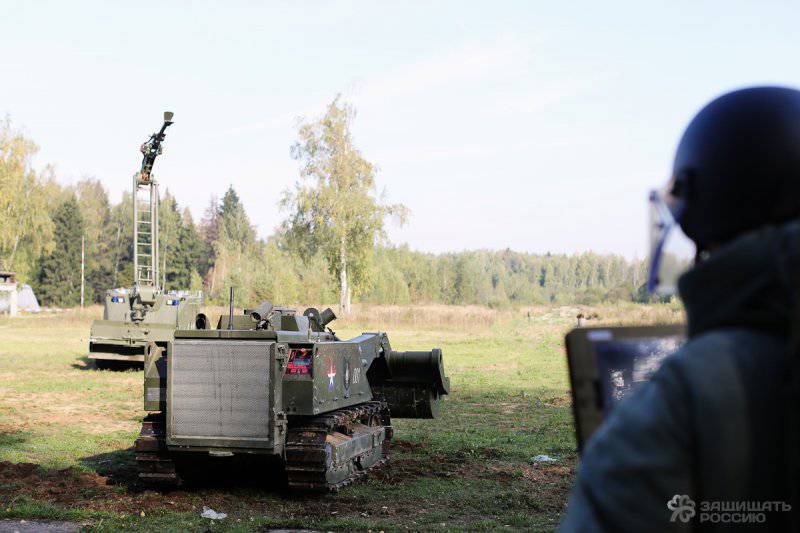 The new robot-sapper "Uran-6" is a tracked self-propelled radio-controlled mine trawl. Depending on the tasks that are assigned to the complex, it can be equipped with up to 5 various trawls, as well as dozer dumps. The operator can control the complex at a distance of up to 1000 meters (the device has 4 video cameras that provide all-round visibility). The Uran-6 robotic deminer complex is able to detect, identify and destroy any explosive item with a command that does not exceed 60 kg of TNT. In this case, the robot ensures complete safety of personnel. The “Uran-6” ammunition found on the ground neutralizes either by destroying them physically or by putting them into action.

Dmitry Ostapchuk, general director of 766 UPTK, told journalists about the technical features of the tested equipment. According to him, the new Uran-6 robotic complex is designed for demining urbanized areas of the terrain, as well as mountainous and light-forest areas. This complex can be equipped with five different interchangeable tools: boy, roller and milling trawls, as well as bulldozer blades and mechanical gripper. Several types of trawl are used to enable working with different types of soils. For example, the pavement is used on soft types of soil, the roller is used on hard surfaces. Moving on a flat terrain, the Uran-6 robot sapper can perform demining at speeds up to 3 km / h, and on rocky terrain, its work speed decreases to 0,5 km / h. 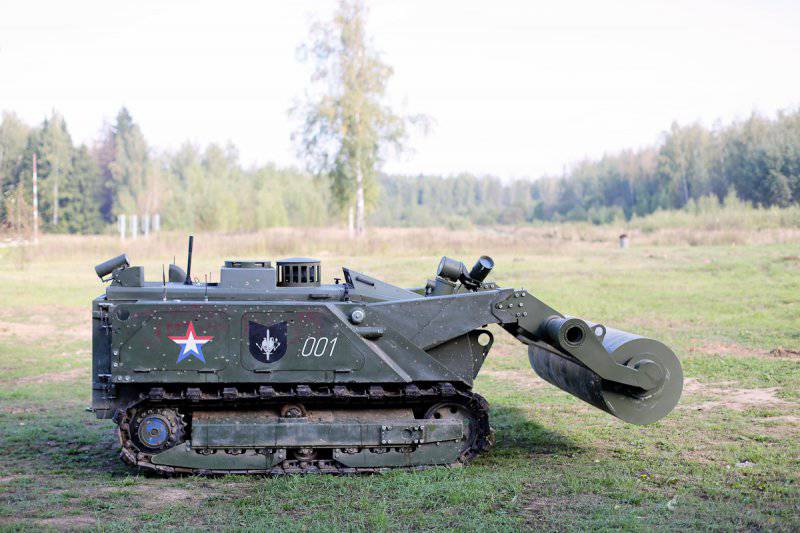 At the tests, which were held in Nikolo-Uryupino near Moscow, the Uran-6 complex, equipped with a roller trawl, was presented. This tool was a set of heavy rolls mounted on an axis, which rolled on the surface of the ground in front of a sapper robot. Boikovy trawl acts differently. It is arranged as follows: on the shaft on special chains, the strikers unwind, which reach speeds of up to 600-700 rpm and thresh on the ground, literally plowing the ground down to the depth of 35, see. At the same time, the purpose of all these devices is the same — to destroy an explosive device found on the ground or to bring it to a blast. At the same time, the robot-sapper “Uran-6” is designed in such a way that quite strong explosions can constantly rattle right in front of it. The robot has a reservation, and its tools are able to withstand explosions of explosive devices up to 60 kg in TNT equivalent.

The weight of the armored sapper is rather big - about 6-7 tons, depending on the configuration. At the same time, the robot is equipped with an 190-strong engine, which provides it with a fairly high power density - about 32-37 hp. per ton. A sapper robot with an 1,4 meter height is able to overcome obstacles up to an 1,2 meter height. 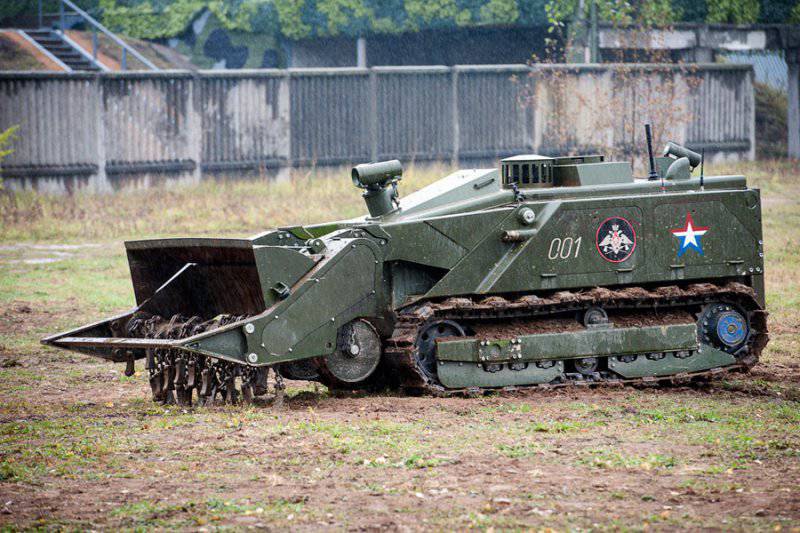 If we talk about the results of the field tests of the robot, then according to the press service of the Southern Military District (SKR), they can be considered successful. From the end of July to the end of August 2014, the robot-engineer “Uran-6” managed to clear the order of 80 thousand square meters of agricultural land, destroying about 50 explosive objects. During this time, no failures or malfunctions of the complex were recorded. Calculations were also made that showed that one robot-sapper Uran-6 was able to complete the amount of work per day that a unit could make of 20 sappers.

Military sappers who work in the Chechen Republic have already appreciated the new Uran-6 robotic system. The new sapper robot is equipped with a variety of mine trawls, but its main feature is the availability of equipment that allows you to not only find and defuse all types of existing ammunition, but also correctly identify them. Due to this feature, Uranus-6 can distinguish artillery shell from aviation bombs or anti-tank mines.

The high-altitude area located in the Vedeno district of the republic (at an altitude of 1600 meters above sea level) has become the place of trial operation of the novelty in Chechnya. There are still preserved minefields, which are quite difficult to neutralize using ordinary engineering means. At the same time, due to their weight (under 6 tons and above), this sapper-engineer was thrown into the mountains with the help of a heavy transport helicopter Mi-26.

If this robotic complex gives a good account of itself in a variety of natural conditions, Russian generals will raise the issue of starting its mass production in the interests of the Russian Armed Forces. Earlier, analogs of such demining complexes were used by the Russian Emergencies Ministry, but there were no such complexes in the Russian army. In the event that the serial production of these sapper robots by the end of this year is launched in Russia, the first batches will begin to enter into service with the troops of the Southern Military District at the beginning of 2015 of the year.