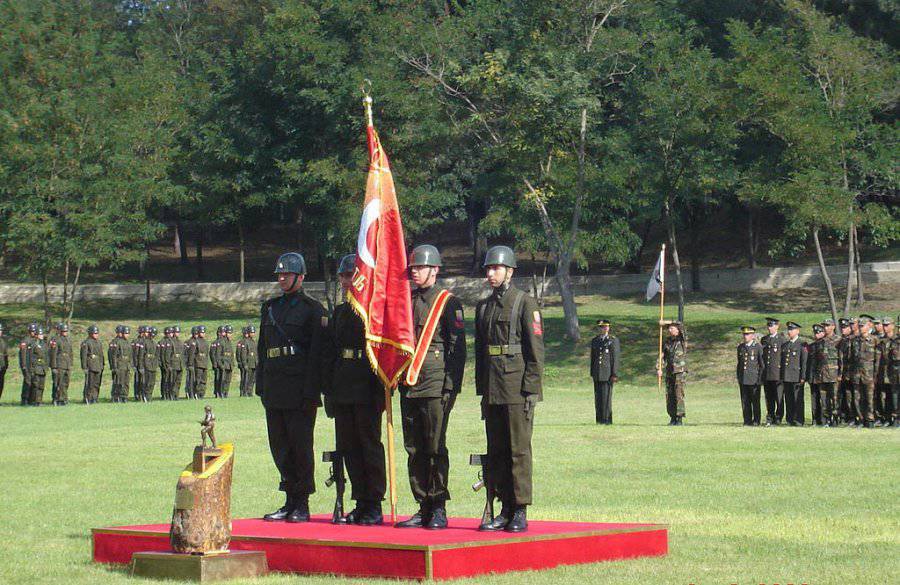 The army of Turkey is recruited by conscription, the draft age of 20 years, the term of compulsory military service is 15 months. Upon dismissal from the army, a citizen is considered military duty and consists of a reserve up to the age of 45. In wartime, in accordance with the law, men aged from 16 to 60 years and women from 20 to 46 years who can wear weapon.

The supreme body of the operational management of the armed forces is the General Staff, which is headed by the commander-in-chief of the armed forces. He is appointed by the President on the recommendation of the Council of Ministers. Subordinate to him are the commanders-in-chief of the types of armed forces: ground forces (SV), air force (Air Force), naval forces (Navy), gendarmerie (up to 150 thousand) and coast guard. According to the Turkish table of ranks, the chief of the General Staff ranks fourth after the president, the chairman of parliament and the prime minister.

The operational command of the army commanders is six separate artillery regiments and four army regiments aviation.
Directly GC SV subordinated two infantry regiments (23-th and 47-th), special operations forces in the 5 commando brigades and individual army regiments SN (available in 2-th and 4-i field armies) through the command of special operations. Through the command of the army aviation, four regiments of army aviation are subordinate to him. Recently, a brigade of "humanitarian aid" has appeared directly under the command of the SV commander in chief.
Training of HR specialists takes place in training units and training centers:
• 1-I, 3-I, 5-I and 15-I infantry brigade;
• 59-I Artillery Training Brigade (Erzincan);
• Training Center for Armored Forces (Etimesgut).

The highest level of selection is envisaged when recruiting staff officers. This is achieved through the voluntary enrollment of young men in military schools and a complex of checks of political reliability, which allows forming the officer corps mainly from highly educated segments of the population. Officers are trained in military schools, which include high schools (military gymnasiums and gymnasiums - an approximate analogue of Russian Suvorov schools), higher schools of the armed forces, secondary schools of the armed forces and military academies. Officers are also trained in civilian higher education institutions in the military faculties.

The main link in the training of officers of the personnel department is the Kara Harp Okulu Higher School (Kara harp okulu). In this military school, future officers receive higher general and secondary military education. Duration of training - 4 year. After graduating from college graduates are awarded the title of "lieutenant". Further, graduates, as a rule, are sent for one or two years to the schools of the armed forces and services.

Only officers, graduates of military schools in the rank of senior lieutenant-major, who served in the army for at least three years, are admitted to the military academy of the army. Duration of training - 2 year.

Only graduates of the academies of the armed forces can become students of the Armed Forces Academy. They are prepared for work in the staff of the Ministry of Defense, in the General Staff, in the joint NATO headquarters, in the headquarters of the division - the army. The term of study is five months. Along with military schools, there is a network of courses for the retraining of officers for different branches of troops. Some officers undergo retraining abroad, mainly in the United States and the Federal Republic of Germany.

The main tactical unit in the NE of Turkey is a brigade. In 2009, the CB contained 9 tank, 16 mechanized and 11 infantry brigades. As a rule, brigades are directly subordinate to the army corps or are part of divisions.

According to the “Armed Forces - 2007” program adopted in 2014, by the end of 2014, it is planned to reduce the number of combat troops to 280-300 thousands, simultaneously with equipping the troops with modern weapons and military equipment and controls. It is planned to liquidate two field armies (3-th field and 4-th Aegean), create a single command of the three types of armed forces (land forces, air forces and navy) and convert the existing General Staff to the appropriate "joint" headquarters, which will be subject to command of the types of armed forces . On the basis of the headquarters of the 1 th field army and the 2 th field army, the commands of the Western and Eastern groups of forces will be created, and the entire territory of Turkey will be divided into two parts in military administrative and operational terms.

In recent years, the number of the Turkish army has been reduced by 10-20 thousand people a year, many units and units are disbanded. For example, over the past three years, 5 tank brigades from 14 have been disbanded, the remaining 9 tank brigades are equipped with modern and modernized technology. Part of the infantry brigades disbanded, and some transferred to the states of mechanized brigades. The task of combating the military formations of Kurdish separatists is entirely shifted to the gendarmerie, for which it is strengthened by the BTT, which is transferred from the NK. 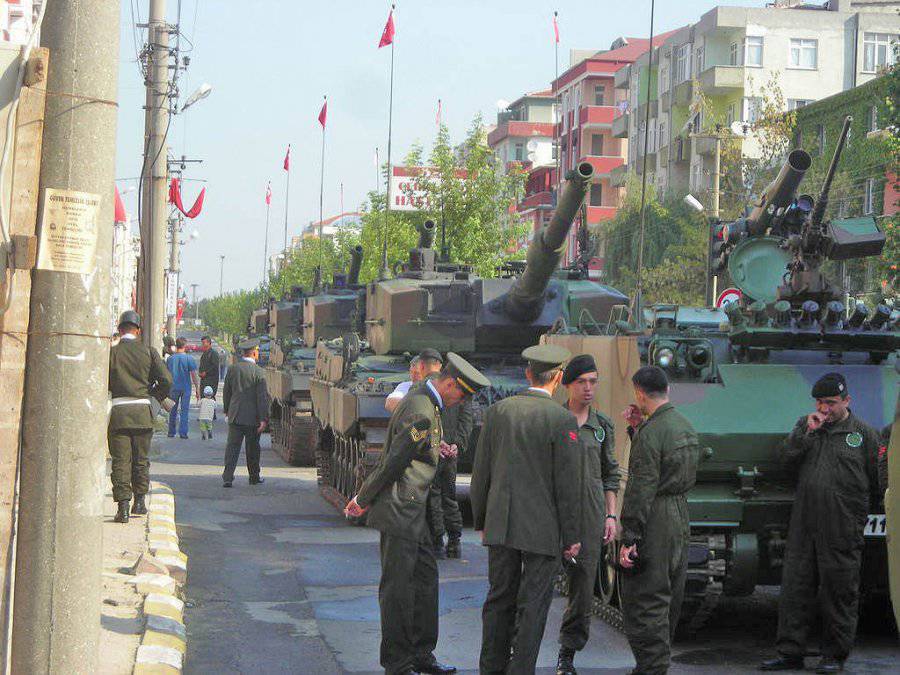 Leopard 2А4 Turkish army on the street in Ankara

Armored vehicles in the Turkish army are represented by foreign models and samples of their own production. The main striking force in the army are tanks. According to the data submitted by Turkey to the UN Register, the 3363 tank was listed as the 31.12.2007 of the year. The tanks are part of the mechanized (1 battalion) and tank (3 battalion) brigades, divisions of the 28 and 39 of the mechanized divisions.

In recent years, Turkey has been actively utilizing outdated models of tanks and at the same time carrying out the modernization of combat-ready equipment. The ambitious project of creating its own tank Altay, widely advertised in recent years, entered the contract stage (signed on July 29, 2008, with the general contractor, the Turkish company OTOKAR and subcontractor by the Korean firm Hyundai-Rotem), the installation batch of tanks was planned to be released in the 2012 year. In the current situation, Turkey has taken very practical measures: it bought tanks Leopard 2 in Germany, modernizes tanks Leopard 1 and М60. Data on the number of specific models of armored vehicles in the Turkish army are contradictory. Based on the study and comparison of various sources, the most reliable figures were obtained. 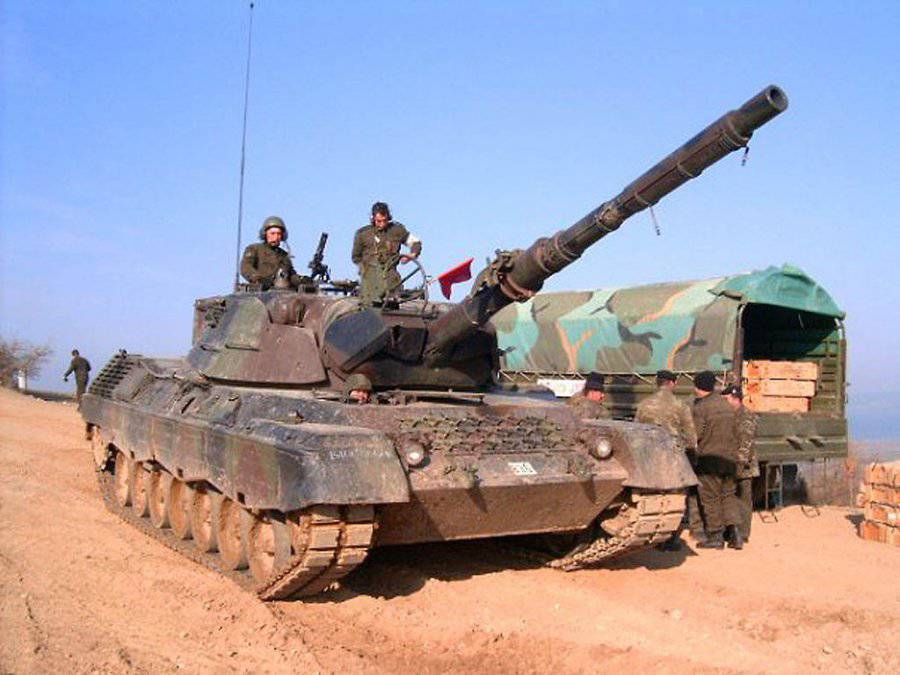 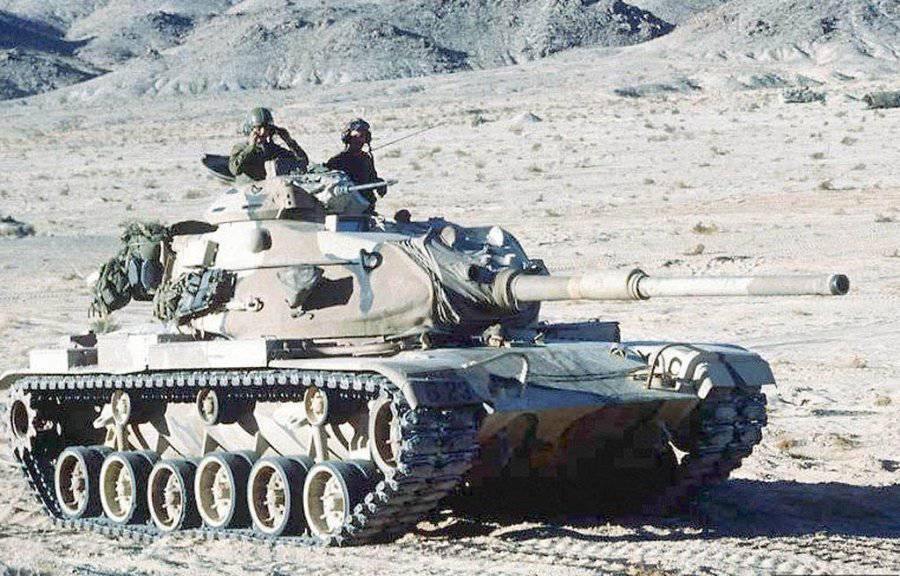 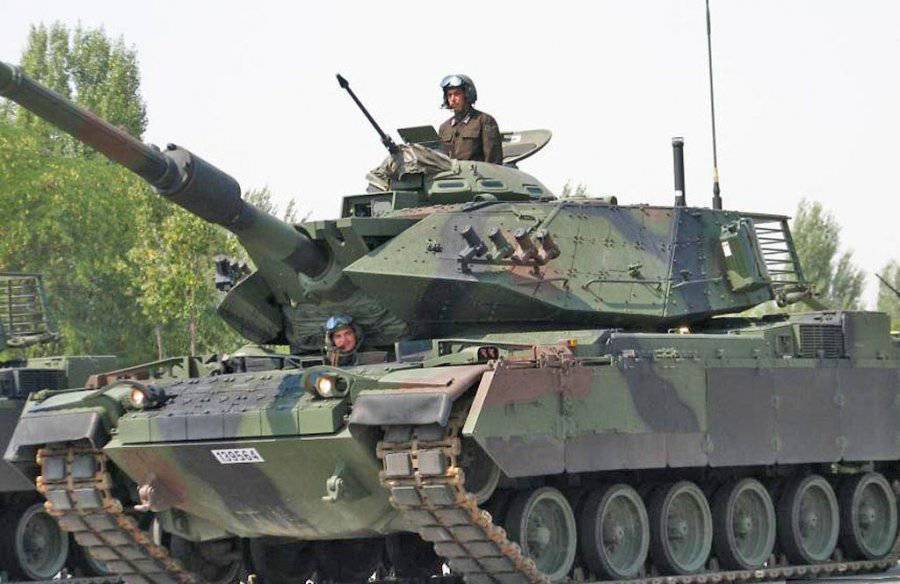 М60-Т Sabra Turkish army at the parade in Ankara

The M48 tanks are currently derived from linear formations (with the exception of 287 units M48А5Т1 / Т2 as part of the Turkish forces in Cyprus). They are used in training centers (for example, to designate the enemy, infantry run-in), stored, partially altered in BREM and bridge laying systems, disassembled, and disposed of.

Armored combat vehicles are represented by tracked infantry fighting vehicles, tracked and wheeled armored personnel carriers, and vehicles based on them. According to the UN Register, at the end of the gendarmerie and gendarmerie 2007 BBM was listed at the end of 4625. 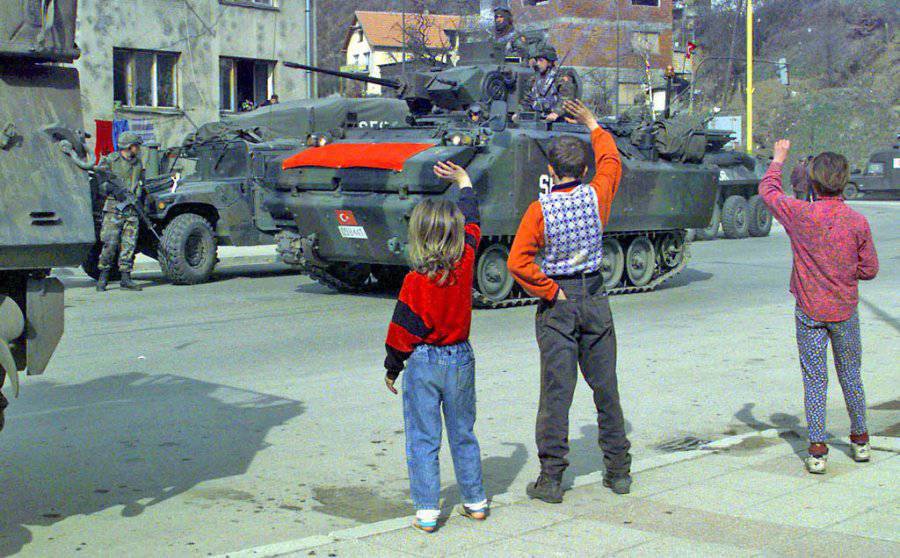 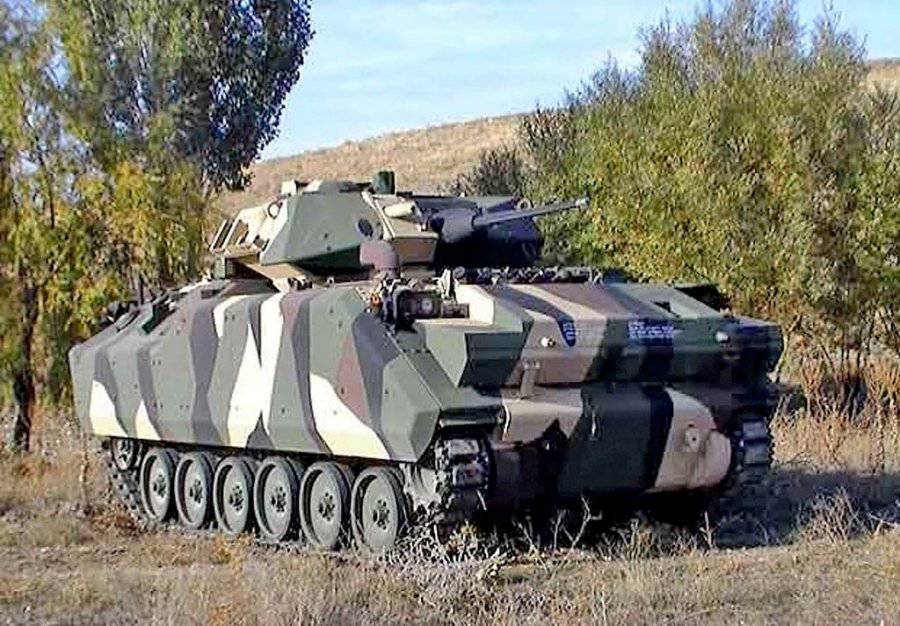 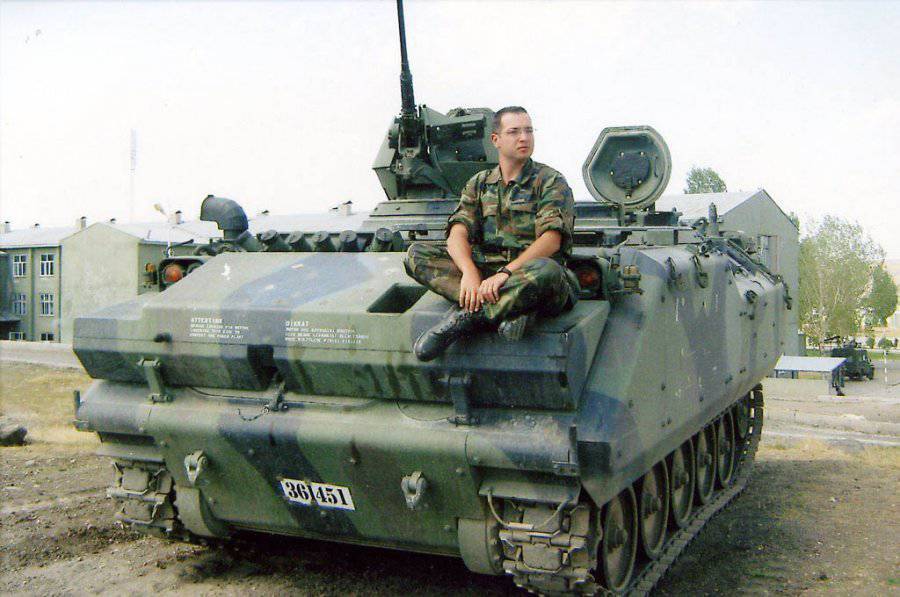 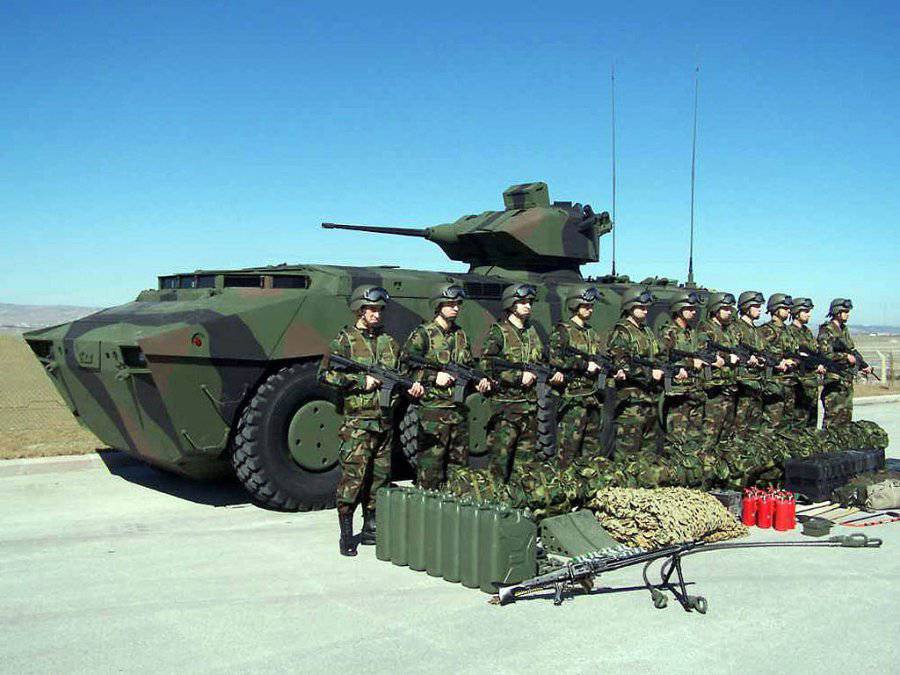 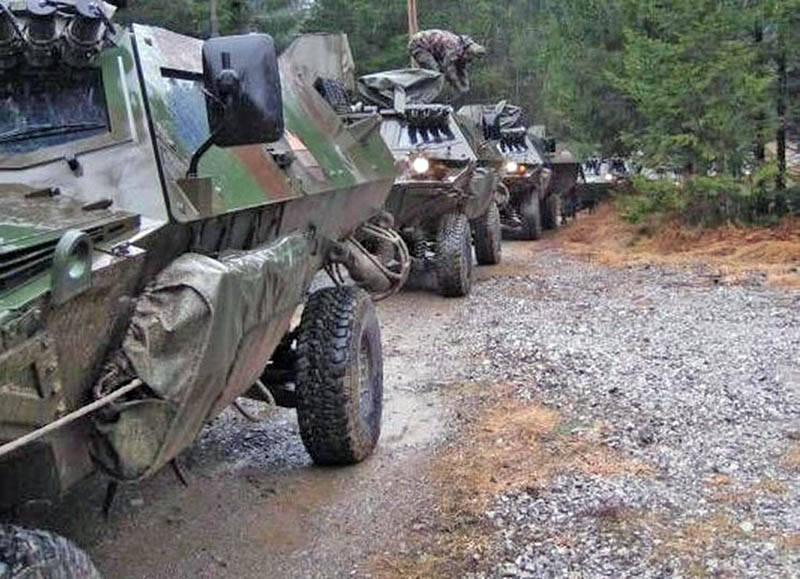 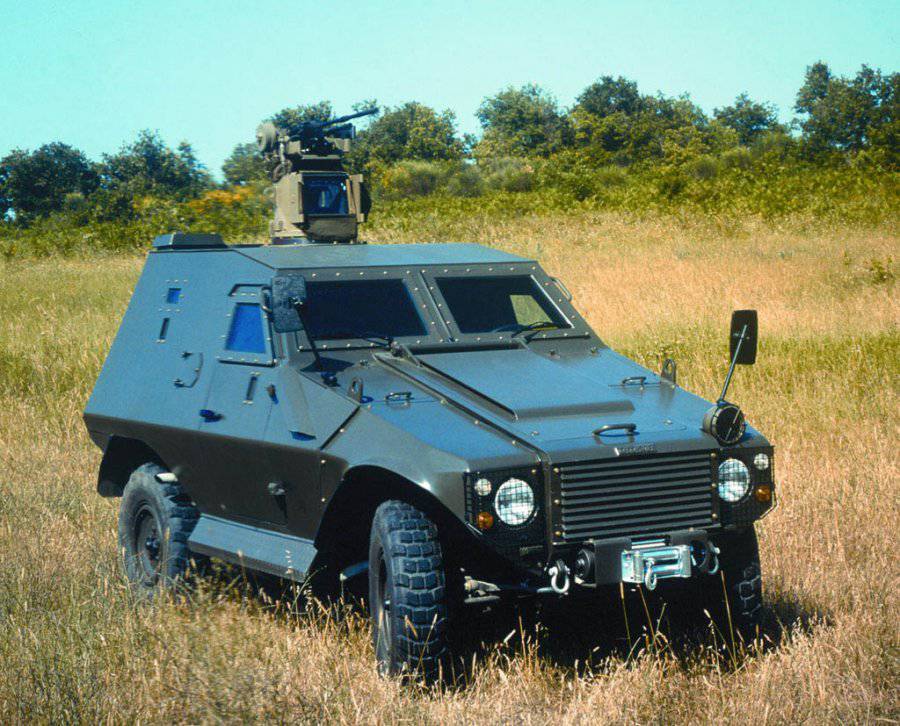 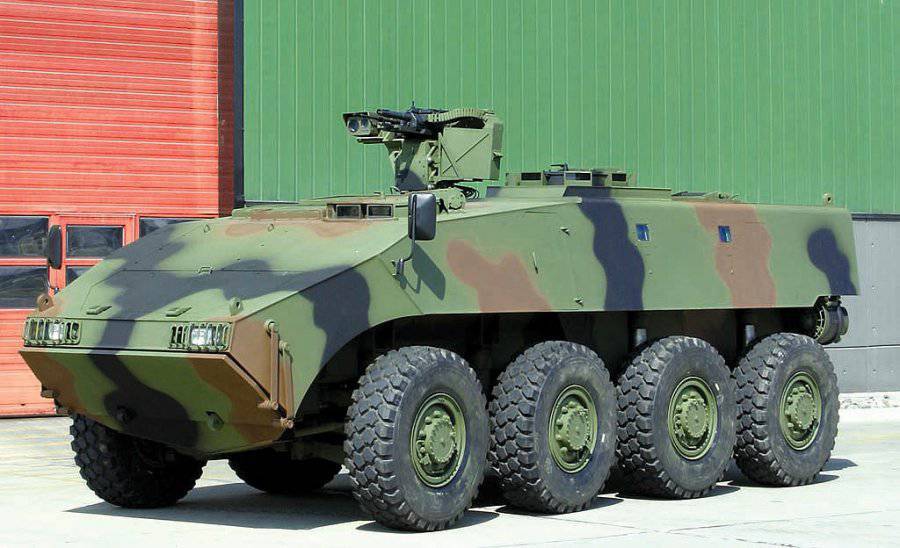 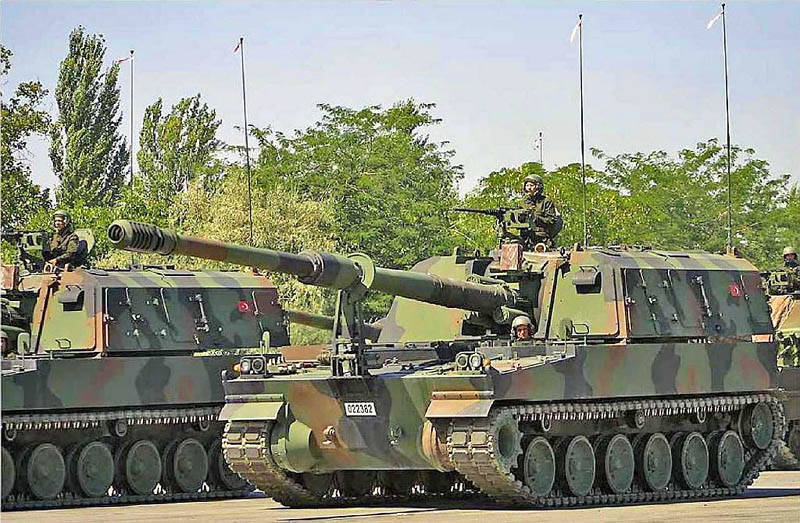 Turkish SAU T-155 Storm at the parade in Ankara 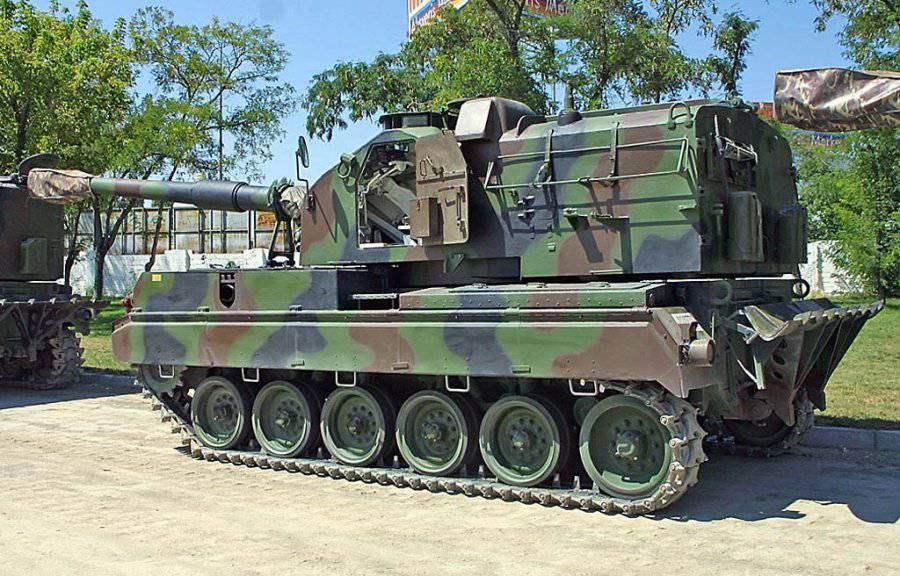 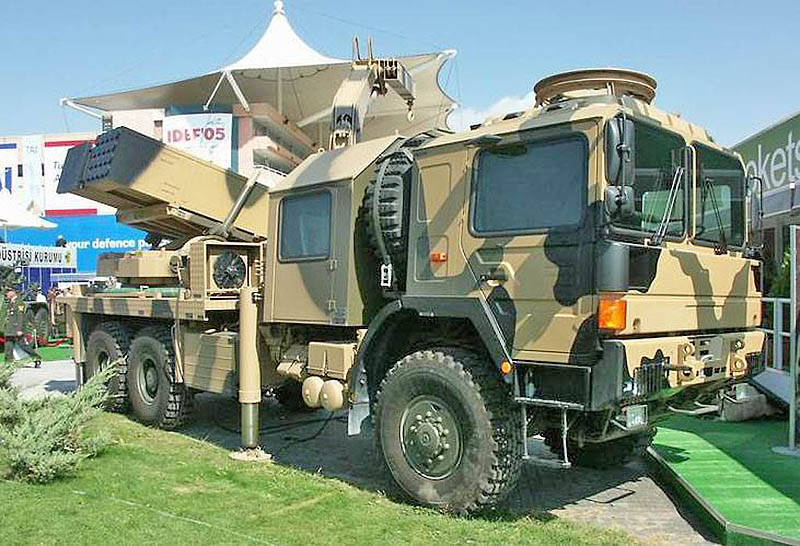 Turkish MLRS T-122 at an exhibition of weapons 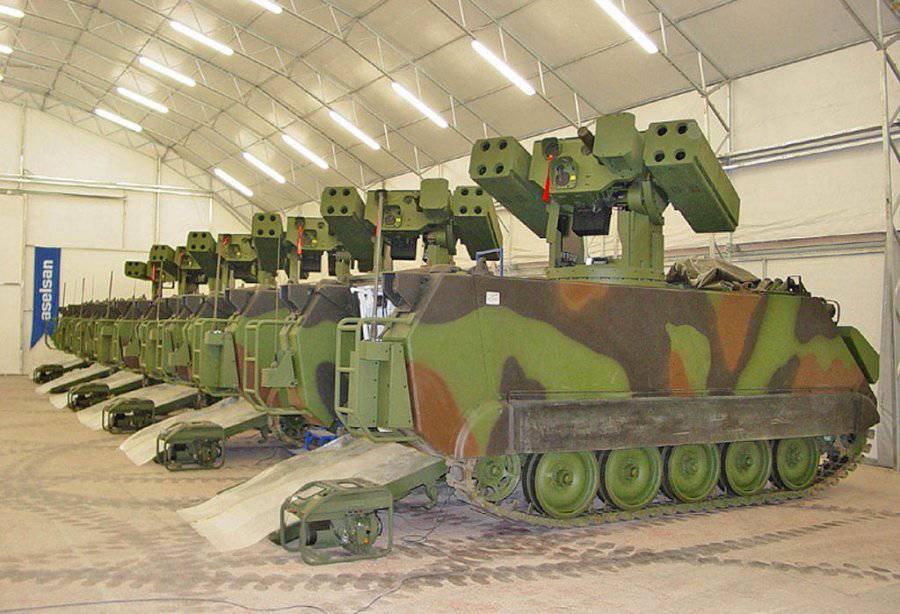 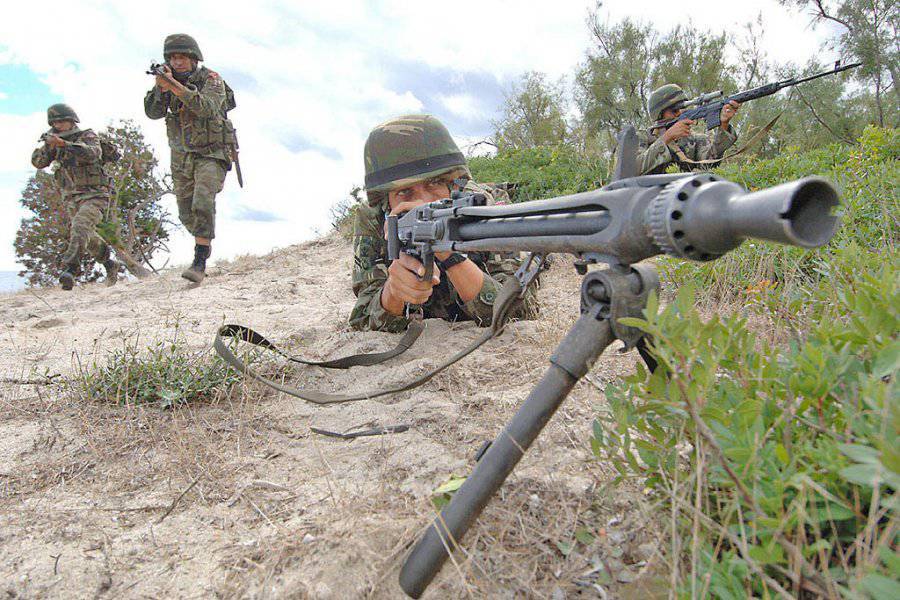 The strengths of the Turkish army are:

• high authority and support of the armed forces in wide sections of Turkish society;
• the exceptional position of officers in the military environment and in society;
• a stable vertical of military command, corporate and clan (by types of troops, units) solidarity;
• tough military discipline in units and divisions;
• army saturation with military equipment and heavy weapons;
• availability of modern controls in the operational and tactical levels;
• integration into the communications, command and control, and air defense systems of NATO;
• systematic combat and operational training of troops;
• availability of its own industrial base for the production, repair and modernization of ammunition, means of control and communications, many types of weapons and military equipment.

The 1, 2 and 3 field armies are capable of creating peacetime forces of about 50000 people and 300-350 tanks each in peacetime forces. Although the Russian Federation has no border with Turkey, the potential for military clashes with the Turkish army exists due to two factors. 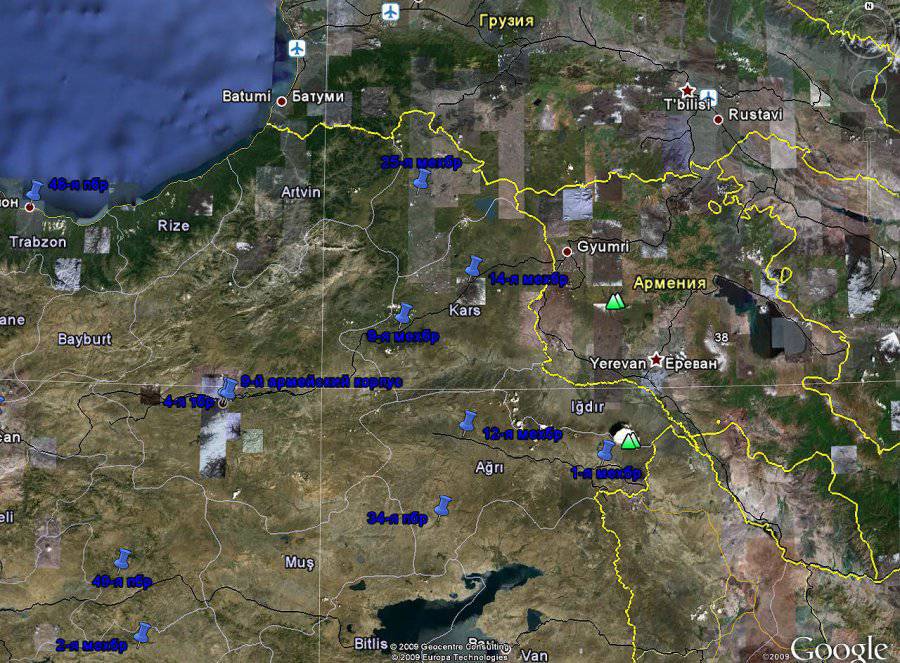 The first factor is the presence of a defense agreement between the Russian Federation and the Republic of Armenia. Two separate motorized rifle brigades (formerly 102-I military base) of the Russian army are stationed in Armenia and Gyumri in Armenia. Near the borders of Armenia, the 9 Army Corps of the 3 Army Field Army of the Army of Turkey, consisting of one tank, six mechanized and four infantry brigades, are deployed. With these forces, the Turkish army is able in a relatively short time (5-7 days) to create an offensive group of 40-50 thousand people, 350-370 tanks, up to 700 guns, mortars and RSZO of field artillery, army army, armies, regimental artillery, army army, armies, mortars and RSZO in the operational area of ​​Gyumri - Yerevan for a relatively short time (15-20 days). , providing support for the grouping of several squadrons of front aviation. During the 80-100 day it is possible to expand this grouping to 600-700 thousand people, 1200-1300 tanks and XNUMX guns and mortars.
The second factor is Georgia’s possible entry into NATO. In this case, the deployment of a Turkish army grouping on the territory of Georgia is possible in one operational direction: either the Abkhaz (here a Russian motorized rifle brigade is deployed according to a defensive agreement with Abkhazia) or the Russian motorized rifle brigade is deployed here according to a defensive agreement with South Ossetia. Specific physical and geographical conditions of theater and limited road network increases the time redeployment and the deployment of Turkish groups (40-50 thousand. Man, 350-370 tanks, 700 guns, mortars and MLRS Field Artillery) to 12-15 days (with a transportable inventory) or up to 20-25 days (with the accumulation of stocks for the entire operation). On the coastal flank of the Abkhaz ON, the Turkish fleet is able to support the actions of the army by landing an operational-tactical naval assault force with a force up to the brigade.
At the same time, for a group advancing on one operational direction there arises the threat of a flank strike from another operational direction. It is difficult to create a grouping sufficient for actions on two divergent IT simultaneously. The capacity of the theater is limited, the operational deployment timeframes increase in this case to 25-30 days, which largely depreciates such a decision.

We are in Yandex Zen
Army "Isthmus". From Honduras to Belize
The armed forces of Syria on the eve and during the uprising in the republic (2011 — 2013)
19 comments
Information
Dear reader, to leave comments on the publication, you must to register.