November 13, 2014
73
Now, Chinese Zhuhai receives guests of the Airshow China 2014 aircraft salon, and a few days ago, China demonstrated its new armored vehicles at the exhibition grounds of this city. Among other exhibits was shown a new development of the corporation NORINCO - wheeled tank ST-1. This machine, created on the basis of existing developments, was first introduced in early September of this year and is intended for export deliveries.

The new wheeled tank is another combat vehicle based on the chassis of the wheeled armored personnel carrier ZBL-09. The chassis after a relatively small refinement is equipped with a tower with a tool and a set of special equipment. It should be noted that the externally wheeled tank ST-1 resembles the well-known ZTL-09 armored vehicle of a similar class for quite some time. However, a detailed examination of the two cars shows that in the case of the new ST-1, the base chassis has undergone much smaller changes than the ZTL-09 chassis. In this case, the wheeled tank ZTL-09 is supplied only to the Chinese armed forces, and the ST-1 was originally developed as an export vehicle.

The ST-1 wheeled tank has an armored hull, with a minimum of changes borrowed from the ZBL-09 base armored personnel carrier. The body is assembled from relatively large rectilinear sheets of armor, mated at different angles, which gives the car a characteristic angular shape characteristic of modern Chinese and foreign armored vehicles. The main hull lines in the processing of the chassis for use on the new car remained the same. The ST-1 wheeled tank has an upper frontal part located at a large angle to the vertical, as well as a narrow middle and inclined lower part. The sides of the machine are assembled from several plates of different sizes.

The layout of the internal volume of the case remains the same. In front of the hull at the right side is the engine and part of the transmission units. To the left of the engine compartment is the control compartment with the workplace of the driver. The dimensions of the tower did not allow to save the place of the commander of the car with the hatch in the roof of the hull. For this reason, immediately behind the engine and driver is a fighting compartment with a tower. In the stern of the hull there is a volume used to accommodate various objects. In the stern sheet there is a door for landing in the car and loading ammunition. 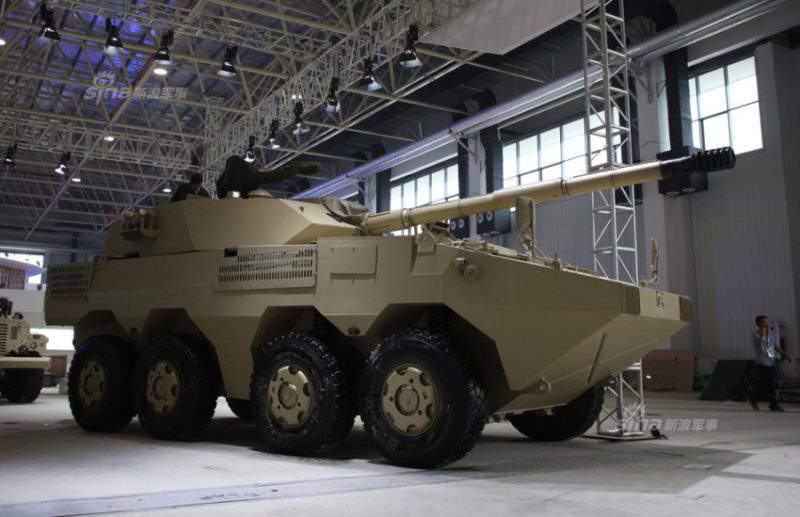 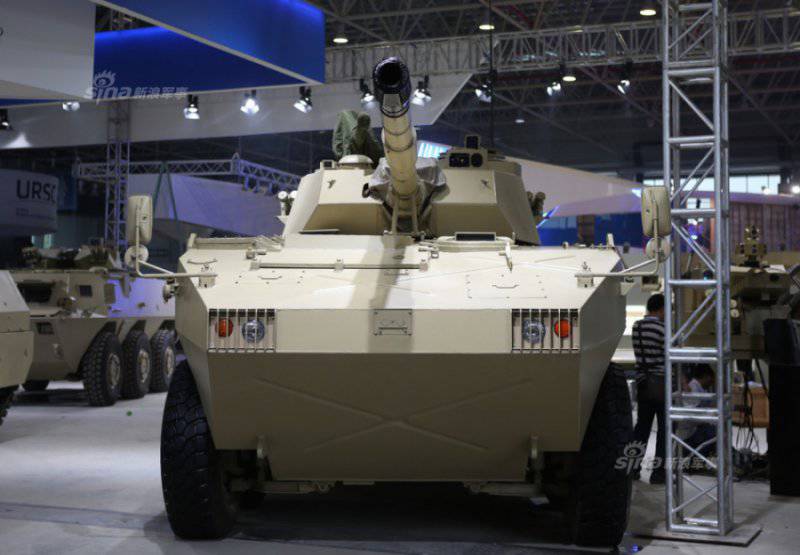 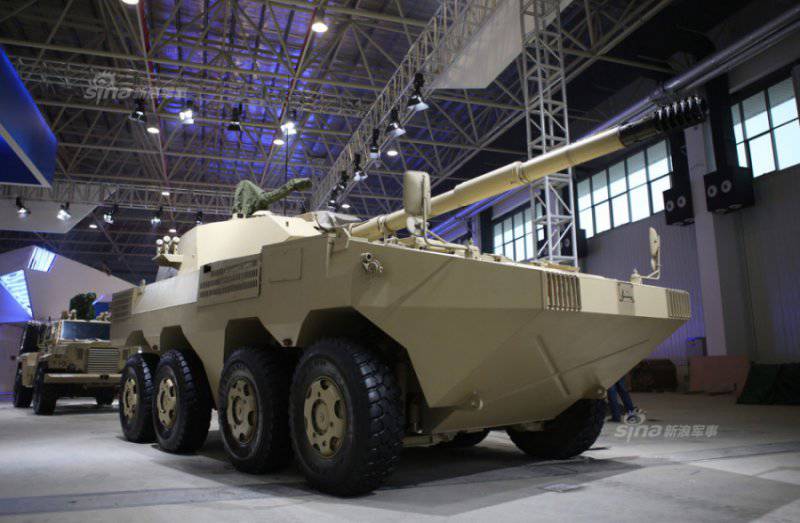 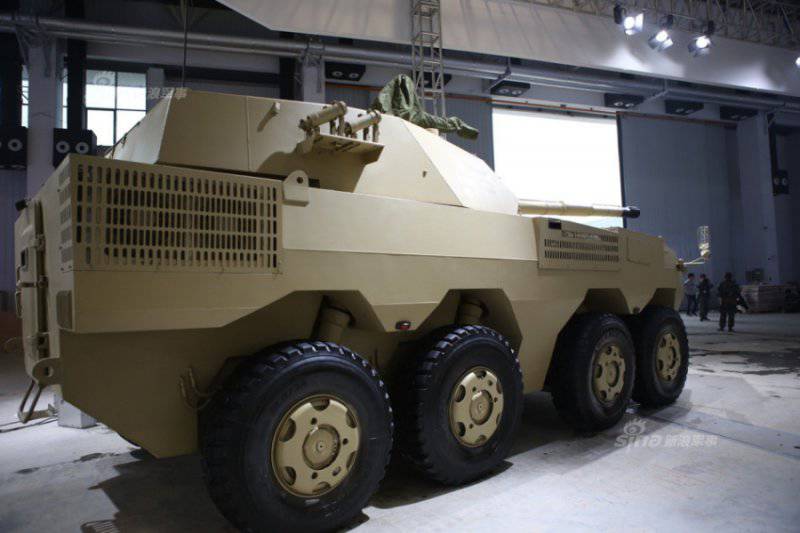 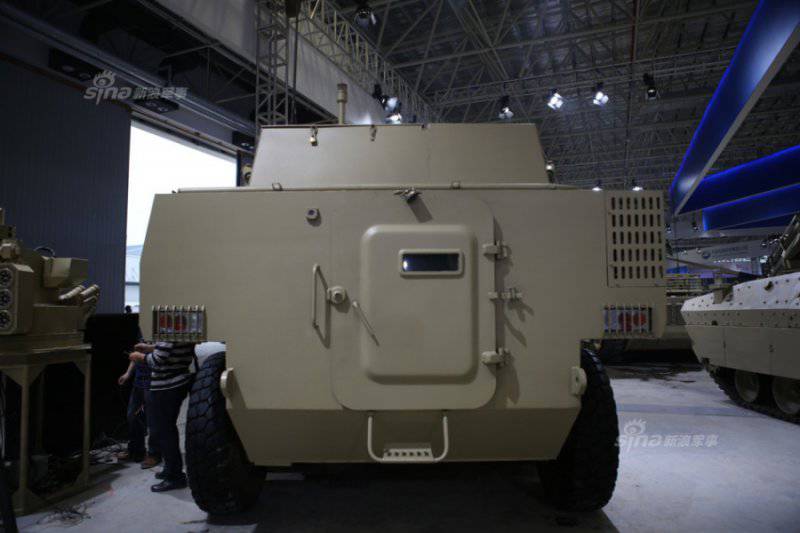 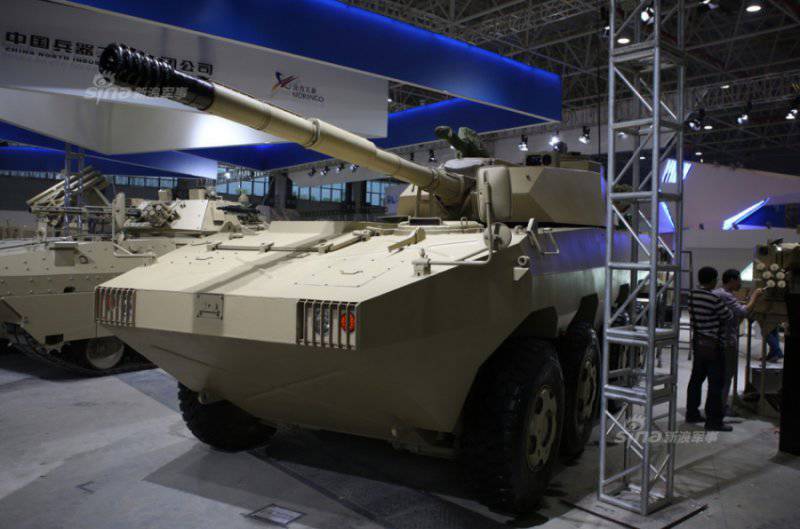 On the right side of the car there are two lattices that complement the recognizable appearance of the car. One of them is located in the middle of the board next to the engine compartment and covers the muffler. The second grill is located in the stern and fans are visible under it. The latter, apparently, are used by the ventilation system to remove powder gases from the crew compartment and create acceptable conditions inside the hull.

The type of power plant is unfortunately unknown. According to reports, the base armored personnel carrier ZBL-09 is equipped with a German-made Deutz BF6M1015C diesel engine with a capacity of 440 hp. Some sources claim that a similar engine is installed on wheeled Tanks ZTL-09, providing them with relatively high performance. Thus, the ST-1 export wheeled tank can also have a 440-horsepower German diesel.

The car received a chassis with a wheel formula 8х8. The wheels have independent lever suspension with hydraulic or hydro-pneumatic shock absorbers. The shock absorbers of the two rear pairs of wheels are angled, which makes it possible to more effectively extinguish the recoil energy of the gun. An important difference between the ST-1 wheeled tank and the base ZBL-09 armored personnel carrier is the lack of jet propulsion. In the stern of the armored personnel carrier there were two water cannons. They were stored on the ZTL-09 wheeled tank, but not on the ST-1. Probably, the export wheeled tank has a relatively large combat mass and therefore cannot cross water obstacles.

On the pursuit of a larger diameter, a tower of characteristic complex shape formed by several armor plates was installed. The frontal part of the tower has a form peculiar to modern tanks. On the tower of the wheeled tank ST-1 installed all the existing weapons.

Home weapon New Chinese armored vehicles - rifled gun caliber 105 mm. The gun is equipped with an ejector and a muzzle brake. Apparently, it is equipped with a two-plane stabilizer. The shape of the tower may indicate that the ammunition (or part thereof) is loaded into the stowage located in the aft niche. Probably, the ST-1 does not have an automatic loader, which is why the preparation of the gun for the shot is the responsibility of one of the crew members.

The driver, gunner and commander have a set of optical instruments for observing the battlefield. The gunner has a periscope sight, with a night channel and a laser rangefinder, to search for targets and aim the gun. On the commander's hatch, located on the roof of the tower at the left side, there is a certain observation device, the type and class of which is unknown. Perhaps the new wheeled tank is equipped with a panoramic commander sight.

The exact characteristics of the new Chinese wheeled tank have not yet been published. The export nature of the development suggests that such information will be made available to the public in the very near future. In the meantime, you can build assumptions about the characteristics and capabilities of the new ST-1 machine. Probably, in terms of its capabilities, the ST-1 wheeled tank is somewhat similar to the older ZTL-09, some of the details of which are already known.

Like many other Chinese developments, the ST-1 wheeled tank is intended for deliveries to small countries in Asia, Africa and South America. For example, this machine may be of interest to the Venezuelan armed forces, which in the year 2012 acquired several dozen export-equipped ZBL-09 armored personnel carriers. The wheeled tank originally offered for deliveries to foreign countries may be of interest to a country that is already using an armored personnel carrier, which has become the basis for it.

Information on future contracts for the supply of the ST-1 wheeled tank is not yet available. However, it should be borne in mind that the first information about it was published only in September of this year and potential customers have not yet had time to begin negotiations, and even less to sign contracts for the supply of equipment. Who exactly will be interested in ST-1 and order these machines - time will tell.