Weapons are prohibited. Part of 1. Napalm

November 12, 2014
38
Many Soviet citizens found out what napalm is only in the 1960s, watching television reports from warring Vietnam. Affected people, terrible burns, dead children, burning settlements caused just indignation of citizens. Even aviation the blow, which was shot from afar, looked terrible. Over the Vietnamese jungle, Phantoms or Skyhawks entered the combat course, at some point in time a large cigar-shaped tank, which looked like a fuel tank, was separated from their belly. Then this tank randomly somersaulted in the sky until it touched the ground. At that moment he burst and a whole sea of ​​fire spread from it, from which it was impossible to escape.

Napalm was banned on the basis of a document that entered into force on December 2 1983 of the year.

As of January 2012, this document was ratified by 99 countries of the world, including Russia.

The subject of the ban on the 3 Protocol was the use of napalm and other types of incendiary weapons against civilians. 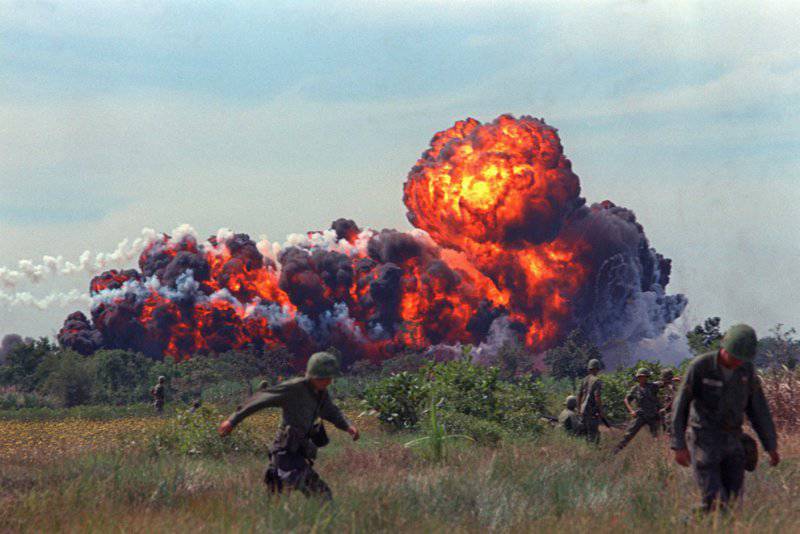 Gasoline as a fuel has a very high energy density - just one filled beer bottle is enough for a vehicle weighing more than 1 tons to drive 5, or even more kilometers. However, if you splash it on thick wet logs, the fire will flare up, but you may not be able to make a fire. The fire will quickly calm down. As incendiary means just gasoline was not good. Napalm, which is a gasoline (sometimes a different type of fuel), combined with a thickener, as well as a variety of additives, the main purpose of which is to increase the temperature of combustion of the mixture, became an ideal tool.

The resulting mixture is able to adhere to various surfaces, even vertically arranged, and it burns much longer than regular gasoline. Napalm as a weapon was invented by the Americans during the Second World War. Initially, they used natural rubber as a thickener for the mixture. But since Southeast Asia (the main producer of Hevea juice) was occupied by Japan, he had to look for a replacement.

The word "napalm" is not by chance reminiscent of the word "palm". Instead of rubber, it was decided to use a mixture based on aluminum salts of fatty acids - naphthenic and palmitic. These salts have a texture that is similar to soap. Palmitic acid was once isolated by scientists from coconut oil, which grows on palm trees (hence the name). The word napalm also became derived from the first two syllables of the names of the acids used. 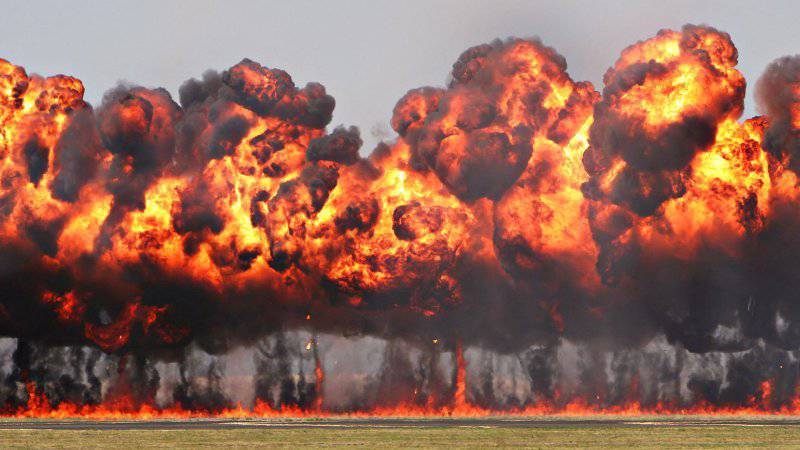 Napalm was first created at 1942-43 at Harvard University, with Professor Louis F. Fizer as the leader of this project. The professor and his colleagues were mixing the powder of fatty acid salts with gasoline, after which the mixture turned into a sticky and viscous liquid, which had a brown color.

For the first time in combat conditions, a new weapon was tested on 17 on July 1944 of the year when an air strike was launched against German fuel depots located near the city of Coutances (France). After that, the novelty was tested in another theater of military operations - in the Pacific against the Japanese troops. Napalm was used to smoke Japanese soldiers from dugouts and pillboxes in the occupied islands. Napalm was used during the bombardment of the German city of Dresden, which was marked by special brutality, which occurred in February 1945: the unbearable heat in the old city, which was burnt with fires, literally melted people's bodies.

However, after the end of the Second World War, the recipe for napalm significantly changed. After the end of the conflict in Korea in the interests of the American army, a new species was created - napalm-B In this type of napalm, palmitic acid is no longer used. The new fire mix on 33% consisted of gasoline, on 21% of benzene and on 46% of polystyrene. The new weapon was much stronger than the previous one. Napalm B burned significantly longer - not 15-30 seconds, but up to 10 minutes. It was almost impossible to remove it from the skin; at the same time, during burning, it not only burned through it, but also caused terrible pain to the person (the burning temperature was 800-1200 degrees Celsius). At the same time, in the process of burning, napalm was very active in emitting carbon monoxide and carbon dioxide, burning out all the oxygen in the area, which made it possible to hit enemy soldiers who were able to hide in dugouts, bunkers, and caves. These unfortunates died from suffocation and terrible heat. 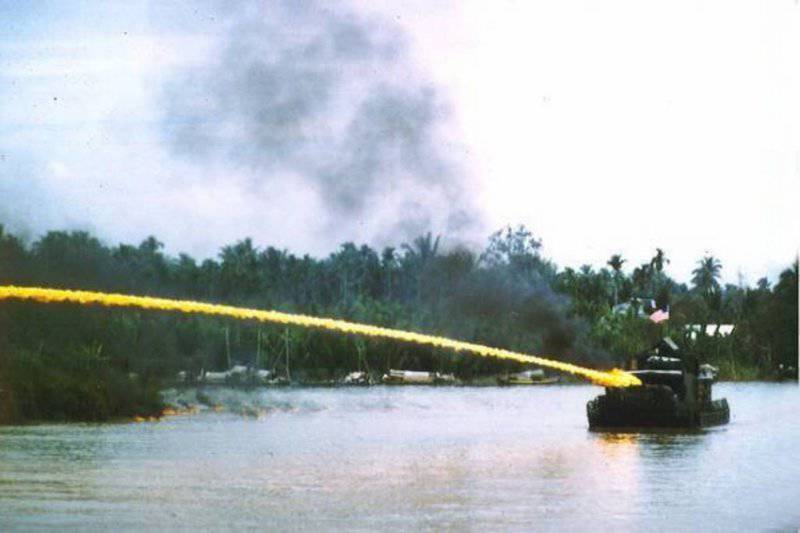 Napalm was widely used in traditional ammunition: aerial bombs, artillery shells, mines, hand grenades, mechanized and wearable (backpack) flamethrowers, incendiary cartridges. Napalm was used to destroy enemy personnel and equipment, and to create fires. It was widely used in many conflicts of the 20th century, beginning with the Second World War. It was used by American aircraft in Korea in the 1950-1953 years and was especially widespread during the Vietnam War in the 1964-1973 years, it was also used by the Turkish army to suppress Kurdish uprisings.

In Vietnam, against the Viet Cong (National Front for the Liberation of the Country), the American army widely used practically its entire arsenal of weapons of destruction, with the exception of nuclear weapons only. At the same time, napalm itself could be attributed to weapons of mass destruction. For napalm it was completely indifferent how many living creatures are in the zone of its defeat, he is ready to burn everything he gets. Understanding this, the UN adopted a document that prohibited the use of napalm. The use of incendiary weapons was officially recognized as a barbaric method of warfare.

Although gasoline was commonly used as a liquid fuel in napalm production, its color could be different. It depended on the fuel grade and thickener used, varying from completely colorless or clear liquid to brown or pink. All napalm mixtures were very flammable and burned, creating a temperature up to 1200 degrees Celsius at the time of burning (the calorific value reached 10 000 kcal / kg). The rate at which the mixture burned out was largely dependent on the thickener used and the degree of thickening. The density of most mixtures reached 0,8-0,9 g / cm3. When added to the mixture of light metals (magnesium, sodium) or phosphorus, it was possible to obtain "supernapalm". This type of napalm is most actively ignited on wet surfaces, as well as on snow (that is, it was especially effective in the humid jungle or in northern countries, for example, Russia). 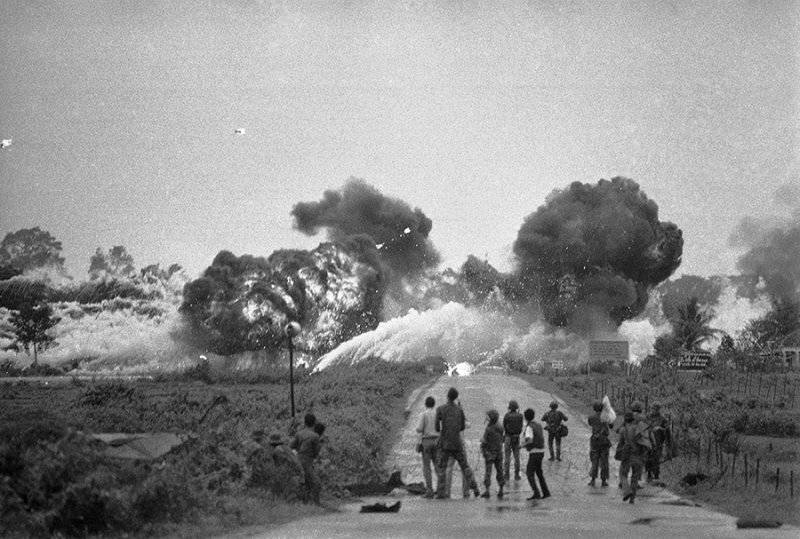 Napalm is very flammable, but it burns slowly (some bunches continue to burn for up to 10 minutes). At the same time, the highest burning temperature in 800-1200 degrees is reached in the first minute, and then gradually decreases. The burning rate of napalm mixtures can be adjusted using additives in the form of wood flour, asphalt, and various resins. At the same time, the effect of the use of napalm was impossible to predict, since the damaging effect of the mixture was spread in an uncontrolled manner. There are a huge number of cases when innocent civilians suffered from the use of napalm.

Due to the huge combustion temperature, this substance simply burned all the oxygen within a radius of several meters from the fire. In addition, the use of napalm led to suffocation, which occurred in people from toxic products formed during its combustion, for example, carbon monoxide. All this posed a serious threat even to people who were in shelters at the time of the strike. Since napalm is lighter than water, it does not sink, floating on its surface, and is not extinguished by water. If only 1 gram of napalm gets on human skin, it can cause very severe damage. Napalm has an extremely strong moral and psychological effect on people, suppressing their ability to offer active resistance. The fact that the infantry is afraid of fire was established during the First World War. The infantrymen could stoically wait for artillery shelling and bombing, but the use of flamethrowers often terrified them.

Taking into account the strong damaging effect and uncontrolled spread of the flame, the 1983 Protocol (on the prohibition or restriction of the use of incendiary weapons) was adopted in 3, which was an addition to the signed UN Convention on the prohibition or restriction of the use of specific conventional weapons. This protocol outlawed napalm. But not all countries have signed the document. It was signed by a little less than 100 states, while the USA accepted the protocol with reservation, reserving the right to use incendiary weapons during attacks of military facilities located among “congregations of civilians”, if such attacks would entail minimal human casualties. As a result, everything depends on the definition of which sacrifices can be considered minimal. It is worth noting that some former Soviet republics did not join the protocol either. So, after the collapse of the USSR, the 4 protocol of the former republics did not sign the protocol: Azerbaijan, Armenia, Kazakhstan, and Kyrgyzstan.