The second life of BRDM. Scouts on "civilian." Part Seven

November 13, 2014
24
Dear readers! This is the seventh and final part of a review dedicated to the civilian versions of the BRDM-2.

I am completing a series of articles with a review of the brightest and most memorable version of the BRDM, modernized in the Russian specialized campaign “Perspective” from St. Petersburg.

The car was created in 2012 year. The customer owns a red Ferrari car, so he asked his BRDM to paint the same color.

The conveyor is used for corporate nature trips and various exhibitions: I participated in the all-terrain vehicle exhibition in Lenexpo and at the opening of the Ferrari and Maserati season in 2013. Spectacular appearance attracts looks and brings popularity in social networks. The car is periodically subjected to modifications and comes to us for routine maintenance.

I was looking for a military armored car. Bribed the opportunity to drive around the city, the variation in tuning, ease of management (as on the GAZ-66). When designing the top add-in, I asked to pay attention to three main points: 1) the style of the armored car should be preserved; 2) durability and safety with the possibility of turning over or a fallen tree; 3) to provide free access to the salon, i.e. convenience of access to the salon and the possibility of quick evacuation from different parts of the cabin. 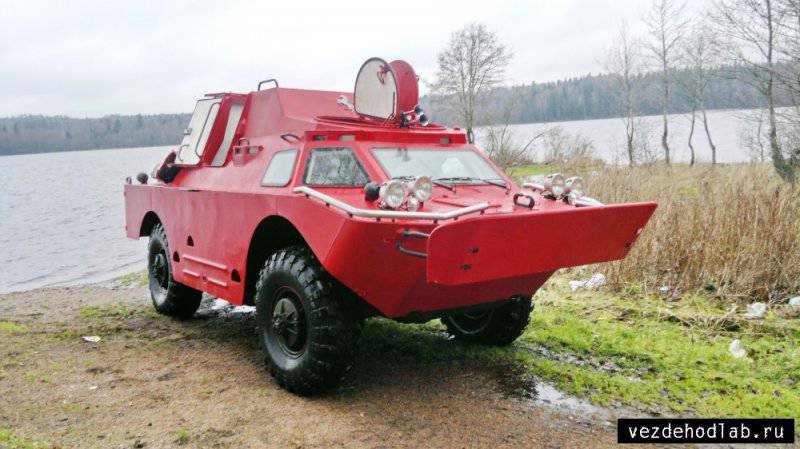 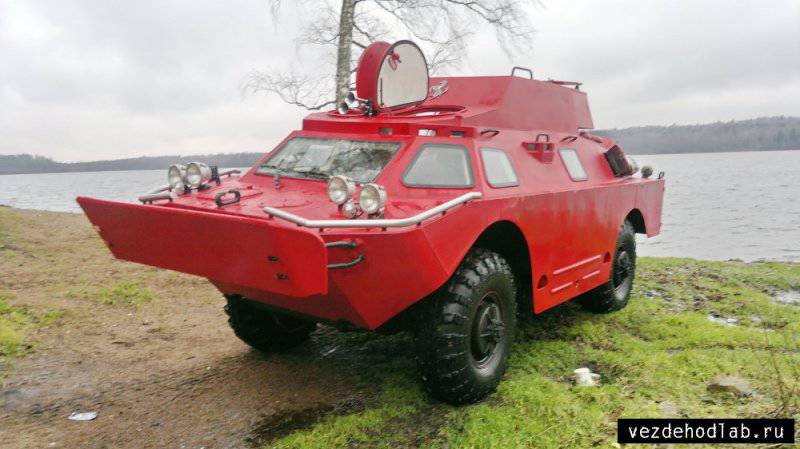 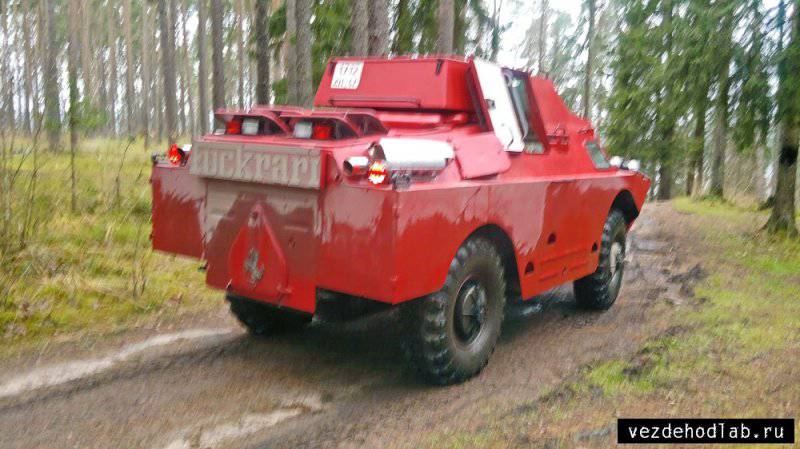 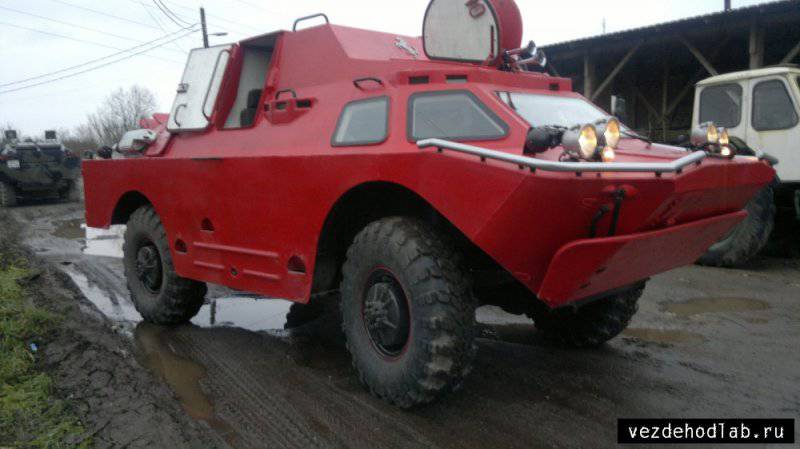 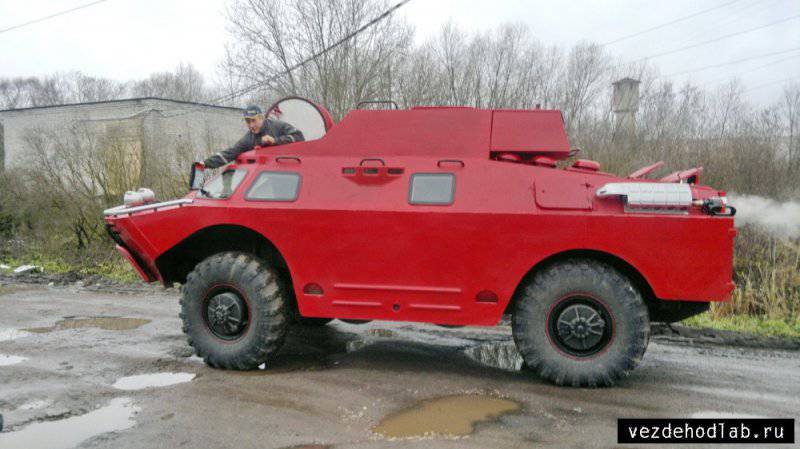 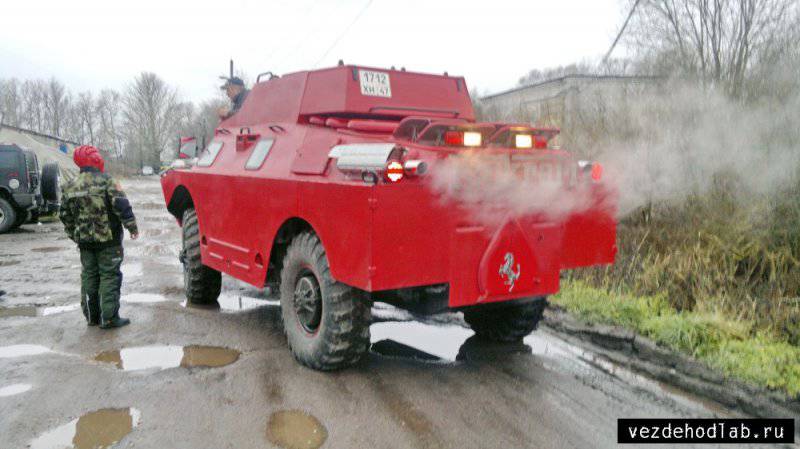 Everything should be harmonious. The red headset is in tune ...

When constructing the superstructure, the angles of inclination of the planes used by the manufacturer were preserved, which gave the integrity of the overall design. Strength characteristics were achieved by using metal 4 mm thick, as well as an associated frame made of powerful profiles. All welded work was carried out only by professional equipment. Cutting metal - powerful plasma cutter, welding - three-phase semi-automatic. Free access was provided by installing two regular front hatches, one rear side door and two rear upper hatches. Moreover, the side door and two rear hatches form one common opening. 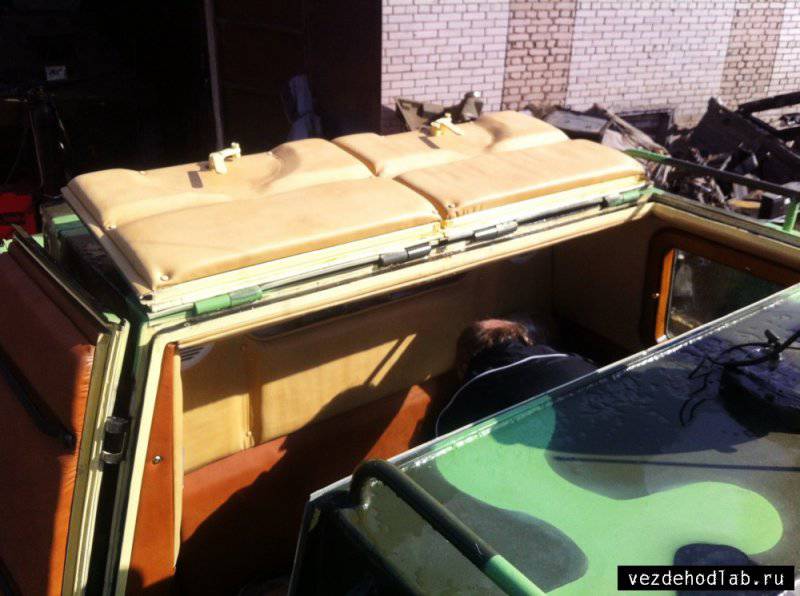 The photo of the hatches on the BRDM-2 Fuckrari could not be found at the required angle, therefore I am attaching an image of identical hatches on another machine (the Kirishi project).

This design is especially convenient when traveling by water. It allows you to stand several passengers in the doorway, watching what is happening outside the car, and without interference get out of the car quickly.

The glazing on the car is made by the inner lining, which especially affects the strength of the glass (the glue works as a shock absorber), and also the appearance benefits.

Made a complete insulation of the crew compartment, the interior is soft and leather trim. Seats borrowed from foreign cars, covered in interior color. 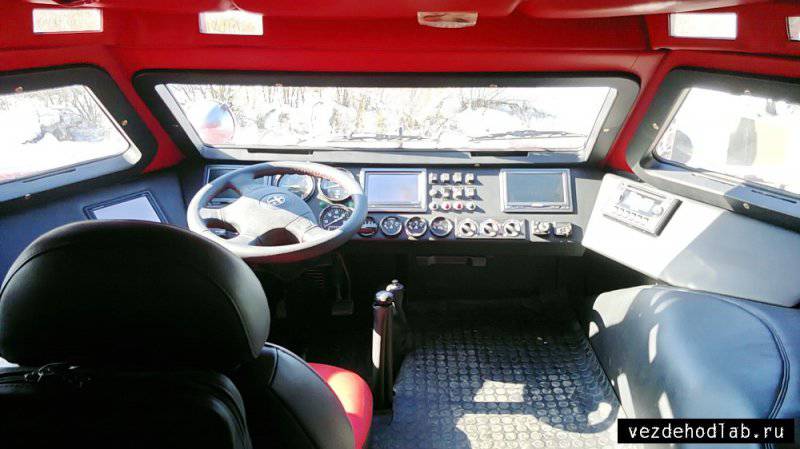 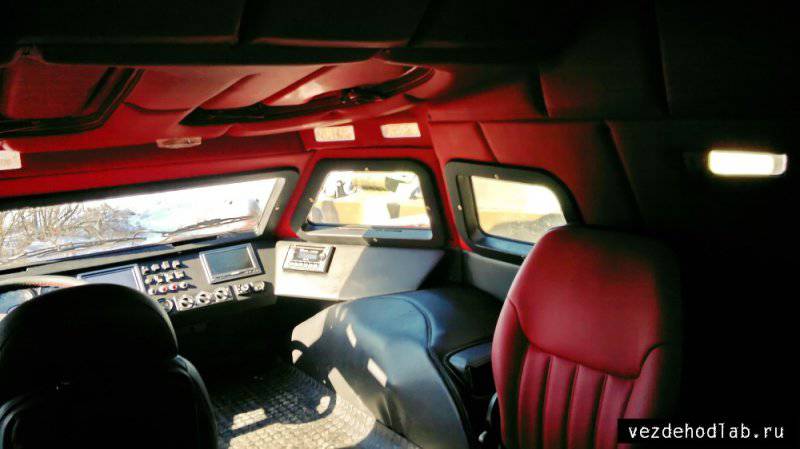 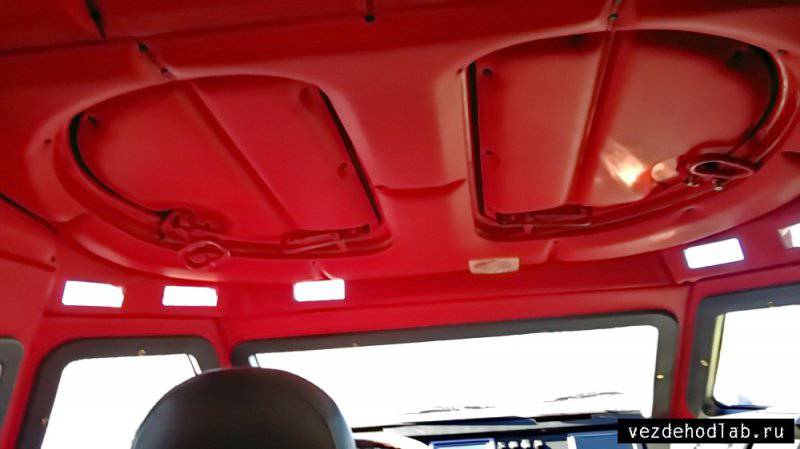 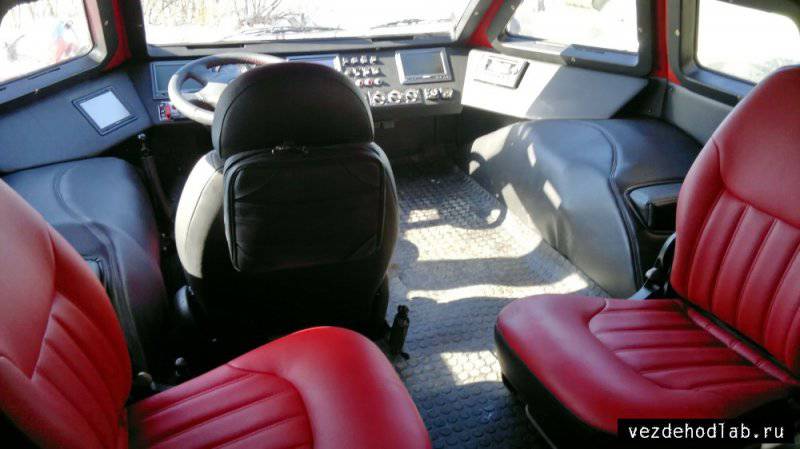 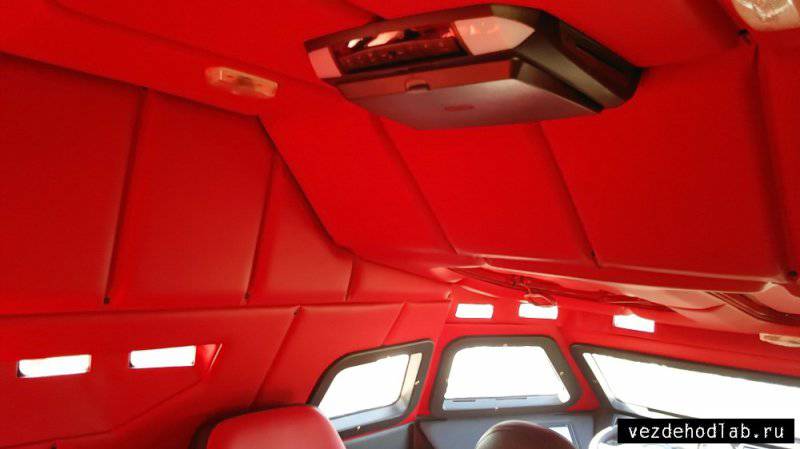 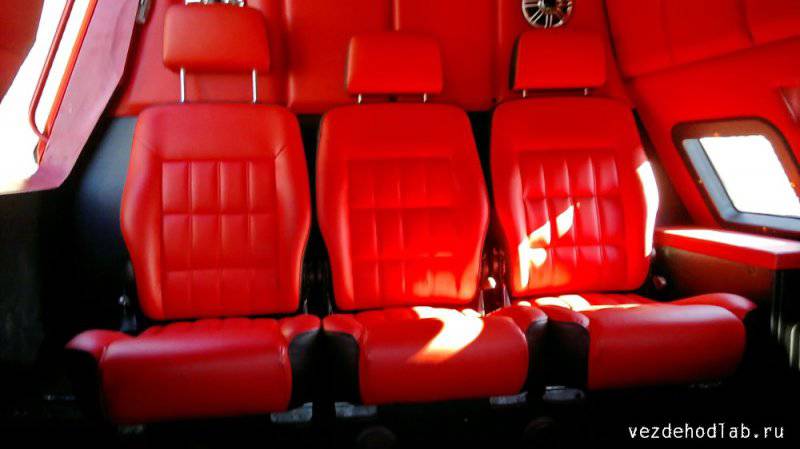 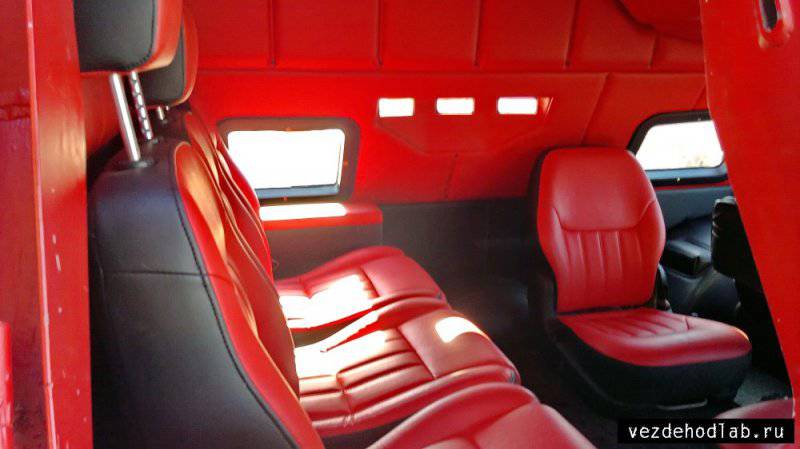 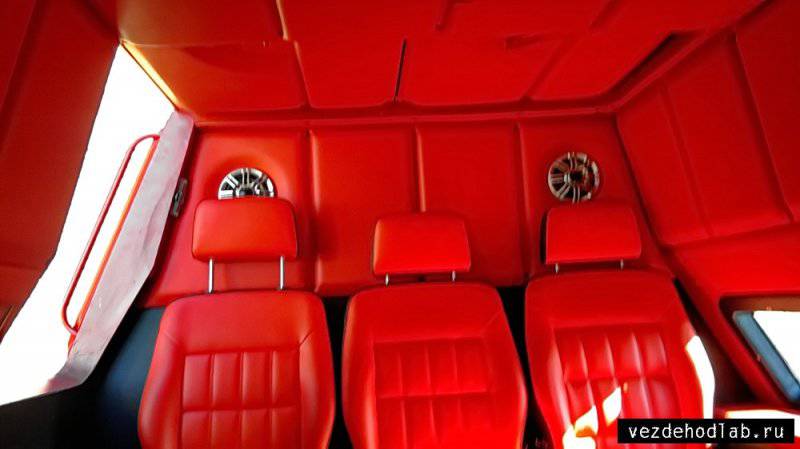 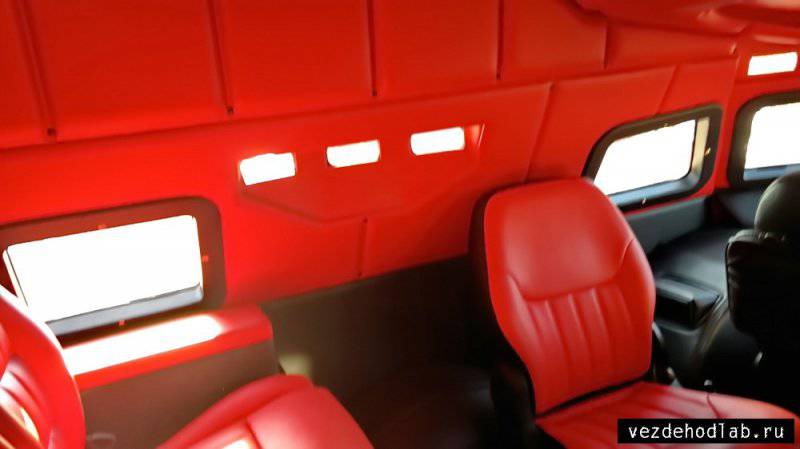 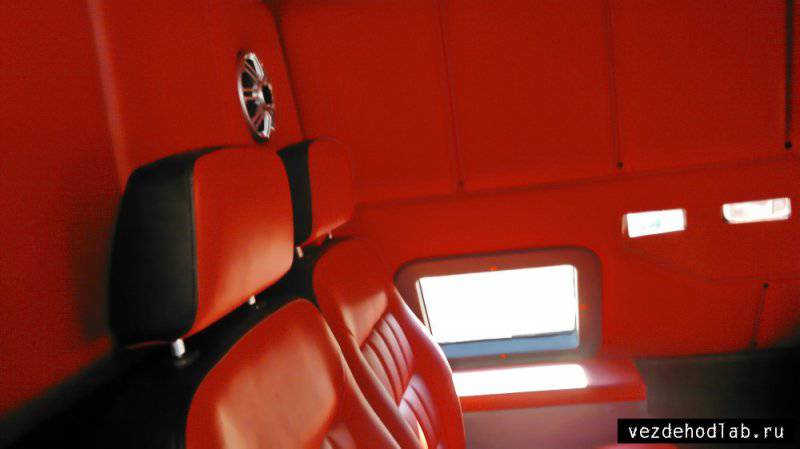 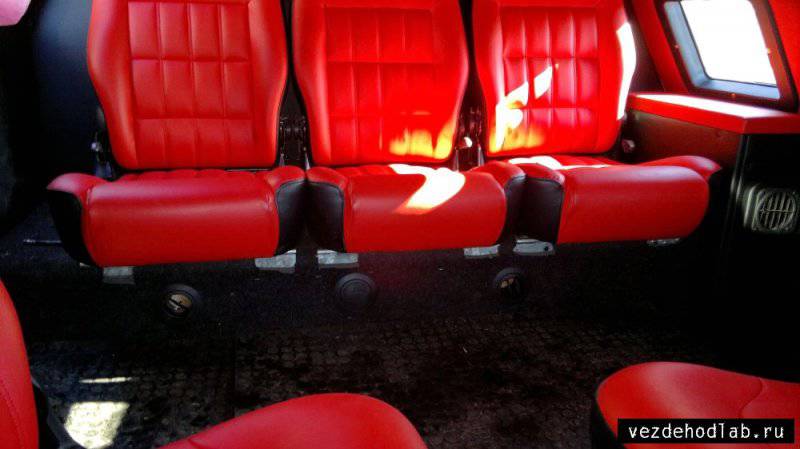 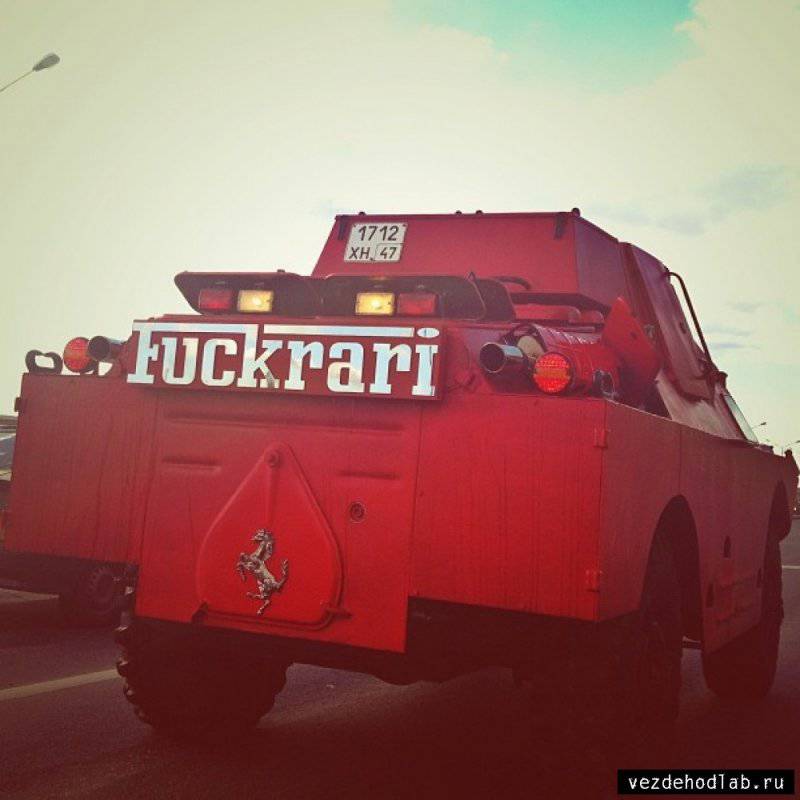 There are no mirrors on the car, but there are rear and side views cameras, each of which corresponds to its monitor in the cabin.

Order and such. Who worked on the revision and who is the customer is unknown. No comments… 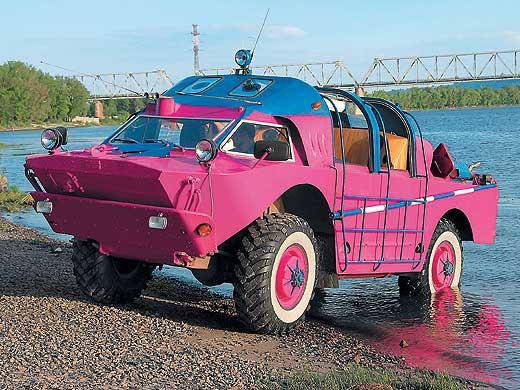 At the end of the review - a bit of humor on the topic “How is a tank useful in a household?”

If you have a tank, armored personnel carrier or some other armored vehicle, then many “car” problems will cease to be problems for you. Of course, you will have to tinker with the paperwork, remove armament, etc., but then you get a whole bunch of indisputable advantages. Judge for yourself!

Of course, armored vehicles need more space than, say, for the Oka. But think for yourself - who will risk “backing up” the T-70 or the BTR-80? The penalty area for improper parking does not threaten you either - where have you seen a tow truck of suitable carrying capacity?

It is unlikely that anyone will risk you “undercut” or, in the case of misunderstandings, prove something to you with the help of sports or repair equipment.

You can safely withstand any collision, even a frontal, with anything. Anything smaller than an elephant or a career vehicle can simply be ignored.

In addition, it is difficult to imagine a mentally normal car thief who would risk stealing a tank (provided that he knows how to drive at least a tractor). A tank is simply not able to "disperse", you can not take a caterpillar or pierce it. And any "scratches" studs, etc. meaningless. The price of the issue is any paint, brush and 2 minutes of time.

Given the state of our country and rural roads, armored vehicles are out of competition. Advertized SUVs nervously smoking in aside! Here and paint nothing.

The weight of the removed weapons and ammunition is more than the picket fence and two bags of potatoes that you are going to take to the cottage.

Well, here we need to work ... Get plenty of pillows for yourself, a helmet with a sound insulation - and everything is in your hands! In addition, it can be turned into a plus. If your wife or mother-in-law are used to commenting on all your actions behind the wheel, all you need to do is give them helmets without a laryngo phone, and then if you don’t be quiet, then peace of mind is surely guaranteed to you! Not every average mother-in-law is capable of pereorat tank diesel.

And so that you do not have the opinion that the driver of the armored vehicle can do everything - I attach a curious note.

On the streets of Cherepovets, the second BRDM-2 was detained. The traffic police of the Vologda region faced an unusual situation: they stopped right in the center of Cherepovets ... a real armored car!

The inspectors noticed an armored reconnaissance and patrol vehicle (BRDM-2) yesterday around ten in the evening when it was moving along Mira Street. Employees of the district department of traffic police near the restaurant “Munich beer” stopped special vehicles. 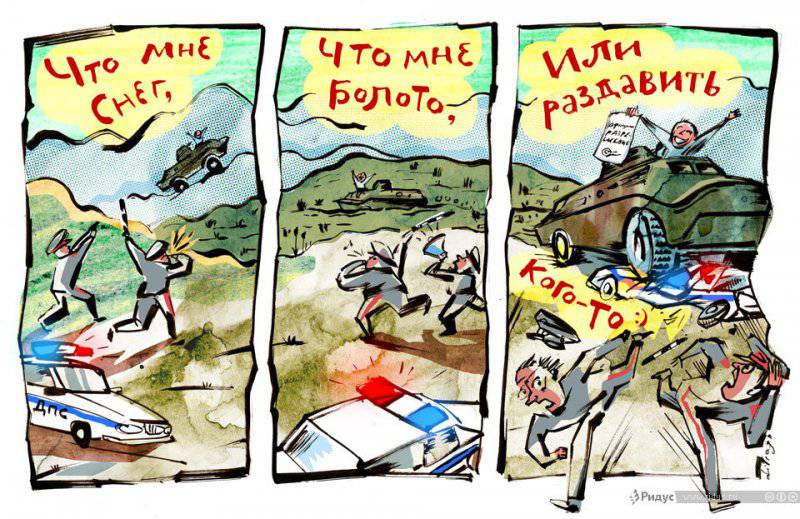 When checking the documents, the driver presented an identity of the tractor driver, but there was no category in it that is required to manage such transport. The armored car was placed on a special parking until further notice.

As Sergey Malinovsky, the head of the regional traffic police department, explained to cherinfo.ru, the military vehicle is officially registered as a snow and dredging vehicle, the old numbers have been shot down, their attachment points have been trimmed with a grinder. The rights to control the “fighting” snow and swamp-going vehicle were absent from both the driver and the owner of the car, who was sitting nearby.

Driving such a vehicle requires category A-3 licenses. And so - the car is registered quite officially, at least, the rest of the documents in order.
In this situation, the Ministry of Defense is surprised, which implements this technique.
People somehow buy, make the appropriate changes: cut down the numbers, register as a usual means of transportation, and - drive ... Our inspectors were surprised at first by the car’s unusual appearance on city streets, and when they stopped, there wasn’t even a right, another person with rights Could not provide - here and sent to the parking lot. If the owner at least tomorrow will provide all the required documents, we will be forced to release this “snow and swamp-going vehicle”.
The head of the district department of traffic police Sergey Malinovsky.

According to the head of the traffic police department in the Cherepovets district, this is the second time that military equipment has been re-drawn up as a civilian, which district inspectors encounter.

In Cherepovets itself, in 2012, the BRDM was also detained: its driver was drunk and went from Irdomatka early in the morning to a restaurant on Pushkinskaya Street.

Just like in the joke about the cops. One tells the other bike:
“And then we drank more“ forfeits ”and braked the BTR ...”