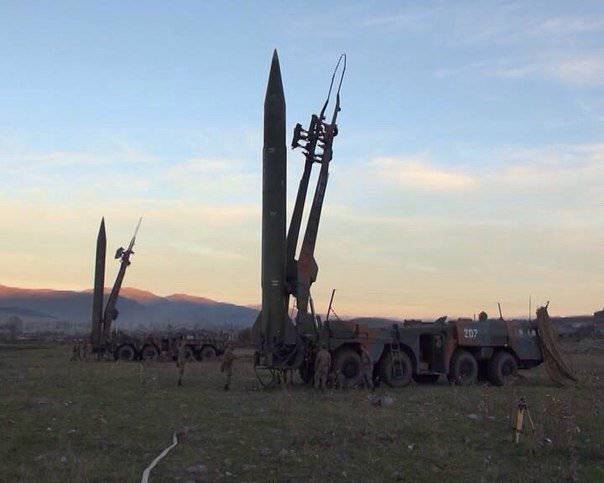 The 2014 Unity exercises held in Armenia have become unprecedented in modern stories of this republic and Nagorno-Karabakh (since 1991 year). In fact, in the shortest possible time 70-80% of the personnel of the Armed Forces of Armenia and the NKR Defense Army were sent to the test sites in full combat readiness (47 thousands of soldiers participate in the exercises, 2-60 thousands of military personnel participate in the exercises).

The amount of military equipment used in the exercises is also surprising. A total of RA Armed Forces and the NKR Defense Army were sent to training battle over 2000 artillery shells (probably recorded and light mortars), 850 armored vehicles, 450 units of various air defense systems (MANPADS, anti-aircraft artillery, air defense missile system), more than 1500 antitank weapons, to 5000 units special and automotive vehicles. So what can you learn and what conclusions to make by analyzing information about the passing exercises?

Very few countries can afford to take and send 80% personnel and almost all the equipment to the exercises. In this case, the secret lies in the fact that the Armed Forces of Armenia and the NKR Joint Stock Company are always and in full force on alert, without requiring time and additional funds for deployment. In fact, the army is constantly in the same condition as it should be during a large-scale war. An interesting comparison - the largest exercises in the history of the Russian Federation (from 1991 of the year) were held in 2013, 160 thousands of servicemen took part in them - about 20% of the personnel of the Russian Armed Forces. In Azerbaijan, exercises with such a high percentage of involvement of personnel were not conducted either.

2) The discrepancy between the officially declared quantities of military equipment and real numbers.

It has long been known that Armenia and NKR are actively buying military equipment in the Russian Federation at Russian domestic prices, but this is almost not reflected in official reports. And if the number of equipment put up for teaching by Armenia corresponds to the general concepts, then the equipment of the Nagorno Karabakh Republic is much higher than what was previously considered. In fact, it is confirmed that all the “surplus” equipment goes straight to Nagorno-Karabakh.

Based on the data provided by the press service of the NKR Joint-Stock Company, it is possible to draw conclusions about the minimum amount of equipment available in the unrecognized republic:

600 units of armored vehicles - mainly represented tanks T-72B and BMP-1 and 2. Armored personnel carriers in the NKR AO and the Armed Forces of Armenia are rarely used, since tracked infantry fighting vehicles have better cross-country ability, as well as armor.

3) The next dispelling of the myth that only Azerbaijan is actively arming.

Of course, Baku spends much more money than Yerevan and Stepanakert and buys, in general, more modern weapons. However, this does not mean that Armenians "sit back" and do nothing - over the years, a huge saturation of the troops in Karabakh with military equipment was created. Some interesting figures on this topic: about 75 military personnel of the JSC NKR approximately one tank. For the Russian Federation, this figure is approximately 266, for the United States approximately 260, for Azerbaijan 155. It is also interesting that the armed forces of Armenia and the NKR joint-stock company have a noticeable advantage over Azerbaijan in operational-tactical missile complexes. Yerevan and Stepanakert have at their disposal 8 minimum of the Tochka-U PTRK launchers (they all participate in the exercises) and 8 PU of the R-17 “Scud-B” ballistic missiles (the range in 300km allows reaching almost any point in Azerbaijan), and Baku has 4 PU Point-U and a small number of Israeli MLRS LYNX, with the ability to use the OTRK Extra.