Germany: It's a shame to be a banana republic 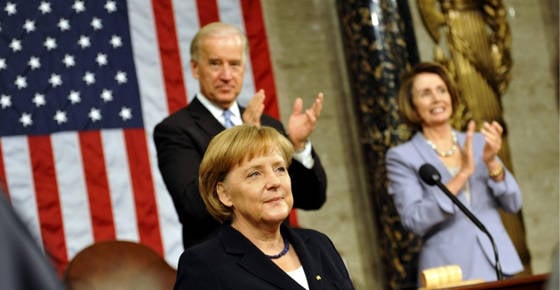 Germany is a country of advanced Western democracy, and the media here have long been marching in peace, beating together a step on the command of a senior political corporal. Therefore, the program titled “Banana Republic?” On the Frontal 21 program of the German federal channel ZDF has become a very unusual phenomenon against the background of the general service consensus of the German media.

The editors of the program received materials from the anonymous sender, which pushed them to a journalistic investigation. The mechanism of the organization by the Americans of the secret and total control of all communication systems in Germany was revealed. From the materials it followed that Germany is a completely dependent banana republic, not only different from many other US vassals.

Only for the period 2011-2012. The German Foreign Ministry issued a license to 111 US firms to conduct intelligence activities from the United States. Outwardly, it looks quite respectable. Firms are listed as commercial organizations, but they are not engaged in ordinary commerce. So, they are allowed to conduct "analytical work in contact with the US armed forces in Germany." Suffice it to say that among these firms is Booz Allen Hamilton, where Edward Snowden previously worked, representing the interests of the NSA there.

These are contracting firms located on the territory of US military bases in Germany. They connect to German communication systems and intercept data from all types of information flows. Firms control social networks, e-mail and electronic telephony in the territory of the Federal Republic of Germany and beyond its borders, then transmit the received and filtered information to the NSA.

The cumulative annual budget - 70 billion dollars indicates the scope of these firms.

What information is interested in American spies in Germany?

For example, California-based Leonie Industries LLC, based on the Africa-Commando in Stuttgart, participates in the Prism program, which E. Snowden told in detail. This program identifies "enemies of America" ​​in dozens of parameters, regardless of where they live and what position they occupy.

The company NETZWERK ANALYTIKER identifies suspected terrorists all over the world, including in Germany. About the same do the rest.

There is no question of any legal regulation of the work of these firms. They freely filter all streams of information passing through German communication networks.

Andreas Fischer-Lescano, a law professor from Bremen, says that such activities are contrary to international law and the laws of the Federal Republic of Germany, and the federal government that authorizes it is responsible for this. “It is a scandal that such“ analysts ”collect data to identify“ target persons ”. Such information can be the basis for targeted killings. This is a clear violation of international law, ”says the professor.

Representatives of the US Army in Germany have bypassed the outbreak of scandal silence. When the Frontal 21 journalists tried to interview the official representatives of the American army, they did it the way journalists of banana republics always do, they refused to speak, they were forbidden to turn on the cameras. However, the head of the German counterintelligence BFF Hans-Georg Maasen had to answer questions. “I see no signs that these firms in Germany are acting against German interests,” he said.

This statement was not satisfied with the journalists, because the head of the BFF was not able to answer how this activity relates to the federal law on the protection of personal data. In addition to the disclosures of E. Snowden, who showed that every German, including the Federal Chancellor, was under the Big Brother magnifying glass, it now became clear that all this was happening with the permission of the federal government itself.

Such a turn was unexpected. After all, quite recently the German government tried to publicly protest against the "total espionage" of the American partners and even pretended that it could quarrel with Washington. Washington, however, did not notice this storm in a glass of water, but ordinary citizens supported their government. It turns out that they were in vain. The government protested only against listening to himself. But total control over the citizens of Germany, it has long allowed.

You need to know the peculiarities of the internal political life of Germany, to understand what a scandal. At one time, the Germans, imagining themselves leaders of European democracy, proudly and with dignity for over four decades created a system of laws protecting private information. It was like a ritual in which a new, proud German mentality was forged: we are all right, we are an example for the rest of the world.

Germany’s first law on the protection of personal data was adopted in Hesse back in 1970. Prior to this, there were no such laws anywhere in the world.

It was followed by the adoption of the Federal Personal Data Protection Act in 1977, which was revised in 1990. The main purpose of this law is “to protect an individual from encroachment on the inviolability of his private life by manipulating his personal data”. The law applies to the collection, processing and use of personal data collected by state federal agencies (in the absence of government regulatory mechanisms) and non-state institutions, if they process and use personal data for commercial or professional purposes. All Germany's 16 lands have their own personal data protection laws, which apply to the public sector of land management. There is a federal commission for the protection of personal data, which is responsible for the implementation of the law. There are corresponding commissions ensuring the enforcement of local laws on the protection of personal data in each German state.

In April, 1998, after six years of fierce political debate, the German parliament, by a majority of two-thirds, approved an amendment to Article 13 of the Constitution, allowing the police to install listening devices even in private homes (if there is a court order). In addition, almost all German laws that affect the problem of handling personal data of individuals contain either references to the relevant law on the protection of personal data, or special provisions on the rules for the treatment of personal data, reflecting the right to privacy. Recently, a number of laws relating to the inviolability of communication exchanges have been passed. A decree on the protection of personal data transmitted over telecommunications channels, adopted in 1996, protects the integrity of relevant information. The Law "On Information and Communication (Multimedia) Services" 1997 of the year establishes mechanisms for the protection of information transmitted over computer networks. The same law determines the requirements for digital signatures.

As it now turns out, this whole magnificent system of “protecting the constitutional rights of German citizens to privacy” is in fact nothing more than a mocking ridicule. There is no reason for the Germans to be proud of their security! Their government, along with the American chefs, wanted to spit on the whole system of German laws, on the federal commission for the protection of personal data, on all 16 similar land commissions and even more on the need to obtain a court warrant!

The long and carefully constructed building of the rule of law turned out to be just a cardboard facade, under which completely different morals reign. Every German is under a microscope someone else's intelligence. For every German, this service keeps records and it is ridiculous because in Germany they have piled up such a bunch of useless laws. Where America rules, there is only one law - the law of the pack.

From the point of view of a burgher sincerely believing in the whiteness of the clothes of German democracy, this is a catastrophe. It took so long to be proud of being a member of German advanced democracy, so that at one moment you could feel yourself as an inhabitant of a banana republic!

Naturally, the scandal tried to hush up. Despite the fact that the transmission went through the central channel of ZDF, other channels did not pick it up when they heard the command “become one line!”. Today materials can be found only in social networks.

Now in Germany, few people do not understand what is happening. German businessmen regard Angela Merkel’s aggressive position on the Ukrainian issue as surrender of their own positions under the pressure of “Big Brother”. Today, “a step to the right, a step to the left” is regarded as an escape from the American “team”, and this has severe consequences. The times of G. Kohl and G. Schroeder, who were protesting against the military adventures of Washington, are long gone.

In short, the scandal was hushed up. To allow discussion around the total control of Americans over the life of Germans is completely useless. However, as the events in Cologne show, law-abiding Germans are gradually approaching the point beyond which their law-abiding may fail. Social Partnership Society is falling apart at the seams, and this is a great merit of “Big Brother”.