November 11, 2014
20
The more time on the presidency Petro Poroshenko spends, the more critical arrows are issued in his address. At the same time, Poroshenko manages to ensure that his steps are literally criticized by all the political and near-political wings of modern Ukrainian really: from moderate centrists and leftists (and not all of them are sent by trash cans) to extreme radicals together with representatives of punitive battalions. 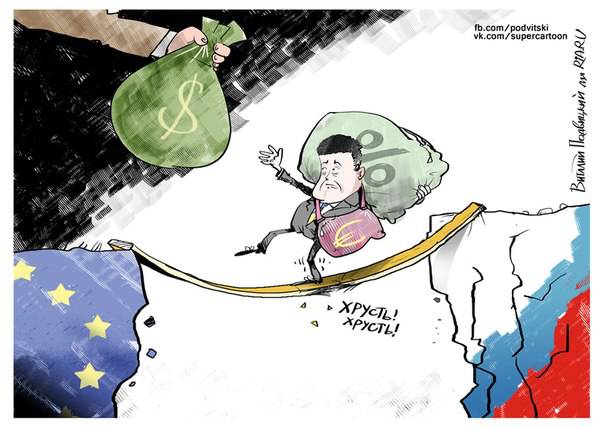 One of the reasons for the criticism of Petro Poroshenko introduced himself in Ukraine, after TASS, referring to the deputy head of Roshen-Russia, Oleg Kazakov, announced the full restoration of production at the Lipetsk confectionery factory, part of the candy and chocolate empire of the Ukrainian president.

Earlier in the press there was information that the President of Ukraine had already got rid of his “sweet” business, and a number of media outlets came out with materials saying that Petro Poroshenko allegedly sold his business to his son Viktor Yanukovych. Information about the sale of business is not officially confirmed. This gives reason to say that Poroshenko did not fulfill his election promises about the implementation of Roshen. In principle, Poroshenko has not fulfilled a single election promise, and Ukrainian citizens are increasingly beginning to pay attention to this fact. But, by and large, if the information that Roshen was sold to a company controlled by the family of Yanukovych was confirmed, then this too would not have added enthusiasm on the Square for obvious reasons.

The main claim to Poroshenko in Ukraine in this matter is not so much that he is still the largest shareholder of Roshen, but that one of the company's factories is located in the Russian Federation. And this claim looks like this: why Poroshenko admits that the taxes remaining from the factory’s activities in Russia fill the Russian treasury, from which “Donbass separatism is financed”.
Interestingly, in Russia, about the Roshen factory there are approximately the same claims, only regarding the fact that the fixed assets from product sales go to Poroshenko’s pocket, which continues the punitive operation in Novorossia.

Meanwhile, the Lipetsk branch of Roshen is working actively. The company managed to resume production after the company was forced to completely stop the power of 15 September, and then (two weeks later) work with low productivity, urging Russians to buy confectionery again, without paying attention to the policy.

From the other flank Poroshenko’s critics came the Maidan radicals, who in recent months have become representatives of punitive battalions. Another ultimatum to Poroshenko was noted by the Nazi volunteers. If earlier Poroshenko’s ultimatums were put forward by Yarosh and Co., now the militants of the territorial Donbass battalion, whose commander continues to call himself Mr. Semenchenko, decided to go the same way. Semenchenko himself claims that he was assigned an "outdoor advertising":

Remove outdoor advertising, which drags me for the last week. Do not disgrace.

And representatives of the battalion "Donbass", which refers to the Austrian media Contra Magazin, Petro Poroshenko is threatened with losing his chair if at least one city, which is now under the control of Ukrainian security officials and the so-called National Guard soldiers, is surrendered through his fault.

The Austrian edition comes out with an article entitled:
Far-right militia may overthrow Poroshenko.

Under the "militias" Austrian news the resource is understood by representatives of the Donbass battalion. At the same time, Contra Magazin reports that it is Poroshenko today who does not allow representatives of "volunteer" battalions to launch a large-scale offensive. True, the publication does not analyze how such an attack could end for punitive battalions, given the previous experience and the ability of punishers to fight exclusively with civilians ...
And in vain does not analyze. Indeed, in fact, the statements of the wards of Semenchenko in this context more closely resemble cheap populism, since if they have not completely dried up the gray matter in their heads (if present, of course ...), then these “gentlemen” should understand that it is their “large-scale offensive "On Novorossia and will be the main reason for the transfer of settlements controlled today by ukrosiloviki under the banners of Novorossiya Yes, by and large, this cowardly hundred and is not going to attack. Unless, to hammer from mortars and “Grads” from a respectful distance is yes, but it doesn’t converge in real confrontation ... No, in the latter case, Semenchenko usually reveals an “old wound” and he urgently with the allocated funds turns out to be in the Dnepropetrovsk hospital, leaving the fighters on the front line, but, nevertheless, receiving the next award "for peremog".

And this is without taking into account the criticism for cold batteries, melting pensions and wages, stopping production, lack of peace in the country, lustration of the most valuable scientific personnel and much more.

And Poroshenko himself, on whom his own countrymen are pressing on several sides, continues to build from himself the father of nations. The next “paternal” statement (now about the Berlin Wall and its fall) was published on Facebook by calling a person who calls himself President of Ukraine:

25 years ago the Berlin Wall fell, which became a symbol of the victory of democracy and the unification of Germany. An artificial barrier was destroyed, breaking the lives of people, families, and the country.
Today, the wall of defense of democracy passes along the border of Ukraine. I believe that the Ukrainian lands will also unite and will not allow Evil to divide Ukraine. We are strong, and we will win, because artificial walls between people sooner or later necessarily collapse.

Interestingly, this is said by a person who heads a state, whose head of government inspects the construction of the most delusional “wall” in stories modern civilization. As you can see, Poroshenko not only does not fulfill election promises, he also has serious problems with logic. “I will give a special status to Donbass” - “I will withdraw the signature”, “I will demand to buy coal at any price — I initiate the arrest of the Minister of Energy, who organized the purchase of coal abroad” ... Although the logic is not for Ukrainian presidents at all. Yanukovych will not let lie.

And Ukraine has long been controlled not by the head, but by something else. And here Yanukovych will not let lie ...