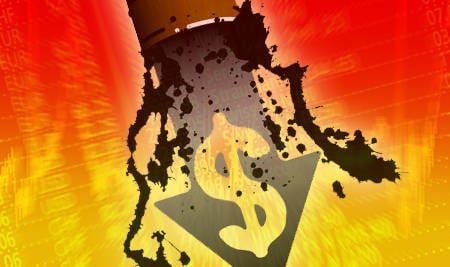 According to some reputable sources, OPEC is going to stop the decline in oil prices after reaching a minimum of seventy dollars per barrel. But why wait for the price in 70 dollars? It is believed that the Saudis decided to hold the low price for some time in order to strangle the "shale revolution" in the United States. Meanwhile, the price of black gold did not go down, but up!


In the influential edition "The Wall Street Journal" An article was published that sheds light on the minimum market expectations of OPEC countries.

The magazine reports that the measures taken to stabilize the oil price of the cartel’s participants will most likely be taken only if the price reaches the minimum in 70 dollars per barrel. This information is first-hand.

Some of the officials representing the twelve members of the Organization of Petroleum Exporting Countries informally met last week in Vienna on the eve of the OPEC meeting scheduled for November 27. They discussed the price of oil, which reached the lowest level, at least in the last four years.

The publication reminds that now oil prices have fallen by more than 25% compared with the summer of this year. Some of the OPEC members now fear the likely shortage of their state budgets.

Nevertheless, many of the members of the cartel openly stated that they are unlikely to become effective now, when the prices for Brent oil were established in the 80 area of ​​dollars per barrel. However, lowering the price to $ 70 per barrel will serve as a signal for action.

“With the price of 70 $ per barrel, OPEC will panic,” an unnamed OPEC official told the correspondent on the sidelines. “We’ve got used to living at 100 $ per barrel.”

Another official from the cartel confirmed that, with seventy dollars a barrel, OPEC would take action.

OPEC currently accounts for about a third of global crude oil sales. At a press conference in Vienna on Thursday, OPEC secretary general Abdullah Salem al-Badri said the cartel "is concerned, but does not panic"

As for the decline in prices, Mr. Al-Badri blamed market speculators for this. In Vienna, OPEC officials said they did not expect oil prices to fall below $ 75 per barrel in the short term.

At the November 27 meeting, “we will discuss all the mechanisms ... how to keep prices within 90-100 dollars per barrel,” said Pedro Merizalde, Minister of Non-Renewable Natural Resources of Ecuador.

Currently, despite the “increase in nervousness” in OPEC, none of the officials so far admits that on November 27 any decision would be taken to voluntarily restrict oil production. Now the cartel has set the “collective production ceiling” at 30 million barrels per day, although in practice this often exceeds the production limit. All together, OPEC members in September mined 30.700.000 barrels per day (data from the International Energy Agency).

Nevertheless, the American edition notes, the exporters' organization itself expects its production to fall in the medium term. The reason will be the increase in oil supplies in another region of the planet, namely in the United States (shale oil).

Since the cartel does not take any measures against price cuts, conjectures regarding the actions of the “main oilmen” (Saudis), directed not only against Russia, not against the USA, continue to multiply on the Internet. And not that against both!

We have already written to “VO” that the production of shale oil will become economically unjustified if the price falls below 80 dollars per barrel. Well-known US market analysts and oil production experts agree on this. The price in 70 dollars per barrel, which is talked about today in OPEC, will generally kill the expensive oil production in shale: its profitability will become negative. Production will be curtailed, companies in the mining states will throw people on the streets, B.H. Obama will finally turn gray.

Why does Saudi Arabia need this?

For competitive reasons. Riyadh does not want the United States to become its powerful competitor in the global market. Riyadh wants the “shale revolution” to be a thing of the past, as another unsuccessful project of the Bark Obama infamous era.

The explanation seems to be correct. But he has a number of major flaws.

First, Saudi Arabia is a regional ally of the United States, and Washington has contracted to provide security for Riyadh since the seventies (despite the complete absence of democracy there) in exchange for the latter’s agreement to sell crude oil for dollars only (and appeared four decades ago to light petrodollars).

Secondly, no one has yet succeeded in shitting the world hegemon like this. In addition to the USSR, of course, but the USSR on the world map is long gone.

Therefore, the version of the economic attack of Riyadh against Washington looks extremely dubious. Such a version is more likely to appeal to conspiracy theories than analysts who are accustomed to reasoning objectively.

There is another explanation. They say that the Saudis have conspired with the United States and decided to finally "overwhelm" Russia, which already has a hard time because of the sanctions. Once upon a time, the Soviet Union, through the price of black gold, was “poured”, and successfully, and now we will repeat this focus with Russia. With the very Russia, which lives mainly on the export of energy.

This version also does not hold the most simple criticism.

Why the Saudis, in collusion with the United States, bring down the price of oil to seventy dollars, if the American oil industry falls not so much Russian?

By the way, the Saudis impose their budget with the forecasted price of crude oil at eighty dollars per barrel. Not seventy. But not a hundred, as is done by other economists in Russia. A cautious Eastern approach to price suggests that Riyadh has studied the vagaries of the market well and long ago. But Russia, it seems, has floated in recent years on waves of euphoria caused by a very high oil price, and the fall in prices was an unpleasant surprise for the ministers.

Nevertheless, even pro-Western Russian analysts agree that the country's budget will withstand a low price for a couple of years (at 80 dollars per barrel). What happens next, no one says. At the present time, two years is a huge period for all sorts of forecasts.

Target price for oil, determined on 2015 year of the Ministry of Economic Development, is 100 dollars per barrel.

Optimistic, you will not say anything.

For example, Iran’s budget for next year is planned based on oil prices in 65-70 dollars per barrel.

With an oil price of about eighty dollars in the 2015 year and beyond, Russia has two options. A government that expects prices of at least one hundred dollars may cut federal spending (state programs). This option is, to put it mildly, unpopular. But about him in the government they said back in October.

Another option is to launch the “paw” into the funds of the Reserve Fund. The latter is formed just from oil revenues. Most likely, the "jug" will be printed. In late October, Finance Minister Anton Siluanov addressed to the State Duma deputies with a request to allow the Ministry of Finance in 2015, if necessary, to take from the Reserve Fund 500 billion rubles. The State Duma did not mind.

In the meantime, the point is, oil prices ... went up.

Growing oil exports will further increase demand. This was stated by the strategist "CMC Markets" in Sydney, Michael McCarthy, reports RIA News" with reference to Bloomberg.

“You can bet on the fact that, following the growing exports, demand will follow. Increased production is a matter of paramount importance to the market, ”the agency quoted a strategist.

RIA "News»Also notes that on November 10, world oil prices are rising during the bidding process. The reason for the growth is the increase in exports in China.

We will add in conclusion that the fluctuations in the world oil market depend on many components: here are the so-called psychological expectations, the speculators' game on the stock exchanges, and forecasts regarding the economic future of the new locomotive of the global economy - China, and the question of the likely decline in oil purchases by Germany (the EU engine ), and the activities of the OPEC cartel, and shale mining in the United States. Increased oil sales by Iraq and Iran also play a role. In addition, Libya has somewhat recovered in the oil trade. Even terrorists from the “Islamic State”, who sell crude oil at dumping prices - 25-50 dollars per barrel, made a bit of a drop in the price. To ignore all these factors and declare that the Saudis are playing alongside the United States, in order to "overwhelm" Russia, only a terry conspiracy therapist can.

Observed and commented on Oleg Chuvakin
- especially for topwar.ru
Ctrl Enter
Noticed oshЫbku Highlight text and press. Ctrl + Enter
We are
OPEC Summit: pricing jokesOil, Sechin, OPEC and November 27
61 comment
Information
Dear reader, to leave comments on the publication, you must to register.