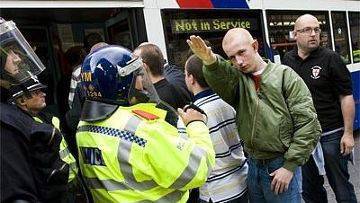 Say that the European states are waiting for a new wave of Nazi propaganda, so 55-60 years ago, it would be great to pay for such thoughts. Even in Italy and Germany, who showed the world to Mussolini and Hitler, thoughts about the revival of Nazism would have ridiculed. But time goes on, generations, leaders, ideals are replaced, and now the new Europe is not at all jarring the statements about the resurrection of Nazi ideas.


The recent events in Norway have served as a new impetus for the advancement of fascist slogans into the European arena. Anders Breivik, who committed the terrorist attack and massacre of his fellow citizens, is considered by many Europeans to be a champion of the “purity” of the European continent. Surprisingly, even some representatives of the authorities speak about the support of the ideas of the Norwegian terrorist. Thus, MEP Borgesio allowed himself to note that, despite many terrorist appeals, Breivik's fabrications are not without meaning.

This means that the European authorities themselves are in a strange situation: on the one hand, they should not forget about Europe’s tolerance and democratic principles, and on the other, try to resist the incredible flow of immigrants from Africa and Asia. According to analysts, every year the number of people illegally crossing the EU’s borders in order to stay permanently in a united Europe is growing by 8,8%. The largest number of immigrants is recorded in the British Isles, in France, Italy and Germany. If we continue to consider the immigrant issue on the European continent, then the largest number of visitors are Muslims. In London alone, according to the most modest estimates, there are about one and a half million Muslims, most of whom come from Pakistan, Afghanistan and Iraq.

This situation also dictates the response of the indigenous Europeans. Moreover, these actions are often simply spontaneous, because the counteraction against immigrant waves of such scale are not spelled out in any official European document. Therefore, it is precisely on the basis of unformed legislation (such words for the good old Europe sound, at least, strange) that numerous nationalist groups are uplifted, ready to wage a real war with those who are “billowing” in new Europe. In the same Britain, at the moment, several dozen extreme right-wing extremist groups have been recorded. Anders Breivik also corresponded with many of them, giving advice to skinhead friends about correct fighting on city streets, preparing explosive devices and other "useful" things for an ordinary terrorist.

The most striking thing is that ordinary European citizens are divided. Some, in general, are not opposed to “exorcising” the “Islamic invaders” from the primordially Christian lands. Others seem to be opposed to the dominance of immigrants in Europe, but the Nazi antics are categorically rejected. But such a split is a precedent. This means that in our time there will always be a sufficient number of “sympathizers” who, easily with the help of well-known racial slogans, can stand under Nazi banners and go where the newly appeared Führer will call them.

All this история already knew. Any thoughts on the topic of who is better - white or black, Christian or Muslim, Aryan or non-Aryan - boiled down to senseless slaughter, marching behind the heads of infidels and other accompanying "trophies." There were times when Islam tried to conquer Europe. This is the famous Arab invasion of the Iberian Peninsula, when they burned Christian churches and drove the population into slavery. There were times of crusades, when, under the banner of Christ, children and women of another faith were killed.

So is it not time for a balanced approach to the new world problem. New European laws have always stood on the protection of man. So, you can find a tool that will allow you to decide on the long-awaited compromise between representatives of different faiths. The main thing is to remember that any Nazi cries are a new way to a dead end, a new blood and new defeats.

Ctrl Enter
Noticed oshЫbku Highlight text and press. Ctrl + Enter
We are
What you didn't want to know about England"Would repeat the slaughter again"
7 comments
Information
Dear reader, to leave comments on the publication, you must to register.