The tale of the "good terrorists" 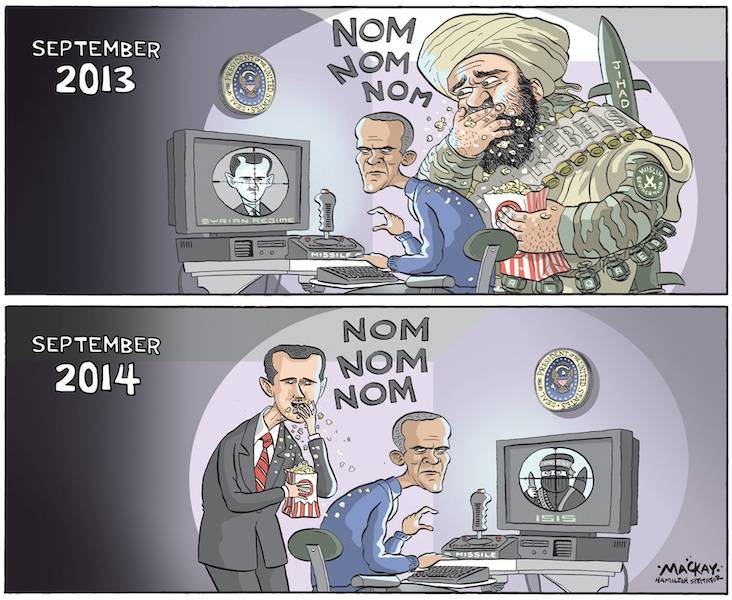 Peaceful Syrians continue to die at the hands of armed mercenaries, who have been attacked against the people by their external patrons. So, on November 5 in the province of Damascus one of the residential areas of the city of Harasta was fired from mortars. Two people died, there are also wounded. On the same day, three people were injured due to the shelling of the busy Bab Tum Square in Damascus.

The implementation of a special barbaric program of terrorists aimed at the destruction of national personnel, including highly qualified specialists, continues. On November 6, a terrorist act was committed in the province of Homs, killing the director of the Ebla gas processing plant Zuher Jadid and the leading engineer of the plant Malik Mahmud. A few more employees of the plant were hospitalized with injuries.
Mortar shells exploded in the Al-Wafidin refugee camp. A woman was killed, her family members were injured - a husband and two young children.

At the same time, on the external arena, politicians continue to argue about the need ... no, not counter-terrorism. The West still wants to strike the main blow at Damascus.

US Secretary of Defense Chuck Hagel issued a statement that Washington continues to set itself the task of overthrowing the Syrian leadership led by President Bashar Al-Assad. He added that the current air strikes on the "Islamic State" may be beneficial to the government of the SAR.

This is the main contradiction of American politics. On the one hand, the United States is forced to strike at a terrorist group that executed American citizens and caused a wide negative resonance in society. On the other hand, they do not want to cooperate with real fighters with the same terrorists - the Syrian army and leadership. On the contrary, the White House bears plans for an insidious stab in the back of those with whom, in theory, it would be necessary to cooperate.

In this case, according to the American edition of The Wall Street Journal, Washington is resorting to spying on the Syrian leadership to obtain information about the terrorists of the Islamic State. The question is - why do we need espionage, if this information could be obtained quite legally? As a result, the effectiveness of the US struggle with the "Islamic state" and other radical groups is sharply reduced. In particular, the fact of the destruction of the leader of the Khorasan terrorist group Mohsen al-Fadhli, which was reported in September, has now been questioned.

Washington's allies also continue to fight not Syria, but terrorism. Turkey and France are especially active in this direction. In late October, the presidents of these countries met - Francois Hollande and Recep Tayyip Erdoрдan. At a joint press conference in France, they made statements on Syria, strongly contradicting international law, as well as all constructive efforts to resolve the Syrian crisis, in particular, the peacekeeping mission of the UN representative Stephan de Mistura.

Hollande confirmed once again that he intends to support the "moderate opposition" in Syria. Surely they are reporting to him about the “glorious exploits” of these “oppositionists” - mortar shelling of the civilian population, terrorist acts, abductions, etc. But he prefers to put himself on a par with these killers. In addition, the French president supported Erdogan’s statement on the need to create a no-fly and buffer zone in Syria. As for Erdogan, it is clear that he is obsessed with the New Osman Empire’s ambitions and hopes to grab a fat chunk from Syria. What does France want to win? To avenge a country that more than half a century ago escaped from its colonial influence!

Or, according to some naive people, the “socialist” Hollande rightly supports certain ideas of democracy and freedom? But he stood on the same platform with Erdogan and supported him. Meanwhile, the head of the Turkish police regime is known for the fact that he was still prime minister, he bloodyly suppressed the peaceful opposition, as a result of which there were many dead and wounded. So why is Hollande so concerned about democracy in Syria? Is it not because behind her back there is another “partner” - Washington, from which there was no command to fight for the freedom of the Turkish people?

The Syrian Foreign Ministry strongly condemned the position of the leadership of France and Turkey, stating that this is “a flagrant violation of the UN Security Council resolutions on combating terrorism.” These countries "are responsible for the crisis in Syria and the bloodshed among civilians, hinder efforts to combat terrorism, and this requires the international community to condemn the hostile behavior of these governments," the statement said.

There are also politicians in the West who oppose the actions of the United States and the West against Syria. Thus, the former Italian Foreign Minister Emma Bonino gave an interview to the Lebanese newspaper Al-Safir. She stated that Turkey and other countries did not at all strive for a political settlement of the situation in Syria, and criticized the US coalition for the fact that its actions were not coordinated with the UN Security Council. Each country that is part of this coalition pursues only its own selfish goals, ”Bonino emphasized.

So, the propaganda of the United States, as well as their allies such as Paris, Ankara and others, is now based on the main “pillar” - the assertion that there are “radical” and there are “moderate” militants. The first need to bomb, and the second - to stroke on the head. And what is there in practice?

In the Syrian province of Idleb, the so-called "moderates" - the grouping "Syrian Revolutionary Front" and its minor counterparts - lost their positions to the "Islamic State." At the same time, many militants went over to the side of the latter, not forgetting to take the American weaponput them in as a "humanitarian aid". That's the whole tale of "good terrorists", and who understood - well done!