November 10, 2014
116
Much has been written about the Soviet-Japanese war of the 1945 of the year, but only recently questions about its expediency have been heard. Proponents of the generally accepted version say that an invasion of Japan was necessary. Like, we got the Kuril Islands, South Sakhalin, and in the sphere of influence - China and North Korea, and also helped the allies, the Americans. However, upon closer examination, everything becomes not so clear, and tactical acquisitions turn into strategic miscalculations. After all, we judge by the results of a football match not by the way the first ten minutes were played, but by the final score on the scoreboard.

Of course, I.V. Stalin was counting on a sphere of influence in Asia, much larger than the one that the USSR should have received in Europe. However, there is reason to doubt the chosen strategy. If you look at the outcome of that short war impartially, it turns out that the Soviet soldiers fought for American and Chinese interests. So, it makes sense to sort through the points of each of the acquisitions.

The first. Helped the allies, the Americans. Even after the capture of Okinawa and Iwo Jima, the American command was not enthusiastic about the continuation of the war. Ahead was the landing on the main Japanese islands (Operation Daunfol), to Korea and Manchuria. Only on the islands, the United States could lose millions of soldiers from 3 to 5, and in general the war could last up to 1947 and even to 1948, according to the estimates of the Americans themselves. The Japanese were ready to face off against the United States, but the invasion of the Soviet Union from the north made the resistance completely meaningless. In fact, the USSR granted the Americans an easy victory, depriving them of the joys of millions of losses and a long war. But it was possible to pull as much as the Western allies themselves were pulling with the opening of the Second Front. 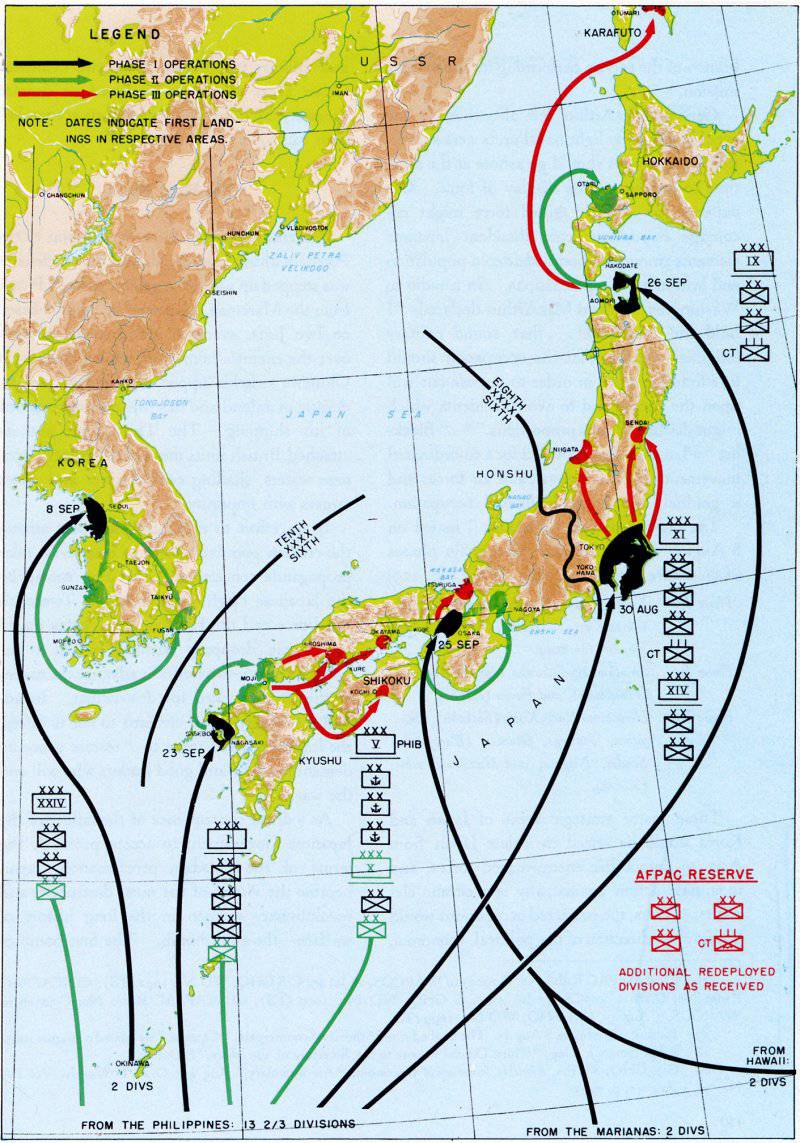 The second. Received South Sakhalin and the Kuril Islands. During the seizure, thousands of Soviet soldiers were killed and the infrastructure was destroyed, although these territories could have been withdrawn by the USSR without fighting. In Japan, they considered the possibility of offering these islands to Moscow in exchange for mediation in concluding a peace treaty with the United States. If the Soviet Union had gone to that, it would have gotten exactly the same thing, but there would have been no dispute over the South Kuril Islands now, and many people would have remained alive. The value of South Sakhalin and the Kuriles in the eyes of the Japanese government was incomparably less than the value of Korea, which Tokyo hoped to preserve.

Third. Sphere of influence in Korea and China. For decades, the Soviet Union took over the stubborn North Korean regime. As for China, the situation is even more fun: the USSR actually had a hand in creating a united and strong enemy and competitor (for the sake of a naive dream of an obedient "younger brother"), who fully repaid it on Damanskiy and in Afghanistan. After all, there was no point in returning China to Manchukuo, which the USSR recognized as an independent state. There was no point in helping to join East Turkestan. The same Manchus very much asked not to give them to China. If Manchuria and East Turkestan would have maintained independence, then today's Russia would not have common borders with the Middle Kingdom at all.

The only Soviet acquisition in China — the Port Arthur base was returned to China in 1954. The Changchun section of the CER was transferred to China even earlier.

Total That war brought much more problems than good. With undoubted military success, we have a complete political and strategic miscalculation of the Soviet Union. In general, there is nothing surprising here, since the post-war foreign policy of Moscow as a whole can be called a failure in many areas, be it Europe, Turkey, Iran or the Far East - each deserves a separate fair analysis. The consequences of the short-sightedness of the “leader of nations”, who was trying to become the master of Asia, will have a very long effect. The idea that a strong China will never be pro-Soviet, and so came to the Kremlin.

In the current situation, the force rebuilding of borders in Asia is even more explosive than in Europe. Japan is seething with hatred and burning revanchism. China, oddly enough, too. In Beijing, they believe that in the post-war division of territories and spheres of influence it was greatly cheated, although it was a sin to the Chinese to just complain. So the new division of the world is not far off. And God forbid that he touched us.