"The whole world of armored doors" (Ukraine) against RPG

November 8, 2014
95
New tests of anti-cumulative screens for armored vehicles in Ukraine, organized by the company "The whole world armored door"
Further explanatory text, videos and photos from the site of the company:

Enterprise "The whole world of armored doors" decided to help our armed forces in the fight against terrorism and Russian aggression: given the huge number of armored personnel carriers, especially the old model, unprotected from cumulative shots of anti-tank grenade launchers. By themselves, the old BTRs, from the words of the military, are quite good and reliable, but the lack of elementary protection against RPGs makes them a tasty target for enemy rocket launchers. The same situation with the BMP, BRDM and other Ukrainian armored vehicles.
Our welders in short recreated the anti-cumulative screen using the most common scheme - a metal grid with small cells for viewing, saving metal and, of course, a reasonable weight distribution. Since this is a matter of extreme importance for the army, and we didn’t have our own experience in creating and testing such screens, we didn’t pin special hopes on this first sample, rather we wanted to quickly take it to the landfill, shoot it, seeing what such cumulative shells and that they represent their consequences directly with their own eyes and do the work on the errors, which is also a fairly good result in itself, creating an improved screen afterwards taking into account all the nuances.

In the first sample of the anti-cumulative screen, the cells were metal strips of sufficiently thick metal located sideways to the armor and to possible projectiles at a vertical distance of no more than 65-70 mm from each other and up to 350 mm in the horizontal plane of the screen.
To test the effectiveness of the screen, we also created a sample that simplifiedly simulates the armor of a potential armored personnel carrier. We deliberately made the sample weaker than real armor, in order to strive for better results.
By analogy with the main sample of the screen, we created several small "screens" of a different design. 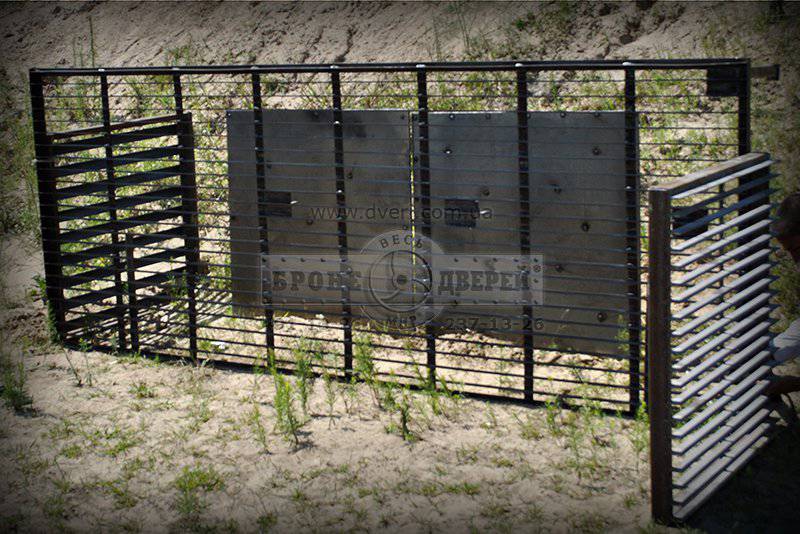 Granatomotchiki brought with 40 mm grenade launcher RPG-7 from 4 cumulative shots and disposable anti-tank grenade launcher with a cumulative charge: 2 64 pieces mm RPG-18 "Fly" and the same number 72 22-mm RPG "net". Shoot decided to increase combat power. The first in business decided to experience the legendary "fly".
They decided to shoot from a distance of 50 meters. The first shot showed an enormous value of the size of the cell of the anti-cumulative screen, it must be subcaliber, otherwise the grenade will simply fly between the walls of the cell and the screen simply will not show itself at all. 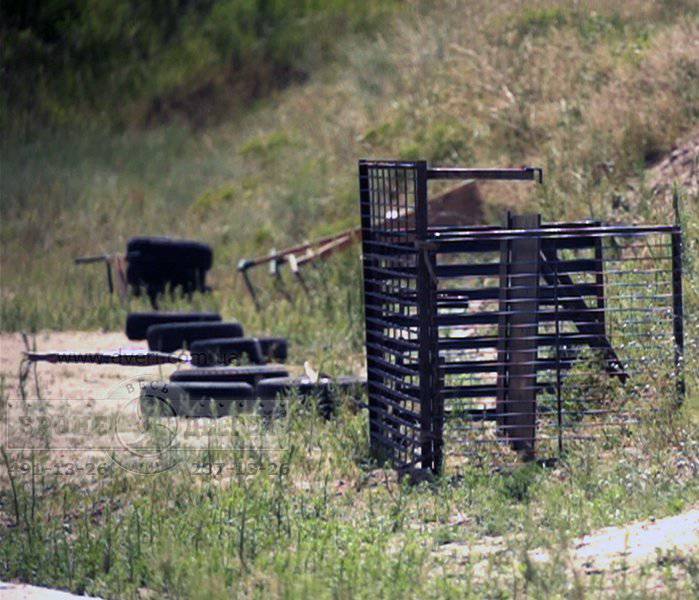 64 mm grenade at a speed of up to hundreds of meters just squeezed between the guides (clearly seen in the video), forcing them to unscrew slightly, which prompted the output to reduce the horizontal distance between the vertical edges of the screen. In fact, having flown the screen, the grenade successfully penetrated our improvised armor.

Coming closer after the shot, those present not only saw how the grenade broke through the target, but also that it overturned the target and the protective screen against cumulative projectiles on the ground. Here is such a force of the explosion: 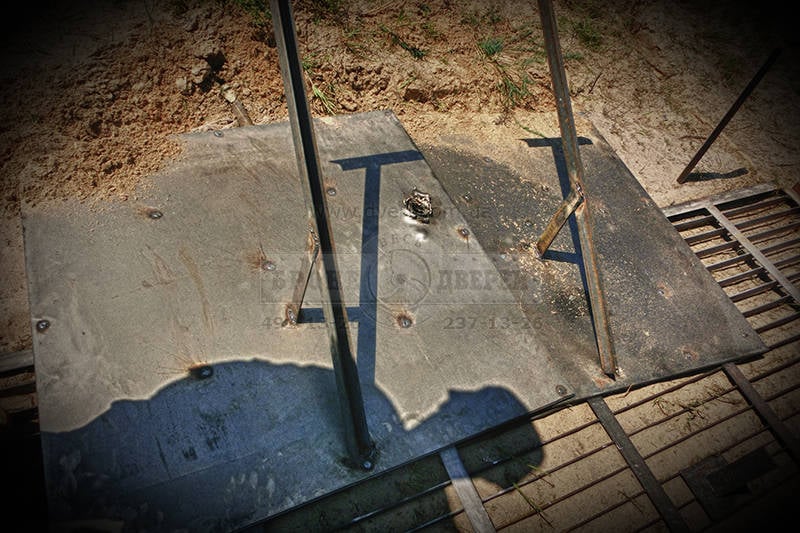 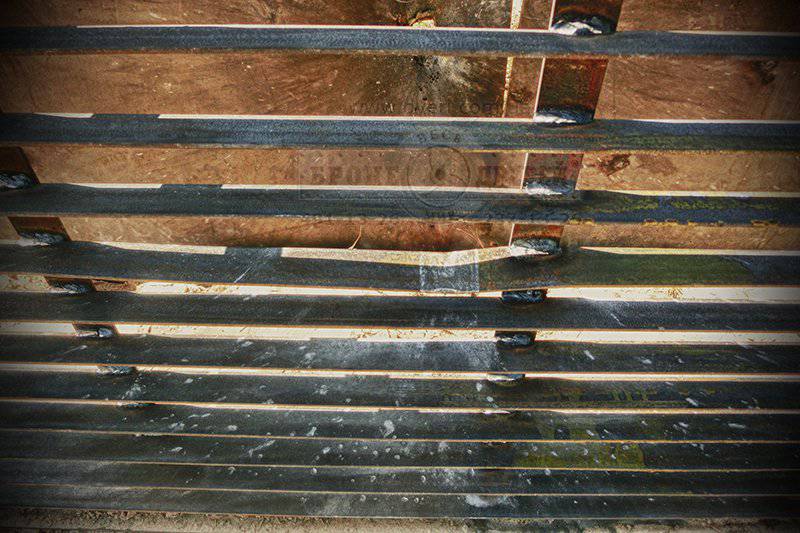 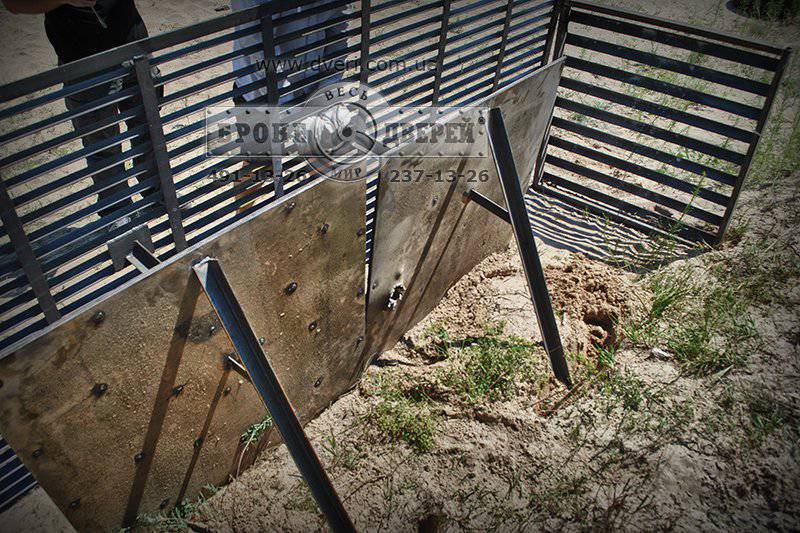 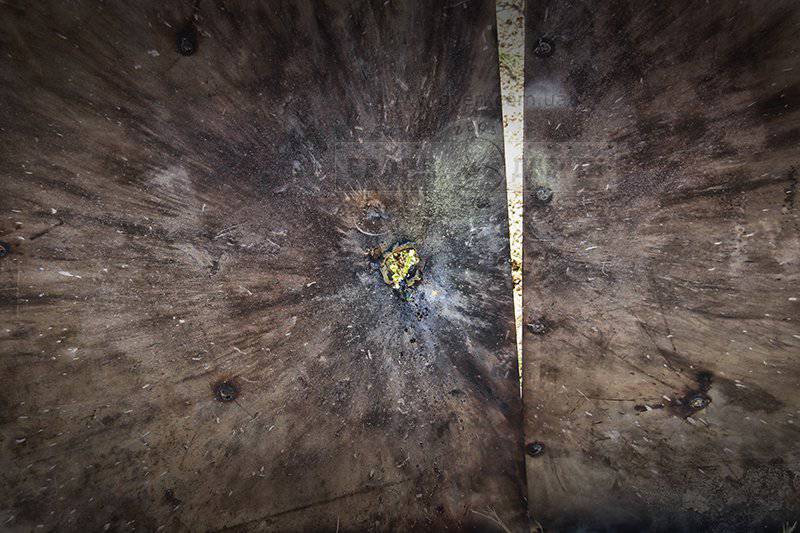 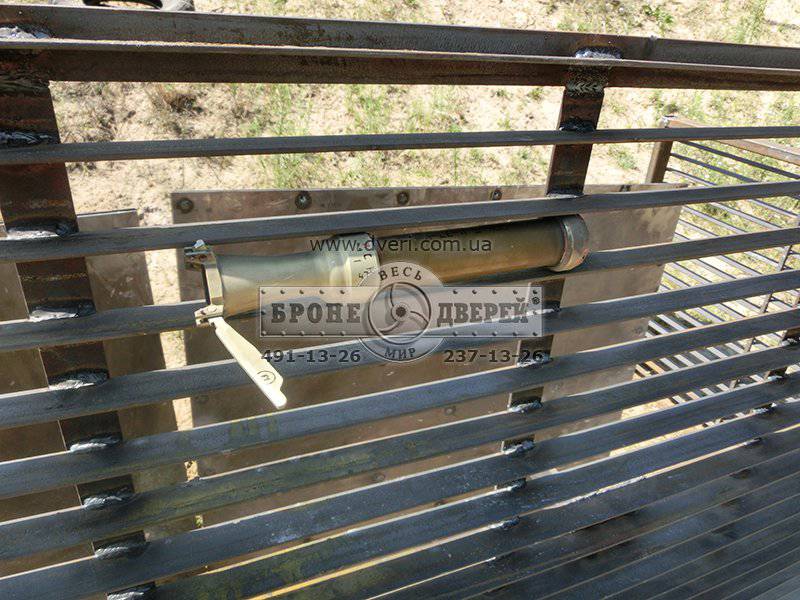 Shooting RPG-22:
Surprisingly, the grenade ... Just broke, meeting our protective screen at speed along its path. There was no explosion as such, but the phlegmazitized heat-resistant HKT, it was okfol, an explosive for the formation of a cumulative jet, stuffed in a grenade just scattered into pieces near our target of the anti-cumulative screen.
Judging by the video footage and the performance characteristics of the grenade launcher, the grenade flew up to the target at a speed slightly higher than 100 М / С, that is, the impulse of the grenade was very high - about 135-150 КГ × М / С. With such motion parameters, if we assume that the grenade’s fuse mechanism was broken tangentially about the edge of the anti-cumulative screen cell with such a powerful impact, it becomes clear why there was no detonation. The video shows quite well how at the moment of the collision of a grenade with a grill a small shiny part goes up from the extreme point of the grenade. Part of the design of the fuse? Unknown. To say exactly why the detonation failed, probably, no one will undertake. Even the production defect can not be written off either. In any case, this situation shows excellent steady qualities of okfol.

What about our armor BTR? And the armor did not even suffer, because the target was only a blow, in fact, ~ 1,3 kg of blank. 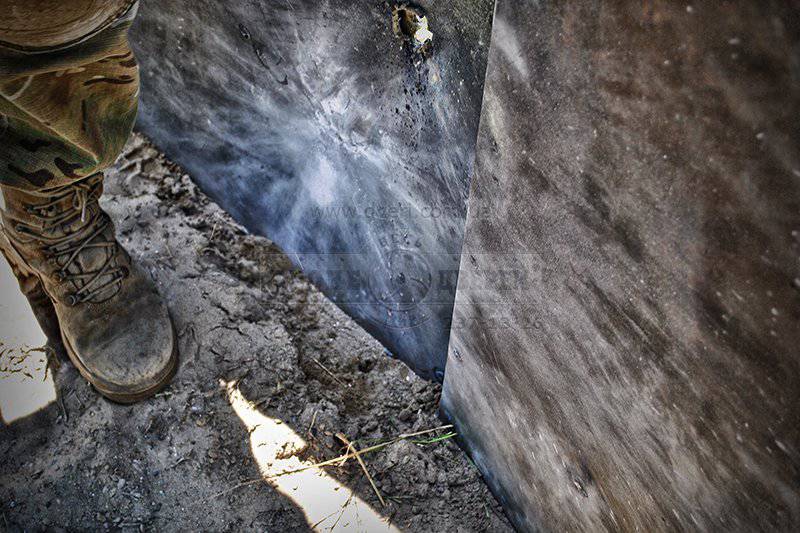 Shooting RPG-7:
The first shot from the RPG-7, unfortunately, went a little above the protective anti-cumulative screen. No one went to watch and immediately unanimously decided to prepare for the next shot. 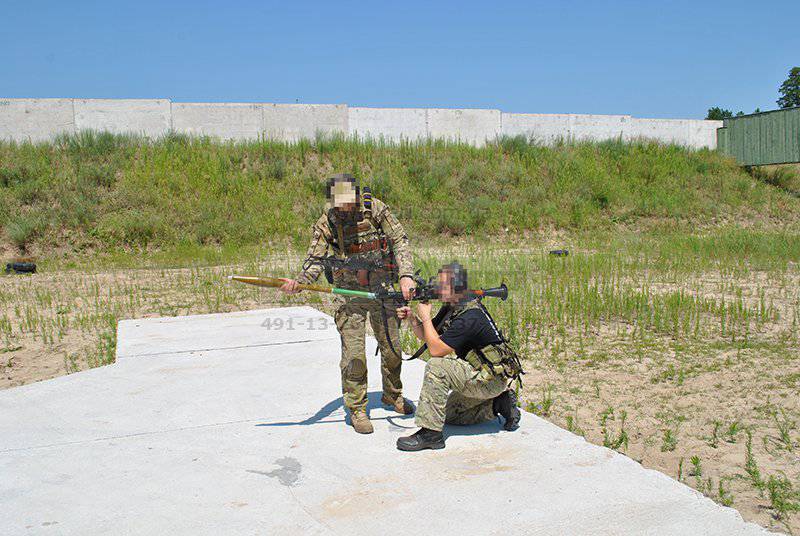 The second shot pleased us: clearly on target! A powerful grenade not only broke the strip of rigidity of the screen and the edges of the cell, but also broke through a decent hole in an armored target. 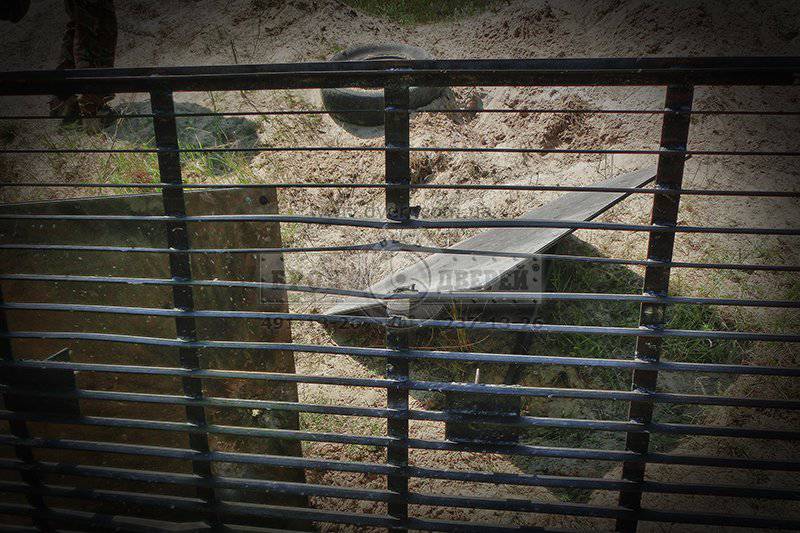 The jet was so powerful that it broke through the anti-cumulative grille, and armor, and beautifully entered the sand parapet. In the place where the cumulative beam entered the sand sintering of the sand occurred under the action of high temperatures. 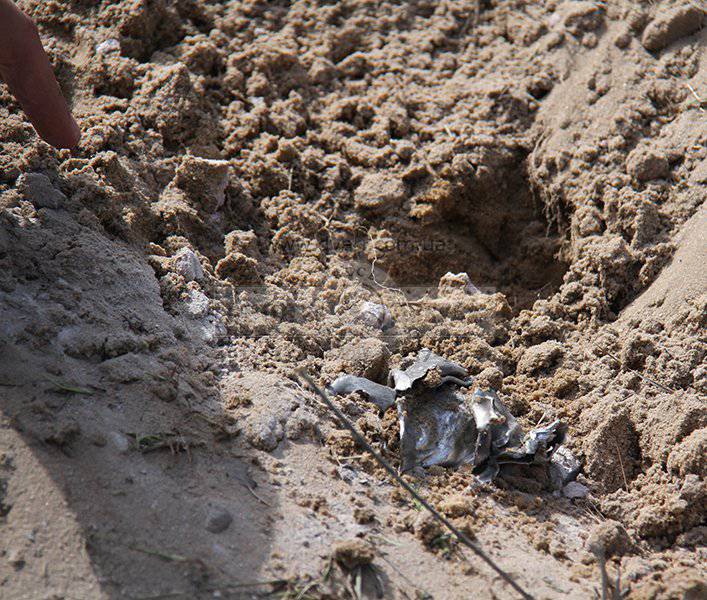 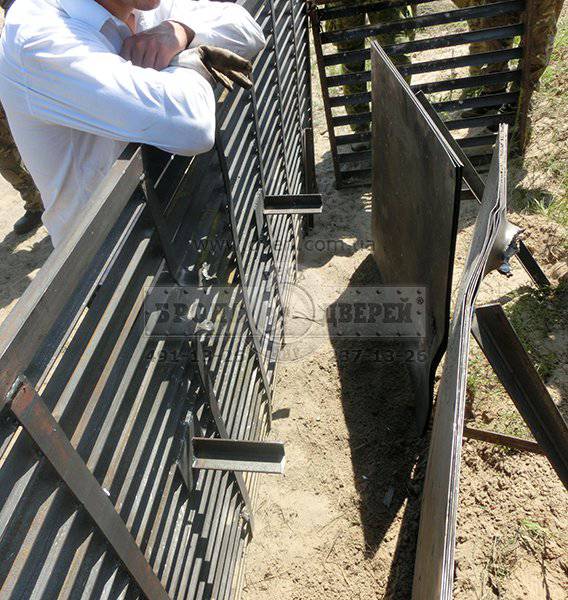 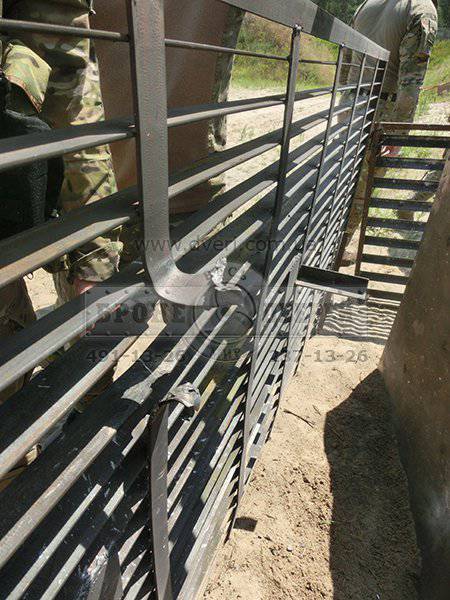 Additional shots RPG-18 and RPG-22 on the anti-cumulative grille:
The second shot turned out to be no less interesting: the grenade didn’t reach the target for a while and, bouncing off the ground, did not explode, hit the target sideways, there was an explosion, and the cumulative jet went into the ground.
A powerful explosion destroyed the cell guides of the anti-cumulative grid, and the resulting cumulative jet even slightly hooked the bottom edges of the screen, tearing them off without any problems, since the direction of the impact was not from the side, but from top to bottom at a slight angle around 15. 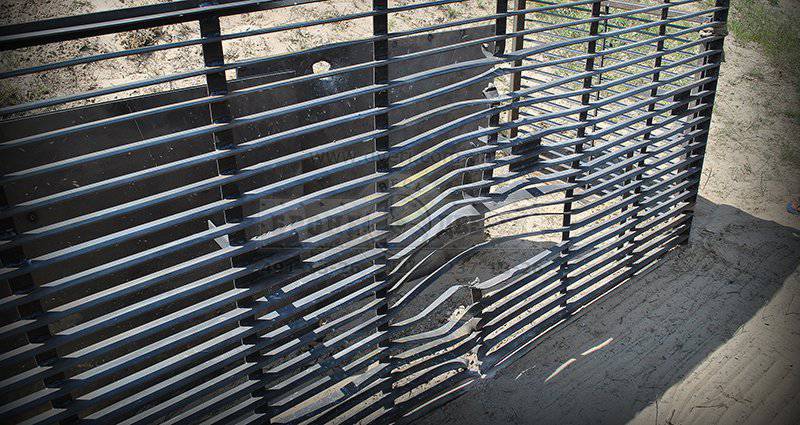 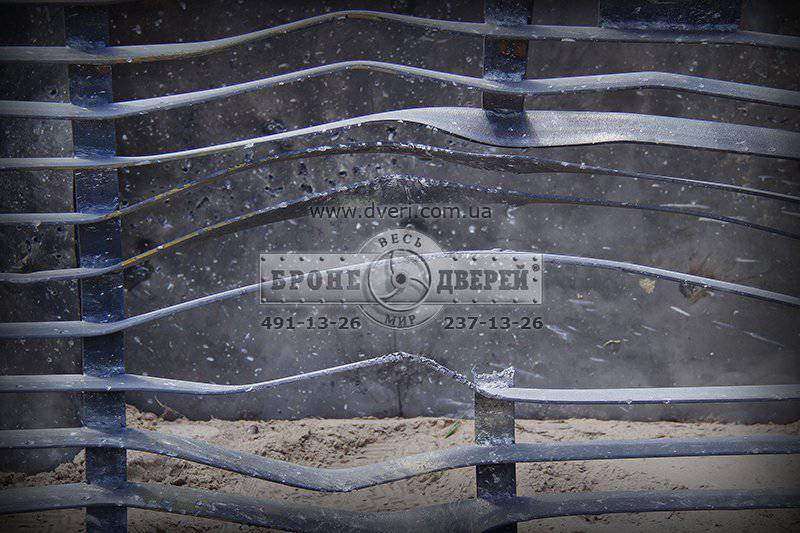 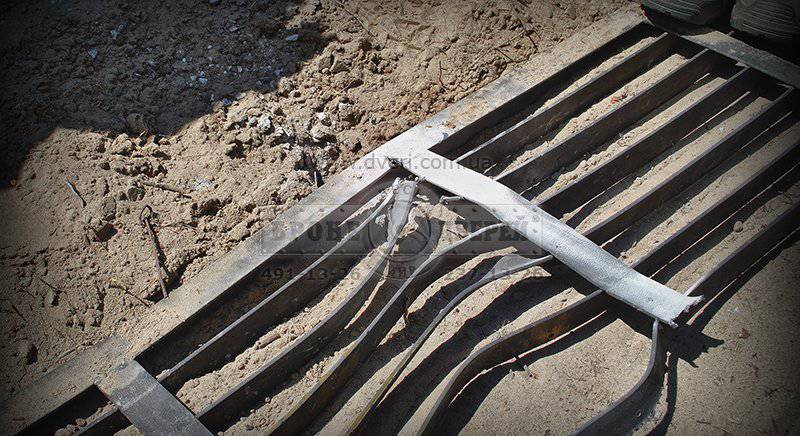 Again, you can clearly see how sand is caked into pieces (silica or SiO2). The target itself, located behind the anti-cumulative screen, practically did not suffer as a result of such an explosion. 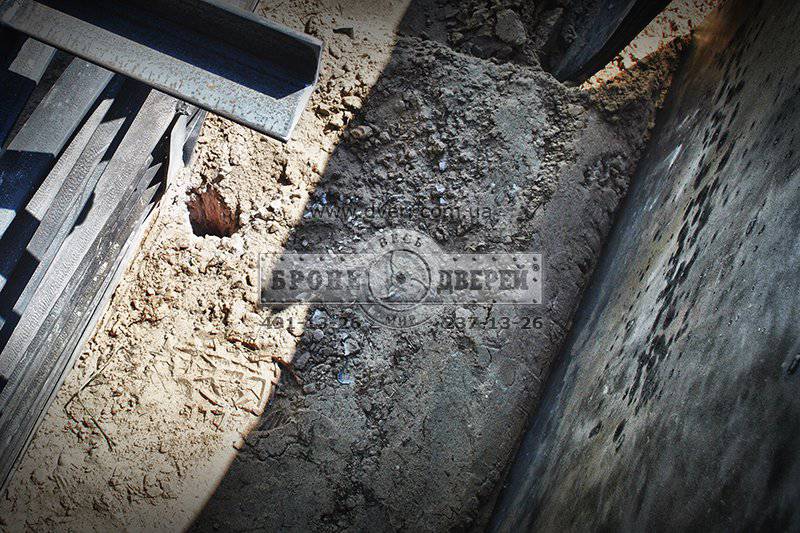 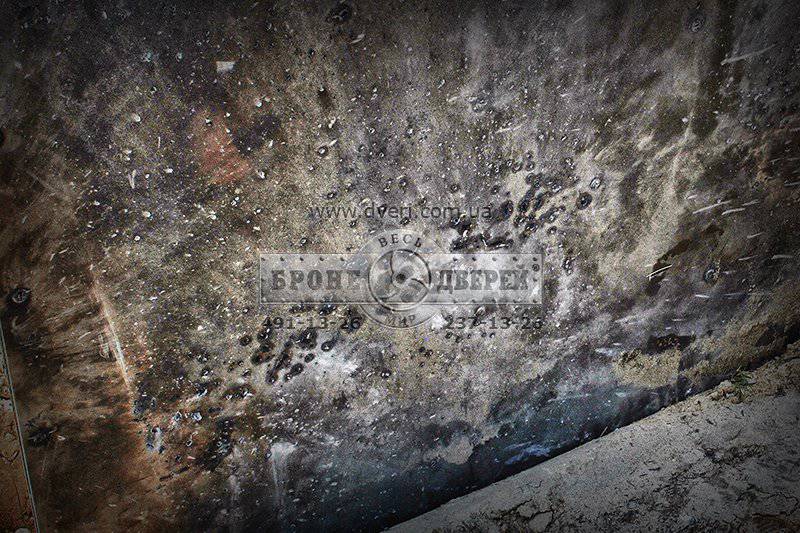 The 72 mm RPG-22 "Net" grenade was stopped with an anti-cumulative screen, but the cumulative jet broke the edges of the cell and reached the target, but due to the fact that the axis of the jet intersected the plane of the target at its extreme point, it turned out not a hole, but only a semicircle, like a crescent. 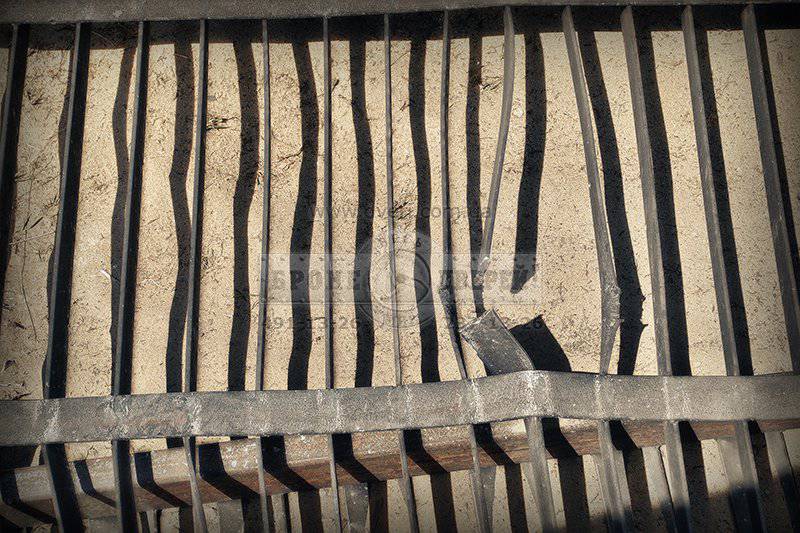 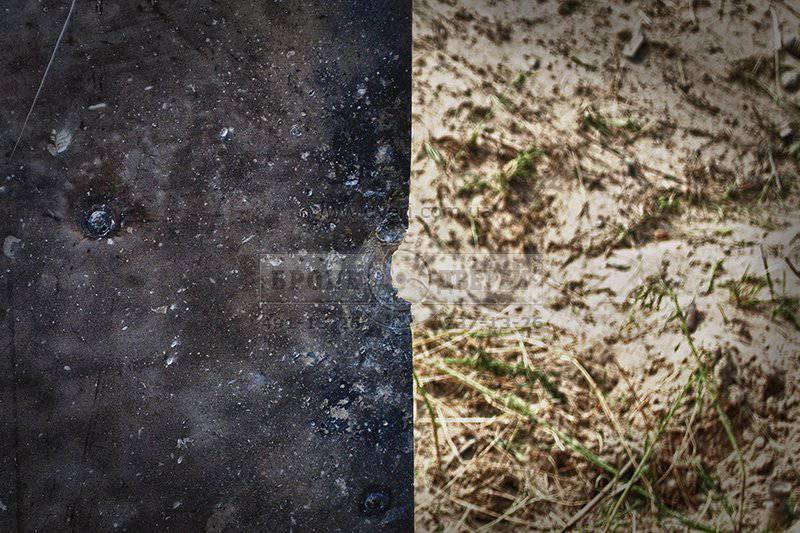 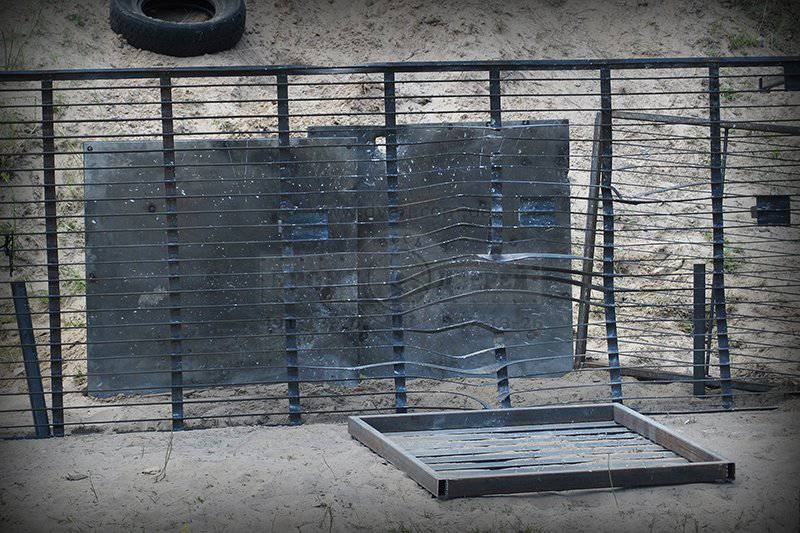 On the website they write that two more tests of the converted screens have been carried out, they have allegedly already gone to the finish line before the production.