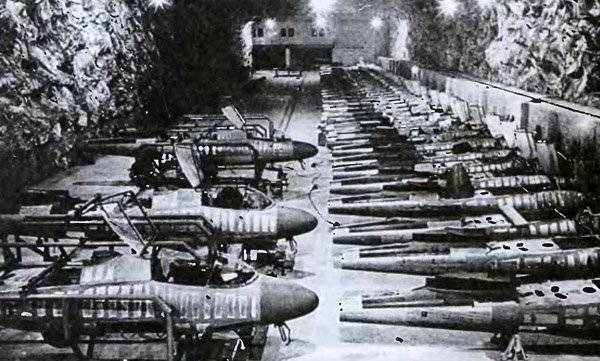 The basic principles and conditions for the payment of reparations by Germany and its allies were defined at the Yalta and Potsdam conferences of the 1945 year. For the USSR, the topic of German reparations was closed in the 1953 year, when Moscow completely abandoned the reparation deliveries of goods from the German Democratic Republic, switching to their payment at CMEA prices.

Due to the division of Germany and for a number of other reasons, even the general accounting of Germany’s coverage of its reparation obligations was not adjusted. Today, the German government does not have accurate information on reparations and operates with only a few expert assessments.

Some issues of reparation claims and obligations were and continue to be resolved with Germany on a bilateral basis, on the sidelines. Thus, the agreement on reparations between the Federal Republic of Germany and Israel (1952), known as the Luxembourg Agreement, is probably the only case in storieswhen payments of reparations are provided to the state, which did not exist during the war that gave rise to reparations. During the period of the Luxembourg Agreement (1953-1965), punctually executed by Germany, deliveries on account of German reparations ranged from 12 to 20% of annual imports to Israel. Some experts believe that the creation of its economy, Israel is more obliged to the German reparations than to the US aid.

After the end of the Luxembourg Agreement in 1965, Germany continued to pay compensation to various foundations and organizations in Israel, which, in turn, were engaged in raising funds to individuals identified as victims of Nazism.

By 2008, Germany paid Israel in compensation for the victims of the Holocaust reparations totaling in excess of 60 billion euros.

You can read more about this in the book by American political scientist Norman Finkelstein, Holocaust Industry: Reflections on the Exploitation of Jewish Suffering, published in 2000.

As N.Finkelstein notes, most of the funds did not reach the Jews who were victims of Nazism: the money was stolen by unscrupulous businessmen who turned the “Holocaust industry” into a gold mine. According to our estimates (taking into account changes in the purchasing power of the currency), the amount of reparations received by Israel from Germany for the period 1953-2008. approaching 50% of the total reparations received from Germany by the Soviet Union (1945-1953).

One of the first topic of "unpaid reparations" raised Poland. After the Second World War, a considerable part of the territory of the former Third Reich passed to Poland. In 1945, millions of Germans were evicted from there. Displaced Germans and their descendants, appealing to the right of restitution, began to file suits in German courts demanding that they return their property (primarily real estate), which remained in their homeland. German courts ruled in favor of the plaintiffs. To represent the interests of such Germans, the Prussian Society for the Return of Property was created. By the beginning of 2000, the cumulative amounts of claims and court decisions on them were already measured in billions of dollars. The former German owners were especially inspired by the fact that Poland in the 1990-ies was one of the first in Eastern Europe to adopt restitution laws for the Poles. More than 12,5 billion dollars were spent on restitution from the Polish treasury, and tens more billions are planned to be spent, since the number of applications has already exceeded 170 thousand. It is important to emphasize that in Poland, the right of restitution applies only to Poles. The Germans do not have any rights under Polish law, they have to seek their rights through the courts.

Perhaps this circumstance prompted the Polish Sejm to raise in September 2004 of the year the question of German reparations, which, allegedly, were not received in full. The special resolution of the Polish Parliament said: "The Seimas declares that Poland has not received sufficient reparations and compensation for the enormous destruction, material and non-material losses caused by German aggression, occupation and genocide." Poland lost six million people during the war years; From 1939 to 1944, the Polish industry was almost completely destroyed, Warsaw and many other Polish cities were completely destroyed. The amounts of reparations received by Poland really could not cover all its damages. It is another matter how much, from the point of view of international law, attempts to reconsider the conditions of reparation payments to Germany after almost seventy years are justified. We are not even talking about the fact that the authors of some publications in Poland bring the reader to the conclusion: if the Poles are to demand additional compensation, it is not from Germany, but from ... Russia. Since, after the war, Poland did not receive direct reparations from Germany: the USSR received reparations from the territories under its control, and listed Poland with some of these reparations.

For the last ten years Poland has not returned to the question of German reparations. Perhaps because in 2006, German Chancellor A. Merkel publicly told Polish Prime Minister J. Kaczynski that the federal government "does not support the Germans' private claims to return their property in Poland." However, there is no guarantee that at some point Warsaw will not again raise the topic of reparations. And if today the Poles return to this issue, they, most likely, will make a complaint not on Germany, but on Russia.

Note that Poland is not alone in its reparation claims. In 2008, Italy filed a lawsuit with the International Court of Justice in The Hague, demanding that WWII be repaired from Germany. This lawsuit was dismissed, the Hague court defended Germany, saying that the Italian demand "violates the sovereignty of Germany."

Another country that revived the theme of reparations was Greece. Despite the unprecedented restructuring of its external debt in 2012, Greece is one of the leaders in terms of sovereign debt. At the end of the third quarter of 2013, the national debt of all countries of the European Union relative to their total gross domestic product was 86,8%. In the Eurozone, this figure was 92,7%. And in Greece it was 171,8%. The situation for Greece is desperate. Things reached the point that rating agencies and international organizations transferred Greece from the category of “economically developed” to the category of “developing” countries.

In search of ways out of the impasse, the Greek government prepared a demand for Germany to pay reparations to it following the Second World War. Greece does not deny that at one time received from Germany a certain amount of reparations. The first tranche of reparations was received at the end of the 40-x - the beginning of the 50-x. Twentieth century. These were mainly deliveries of industrial products (machine tools, equipment) totaling 105 million marks (approximately 25 million dollars), which in current prices is equivalent to 2 billion euros.

The second tranche of reparations occurred in the 60-ies. Twentieth century. In 1960, Greece and the Federal Republic of Germany concluded an agreement according to which 115 of millions of marks was sent to the Greek victims of Nazism. The payments were tied to the refusal of the Greeks from the additional claims of individual compensation.

The National Council for German War Reparations, headed in Greece by war veteran Manolis Glezos (Manolis Glezos), called in 2013, the amount of damage at half a trillion euros. In March 2014 of the year, Greek President Karolos Papoulias again demanded reparations from Germany for the damage caused to the country during the war. The Greek side claims for 108 billion euros in compensation for damage and 54 billion euros for loans issued by the Bank of Greece to Nazi Germany and not returned. The total amount of reparation claims of Greece is 162 billion euros. At the current price level, this is equivalent to 5 - 6 thousands of tons of gold. Stalin, we recall, in Yalta called the amount of reparations to the Soviet Union, equivalent to 10 thousand tons of gold.

The fate of the Greek initiative in the world is closely watched. This is what Russian publicist Dmitry Verkhoturov writes about the possible demonstration effect of this initiative: “Germany’s claims for reparations are right to put forward, say, Cyprus, occupied by the Germans during the war, or Italy, which was also occupied by the Germans after the fall of the Mussolini regime and fighting took place on its territory. If France does not do well either, then it will have the opportunity to reclaim payments for occupation and destruction from Germany. And Belgium, Holland, Luxembourg, Norway, Denmark? And the UK may demand to pay the consequences of the brutal bombardment. For example, it will be difficult for Spain to substantiate its claims to Germany, but something can be invented, for example, to “hang” on the Germans the damage from the civil war (1936 - 1939). If the development of events proceeds according to the “Greek version,” in the course of a few years only memories can remain from the European Union. ”

There is reason to believe that in the run-up to the 70 anniversary of the victory over fascism, the revision of the history of the Second World War undertaken in the West, the denial of the decisive contribution of the USSR to the victory over Hitler Germany, the admission of the Soviet Union to the main initiators of the war will be crowned by the presentation of the Russian Federation as the successor of the USSR reparation claims: they say, the Red Army did not liberate Europe, but captured, enslaved and destroyed.

In order to prevent this, Russia will need to raise all documents of the Extraordinary State Commission for Damage that worked in the Soviet Union during the war (the full name is the Extraordinary State Commission to establish and investigate the atrocities of the German fascist invaders and their accomplices and the damage they cause to citizens, collective farms, public organizations and state enterprises and institutions of the USSR), materials of the Yalta and Potsdam conferences 1945 of the year, documents of the Council of Ministers of Foreign Affairs of the the USSR’s bilateral agreements on the Paris Peace Treaty of 1947 with the countries that fought on the German side. Reparation payments and deliveries of Germany at best covered only 3-4% of the damage inflicted on the Soviet Union, as determined by the Extraordinary State Commission.