Russian language in Syria will be the "first foreign"

November 6, 2014
27
In the Syrian schools began to introduce as a compulsory subject "Russian language". This school year, along with Arabic, 2,5 thousand students of 7 classes began to study it. And in the middle of November, the Russian language department will be opened at the University of Damascus. The project is actively supported by the Russian Federation. He writes about it Rossiyskaya Gazeta. 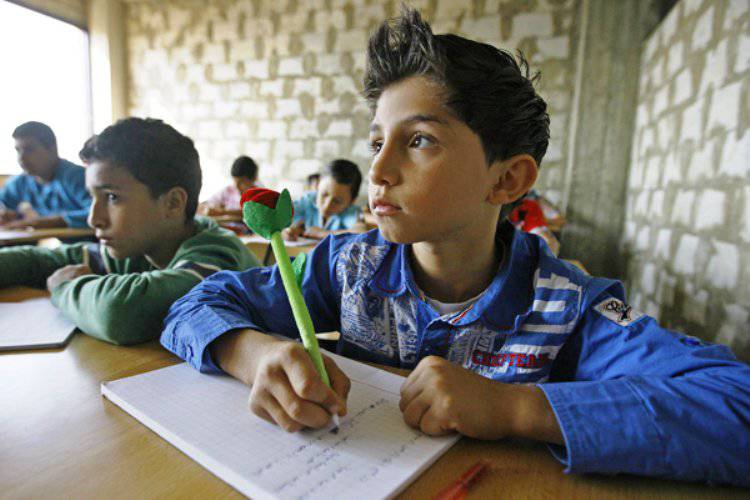 “In Syria, there is a large shortage of teachers of the Russian language,” said Veniamin Kaganov, Deputy Minister of Education and Science of the Russian Federation. “We agreed that in February 2015 of the year the first two specialists will go to Syria, who will teach Syrian teachers on the spot how to teach Russian as a foreign language.”

Moreover, the Institute of Russian Language. Pushkin has developed a "project of distance learning methods of teaching Russian as a foreign language."

“Syrian teachers can enroll in this course starting in January 2015,” the institute explained. “While the portal is working in Russian and English, it is planned that in 2015, it will be translated into Arabic and some other languages.”

“Such a large-scale task, like the introduction in the whole country of the system of teaching Russian, cannot be solved only remotely, of course,” explained the Rector of the Institute. Pushkina Margarita Rusetskaya. “We need a massive dispatch of teachers there who will begin to train local teachers in person.” Rusetskaya assumes that the sending of teachers will be financed by the Russian World Foundation, where there is a special program called Russian Professor.

Another problem is the lack of textbooks. Now available textbooks only for the seventh grade of the Arab school. At least 30 thousand copies are required “for more advanced levels of training”.

“The Russian language is very popular in Syria because of the large number of specialists who studied in the USSR and the CIS countries, as well as their wives who came from the Soviet Union,” said Hazvan Al-Oise, Minister of Education of Syria.

By the way, the minister himself graduated from the Kharkov Polytechnic Institute, is married to a Russian woman and speaks good Russian. His daughter is studying at the Academy of Music. Gnesinyh.

According to his calculations, there are now about 35 of thousands of specialists who studied in the USSR or in the CIS countries in Syria.

“We are trying to increase the popularity of the Russian language not only through schools,” the minister noted. “For example, the Syrian Ministry of Education has its own TV channel, which broadcasts Russian cartoons every day, albeit with captions in Arabic to facilitate perception.”

Al-Oise believes that in Syria it is necessary to expand not only the teaching of the Russian language, but also to "strengthen the popularization of Russian culture."

“We know a lot of Russian classical literature, but they know almost nothing about your modern writers in Syria,” said al-Oise, adding that a collection of their works is being prepared for publication.