Ukraine: the scale of hidden losses remains to be assessed and recognized 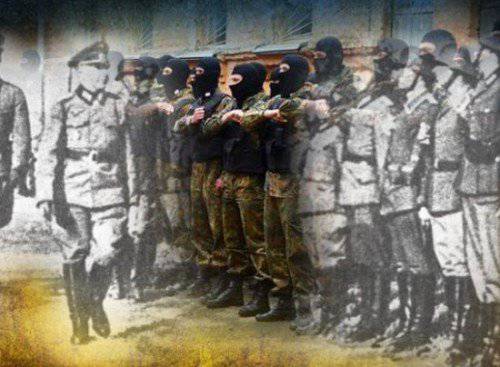 The losses of the Kiev forces during the so-called ATO (if you follow the terminology of Poroshenko, then the “2014 national war of the year”) for the month of September, according to official statistics of the National Security and Defense Council, amounted to all 789 people. These data are very different from the data that lead the militia Novorossia and Ukrainian volunteers. Both those and others call numbers where big. For example, the militia claim 8 thousands of dead Ukrainian soldiers. If we consider how often the Ukrainian soldiers get into the "boilers", to listen to the surviving warriors, it becomes obvious that the losses in 789 people. - this is a bluff.

But this is the tip of the iceberg. In the smoke of battles and defeats, few in Ukraine are aware of the fact that every conflict has hidden losses. These losses are not the soldiers on the front line, but the population of the country. From economic turmoil, technological accidents and depressing social atmosphere. What's in Kiev, in Chernihiv or Uzhgorod.

Here are a few examples.

The first victims of the energy policy of the Kiev authorities appeared. With the onset of the autumn cold on the background of the energy crisis, people begin to heat their homes with electrical appliances. Electric networks do not withstand voltage, short circuits and fires occur, people die. Of the latest cases - the death in the fire 25-year-old woman in one of Kiev nine-story building. The press service of the State Emergencies Service of Ukraine in its time presented a report on the reduction in 2013 of the number of fires by 23%, the number of dead by 34%, and material damage by 54%. Then I had to report a rapid increase in such incidents, victims and damage in 2014.

According to statistics, voiced by the Kyiv Institute of Emergency Situations, it is possible to estimate the scope of this phenomenon across the country. So, in September, 2014 Kiev firefighters made 61 departure, and in October - already 70. During the winter, fires due to cold batteries in the apartments of Ukrainians and their stubborn desire to keep warm will reap a new “harvest”. Only these deaths are unlikely to be included in the statistics of the total losses of Ukraine from the reigning political chaos. The fire service has already appealed to citizens with a request not to abuse electric heating devices. In the meantime, there is social advertising on Ukrainian TV, where adult characters, pretending to be fools, explain to the viewer how it is comfortable to live without electricity and by candlelight.

Death from fires is only one side of trouble. In Ukraine, seriously ill people die from a shortage of drugs. Essential drugs are running out, and the authorities are in no hurry to take care of patients suffering from diabetes, hemophilia, cancer, HIV or tuberculosis. Among the patients are many children. They can be saved on condition of timely medical care. But government procurement of medicines failed.

Every day in Ukraine, these children pass the point of no return - remain disabled for life or die. Prices are rising, money in the budget is not enough for the healthy, not to mention the sick. Ukraine is plunging not only into the energy crisis, but also into a drug crisis.

October 21, the so-called black Tuesday, relatives of seriously ill patients held a mourning rally at the walls of the Cabinet. The action is held weekly, but the list of participants is reduced. Some die without waiting for help. In a token of their grief, the protesters spread a black cloth at the entrance to the building. A poster appeared on the street demanding the Cabinet to urgently purchase medicines guaranteed by law and sad statistics were given - 1607 deaths every day from serious diseases, many of which could be prevented.

The action is coordinated by the Patients of Ukraine Charitable Foundation. But even after “Black Tuesday”, the authorities did not take care of providing medicines for seriously ill patients. Instead, one of the deputies of the Verkhovna Rada said that “Patients of Ukraine” is a pocket organization of the Minister of Health Oleg Musia and they pay a lot of money for participating in rallies. At the same time, the Ukrainian media reported on the initiation of a criminal case against the head of the organization, Dmitry Sherembey, that D. Sherembey himself was later forced to refute.

Whatever it was, but dozens and hundreds of deaths due to a shortage of drugs that were not procured in time due to the fault of Kiev, will not be included in the official list of losses of post-Maid Ukraine.

Behind the scenes is information about social losses caused by political instability in the country. Ukrainian psychiatrists claim that the percentage of irreversible psychogenic disorders among servicemen participating in the ATO is 40%. This means that, for 40%, psychogenic problems develop into psychiatric problems requiring treatment in relevant clinics.

Ukrainian specialists refer to exceeding the allowable length of stay of military personnel at the front line (at the normal rate of 30-40 days, Ukrainian soldiers are there for 4-5 months). Without denying the importance of such a factor as the duration of staying at the forefront, let us point out that the militias of Donbass have been on the front line for more than six months. They have nowhere to go, and their houses and apartments have long ceased to be a safe haven. But the psychogenic loss of the militia is not reported.

It seems that moral motivation plays a significant role here. The militiamen are confident that they are fighting for their land, for their loved ones, for a just cause. Ukrainian soldiers understand that they are fighting for the interests of the oligarchs, for the implementation of the nationalistic hallucinations of Lyashko, Tyagnibok, Yarosh, etc. The morale of the militia is higher than that of the Ukrainian forces of the “anti-terrorist operation”.

The overwhelming amount of psychogenic losses later will result in a worsening of the criminal situation in the country. The anger of tens of thousands of men with a cracked psyche and skills to handle weapons, crippled by the junta war, multiplied by the availability of the weapon itself, weakness and corruption of the law enforcement system, as well as a sense of social loneliness (the state is not in a hurry to take care of the wounded and demobilized soldiers) will result in an increase in the number of serious crimes.

The first swallows are already there. In Odessa cafe, a drunken visitor blew up a RGD-5 grenade. Three people were injured. In the Dnipropetrovsk region machine collectors were shot from machine guns and a grenade launcher. Four people killed. When in Ukraine, in broad daylight, were they collecting collector cars from grenade launchers? This is a new trend with a tendency to continue.

Let's remember how difficult the criminogenic situation in the Soviet Union was in the post-war years (the film “The Meeting Place cannot be changed” is just about that). Then it was possible to restore order only thanks to a solid vertical of power and the coordinated work of all government departments. Ukraine does not have anything like this, so robbery, robbery and banditry become frequent phenomena of the Ukrainian everyday life.

The Kiev junta dealt a serious blow to the educational system and the intellectual elite of the state. School and university programs in Ukraine will be changed to give students ideologically narrow, historically incorrect and distorted knowledge.

With such an approach, it is extremely difficult to cultivate deep-minded intellectuals. And the question arises: who will rule the country in 10-15 years? Where will the minds, capable of penetrating through the thickness of temporary events and foreseeing the right route of development of the state, be taken if the youth and school are scared by primitive horror stories about famine, Muscovites and legends about the great ukrov?

Already, the Kiev junta is clearing away too clever ones: under the so-called Lustration included leading experts in the field of the military-industrial complex, aerospace industry, generals and senior officers, teachers and managers. The only fault of these people is the lack of puppy delight about the coming to power of the “chocolate Petit”. Petr revenge.

Another mass category of the population that is rapidly filling up the lists of hidden losses is the old people. They, unfortunate, have to rely only on themselves. Miserable pensions, expensive medicines, an unhealthy ideological atmosphere in society, when everything that the older generation lived in their youth and what they considered to be their achievements, is spat upon and maliciously mocked, they do not add to their health. The mortality rate among the elderly will increase, and the long-livers among them will be less and less.

Ukraine is slipping smoothly into the sad 1990, when, due to political and social disorder, the scale of early mortality from heart disease, alcohol and drugs rapidly creeping up, entire segments of the population turned out to be behind socially active life, their representatives were marginalized and left early, and killings, explosions, and gunfights have become commonplace.

All military conflicts have a clear, external side of losses, and an internal, hidden one: the latter, as a rule, eludes the attention of everyday consciousness, which does not see direct causal connections between what is happening on the front and what is happening in the rear. The massacre unleashed in the Donbas by Kiev ricochets throughout the entire Ukrainian society, and the full scale of the damage inflicted by the Kiev junta to its own country and its own people has yet to be assessed.