Yegor Kovalevsky and the countries of the East 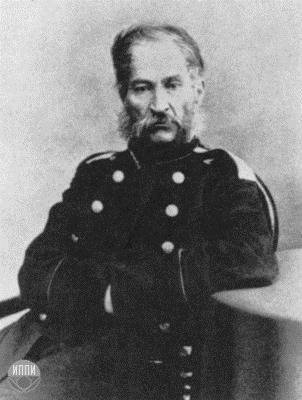 В stories of the Russian Ministry of Foreign Affairs, Kovalevsky is perhaps the only example of a leader who has set the scientific activities of his department to such a high level and so successfully applied a scientific approach in solving diplomatic tasks.

Egor Petrovich Kovalevsky was born on February 6 (17) in 1809 [1] in the village of Yaroshevka, Kharkov Province, in a noble family. In 1825-1828 He studied at the philological faculty of Kharkov University, after which he served in 1830-1837. mining engineer in the Altai and Ural gold-mining plants.

Kovalevsky began to publish in 1832 as a poet, novels and novels also belong to him, but his essays on trips to the South of Europe, Central Asia, Africa, and the Far East brought him fame.

According to the results of his travels in Afghanistan, the Balkans, the Carpathians, Kashmir and Central Asia, Kovalevsky wrote the book “Traveling by Land and Sea” in 3-parts [2].

In 1846, Kovalevsky accompanied the Egyptian engineers to the Urals, sent to Russia by our Muhammad Ali [3] to study mining, and in 1847, he traveled to Egypt to set up gold mining there. He used this trip to provide services to the young Russian Geographical Society, to which he was elected the same year: in 1847-1848.

Kovalevsky conducted geographic and geological research in Northeast Africa, the results of which he was one of the first to indicate the correct geographical location of the sources of the Bahr-el-Abyad / White Nile river. [4] Kovalevsky described this expedition in his book “Journey to Inner Africa” [5] in 2 parts.

Based on materials collected by Kovalevsky during his visits to Beijing to 1849-1851, he compiled a description of Mongolia and China "Journey to China" [6] in 2 parts of [7].

With the participation of Colonel Corps of Mining Engineers Kovalevsky 25 July (6 August) 1851 was concluded Guldzhinsky treatise [8]. Under this agreement, Russia received the right to organize in Kuldzha (Or, the current Inin. - P.G.) and Chuguchak (Tarbagatay, the current Tacheng. - P.G.) trading posts and appointed consuls there. [9] By setting the start of regular trade with Western China, the treaty contributed to the later acquisitions of Russia in Turkestan.

In 1853, in connection with the Turkish attack on Montenegro, Kovalevsky was sent there as a Russian commissar. For his successful actions in the Balkans, Nicholas I granted him a precious snuffbox. 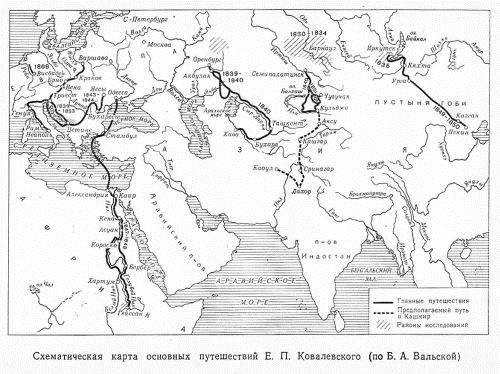 During the Crimean War in 1853 – 1855 Kovalevsky was in the army of Prince MD. Gorchakova. Consisting at the headquarters of the commander in chief, he participated in the retreat of the army from the Danube and the defense of Sevastopol. Kovalevsky reflected his analysis of the events of that time in the book The War with Turkey and the Break with the Western Powers in 1853 and 1854 [10].

At the end of the Crimean War, which had severe military and political consequences for Russia, Emperor Alexander II, who took the throne in 1855, changed the leadership of the Foreign Ministry. In 1856, instead of the conservative Chancellor KV Nesselrode was appointed a talented diplomat A.M. Gorchakov, and Kovalevsky - Director of the Asian Department. At the same time, Kovalevsky was an assistant to the chairman of the Russian Geographical Society, becoming a corresponding member in 1856, and an honorary member of the Imperial St. Petersburg Academy of Sciences in 1857.

The appointment of Kovalevsky as director of the Asian department was one of AM's successful steps. Gorchakova. The activities of this division of the Ministry of Foreign Affairs immediately revived. Kovalevsky, an energetic and enterprising leader, spoke in favor of carrying out a national foreign policy, for its activization, especially in the Middle East and the Balkans [11].

Since the main focus of his diplomatic activity is A.M. Gorchakov gave the European powers, the role of Kovalevsky in the definition of Asian politics was especially great. With his assistance, three diplomatic missions were sent to Asian countries that carried out extensive research and intelligence work: N.V. Khanykov led the mission to Persia and Afghanistan, N.P. Ignatiev - to Khiva and Bukhara, Ch.Ch. Valikhanov - in East Turkestan [12].

The most important success of the Eastern direction of Russian diplomacy at that time was the settlement of relations with China, and, above all, border issues. As a result of the conclusion of the Aigun Treaty and the Tianjin Treaty with the Chinese side, and the Peking Supplementary Treaty in 1858, vast territories were attached to Russia in the Far East: most of the present Primorye Territory, most of the Khabarovsk Territory and the Amur Region. [1860] In a letter to A.M. Gorchakov from 13 November 27, N.N. Muravyov-Amursky wrote: “Now we legally possess both the beautiful Ussuri region and the southern ports, and have acquired the right of land trade from Kyakhta and the establishment of consulates in Urga (the former name of Ulan Bator (Mongolia). - PG) and Kashgar ( Kashi. - PG). All this without the shedding of Russian blood, one skill, perseverance and self-sacrifice of our envoy [1860], and the friendship with China is not only not broken, but fastened more than the former ”[14].

Kovalevsky maintained close ties with many Slavic leaders and paid great attention to the Balkan issue. He viewed the position of the Balkan peoples as “slavery, shameful even in medieval times,” and advocated their liberation with the support of Russia [16].

A contemporary of Kovalevsky, publicist and traveler M.I. Venyukov assessed his activities this way: “In a difficult time, Kovalevsky became the director of the Asian department; The unfortunate Crimean company and the Paris world greatly undermined the influence and weight that Russia used in the East in the past ... Kovalevsky owes undoubted merit that during this difficult time he managed to maintain the prestige of the Russian name among the eastern and western tribes and thereby weakened the moral significance of the Parisian world in international relations "[17].

In August, 1861, Mr. Kovalevsky, left the Foreign Ministry in protest against the use of repressive measures against progressively-minded students. Despite this, he was appointed as a senator and member of the Council of Ministers for Foreign Affairs [18] as a lieutenant general.

Thanks to the scientific foundations laid by Kovalevsky when he was director of the Asian department, Russian Orientalist diplomats took an active part in the preparation and work of the Third International Congress of Orientalists held in St. Petersburg at 1876. The duties of the Secretary General of the Congress were performed by the ex-vice-director of the Asian department of the Ministry of Foreign Affairs, the orientalist F. R. Osten-Saken. [19]

Subsequently, Kovalevsky’s farsighted activities were embodied in the successes of Russian diplomacy and Russian weapons: in joining Russia to Central Asia in 1865-1895, countering the political aspirations of Great Britain, and winning the Russian-Turkish war 1877-1878. and, as a result, in restoring Russia's influence in the international arena.

Based on the article by Pavel Gusterin “E. P. Kovalevsky is a diplomat and orientalist ”(Questions of History. 2008, No. 8).