"Swifts" and "Russian Knights" are ready to leave the army 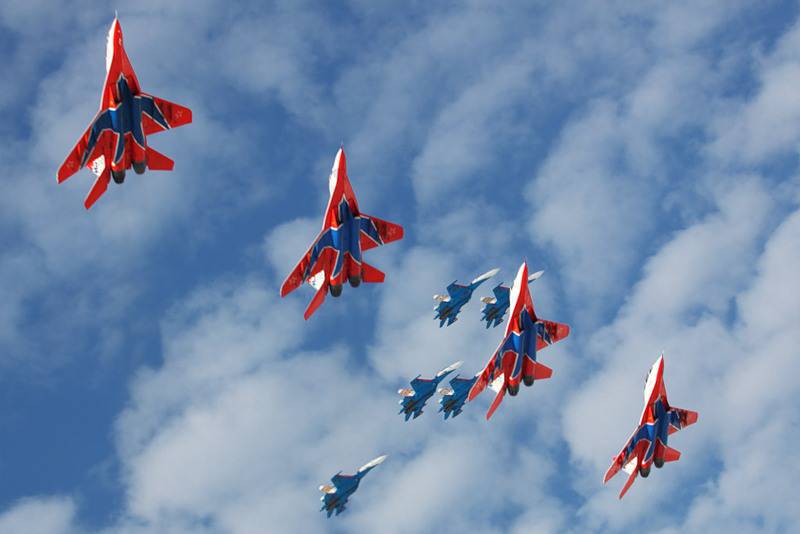 Combat pilots from the Strizhi and Russian Knights aerobatic teams are ready to part with military service and focus on demonstration flights. The pilots themselves, who are actively preparing for MAKS, told Izvestia about this. Since it is forbidden for the military to communicate with the press without management sanctions, we do not publish their positions and names.

One of the pilots told Izvestia that replacing military service with civilian service in the first place would have saved pilots from participating in combat training activities that are mandatory for all military pilots:

- We, like all pilots of the Air Force, carry out the entire range of flights and firing as part of combat training - we fly in combat formation, we throw bombs on landfills, we launch rockets. This, of course, is interesting, but it distracts from the preparation of flight programs and spends the resource of aircraft.

According to him, the civil service would have saved them from the delivery of standards for physical training, mandatory for all military.

- The most important thing is to have a decent salary and the ability to fly. And in epaulets or without - this is already the tenth case, - the pilotechnik shared his thoughts.

Another pilot noted that the preparation and maintenance of the aircraft is so troublesome and costly that no other agency, except the Air Force, can handle it.

- If you take us out of the Air Force - where? Who will set tasks for us? Who will ensure the health and refueling of aircraft? “I don’t know any other department that will pull it all,” the pilot said.

His ground counterpart from the Display Center aviation technicians noticed that the aircraft maintenance and fuel supply system can function without failure only in the Air Force. In addition, if you remove epaulettes from the pilots, there will be problems with their admission to flights on military vehicles.

- Just because no one civilian at the helm of the fighter will not let. There must be some status that would allow the guys to fly without military vehicles. But in order to create such a status, you need to shovel such a quantity of papers that practically all of this is impossible. Though, of course, everything is possible in our country, - the officer noted.

Rumors of the disbandment of the Russian aerobatic teams appeared last week. And although they were refuted by the Minister of Defense Anatoly Serdyukov and the Commander-in-Chief of the Air Force Alexander Zelin, the future of the Swifts and the Russian Knights remains vague - they can be dismissed from the Armed Forces and left in the service as civilian employees of the Ministry of Defense, as they leave only those involved in the destruction of the enemy. All the rest are outsourced and civilian positions.

At the beginning of the week, Zelin hinted at the possibility of the release of the pilots "Swifts" and "Russian Knights" from the combat strength of the Russian Air Force.

“We need to understand, either they will be military pilots, or they will be pilots,” said the commander-in-chief of the Air Force, evading the answer to the direct question of Izvestia, will the pilots remain in the Air Force or be discharged from military service.

- In other states, all pilots training tasks have been removed. And they are engaged in this particular program. Therefore, it is clear that we will be making some adjustments here somewhere, ”Zelin explained the range of throwings of the military leadership of the country.

At the headquarters of the Russian Air Force, Izvestia was informed that no decisions had yet been made on the withdrawal of pilots from the Air Force or on changing their military service conditions.

Now both Strizhi and Russian Knights are part of squadrons as part of the Aviation Display Center, which, in turn, is included in the 4-th State Center for Training Aviation Personnel and Military Tests of the Russian Air Force, located in Lipetsk.

Former Air Force commander Pyotr Deinekin, who at the beginning of 1990's made the decision to create Russian Knights and Swifts, is sure that pilots must remain in battle formation.

- Without the skill of piloting can not be a successful combat pilot. Therefore, the experience of the "Swifts" and "Russian Knights" is invaluable for combatant pilots of the Air Force. In addition, these groups perform the most important ideological function - they demonstrate to the world the possibilities of Russian military aviation. To destroy this tradition is unacceptable, - said Deinekin.

According to him, the cost of maintaining pilotazhnikov-crumbs compared with the cost of the state for the army and navy. And the benefit is obvious: thanks to the demonstrative flights of the Swifts and Russian Knights, Russia managed to sell several hundred combat aircraft abroad.

"Swifts" and "Russian Knights" will rise into the sky on August 15 during the opening of the International Aerospace Exhibition MAKS-2011 and show their famous aerobatics program. Two years ago, during its preparation, the commander of the “Russian Knights”, Igor Tkachenko, crashed. In the group they say that he was very worried about the plans of the military leadership to relocate the “Vityazi” to Lipetsk.

Ctrl Enter
Noticed oshЫbku Highlight text and press. Ctrl + Enter
We are
The action “Military service under the contract is your choice!” In Rostov-on-Don: future contract servicemen, exhibitions and “Russian Knights”
Military Reviewin Yandex News
Military Reviewin Google News
10 comments
Information
Dear reader, to leave comments on the publication, you must sign in.