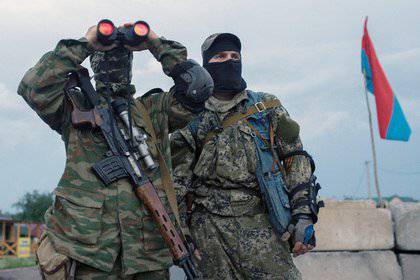 November 2 in the LC and the DNI held the first elections for these unrecognized states. They passed in a tense situation, with periodic truce violations and international pressure. However, everything went quite well - with good organization, high turnout and, most importantly, without serious accidents. The elections actually legitimized the leadership of the republics. The head of the DPR was the current Prime Minister Alexander Zakharchenko, and the LNR was headed by Igor Plotnitsky.

Ukraine’s reaction to the elections was hysterical, which, of course, was to be expected. President of Ukraine Petro Poroshenko has already hurried to declare the promised “adequate” answer - today (4 November) the National Security Council will consider abolishing the law on the peculiarities of local self-government in certain districts of Donetsk and Lugansk regions.

In fact, this means a complete cessation of all negotiations between the conflicting parties. If there is at least some logic in the actions of the leadership of Ukraine, then the next action after the abolition of this law should be a withdrawal from the truce and an attempt at military revenge. Otherwise, it means freezing the conflict with the transformation of the LPR and the DPR into something similar to Transnistria, Nagorno-Karabakh, etc.

Another thing is that, unlike Transdniestria, the republics have a common border with Russia and a huge population for the unrecognized republics (about 5 million people) and industrial potential (also working mostly in the Russian Federation). In this situation, these formations are unlikely to “hang” for a long time in an unrecognized form. And with the final success of the formation of these two new states (the standard of living and stability is higher than in Ukraine), several more regions of Ukraine will certainly want to join the project of New Russia. Essentially this will mean the end stories the state under the name of Ukraine (in the form we represent it), since the already formed armed forces of the LPR and DPR and the flow of new volunteers will immediately come to the aid of the new rebels.

The logical way, which means a new round of active military clashes, also does not bode well for Ukraine. Its armed forces will be waiting for an offensive campaign in a territory with a hostile population and in winter conditions. And all this with an acute shortage of finances and without any particular advantage in military equipment, which the "successful" APU managed to lose in battles with irregular units of the LC and the DPR. By the way, the armed forces of the unrecognized republics started a war with several hundred rifle and anti-tank units. weaponsand finished it with tanks, BMP and artillery, not much inferior in quality and quantity of APU. The very same armed forces of Ukraine closer to the signing of the ceasefire began to withdraw from conservation and restore the very old equipment. The country's air force suffered the most severe losses, having practically lost its combat effectiveness.

It’s not hard to guess what the resumption of the active phase of the military conflict can lead to in this situation. Losses of the advancing party may be several times higher than during the summer campaign. You will not have to hope for any help from the local population in difficult winter conditions. The actions of reconnaissance and sabotage groups and partisans that disrupt the supply of troops with fuel, food, clothing and ammunition in such a situation can lead to frostbite among the personnel and the mass of non-combat losses. An even greater decline and so low morale of the soldiers of the Ukrainian Armed Forces will probably lead to mass desertion.

Unfortunately, for the population of the LPR and the DPR, there will also be little good - only those who come to their senses will find themselves in complete humanitarian catastrophe, since there are no doubts that the Ukrainian Armed Forces will hit civilian communications again.

As far as the armed forces of the LC and the DPR can advance, if they can organize a counterattack, it is difficult to predict. However, it is clear that the threat of losing Mariupol and Slavyansk will arise before the APU rather quickly.

For the current authorities in Kiev, such a scenario can be fatal. It is unlikely that they will be able to stay in their chairs after a repetition of shame, and even on a larger scale. In addition, it will no longer be possible to write off what happened to the unreadiness and "transitivity" of the government. The economic consequences of renewed conflict will also be dire.

From the above, we can conclude: the termination of negotiations and the breakdown of agreements with the LC and the DPR will be another blatant mistake of Kiev in any scenario - both when the conflict turns into frozen and when the war resumes. In fact, Ukraine finds itself in a stalemate situation, signifying a likely further disintegration of the country — either slow or fast.

Another thing that causes little doubt is that the Western sanctions against the Russian Federation in any of the above options for the development of the situation will not be lifted for a long time, and perhaps even toughened. Perhaps this is the real purpose of Kiev puppets, whom the fate of their own state, apparently, has long been no longer interested. From the very moment of coming to power, all they do is take steps to break up their state. It suffices only to recall that initially the population of the former Donetsk and Lugansk regions required only small preferences — the official Russian language in their territories and the election of governors. What led the criminal actions of the Kiev authorities, we all know very well.