"Ash" for the Russian fleet 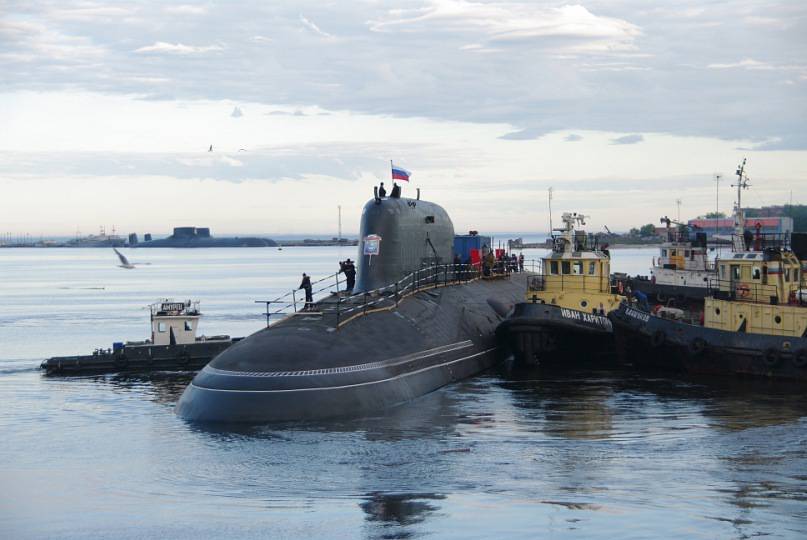 The USSR simultaneously with the USA in 1977 began to create a new look of nuclear submarines of the 4 generation. It was supposed to create several types: anti-submarine, multipurpose, anti-aircraft. Later, we limited ourselves to working on a single multi-purpose submarine project, but capable of solving a wide range of tasks. Designer of the new submarine was the Malakhit design bureau, which at that time had a wealth of experience in creating successful multi-purpose submarines.
The new submarine, created by the project 885, received the secret code "Ash" (NATO - "Gra-nay"). The laying of the lead ship under the name “Severodvinsk” took place at the end of 1993 in the city of Severodvinsk at the enterprise Sevmash. Soon, due to insufficient funding, construction slowed down.

The new submarine, created by the project 885, received the secret code "Ash" (NATO - "Gra-nay"). The laying of the lead ship under the name “Severodvinsk” took place at the end of 1993 in the city of Severodvinsk at the enterprise Sevmash. Soon, due to insufficient funding, construction slowed down.

Submarines project 885 built on a single-shaft scheme. The strongest case from special steel. Nuclear power plant submarines class "Ash" refer to the closed reactors 4-th generation, which uses an integrated layout scheme. The advantage of this arrangement is the localization of the embedded coolant of the primary circuit in a separate monoblock case, as well as the complete absence of nozzles and pipelines of considerable diameter. Such a scheme involves the use of equipment that has ultra-high reliability. According to a number of specialists, new unique ship reactors will be able to serve for much longer time without additional recharge than they are used now. It is known that the existing power plants have the ability to operate 25-30 for years. In other words, the life of a nuclear reactor is comparable to the life of the submarine itself. 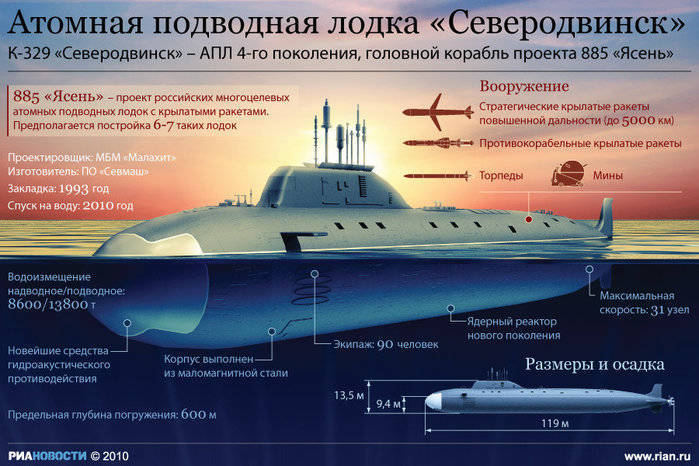 The exact date when the Severodvinsk, the lead ship of a series of new submarines will go to pass the "final examinations" in the White Sea, is not advertised in advance, but they no longer make any special secret of this. "Expect news in the 2-th half of August," said the administration of the city of Severodvinsk, which established full official patronage over the crew of the ship of the same name with the city. An agreement on this was signed in December 2009, and the document was signed by Mayor of Severodvinsk Mikhail Gmyrin, the commander of the combat crew of the submarine, Captain I rank Serey Mityaev, as well as the official representative of the Sevmash enterprise. And in July, 2010, the APRK "Severodvinsk" was launched to carry out construction works and the first mooring trials. Here are the main TTX submarines of the 885 project: the maximum length is 120 meters, the maximum width is 15 meters, and the draft is 10 meters. Maximum displacement - 11800 tons. Submarine cruising speed - 30 sea knots. The crew is a 85 man. The submarine is equipped with a rescue pop-up camera for the entire crew.

“This is the first multi-purpose submarine of the fourth generation, and it’s quite symbolic that it is named after your beautiful city,” said Russian President Dmitry Medvedev, who specially visited the northern shipyard to attend the launch ceremony, addressing the residents of Severodvinsk. 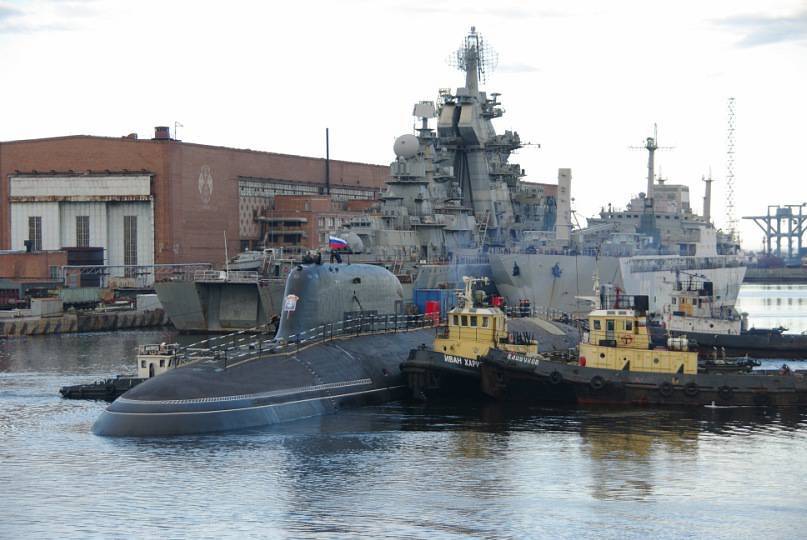 The construction period, which was a record for almost 18 years, was the result of an unprecedented and drastic reduction in defense orders and the collapse of research and production cooperation directly in military shipbuilding. Many other significant factors, both objective and subjective, have been added here.

However, anyway, the modern ship is afloat, the necessary outfitting work has been completed, the combat crew has been trained. According to Vladimir Pyalov, the general designer of the Malakhit SPMBM, the readiness of the submarine cruiser is estimated at about 98,9 percent. Complex mooring trials are now being completed. Literally after this the first access to the open sea will follow. And not just an easy walk, but an intense test program of running capabilities, calculated for a period of two months.

Such a long birth of the first “Ash”, as its creators point out, is connected not only with the economic difficulties that have arisen in the country, but also with fundamentally new weapons and architecture of the submarine. Severodvinsk carries a powerful armament complex onboard, which includes supersonic cruise ballistic missiles Onyx. It combines the qualities of a high-speed and unobtrusive torpedo submarine with the combat capabilities of the missile cruiser, to which the dead Kursk belonged. The submarine also received the latest navigation and communications complexes, equipped with a fundamentally new and unique in its characteristics nuclear power plant. Observers point out that Severodvinsk differs from previous missile submarines, including the 949A and 971 projects, both in terms of the striking effect of the weapons on board, and in size, and technical capabilities. Given these indicators, we can conclude that the 885 “Ash” project is not intended for the upgraded replacement of any previous outdated series, but as necessary fills the existing “niche” in the underwater defense of the state. Such an extremely “non-standard for Russians” version of the approach to one’s own defense is very alarming for foreign analysts. 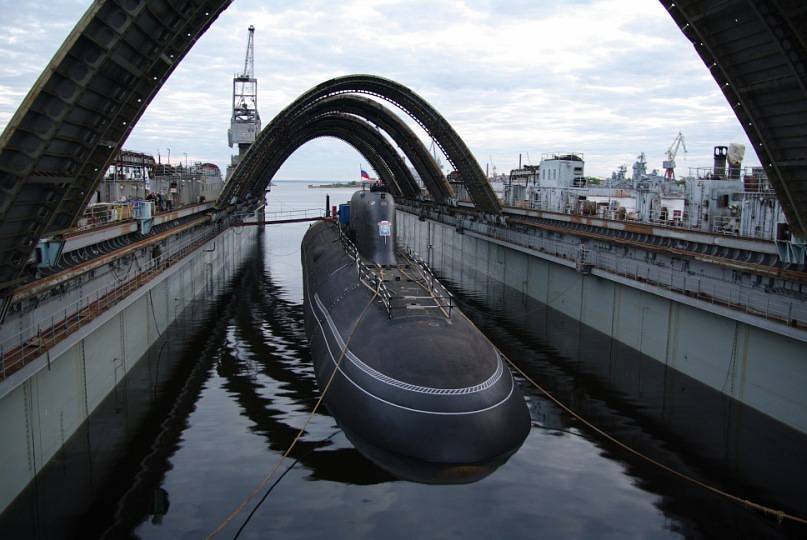 Western experts suggest that Yasen-class submarines, equipped with subtle, high-precision cruise missiles, will be able to take on a significant portion of non-nuclear deterrence, while remaining a very serious threat to enemy submarines and transport and warships.
The crew of the submarine "Severodvinsk" was formed on the basis of the eleventh division of the submarine Northern fleet In 2005, he studied at the special 270th Navy Training Center located in Sosnovy Bor. In October 2009, the crew members from the Zapolyarye arrived at the base in Severodvinsk and for eighteen months, together with the delivery crew, were preparing their submarine for entry into the Russian Navy.

We are in Yandex Zen
Submarines of the project "Ash"
Lady of the depths
15 comments
Information
Dear reader, to leave comments on the publication, you must to register.