November 5, 2014
49
At the last exhibition of weapons and military equipment "Interpolitex-2014" domestic and foreign organizations presented a number of new developments. At one of the event booths, a prototype of the Patrol armored car was shown. This machine, created on the basis of the existing machinery units, is intended for various departments of the Ministry of the Interior that need vehicles that protect the crew and the goods being transported.

The basis of the new armored vehicle is the KAMAZ-43501 chassis, a representative of the Mustang family of vehicles. In the variant, which is the base for the Patrol armored car, this chassis with the 4x4 wheel formula should receive a Cummins ISB6,7-250 diesel engine with 261 horsepower. The engine is connected to the 9-speed ZF9S1310 gearbox. All-wheel drive wheeled chassis has a dependent suspension, made on the basis of semi-elliptical leaf springs.

One of the main objectives of the development of the KAMAZ-43501 project was to create a truck with reduced dimensions. So, in comparison with the base KAMAZ-4350, the updated car has a smaller wheelbase (3670 mm) and a less high floor of the loading platform. This feature made it possible to use the KAMAZ-43501 chassis as the basis for an armored car, since the specifics of using such technology imposes certain restrictions on its appearance.

On the base chassis installed a new armored hull bonnet layout. The body of the Patrol machine is proposed to be welded from sheets of armor steel А3. The base case protection is declared at the level of 5 class according to national standards. Thus, the crew and units of the machine are protected from 7,62-mm bullets of rifles and machine guns (without an armor-piercing core). The hull is divided into two parts: a hood that protects the engine, and a flight deck with a driver’s workplace and a cargo-passenger compartment.

The engine cover with a hinged cover protects the power plant from firing from the side and top. In the front wall of the hood provides windows for engine cooling. On the sides of the hood there are blinds for hot air. The front part of the car is equipped with a developed bumper of a characteristic design. There is a set of lighting equipment.

Seats for the crew and cargo are in an armored hull. 10 seats, including the driver and commander, are in total volume protected by armor. The driver and commander are located in front of the armored hull. The driver has a set of controls for various systems of the machine. The photographs of the first Patrol armored car are not fully trimmed on the dashboard and nearby units. Nevertheless, this can be attributed to the features of the construction and improvement of the prototypes of any technology.

Armored "Patrol" must carry up to eight fighters with weapons and equipment. To accommodate them in the middle and aft parts of the armored hull, chairs are installed with a fairly simple design: metal frames with textile backs and seats. If necessary, the chairs fold down and take up less space. This design of the seats allows you to transport not only people, but also relatively large loads.

For landing and leaving the Patrol car is equipped with a set of doors and hatches. The driver and the commander have their own doors in the sides. On the starboard side, behind the commander’s door, there is another door that the paratroopers can use. A door is provided in the hull's stern sheet. In addition, there are six hatches in the roof: two above the driver’s and commander’s places, four above the troop compartment.

Like other armored cars built on the basis of trucks, the Patrol has a rather high cabin. For ease of landing, there are steps and a tubular bumper through the aft door, which can also be used for lifting into the cabin. On the sides of the hull, between the wheel arches, there are drawers covering the fuel tanks. On their side surfaces there are steps for lifting into the cabin when landing through side doors.

Survey and observation of the road or the surroundings are provided with a set of windows equipped with bulletproof glass. The driver and the commander have a large windshield and trapezoidal glazed doors. In the sides of the troop compartment there are six (three on board) square windows with embrasures equipped with armored dampers. With the help of these windows, the landing party can monitor the situation and, if necessary, fire from personal weapons.

For operation in winter conditions, the armored car Patrol is equipped with a Planar air heater. This device is connected to the electrical system of the base car and, using diesel fuel, heats the cab. The heater is mounted on a special metal stand between the starboard doors.

The armored hull, 5 compliant protection class, was heavy. For this reason, the gross weight of the Patrol armored car reaches 12,7 tons. The proposed 261-strong engine for use should provide maximum speed on the highway to 100 km / h.

The future of the project “Patrol” is still unknown. A new armored car is proposed for arming the units of the Ministry of Internal Affairs, primarily the internal troops. The specificity of the work of this structure is such that many of its units need vehicles with high protection characteristics and appropriate mobility. Apparently, the car has not yet been tested and therefore its fate is unknown. However, in the existing form or after certain modifications, the armored car “Patrol” may become the subject of an order from the Ministry of Internal Affairs. 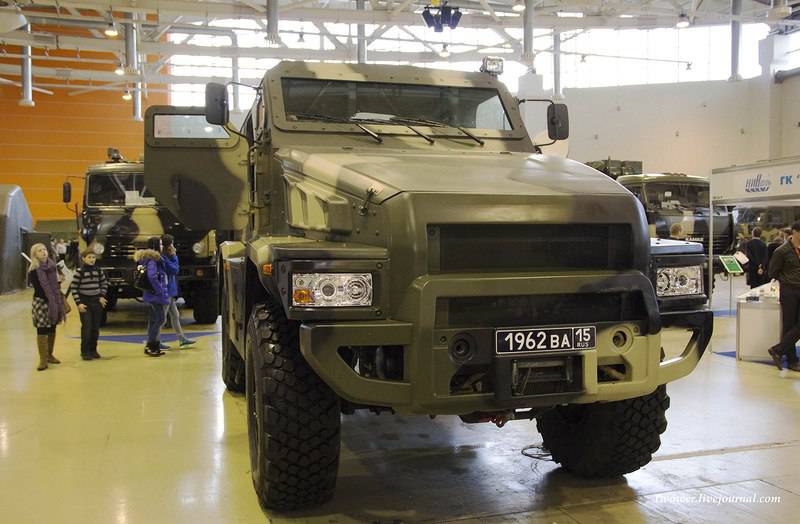 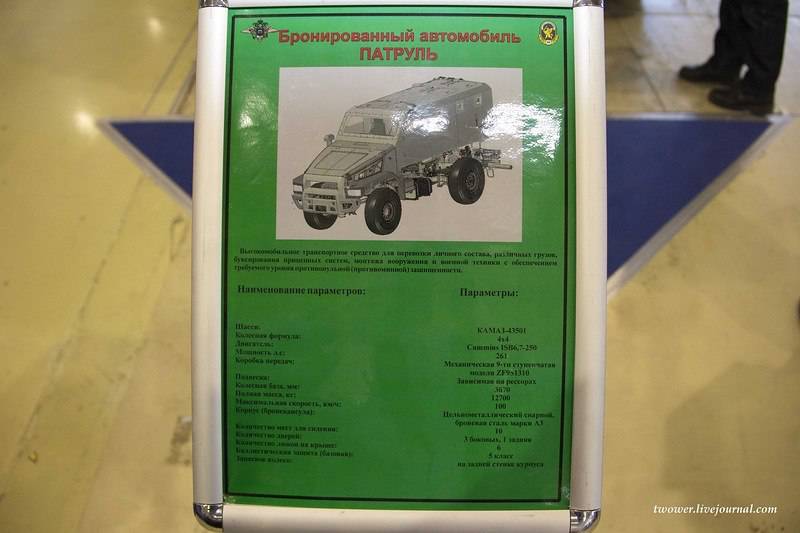 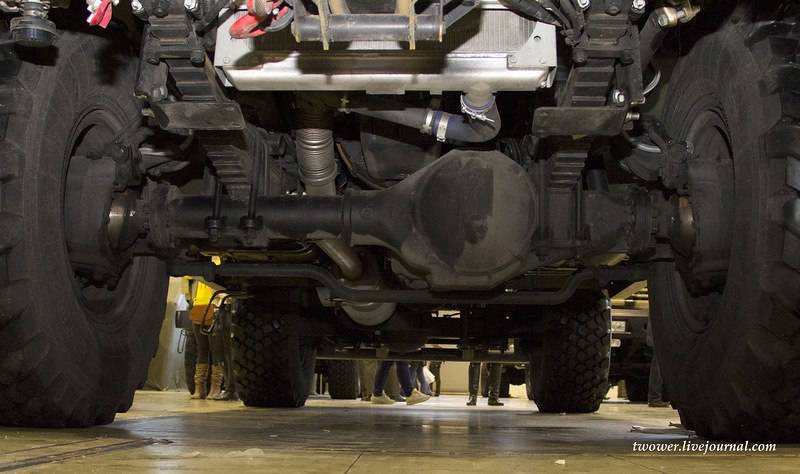 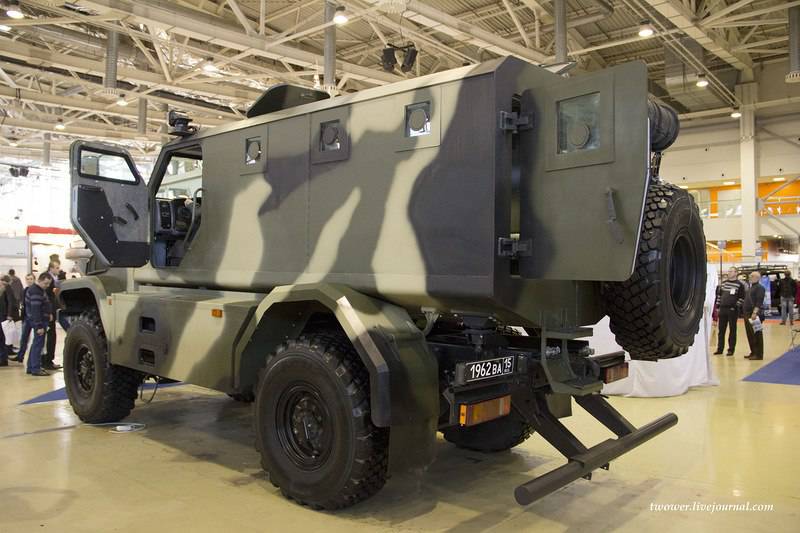 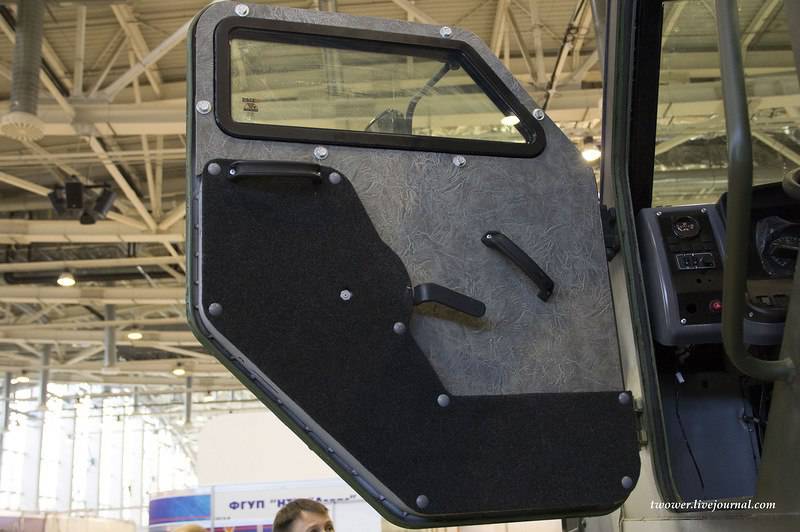 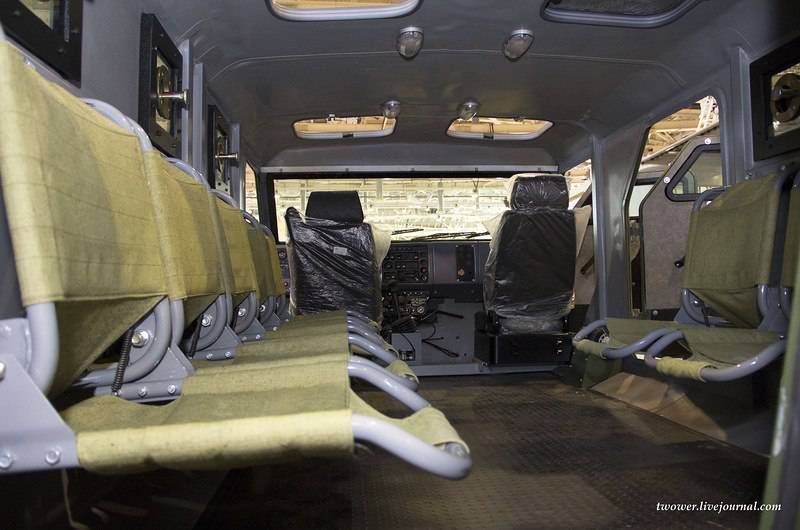 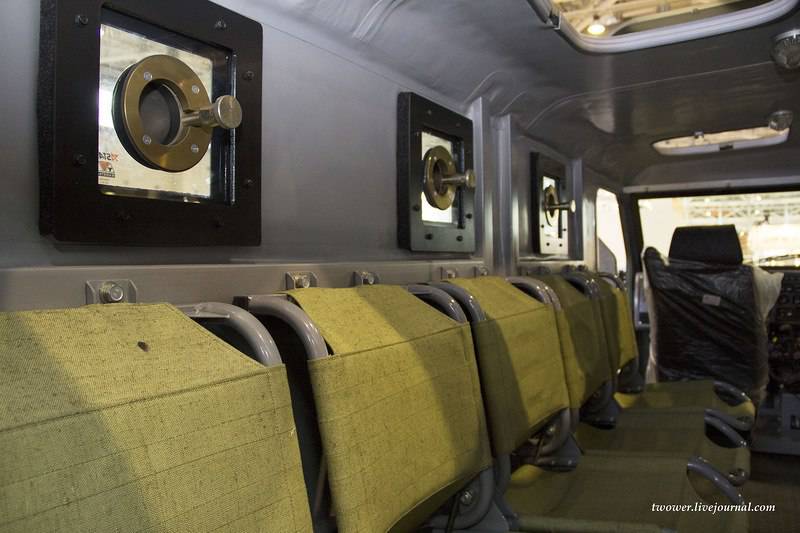 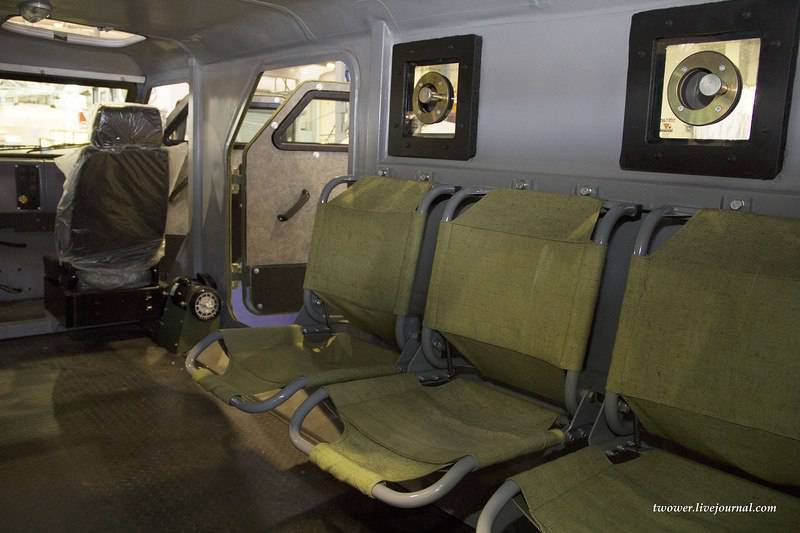 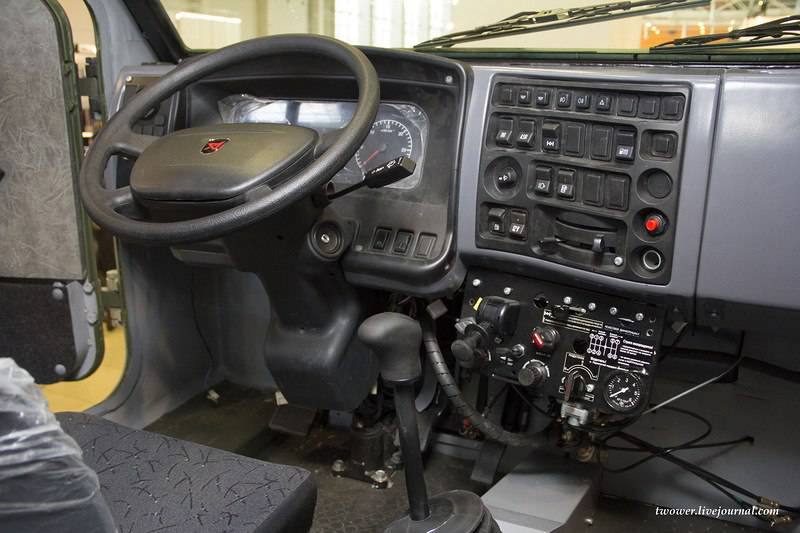