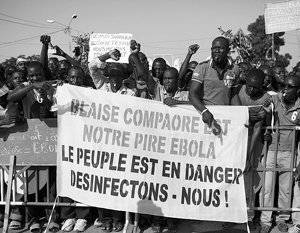 The regime of yet another African dictator, the President of Burkina Faso, Blaise Compaore, hangs in the balance: parliament is already in flames, and the television center is in the hands of the opposition. The revolt of the people, caused by rising prices and Kompaore’s desire to extend its 27-year rule, is fraught with another outbreak of Islamic extremism, but it can be an act of retaliation to the traitor who killed the legendary “African Che”.

The “black spring” is raging in Burkina Faso, as the opposition calls its fight against President Blaise Compaore. They say the success is phenomenal: in Ouagadougou (the capital of the country) the number of protesters has exceeded half a million. At first, the protests were pinpoint, then people headed to the parliament building and set it on fire. Parliament in this stories for them - a symbol of evil. After all, it was the parliament that was supposed to adopt amendments to the constitution, which would give Compaor the opportunity to be re-elected for another term and extend his rule, which lasts for 27 years.

Police responded with tear gas, then the combat weapon, at least five people died in a day, but this did not stop the protesters. Along with parliament, the mayor’s office and headquarters of the ruling party are ablaze, the building of the television center has been seized, and the broadcasting of the state television channel has been stopped. Next in line is the presidential palace: according to the BBC, it is already cordoned off, the city is waiting for an assault.

In fact, the opposition has already won: the government promptly withdrew the law, which caused the rebellion, after which Compaore dissolved the government, introduced a state of emergency and expressed readiness for "any negotiations." But, apparently, the protesters will not stop at this, since they do not wish to endure Compaore until the 2015 year, when, according to the laws in force, his last presidential term expires.

All this was already and also called “spring”: protests swept Burkina Faso at the same time that Tunisia, Libya, Egypt, Syria, and Yemen were flushed, that is, in 2011 (true, then French journalists used the term “Burkini spring”) . At first, the soldiers rebelled, dissatisfied with the delay in wages. Then the students, who responded to the mysterious death of a teenager in a police station. Farmers followed the streets (they were not satisfied with low purchase prices), businessmen (authorities closed dozens of small businesses because of rent delays), teachers (street protest became a logical continuation of the strike for them). There was shooting, there were victims. In the end, part of the metropolitan police switched over to the side of the protesters, but over time everything calmed down. Compaore, who fled from the capital at the very beginning of "spring", voiced a number of social promises, raised teachers' salaries, changed a dozen governors, put the popular intellectual in the prime minister's seat, Luc-Adolf Tiao, agreed to start negotiations on amending the constitution, and just in case wrote off the post of Minister of Defense. So did many of his predecessors. And no one helped.

By and large, there was only one alternative to the revolution in Burkina Faso - a military coup. After the people Mosi achieved autonomy from the metropolis - France, and then - in 1960 year - gained independence within the framework of the Upper Volta state, the power in the country never changed in a peaceful, voluntary and democratic way.

The first president, a prominent fighter against Western colonialism, Maurice Yameogo, instantly introduced a strict one-party dictatorship and healed the typical life of an African dictator: a harem of beautiful women and 99,9% in elections. He was thrown off by exactly the same “spring”, and the power passed to the military with the popular brigadier general Sangule Lamizana at the head. For a while, he returned democracy and civilian rule to the country, but fearing a rebellion, he returned to the dictatorship in order to be overthrown as part of a military coup by Colonel Saia Zerbo. He, in turn, lost power following the results of the right-wing coup of Dr. Jean Battista Oedraogo. The doctor was guided by France in everything, therefore he first made the rising political “star” prime minister — the military and the Marxist Tom Sankar, and then dismissed him himself and took him under arrest — as too radical in the eyes of Western partners. The power of the doctor ended, of course, with another popular uprising, coupled with a military coup, and the persecuted Sankara stood at the head of the country - one of the most famous and almost legendary African politicians of the second half of the 20th century.

Sankara really was a staunch Marxist, as well as those who are classified as “charismatic leaders” - the people simply adored him. Firstly, for modesty: Sankara moved on motorcycles and bicycles, transferred his presidential salary to an orphanage, revealingly hated luxury, and therefore refused to even have an air conditioner as an item inaccessible to others. Secondly, in fact accomplished transformations. Under him, civil servants refused expensive cars and costumes (they replaced traditional cotton tunics for these places), made public all their incomes and had to pay special taxes to special funds, the main source of replenishment of which, however, was nationalization.

It was under Sankara that free education and free medicine were introduced in the country, and generous funding (along with total vaccination of children and contraception popularization) showed impressive results - mortality was decreasing before our eyes, and the literacy rate of the population, on the contrary, grew rapidly. When it began the struggle with deserts, and the country began to plant forests. When it launched a huge program of construction of social housing and road development. Under him, the inequality of women was eliminated, and polygamy and forced marriage were strictly prohibited. And most importantly, Sankara did away with feudalism, which was the norm for the state: tribal leaders lost their special rights, and their lands were redistributed in favor of the peasants, which ultimately doubled the yield.

His ideal was Cuba, and the world press aptly dubbed politics "African Che." It was Sankara who renamed Upper Volta to Burkina Faso (in translation “the land of free people”) and was the first among African leaders to recognize that the AIDS epidemic started on the continent. And, although his regime can hardly be called democratic by modern standards (“the enemies of the revolution” were destroyed, the “harmful elements” were sent to forced labor on the fields, the electoral and judicial systems existed only nominally), did not resemble a typical African dictator. Even the cult of personality, which was obligatory in such cases (it was somehow introduced by every African Marxist leader), Sankar refused — he was loved sincerely and voluntarily.

But neither this nor the arming of the people through the "committees for the defense of the revolution" did not save Sankar. First, France, which is still very meticulously observing the life of the former colonies, and, secondly, neighboring countries, where dictators, traditional for these places, feared the popularity of Sankara, successes of Burkina Faso and, as a result, revolutions on their estates. The altercation with France and Côte d'Ivoire, the main trading partners, eventually became the formal reason for the overthrow of Sankara. The leader of the conspiracy is a close friend, the Minister of Justice and professional military Blaise Compaore, thanks to the rebellion of the garrison of which Sankara once came to power.

The body of the “African Che” (along with the bodies of a dozen closest supporters) was cut into several pieces and buried in an unknown place (the UN has previously and unsuccessfully demanded that Burkina Faso investigate this murder). The resistance of the “defense revolution committees” was brutally suppressed, and soon the new regime of Compaore — for the sake of greater stability — returned all privileges previously taken away to the military and officials, and canceled all social taxes (for housing, medicine, education). The money to strengthen the new government was also found quickly: state property was sold out, and France acted as a guarantor to the IMF to provide the country with a loan.

Posthumously discrediting Sankar at Kompaore, however, did not work: all the property of the killed person was reduced to several guitars (he used to combine his military career with playing in a rock band), bicycles and an old refrigerator. Three years after the “African Che” came to power, the World Bank recognized that it was possible to almost completely eliminate corruption in Burkina Faso. Now it is one of the most corrupt, socially disadvantaged and impoverished states in the world. That, however, did not prevent Kompaore (for the first time he was officially elected president in 1991, being the only candidate at the turnout in 25%) to occupy the highest position as much as all his predecessors combined.

In 2000, against the background of regular protests and under pressure from the West, the country's constitution (already the fourth since independence, almost every new leader passed its own basic law) was amended: the same person may hold the presidency for more than two five-year terms contract. Previously, the law allowed Compaore to rule forever, however, in fact, little has changed: the court decided that the current term for the head of state was “zero”, which means that he could be elected two more times.

As already stated above, it is likely that Compaore will not reach his highest position last year. On the one hand, it can be considered that justice has somehow triumphed (or rather, can triumph), and Sankara will be avenged. But there is another side. Behind this "color revolution" it is useless to seek out the "hand of the West" (Compaore had normal relations with the Western world, he met with Bush, international corporations were free on his lands), but the Islamic factor, apparently, should be taken into account. Yes, it is primarily social protests, spurred by rising prices. However, the country has its own Islamic radicals, the benefit of the overwhelming majority of the population is Islam, and Compaore is a Catholic by religion. And it cannot be completely ruled out that Burkina Faso will be dragged into the “corridor of Islamic terror”, which now extends from Chad and Nigeria to Syria and Libya.