Orders and medals of the Russian Empire. Order of the White Eagle

November 5, 2014
4
A number of awards of the Russian Empire had Polish roots. Such awards include, for example, the Order of the White Eagle. It is assumed that this award was established as early as 1325 by the Polish King Vladislav (the White Eagle is the main element of the coat of arms of Poland). The order was restored in 1705 by King Augustus II. In November 1712, the Order of White Eagle was entrusted to the future Russian emperor Peter I. After the partition of the Polish state, which occurred in 1795, this order remained the award of the Duchy of Warsaw (1807-1815), and after the Kingdom of Poland (1815-1831), according to the results of the Vienna Congress became part of the Russian Empire.

After the suppression of the Polish uprising and the deprivation of the Polish state of autonomy in 1831, Russian emperor Nicholas I ranked all the orders that existed in Poland, including the Order of the White Eagle. The full name of the new order sounded like this - the Imperial and Royal Order of the White Eagle. In this case, the appearance of the award, of course, there have been some changes. On the signs of the order, the Russian crown was replaced by the Russian one, and the order cross with the single-headed Polish eagle was imposed on the two-headed Russian eagle.

The special statute for the new Russian order was not approved, and at the same time it took a fairly high place in the award system - right behind the Order of St. Alexander Nevsky. The Order of the White Eagle was awarded to citizens of the Russian Empire for their military exploits or impeccable public service. In 1855, a slight change was made to the appearance of the order. For orders that were issued for military merit, began to attach crossed swords - through the middle of the star and on top of the cross under the crown. The motto of the order was the phrase: "For Faith, King and Law." 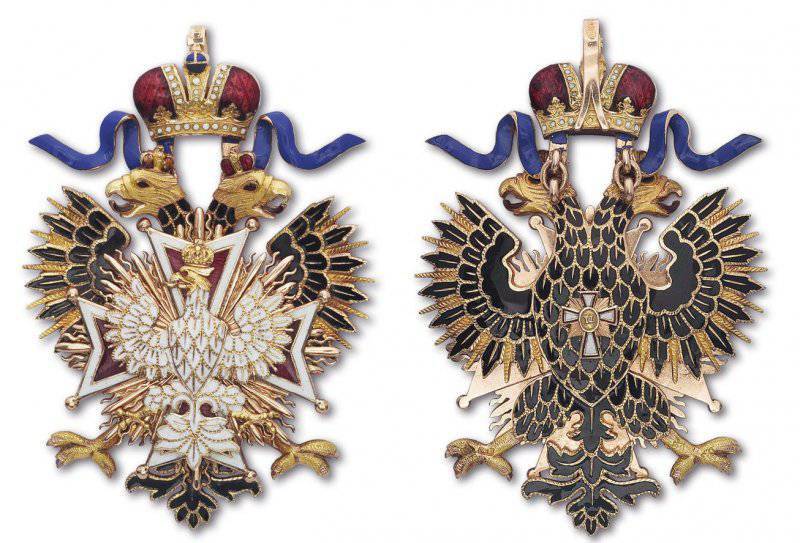 The Order of the White Eagle included the following signs: a golden cross, an eight-pointed star and a blue ribbon. The order was worn as follows: the star was fastened on the left side of the chest, and the cross was worn on a blue moire ribbon over the left shoulder. In the event that the awarded person already had the Order of St. Alexander Nevsky, the Order of the White Eagle (smaller) was worn around the neck on a special narrow ribbon, and in cases where the Order of St. Andrew the First-Called is on the chest. Before 1832, the ribbon was blue, from 1832 of the year - blue, and from 1879 of the year - dark blue, the width of the ribbon was 10 cm.

Badge of the Order - White single-headed eagle (Polish coat of arms), which is crowned with the Russian crown. A white eagle is laid over a four-pointed cross of red enamel with flared forked ends; it was made of gold. On the edges of the cross was enamel border. There were small golden balls at the corners of the cross, and the ends of the cross were connected by a golden semicircle. The Order of the Cross, together with the Polish Eagle, was placed in the middle of the double-headed eagle under the three crowns. On the reverse side of the sign was a Latin cross in radiance, covered with white enamel. Beginning with 1856, the order badge was produced with heraldic ribbons of blue enamel under the crown, to which the two-headed Russian eagle is attached.

The star of the Order of the White Eagle was eight-pointed, made of silver. In the middle of the star was placed the image of a fiery cross, possessing along the edges of three narrow stripes. The middle of these stripes was red, and the other two were gold. The motto of the order of Rgo Fide, Rege et Lege ”(For Faith, Tsar and Law) was placed around the cross on a broad band of blue. 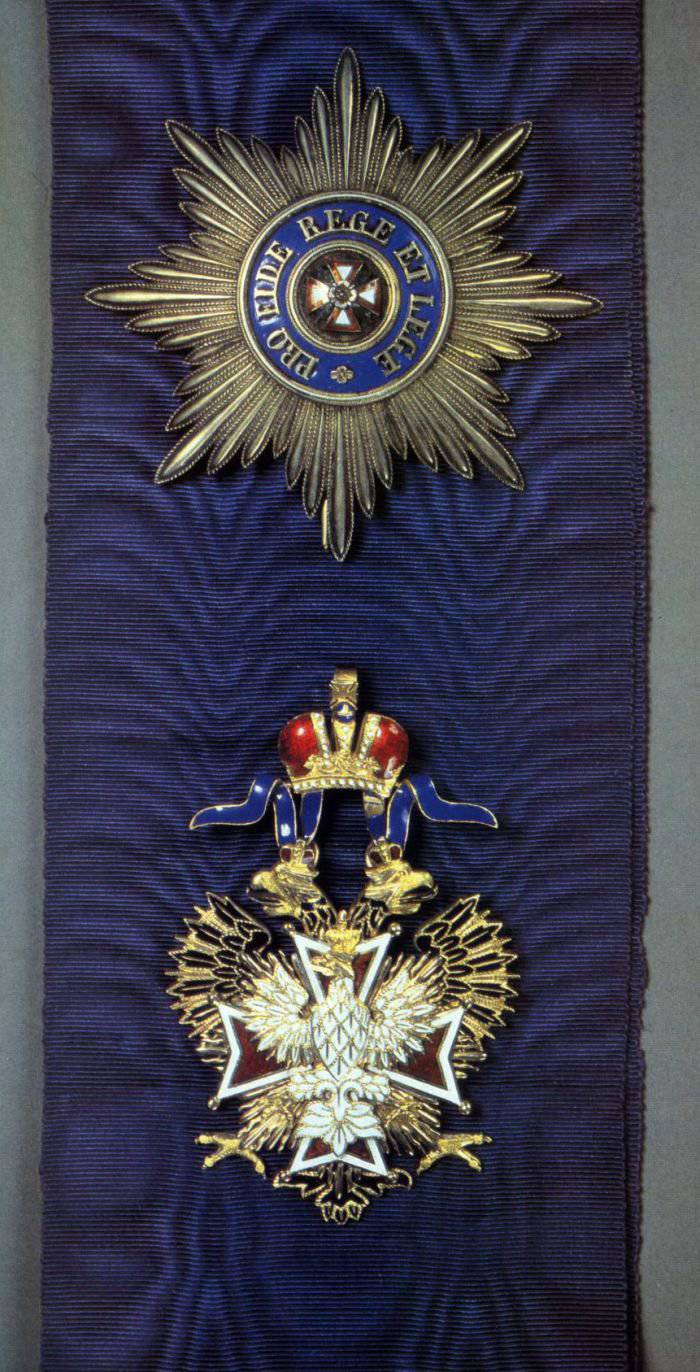 The Order existed in the Russian award system before the 1917 revolution of the year. The revolution that overthrew Emperor Nicholas II marked the end of the legitimate presence of imperial orders in the country. In this case, the Provisional Government sought to maintain the order in the award system. To do this, all the imperial awards were changed, all monarchical symbols were removed from their ranks, while reaching the point of absurdity. For example, revolutionaries changed the motto of the Order of the White Eagle “For Faith, Tsar and Law” to an ordinary laurel wreath.

Persons who were awarded the Order of the White Eagle, did not rely payment of pensions. This was one of his differences from the rest of the Russian orders. However, when it was handed over, it was necessary to pay a certain sum of money, which was sent to charity. This amount from 1860, the year was 300 rubles, and when he received the Order of the White Eagle with swords, his cavaliers paid 150 rubles. During the entire period of the order’s existence in the Russian award system from 1831 to 1917, 4018 awards were made the year, of which 549 people received this award simultaneously with the Order of St. Andrew the First Called. Even more 1000 people were foreign nationals. The order with swords was awarded only 143 times, and 27 people received this order, decorated with diamonds. After the October Revolution 1917, the order was retained by the house of the Romanovs as a dynastic award.