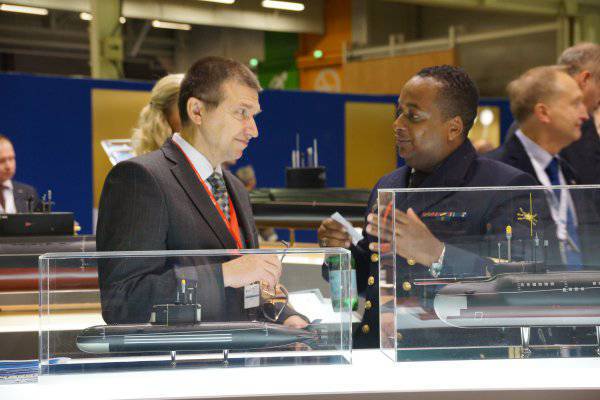 The international naval salon Euronaval-2014 in France showed sanctions by sanctions, and we are among the leaders in breakthrough technologies. The West did not expect this at all.

For the first time, Rosoboronexport shows surface ships and submarines abroad that are in no way inferior to their western counterparts. Moreover, we are leading in a number of projects.

The exposition of the Central Marine Design Bureau "Almaz" was a real sensation. Its general director and general designer Alexander Shlyakhtenko told Rossiyskaya Gazeta in an interview:

- What we are doing today really has no analogues in the world. The cabin has a lot of high-speed ships of small displacement. But it should be noted, the higher the speed of the ship, the more difficult its service, including combat.

At high speeds, the effect of a “washboard” occurs - the ship rushes as if over rocks, it is difficult for both people and mechanisms to withstand this for a long time.

And we have created a mechanized bottom using aviation technologies. Our Sobol interceptor patrol boat today has a speed of 52 knots, is not afraid of waves and is equipped with powerful weapons. At great speed and excitement, he goes like a car on the Autobahn.

The range of its navigation 700 miles, autonomy for five days. This is our pride. Neither in the West nor in the East there is nothing like that.

The exposition of Euronaval-2014 confirms this. The Navy and the Federal Security Service for their coast guard order these boats in large quantities. And their export potential is great.

Our other pride is the 20382 Tiger Corvette. He is recognized as the third in the ranking of the best corvettes of the XXI century. The Tiger project is without a doubt a breakthrough ship. It has powerful and balanced weapons, quite comfortable living conditions for the crew and excellent seaworthiness.

With it in our country began the era of the construction of new generation ships. The world's best corvettes, and this is the most important thing, we first equipped the Russian Navy. Four ships are already part of the Baltic fleet.

Now we offer "Tigers" for export. Interest in them in the world is growing.

There is even a DP-64 anti-sabotage rocket launcher. The ship may carry an Ka-28 anti-submarine helicopter or a Ka-31 long-range radar detection helicopter.

The cabin shows a mockup of a new amphibious assault ship "Moray". This fish can carry 24 tons of payload: 1 tank or 3 BTR, or 130 marines with full armament. Speed ​​- 55 knots, cruising range - 200 miles. These ships have already ordered South Korea.

The modernized "Murena-M" was created specifically for the universal landing ship of the "Mistral" type.

Another sensation in the Euronaval-2014 cabin is the St. Petersburg submarine Malakhit submarines. There are only two of them, but they were in the spotlight on the very first day.

Not surprising. Passions around the futile search by the Swedes for "Russian submarines" on their shores have not yet subsided. They even claimed that they had determined the type of submarine - this is "Piranha". Found nothing. But in the French naval cabin you can see them.

Baby boats with a predatory name became part of the Baltic Fleet at the end of the 1980 and immediately became a headache for the NATO naval forces. Alas, in the next decade they were written off, and then completely disposed of. Perhaps under pressure from the West. However, panic fear of them in NATO remained.

Now in "Malachite" at the new technological level several types of "Piranhas" are designed at once. These are sabotage boats for marine special forces and full-fledged combat "Piranha-T". They are designed to sail where small, and the most automated. The crew of the "Piranha" three people, and the "Piranha-T" - five. According to lead designer Igor Karavaeva, Piranha-T can also be managed by one person, because the level of automation is so high. They are also very quiet.

Armament "Piranha-T" - two mm 533 torpedo tubes, which can be placed and cruise missiles.

There are also outboard launchers for torpedoes of the 324 caliber mm - there are six of them. In addition, the submarine is eight minutes.

In the world of analogues again, no. And the Malachite exposition constantly had many sailors from other countries, including from Sweden. They looked and did not believe that submarines with such characteristics could be designed.

Projects of many of our ships are quite predatory names. Do not fall behind and foreigners.

Italians, for example, show, and in sections, the huge torpedo “Black Shark”. Assigned the name of the Russian military helicopter Ka-50. But this was not enough for them. And they brought a smaller-sized torpedo with the name “Black Arrow” and “Black Scorpion”. Even the towed sonar system was called the "Black Snake".

Naturally, all these products are painted black. There are also "Sea cats" and "Sea spiders".

On the whole, the Euronaval-2014 naval salon turned out to be more modest than the similar 2012 exhibition of the year. But there are some interesting novelties. First of all, these are conceptual projects of the ships of the near future, as well as numerous automated uninhabited underwater vehicles. The trend of designing ships with a minimum reflective surface remains. There are proposals even to hide artillery guns inside the tower and push them just before the opening of fire.

By the way, even in the age of missiles, artillery systems are experiencing in the fleet, one might say, a rebirth.

Today, these are quick-firing guns with very precise guidance. Small-caliber artillery is fully automatic with an abundance of optical-electronic target guidance and fire control systems. Our country is in the lead.

Russia shows 100 mm shipboard artillery A190, considered one of the best in the world.

Abroad, they were appreciated and, perhaps, it is they who will begin to re-equip ships of Soviet projects, of which there are many in India.

By the way, our exhibition stands are always very crowded. And business negotiations go all the day.

Sergei Ladigin, head of the Russian delegation of Rosoboronexport, said:

- many European weapons manufacturers are interested in closer cooperation with Russia, including on naval issues. In the current situation, such interaction is certainly complicated by the political agenda, however, we remain open to our partners and aim at a mutually beneficial dialogue. We consider participation in this exhibition as a good opportunity for “reconciling hours” and working out further steps.